Advanced Military Communications
INCOMING
INCOMING: COTM,
Communications On-the-Move (COTM) is an enabler. The technology allows those who protect, defend, and serve to be in constant communication with one another, with command structures, and support facilities, regardless of location. COTM affords “no-matter-where” communications for the warfighter. As part of this issue’s coverage, COTM is brought to the forefront. A number of subject-matter experts were queried regarding their analysis and expectations of COTM.
COMM OPS
COMM OPS: The Satellite—Fiber Connection,
by Paul Dujardin, CEO, Genesis Networks
For everything from training programs and videoconferencing to entertainment programming for soldiers, satellite transmissions play a prominent role in the military’s global communications strategy. While satellite will continue to be a critical transport mechanism for the military to deliver signals out of remote areas, in many situations, a fully managed, fiber optic network offers a superior option by offering lower latency, increased flexibility, and additional value.
COMM OPS: When It Comes To Satellites,
by Robert Bell, Executive Director, WTA
The leadership of the U.S. military is really hoping for a Hollywood ending when it comes to satellite. At least, that is the impression left from three days of government and military content at ISCe 2008, the California satellite show that ended June 12.
COMM OPS: Commercial COTM For Military Use,
by Jose del Rosario - Senior Analyst + Regional Director, Asia-Pacific, NSR
Communications-on-the-move (COTM), broadband-on-the-move, or next-generation mobile satellite systems, have been discussed for a number of years, particularly for military use. COTM generally refers to on-the-move systems of at least 60 mph with throughput levels of 2 Mbps for inbound and outbound traffic.
COMM OPS: Techniques For Managing Enterprise Transition,

by Rob Byrd and Earl Pedersen, SI International
Within the satellite industry, whether on the military or commercial side, the agency- or company-wide framework that incorporates all of the computing, information and management systems is known as the Enterprise Architectur (EA) or Solution Architecture. EA is the model for the operation and organization of a company, agency, command, and so on, as defined in various documents that deal with the structure and formation of various information systems or services.
COMMAND CENTER
COMMAND CENTER: Colonel Michael D. Sarchet,

The leader of the Advanced Extremely High Frequency (AEHF) satellite communications system delivery is Colonel Michael D. Sarchet. He is the Commander for the Protected Satellite Communications Group, Military Satellite Communications (MILSATCOM) Systems Wing, Space and Missile Systems Center (SMC), at Los Angeles Air Force Base. AEHF is designed to aid all warfighters by providing secure, survivable communications, no matter the level of conflict within which such needs to be employed.
COMMAND CENTER: Dave Helfgott, President and CEO, DataPath Inc.

DataPath Inc. is well known for establishing and maintaining communications anywhere in our globe, delivering total network control, even in the most extreme conditions and under the most urgent time frames. With their wholly-owned subsidiary, SWE-DISH, DataPath creates satellite and wireless based network solutions and mobile satellite communications systems that solve communications challenges. Based in Duluth, Georgia, U.S.A., the company operates via dozens of offices, distributor locations and field support bases around the world.
ACTIONABLE INTELLIGENCE
ACTIONABLE INTELLIGENCE: Wideband MILSATCOM—Has Spectrum Monitoring Arrived?,

by Scott Herrick - Director of Government Business Development, SAT Corporation
Persistence, on-demand, real-time Intelligence, Surveillance, and Reconnaissance (ISR) and the ability to deliver weapons without putting an aircrew at risk, are what typically come to mind when the subject of Unmanned Aircraft Systems (UAS) is discussed. This mindset is reinforced by operational successes in Iraq and Afghanistan as well as in non-combat and domestic applications, such as border security and disaster response missions (i.e., monitoring forest fires and assessing flood damage). Unless you are a communications specialist, or frequency manager, rarely do conversations gravitate toward the importance of the communications links that make UAS operations possible.
ACTIONABLE INTELLIGENCE: No Secrets From Satellites,

by Dr. Len Losik - Founder and President, Failure Analysis
Today, satellites provide essential services to the public and the military environs. Those services include communications, navigation, weather, and scientific information, which has raised the standard of living and daily use of technology in the United states to the highest level in the world.
ACTIONABLE INTELLIGENCE - Satellite Communications For Emergencies,

by Dr. Markus Werner - TriaGnoSys
When disaster strikes, such as an earthquake or a tsunami, co-ordinating a response is often hampered by lack of information, or the ability to communicate to emergency services, governments, and aid organizations. Without information about what is needed and where, support can easily become redundant while, conversely, others receive no help at all. A key use of new satellite equipment is as a communications’ center, to gather and map information and intelligence about the impact of the disaster, and to direct the recovery effort.
PRIORITY BRIEFING
PRIORITY BRIEFING... Army Signal Unit Integrates First Regional Hub Node, 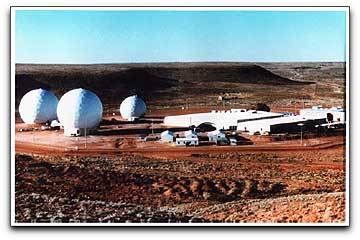 by U.S.A.F.’ Space and Missile Center’s History Office Los Angeles Air Force Base
The Space and Missile Systems Center is the birthplace and cradle of military space and the central hub of military space acquisition excellence. SMC’s mission is to deliver unrivaled space and missile systems to the joint warfighter and our nation, producing innovative, affordable, and operationally effective space systems of separate subsystems that could carry out different missions.