Highlighting a range of space industry activities, The Space Report Quarter 3 conveys the most pertinent and interesting findings of Space Foundation research and analysis conducted during the quarter.

These perspectives on commercial space revenue, STEM education, and emerging jobs provide key insights into trends that continue to shape the larger space industry and how it will continue to grow and evolve.

The global space economy crossed the $400 billion mark for the first time this year with revenues of $414.75 billion. Commercial space activity fueled much of that growth, with the largest single-sector gain coming from value-added services, which posted a single-year 20.5 percent increase in revenues.

Strong economic news in the space industry also was reflected in the second-quarter results of the The S-Network Space Indexsm. Of the 30 space-related companies it tracks, seven showed growth of 20 percent or more in Q2 2019. Overall, the index showed an increase of 8.7 percent and outperformed the two comparison indexes.

The full version of The Space Report Quarter 3 provides more detail regarding 2018 activities. For more in-depth and up- to-date information, The Space Report Online captures the latest and most accurate space industry data.

Both the report and database subscription are available for purchase. To join major aerospace companies, universities, research firms, and government organizations that are serious about gaining in-depth knowledge about the global space industry, see the end of this summary for purchasing details.

• Revenues from global commercial space activity in 2018 reached their highest levels ever, totaling $328.86 billion, an increase of 6.6 percent from 2017. Commercial revenue accounted for 79.2 percent of total global economic activity in space.
Starting in 2004, legislative mandates and private enterprise fueled a new era dedicated to space exploration and the involvement of private enterprises. From 2005 to 2018, those new efforts triggered a 13-year period of growth that resulted in a 162 percent increase in commercial space revenue.

• In 2018, value-added services, companies that receive and use satellite signals for a range of businesses including logistics and smartphone apps, contributed the largest portion of revenue in this sector, 43.1 percent, with $98.67 billion.
• Revenues from Direct-To-Home(DTH) television were close behind, providing 42.0 percent of total revenue in this sector in 2018, with $96.31 billion.

• Satellite television revenues were estimated to be $96.31 billion in 2018, based on data from the Satellite Industry Association, public filings, and industry reports.
• Revenue has been relatively steady in this area, decreasing less than 1 percent from the estimated total of $97 billion in 2017. Satellite TV providers are losing customers primarily to over-the-top services that provide on-demand content, like Netflix, Amazon Prime Video, and Hulu
• In the area of satellite radio, provider Sirius XM increased revenue by 6.4 percent over the past year, from $5.43 billion in 2017 to $5.77 billion in 2018.

Commercial Infrastructure and Support Industry
Commercial infrastructure and support industries accounted for $99.69 billion in revenue in 2018, which represented 30.3 percent of total commercial space revenue. This is 2.6 percent more than the $97.16 billion in revenue during 2017. The largest source of revenue in this area in 2018 was from ground stations and equipment, which accounted for $92.47 billion, or 92.8 percent, of total revenue in this category.

• From 2014 to 2018, the total manufacturing value of spacecraft/satellites launched each year increased almost 50 percent from just under $30 billion to $45 billion.
• The majority of that value in 2018 came from civil government and military sectors, but U.S. companies launched 167 spacecraft/satellites and earned $5.28 billion in revenue.
• Revenue from commercial spacecraft accounted for 11.7 percent of the estimated $45 billion total value of the spacecraft market in 2018. The remaining 88.3 percent, or $39.75 billion, was related to civil and military spacecraft, including cargo launched to the International Space Station as part of NASA’s commercial resupply services.

• Estimated global market value for commercial launch services in 2018 was $1.49 billion, according to Eurospace, the European space industry association. This is a decrease of 40.3 percent from the estimated total of $2.49 billion in 2017.
• Commercial launches accounted for 21 percent of the estimated total global market value for orbital launches in 2018.
• Launches for government customers accounted for the remaining 79 percent, or $5.60 billion of estimated market value.

This analysis of the future of the space industry examines STEM proficiency rates of primary and secondary students, subsequent STEM postsecondary graduation rates, and the familial and educational background of STEM degree recipients.

U.S.
Significant differences in STEM education can be found across public and private schools, and throughout grade levels.

No school location produced a STEM-interested and STEM- proficient student base greater than one-third.

International
The Organisation for Economic Co-operation and Development (OECD) surveys 15-year-olds across the world in the Program for International Student Assessment (PISA). The 2015 survey included over half a million students in 72 participating countries, creating a baseline of STEM proficiency on a global scale

Postsecondary Degrees in STEM
The U.S. awarded only 6 percent of all STEM degrees awarded globally in 2016— approximately 568,000.

Emerging Jobs
According to Pew Research, U.S. STEM employment has grown 79 percent since 1990. The Bureau of Labor Statistics tracked a 10.5 percent increase in employment (approximately 800,000 jobs) across all U.S. STEM occupations between May 2009 and May 2015. U.S. STEM employment in May 2015 reached 8.6 million, accounting for 6.2 percent of total U.S. employment. The Bureau of Labor statistics predicts 2.6 million U.S. STEM job openings between 2014 and 2024, with the most dramatic growth projected in mathematical science occupations.

• With the sub-baccalaureate workers included, STEM jobs represent 20 percent of all U.S. jobs. By this metric, as many as 26 million jobs in the United States require significant STEM knowledge and skills in at least one STEM-related field.
• A 2014 Business RoundTable survey projected that during the next five years, major American companies will need to add a total of nearly 1.6 million employees to their workforce: 945,000 who possess basic STEM literacy and 635,000 who demonstrate advanced STEM knowledge.
• One in three workers ages 25 and older that have at least a bachelor’s degree in a STEM field of study, but only about half (52 percent) of these STEM-trained workers are employed in a STEM occupation.
• The U.S. Census Bureau even reported in 2014 that 74 percent of those who have a bachelor’s degree in a STEM major are not employed in STEM occupations. 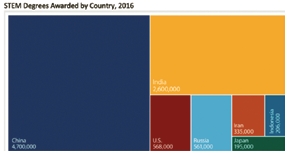 Report Purchasing Options
The Space Report serves as a resource for government and business leaders, educators, financial analysts, students, and space-related businesses. For more than a decade, The Space Report has chronicled the growth of the space community from around the world.

Note: Performance shown for each index is for the gross total
return, assuming all dividends are reinvested.

This new format makes it possible to provide the most up-to-date information on space infrastructure, facilities, launches, and programs. Similar to other major economy- measuring indicators that inform our awareness of what is happening around the world, the quarterly installments of The Space Report are designed to improve our discussions and understanding of the reach, impact, and health of the
space community.

For more information about the availability, pricing, and delivery of The Space Report, please contact  TheSpaceReport@SpaceFoundation.org.

For questions related to The Space Report content, or the space industry in general, or a request for customized research by the organization’s Research & Analysis team, please contact Research@SpaceFoundation.org. 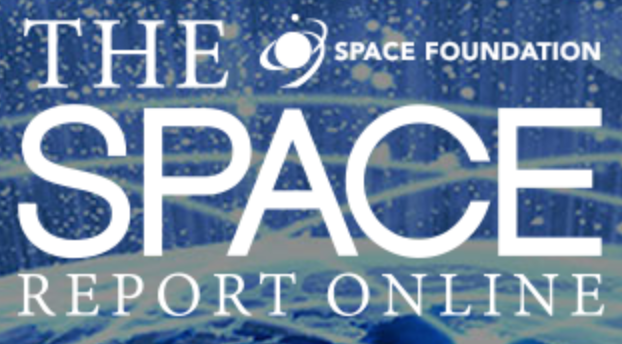