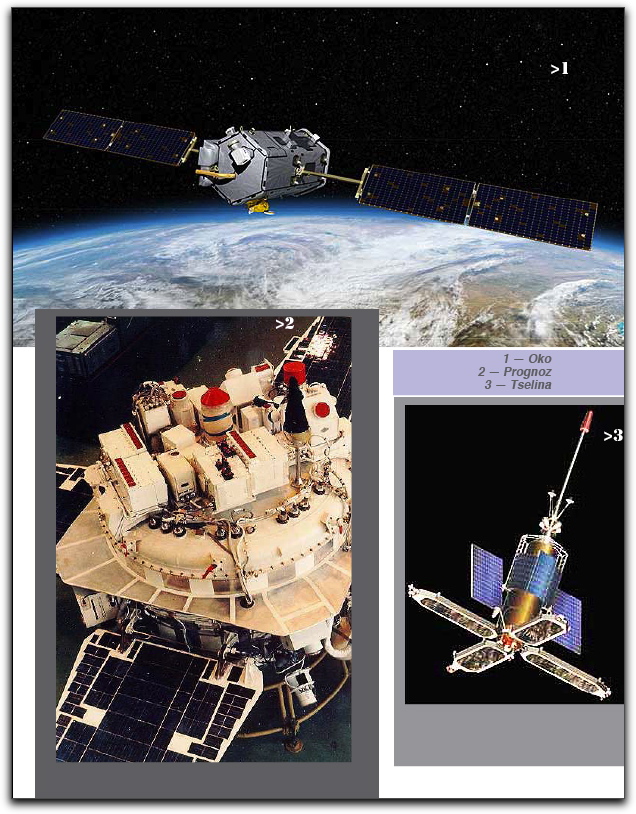 In this overview we will look at military early warning satellites, electronic intelligence gathering satellites and ocean surveillance satellites launched by the military forces of the former USSR and, currently, Russia. Information about these satellites is invariably secret and the satellites are grouped in the multi-discipline Kosmos series of military satellites, in which the first was launched on 16 March 1962. Over the years western analysts have perfected techniques whereby the objective of a specific satellite can be determined, with a fair degree of certainty, by the orbit, radio transmissions. Currently the Kosmos series has reached 2454 satellites of over 50 types, based on their purpose.

Electronic intelligence (elint) satellites pick up and record radio transmissions and radar transmissions whilst they are over foreign territory and play this back over friendly territory. The information gained in this manner gives an insight into the strategy of the opposing powers and also reveals the location of the radar sites.

Ocean surveillance satellites locate and monitor the movements of naval vessels by means of electronic equipment. 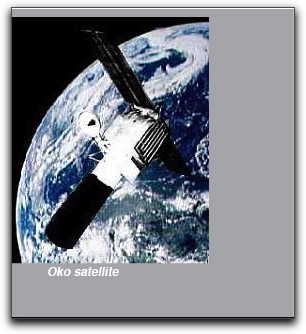 Although such is not officially confirmed, there is compelling evidence that suggests that the USSR had considerable difficulties in establishing an operational system. 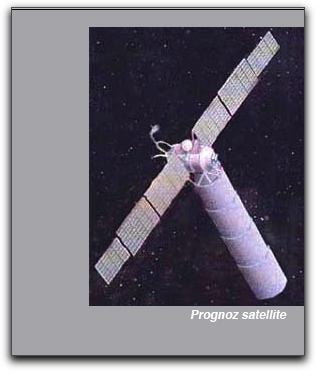 The satellites were placed in highly elliptical orbits with 40&#8734; intervals. The orbit, which is somewhat similar to that employed by the Molniya communications satellites, ensures that a satellite is over the region to be observed for an extended period. Orbits are typical of 600 x 40,000 km with an inclination of 62.9&#8734;. 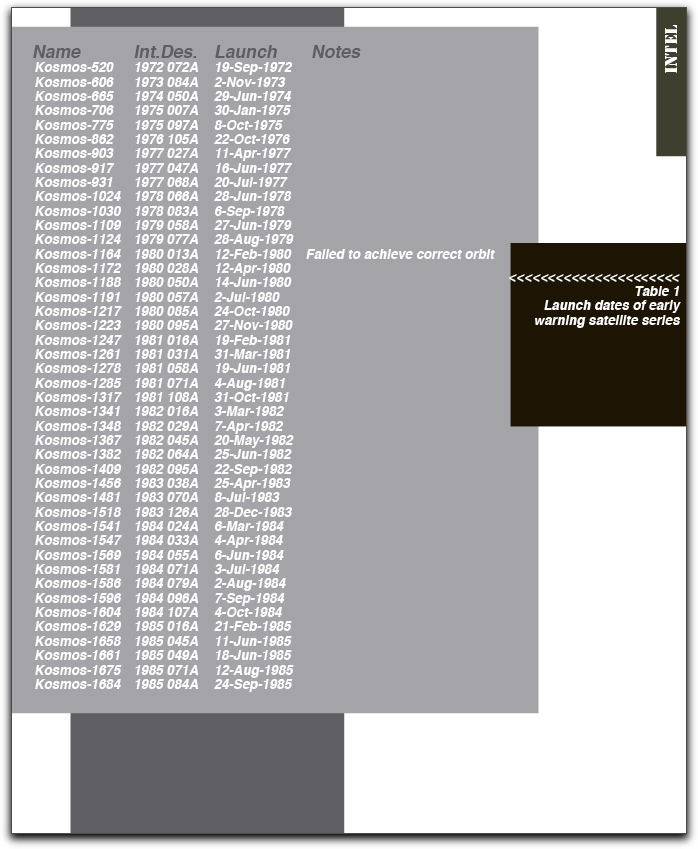 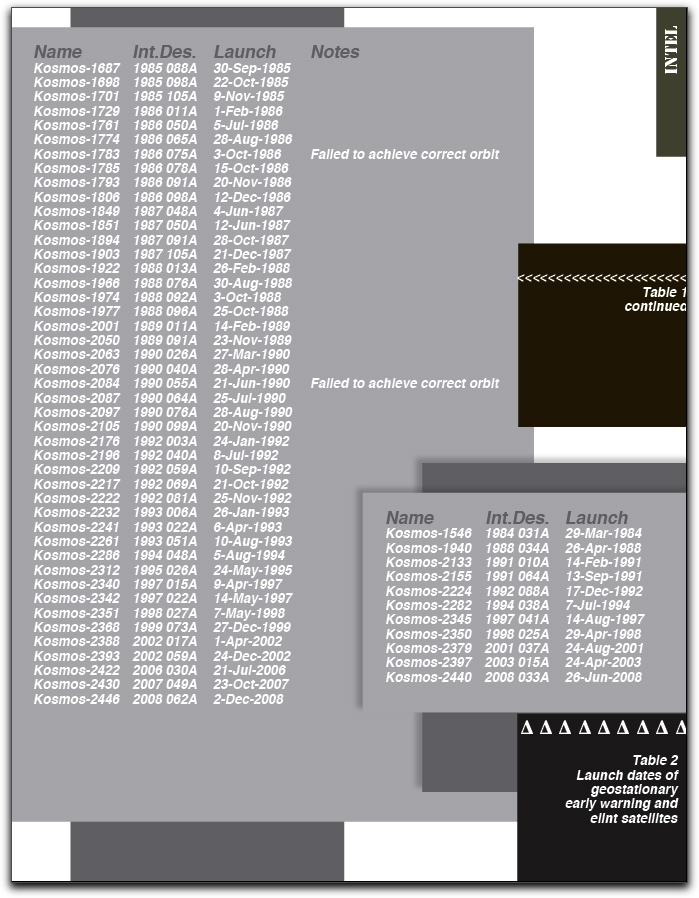 In 1975 an Oko satellite designated as Kosmos-775, was placed in a geostationary orbit over 24&#8734; W. Since no further such satellites launched, it may be assumed that this launch constituted a test which was not successful. As the USSR already had the capability to place satellites in a geostationary orbit, it may be assumed that the sensing equipment was not satisfactory at the time.

About nine years later a series of satellites was placed in geostationary orbit which, it has been suggested, have a combined early warning and elint objective. Known as the Prognoz system, it is likely that these satellites were dissimilar to Kosmos-775.

To date, western observers have not been able to determine generations of early warning satellites although there is little doubt that such generations do exist. 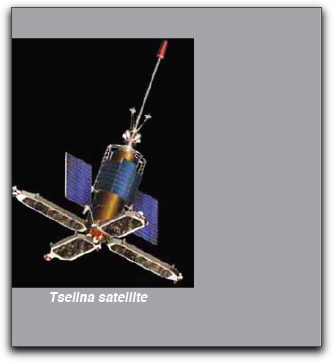 Since 1965, the USSR has launched three separate types of Kosmos satellites for the gathering of electronic intelligence data (elint). The first type of elint satellite, also known as Tselina O, were of a cylindrical shape with a length of approximately 2.00 m and a mass of approximately 900 kg. They were placed in orbits of 550 x 525 km with an inclination of 74&#8734; and an operational system consisted of four satellites spaced 45&#8734; apart. The satellites were launched between 1967 and 1982.

The third type of elint satellite, which has been identified as Tselina-2, is believed to have a mass of approximately 6000 kg. They appear to be placed in a higher orbit than earlier satellites and an operational constellation may consist of four satellites although such an assumption can only be confirmed by the passing of time. The type was introduced in 1984. Based on launches this system is currently operational.

The latter class undertook passive monitoring of radio communications which, except during periods of complete radio silence, will occur in association with naval vessels.

In spite of the distinction between the two classes they were initially considered complementary to each other and a pair of Rorsats and a pair of Eorsats was believed to be the minimum requirement for a reliable surveillance system.

As now new Rorsats have been launched since 1988 it can be assumed that the surveillance equipment on board of the Eorsats has been improved over time.

The Rorsats, also known as Upravlyaemyi Sputnik - Aktivny (US-A), were first launched in 1967. The satellites are believed to have been equipped with sideways looking radar and could detect and identify naval ships. They were deployed in typical orbits of 250 x 260 km with an inclination of 65&#8734;. During their operational life these orbits were maintained through the use of ion thrusters. The power requirement for the US-A satellites was provided by a Topiaz thermionic nuclear reactor which, at the end of its operational life, was separated from the main satellite and boosted into a higher orbit of approximately 9000 x 1000 km.

The Upravlyaemyi Sputnik - Passivny (US-P) series of Eorsats operate in circular orbits of 435 km with an inclination of 65&#8734;. Like the Rorsats, their orbits are maintained by micro thrusters but the Eorsats are powered by solar cells.

It is believed they are capable to provide target data with an accuracy of approximately 2 km to anti-ship missile platforms. The first US-P was launched in 1974 and a second generation, placed in a higher orbit, was identified from 1987. 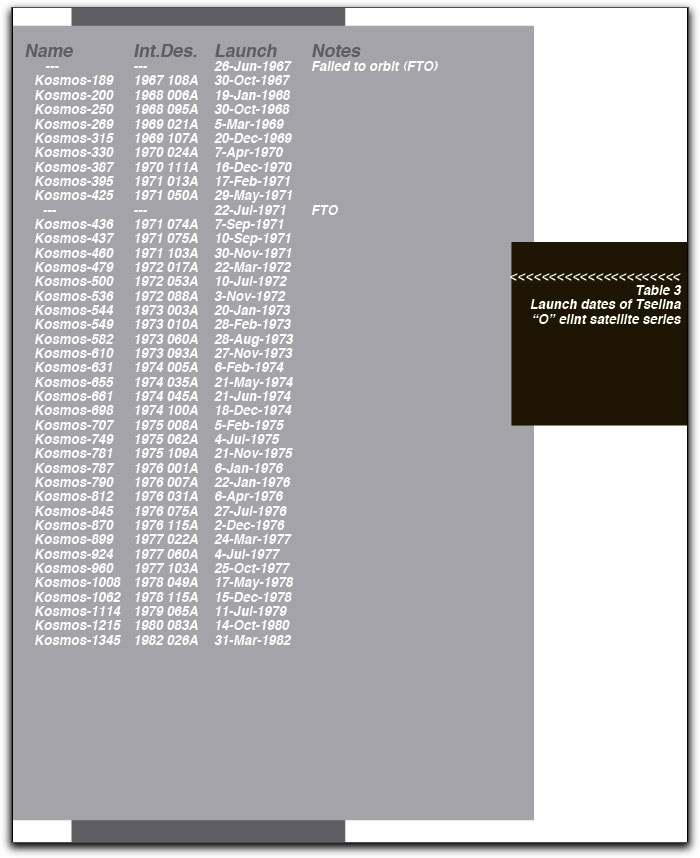 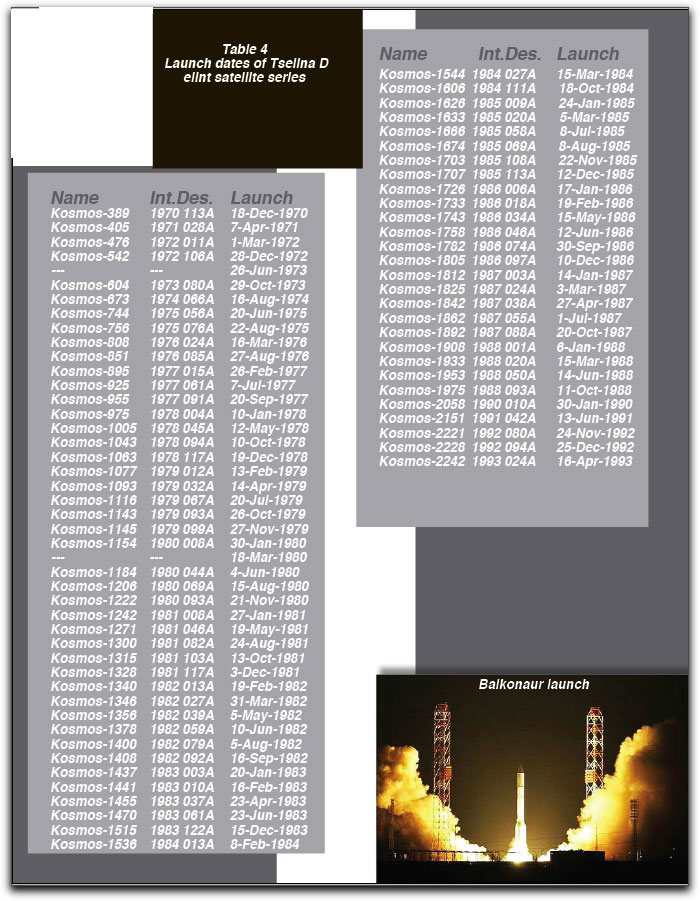 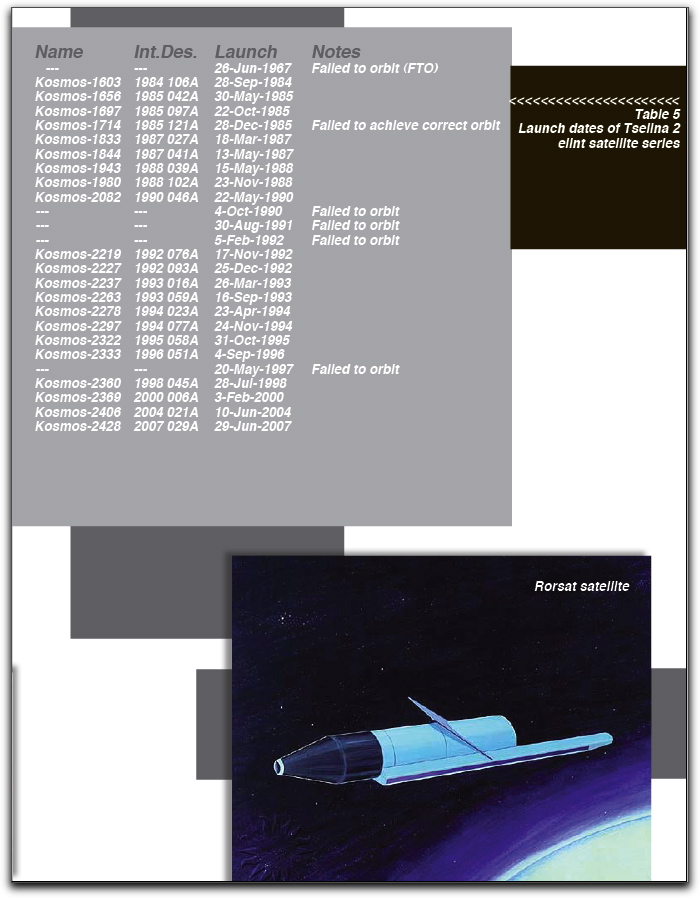 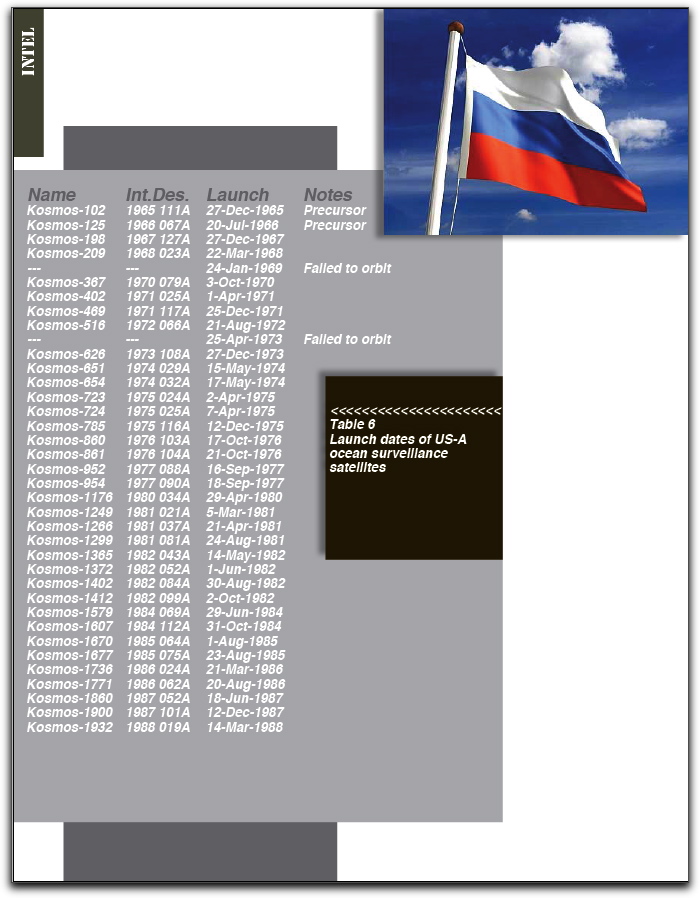 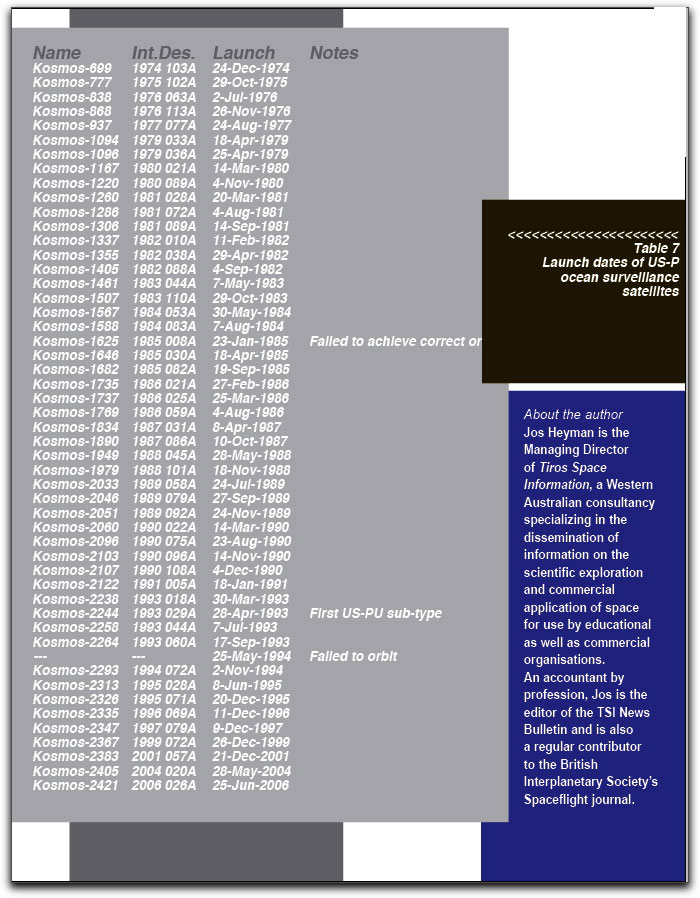