Accessibility is a central concern for emergency communications. The 80 mph winds that rushed through the commonwealth of Virginia in June of 2012 demonstrated what can happen without a resilient communications infrastructure: The functioning 9-1-1 call center was unable to receive calls from the local population. 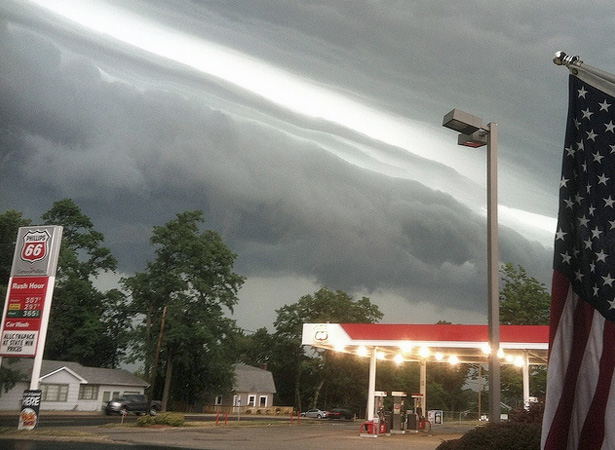 A vicious squall line moves across the northeastern U.S. on Friday, June 29th. (Photo by NASA/Goddard)

Advances in Internet protocol technologies and satellite communications can improve the accessibility of our beleaguered public safety infrastructure. An understanding of how 9-1-1 is evolving will shed light on the challenges and opportunities that surround this critical public safety solution and, ultimately, may show the path forward for incorporating satellite technology to add reliability and robustness.

A Brief History
In February of 1967, President Lyndon Johnson’s Commission on Law Enforcement and Administration of Justice recommended the establishment of a single, standardized, nationwide number to be used to reach police departments. In December of that year, AT&T (then responsible for the nationwide numbering plan) selected “9-1-1” to be that nationwide number.

In February of 1968, the first 9-1-1 system was inaugurated in Haleyville, Alabama, to serve as a way to rapidly connect citizens with emergency services. Four years later, the FCC joined the nationwide push for the use of “9-1-1.” Starting with New York City in 1973, this single emergency number started to be used by callers to access fire and emergency medical services, as well.

In 1978, the first Enhanced 9-1-1 (E9-1-1) system went live in Alameda County, California. With E9-1-1, the phone number of the caller was delivered with the call and was used to determine the home address of the landline caller. This made it possible to route the call to the 9-1-1 call center, known as a public safety answering point (PSAP), closest to the caller’s location. In 1980, the first E9-1-1 system to include the delivery of the location, the home address, of the caller to the PSAP was deployed in St. Louis, Missouri.

In March of 1998, TeleCommunication Systems (TCS), then called Xypoint, worked with wireless carrier Centennial Communications to deliver the first wireless call to a PSAP serviced by GTE Network Services in Allen County, Indiana. Soon after,

the Wireless Communications and Public Safety Act of 1999 standardized and mandated non-landline phones would also use 9-1-1.

In 2004, Voice over Internet Protocol (VoIP) began to proliferate as service providers started to interconnect VoIP with public telephone networks, marketing VoIP service as an economical substitute for traditional phone service. As many VoIP phones could work wherever a person might plug into the Internet, the landline method of determining the physical location of a caller by looking up the phone number in a database became useless.

Following a series of lawsuits in 2005, along with pressure from the public and the telecommunications industry, the FCC implemented a mandate to require interconnected VoIP providers to offer 9-1-1 services and notify consumers of the restrictions of VoIP 9-1-1.

The Next 9-1-1 Challenge: Text to 9-1-1
More than half of all 9-1-1 calls are currently placed via wireless devices. Today, we use our wireless devices for much more than phone calls. In fact, as of the fourth quarter of 2007, the wireless-savvy U.S. population has been sending more text messages than placing wireless voice calls.

Due to this trend, the public often mistakenly assumes that text messages sent to 9-1-1 will reach emergency first responders. For example, during the Virginia Tech massacre in 2007, several text messages were sent to 9-1-1; none were delivered. Following Hurricane Sandy in 2012, hundreds of citizens struggled to reach 9-1-1 via text. These messages do not even receive a response, so texters have no way to know if their messages are being received by emergency personnel.

With efforts to educate the public about current and future Text to 9-1-1 capabilities that are underway, the FCC issued a mandate in May of 2013 and is expected to issue further mandates in the near future:

– By September 30, 2013, carriers must provide a bounceback response for text messages sent to 9-1-1 if services are not offered.
– It is expected that a future mandate will require that, before the end of 2014, carriers must route 9-1-1 text messages to the nearest PSAP.

These proposed rules do not ultimately mean that Text to 9-1-1 service will be available to all citizens by 2014; accessibility will depend on the deployment and implementation of hardware, software, and training at the more than 6,000 PSAPs across the country. However, the proposed rules are expected to provide a foundation for the day—sometime soon—when all users will be able to send these “silent calls for help” to emergency services via text messaging.

Text to 9-1-1 capabilities are critical in a variety of situations, such as:

– Callers in noise-sensitive situations (such as hiding from an intruder)
– Deaf, speech disabled or hard-of-hearing callers
– Crises or situations in which networks are overloaded with voice traffic, and only smaller, text packets can successfully be transmitted

From a technology evolution perspective, it is interesting to note that over the 45-year history of 9-1-1 just presented, Text to 9-1-1 is the first instance of user-generated data being sent to our emergency responders. Does this become the catalyst for a nationwide transition to IP-based communications technology —the next generation of public safety infrastructure, otherwise known as Next Generation 9-1-1 (NG9-1-1)?

A New Approach With NG9-1-1
As should be evident, our public safety infrastructure has been bombarded with technology advancements that have had to be patched into an architecture that was created in the late 1970s. This may be one explanation why the June 2012 “derecho” storm in Virginia uncovered so many resiliency problems in the 9-1-1 centers: Our public safety infrastructure has been asked to adapt old technology to new challenges. Perhaps we need to look to the latest NG9-1-1 technologies that involve IP-based communications to address such challenges?

As far back as 2000, the National Emergency Number Association (NENA) began planning for NG9-1-1. This initiative has culminated in a national standard, called “i3,” which defines an architecture and execution plan for advanced 9-1-1 systems and services that can replace the narrowband, circuit-switched, 9-1-1. These legacy networks are steadily being replaced with resilient IP networks and progressive systems capable of routing multimedia communications based on the caller’s position.

The objective of NG9-1-1 is to augment emergency communication services by adapting to this century’s always-connected, multimedia-enabled, mobile society. Beyond linking callers to 9-1-1, this technology allows the public to transmit text, images, video and data directly to PSAPs. 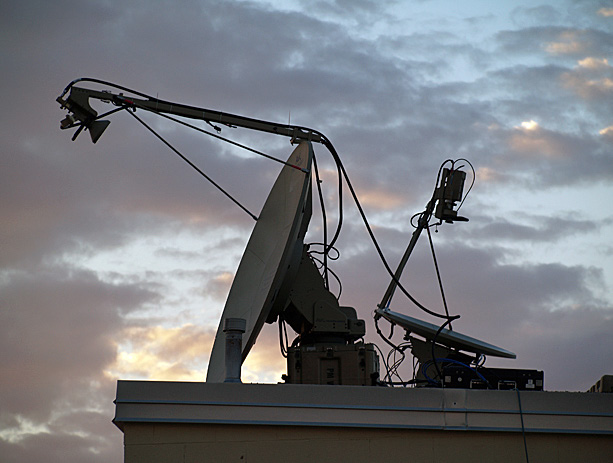 By introducing IP-based communications, we open the door to using satellite functionality paired with an NG9-1-1 solution. Military and commercial users have seen the benefit of transporting IP-based voice, video and data communications via a satellite infrastructure. We all know that it is a proven, reliable communications architecture. By connecting future NG9-1-1 solutions to a satellite-based backbone, the public safety infrastructure of the future can be made more resilient, more portable and more accessible.

Satellite Backup Boosts Reliability, Portability + Responsiveness
In the event of an emergency, reliable communication is critical for the public to reach the PSAP. Even NG9-1-1 PSAPs will rely upon terrestrial, IP-based communications architectures. If these wired connections are impaired or severed, as happened in Virginia in 2012, communicating via satellite is still there, with more robust quality and survivability. By adding a satellite terminal to the PSAP, and including satellite communications backup as part of a continuity of operations plan, the PSAP can continue to receive calls, thereby improving reliability.

However, disasters can impact emergency first responders, as well as those calling for assistance. For instance, when terrestrial infrastructures are damaged or destroyed by man-made or natural disasters, first responders may lose the communication methods upon which they normally rely.

What’s Next?
York County, Virginia, is one of the first jurisdictions to pilot NG9-1-1, including the first full deployment of Text to 9-1-1. Public safety officials in York County realized the criticality of next generation technology following an incident when a teenage girl contacted 9-1-1 to report that her neighbor’s house was being burglarized. The dispatcher asked the girl for a description of the suspects. Too frightened to peek out the window, she raised her smartphone and snapped a picture of the criminals and their vehicle. When she asked the dispatcher where to send the image, the dispatcher was flummoxed—the capability simply wasn’t available.

The quick-thinking dispatcher had the girl send the image directly to her personal mobile phone. Ultimately, due to the image, just a short time later, the criminals were arrested. York County officials immediately understood the value of NG9-1-1 capabilities. This same county was severely impacted by the derecho that hit Virginia in June of 2012. Thus, opportunities are being explored to add satellite communications to the NG9-1-1 solution that York County is implementing.

Unlike systems of the past, emergency responders of the future will be equipped with life-saving, contextual information upon arrival at the location of an emergency. In fact, the use of the word “caller” becomes obsolete, as NG9-1-1 systems enable the use of text or other non-voice communications media to be processed and delivered with equal ease to the PSAP.

In a rapidly changing world, Next Generation 9-1-1, paired with robust satellite backup and deployable satellite communications systems, will improve Public Safety’s ability to succeed in its life-changing mission. The challenge today is to deploy this technology nationwide to improve public safety tomorrow.

TCS’ Ready9-1-1
TeleCommunication Systems, Inc. (TCS) offers Ready9-1-1™, a portable, deployable solution to restore 9-1-1 services and make sure they remain operational throughout any emergency. Ready9-1-1 is available to call centers immediately when disaster strikes, and its reliable satellite communications allow your trained call-takers to remain focused on serving the community and ensuring public safety.

Ready9-1-1 is the result of TCS’ extensive experience as the pioneer in Enhanced 9-1-1 (E9-1-1) and Next Generation 9-1-1 (NG9-1-1) products and services; our knowledge regarding continuity of operations, information assurance, cybersecurity and integrated logistics support; and our expertise in providing highly secure deployable satellite solutions for mission-critical communications. We have the proven performance and unparalleled experience that make us the company you trust when it matters most. 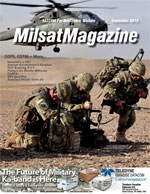