Most people have probably never heard of DVB-RCS or assume it is just another military acronym. DVB-RCS is actually a commercial standard of increasing importance to military SATCOM network operators. It stands for Digital Video Broadcast with Return Channel via Satellite.

Particular interest in DVB-RCS this year comes with the imminent final approval the Second Generation (2G) of the DVB-RCS standard. This is a major advance in performance and capabilities that has been in development and testing for several years under the informal name, “Next Generation DVB-RCS”. It offers the latest satellite waveform technologies for modulation and coding, plus many other useful features. 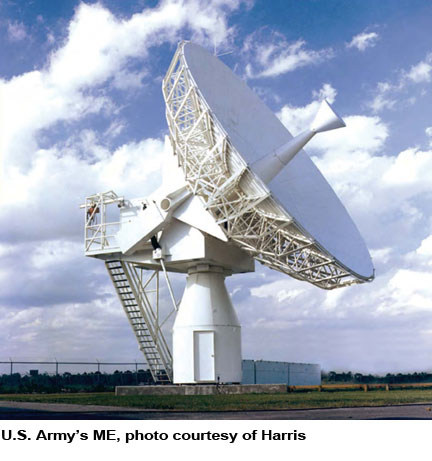 What’s It All About?
Despite its unusual name, DVB-RCS is actually all about implementing fast, efficient, and reliable Internet Protocol (IP) networks using Very Small Aperture Terminals (VSATs) — or larger ones, if necessary. It also provides excellent support for VSAT mobility. High-throughput Communications-On-The-Move (COTM) is delivered with roaming across beams and countermeasures against interference for ships, off-road vehicles, and aircraft. DVB-RCS works with any type of electronic array or stabilized antenna system, in any satellite band or beam configuration.
DVB-RCS specifies use of the popular DVB-S2 standard for the Time Division Multiplexed (TDM) carriers in continuous mode, which can be broadcasted to hundreds or thousands of remote VSATs from a central hub, gateway, or master station. It also specifies the advanced TDMA control logic, precise burst synchronization (down to 37 nanoseconds), modulation and coding, plus fast frequency-hopping used on TDMA carriers. Time slots may be allocated to a given VSAT statically and/or dynamically (i.e., as bandwidth-on-demand) in any mixture determined by policies set by network operators for different applications or traffic types.

Missions requiring any combination of VoIP, video conferencing, video feeds and/or video multicasting, plus any type of data application, can be served with a single VSAT. Each capacity request from the VSAT for bandwidth-on-demand may distinguish the QoS treatment required for the service.

DVB-RCS is ideal for remote field or combat operations that need huge transmit bandwidths rapidly but unpredictably. A TDMA “carrier group” can have dozens of carriers creating a massive pool of shared bandwidth for return and mesh link communications. Up to 80 MHz (or ~70 Msps) of shared TDMA capacity is feasible in commercial implementations that use wide-band, multi-carrier burst demodulators. This is in contrast to most proprietary TDMA systems which are limited to < 8 MHz of shared bandwidth for TDMA access.

In the latest commercial Return Link System (RLS) burst demodulators, all 80 MHz can be digitized and processed for up to 32 concurrent bursts in a 1U rack-mounted unit for reception at the hub or a number of gateway stations. This also enables high-capacity, high-performance hub/gateway systems, easily transported to the theater of operation. 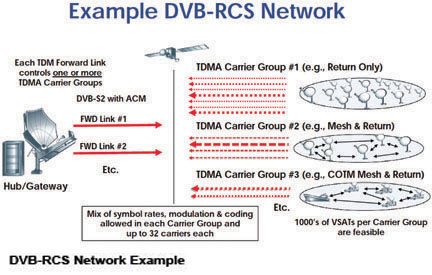 In recent years, Adaptive Coding and Modulation (ACM) on DVB-S2 carriers operating at information rates well over 100 Mbps in TDM mode has proven to be a key advantage in many networks using DVB-S2 today, often doubling the TDM carrier capacity and greatly improving TDM link availability. It is DVB-RCS, however, that specifies how ACM is implemented with rapid closed-loop control using the same signaling messages that handle closed-loop synchronization and capacity requests for TDMA time slots.

In DVB-RCS, the modulation, coding, and symbol rates on TDMA bursts are also handled adaptively, in real-time, using intelligent carrier selection in the TDMA controller at the hub. This completes increased link availabilities and average information rates obtainable for two way communications, and delivers better gains than today’s proprietary adaptive methods, because of the larger dynamic ranges supported. This allows VSATs to perform fast frequency hopping across a wide range of TDMA carriers, operating, say, from 500 ksps up to 8 Msps in a highly reliable manner.

Other features in the leading commercial DVB-RCS implementations at higher layers include: built-in TCP and HTTP acceleration, Network Address Translation (NAT), and header compression of IP stack protocols. These are not yet covered under the DVB-RCS standard, but they are essential for high-performance, flexible networking. Many aspects of such features are now gradually being standardized by efforts in the DVB Higher Layers for Satellite (HLS) working group, in close coordination with the RCS working group.

Transmit capacities over 12 Mbps of IP content from a low-cost VSAT are feasible in today’s low-cost commercial implementations of DVB-RCS; and the receive capacities for total IP content over DVB-S2 to a single VSAT can easily exceed 50 Mbps. Of course, throughput always depends on signal-to-noise ratios (SNR), which depend on antennas, amplifiers, and many other factors including satellite characteristics and atmospheric fading, especially in higher frequency bands.

This is where the Second Generation of DVB-RCS becomes especially important.

Particularly important is that ACM is now also implemented on the TDMA carriers for each time-slot (i.e., “per burst”). This is done in combination with the dynamic adaptive carrier selection already in use today. 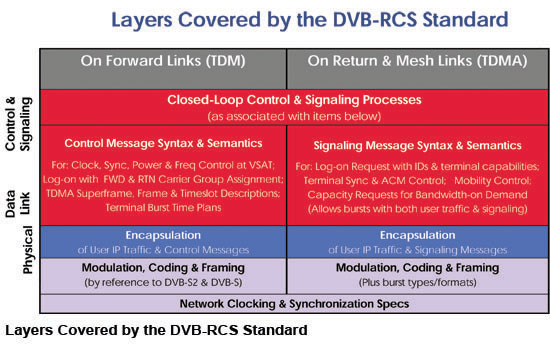 TDMA carriers, therefore, have no defined modulation and coding until a time slot is assigned on them to a given VSAT. Even the symbol rates and the number of carriers in the TDMA carrier group may be dynamically adjusted, given the flexible superframe and frame formats in the new standard. All this gives an additional dramatic improvement in average network capacity and link availability over TDMA carriers in high-frequency networks (e.g., Ka-band), without increasing antenna sizes.

With these advances, the transmit capacities from a low-cost VSAT will reach 24 Mbps of IP content in the near term, with more in the years to come.

Another benefit comes from new methods for encapsulating IP packets into TDMA bursts and on DVB-S2 carriers, which reduce layer 2 overheads to the bare minimum and eliminate MPEG overheads, while retaining flexibility for diverse Layer 3 protocols, such IPv6 and IPv4 running concurrently over the same carriers.

Joint IP Modem (JIPM) and DVB-RCS Interoperability
The JIPM program, which started several years ago under DISA, specifies the use of the DVB-RCS standard in combination with various other standards and features, such as TRANSEC to meet DoD IP transmission policies. This has given added importance and reason for the adoption of DVB-RCS in military SATCOM networks.

A key goal of the JIPM program is to improve interoperability among the diverse SATCOM systems in the defense community. DVB-RCS is the ideal platform to meet that goal. There are already several suppliers of Commercial-Off-The-Shelf DVB-RCS systems today. Furthermore, interoperability among different implementations of DVB-RCS, from different commercial suppliers, has been demonstrated for many years.

But, of course, interoperability among commercial implementations does not extend necessarily to some of the enhanced features and options outside the specifications of the DVB-RCS standard, making complete interoperability still a challenge at this time.

A further consideration is that JIPM, specified over the last few years, does not yet reference the Second Generation DVB-RCS standard. However, this is not a problem, as most COTS implementations will continue to offer the current generation of the standard for years to come and will likely apply all major improvements of the new standard as options for defense related deployments. Furthermore, both generations of the standard can coexist in the same network and interoperate with the same hub/gateway systems.

Therefore, as the JIPM program progresses, commercial suppliers will have available COTS solutions that offer good interoperability with the modem features, IP encapsulation and TDM/TDMA control systems of the JIPM program. This bodes well for increased competitiveness and cost-containment in military SATCOM procurements, as well as increased interoperability among the major SATCOM systems in the defense community.

The Year Of Transition
The year 2011 will be remembered the start of a major transition in both commercial and military SATCOM networks. DVB-RCS has the power to embrace and harmonize the use of diverse modem types, features, and modes of network operation within a single network. The robust “future-proof” architecture of DVB-RCS is rapidly gaining appreciation from many market sectors, while it also delivers ever increasing performance and efficiency for networks and applications of all types.

About the author
Mr. Forberg is VP of Marketing and Strategy at STM Group, Inc. in Irvine, California (www.stmi.com). STM Group is the leading supplier of commercial DVB-RCS network systems and teleport services, as well as a major contributor to DVB-RCS standards over the last 12 years and a key contributor to the forthcoming Second Generation DVB-RCS standard, in close cooperation with other equipment suppliers and research institutions. 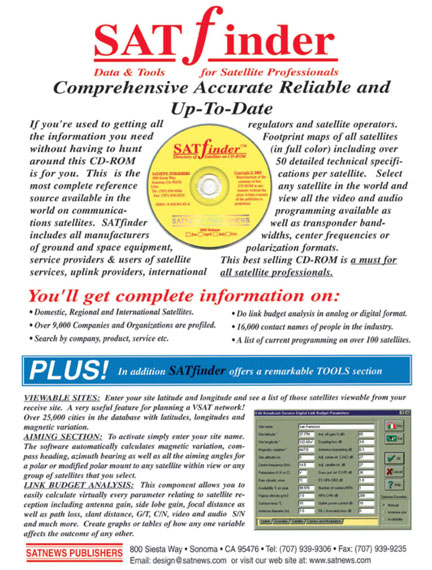