On the Saffi-Simpson Hurricane Wind Scale, the highest ran is a Category 5 storm, which has sustained winds at 157 miles per hour or higher.

When Hurricane Dorian slammed into the Bahamas and stalled for more than a day, it had wind gusts of up to 220 miles per hour. Before the storm, Marsh Harbour was the largest town on Great Abaco Island and served as the commercial hub, according to NPR. After the storm, NPR reported almost every building in Marsh Harbour was damaged or destroyed.

As the world waited for damage reports from the Bahamas, Maxar activated its Open Data Program, releasing pre-hurricane and post-hurricane satellite imagery of the Bahamas.

This high-resolution data supported the humanitarian community by providing critical and actionable information to assist response efforts and fulfilling Maxar’s purpose, For a Better World. 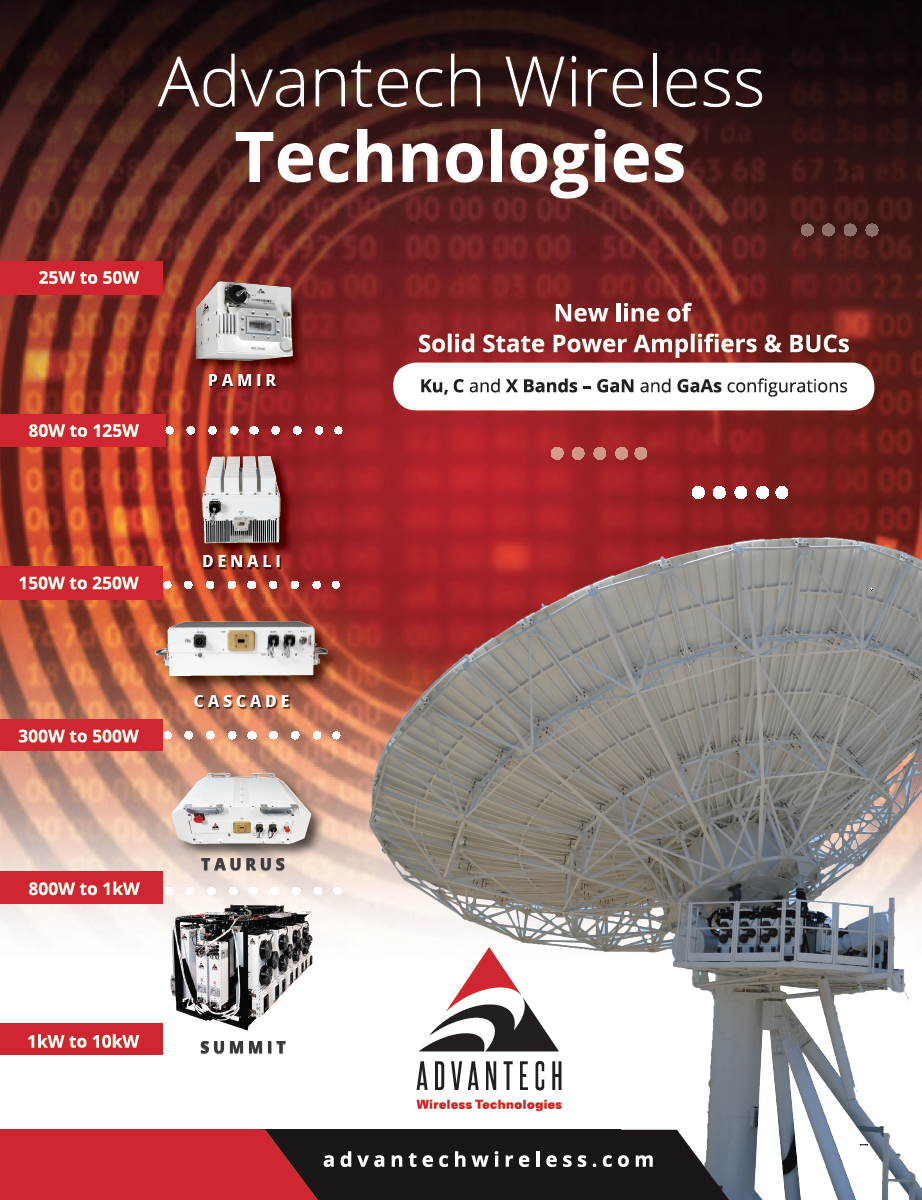 Simultaneously, Team Rubicon started notifying its response teams of military veterans to prepare to go to the Bahamas. They would be treating patients and assessing communities and medical clinics on Abaco Island before transitioning to clearing storm debris to accelerate recovery efforts.

Before they deployed teams, Team Rubicon needed to know where in the Bahamas these teams would have the greatest impact. Team Rubicon deployed 555 volunteers to the Bahamas to assist in the Hurricane Dorian disaster response and recovery efforts.

Maxar and BAE Systems have worked together since 2017 to provide Team Rubicon with the geospatial insights they need for planning and executing disaster response missions.

GXP Xplorer® provides Team Rubicon personnel with data discovery and management applications to quickly access Maxar imagery, as well as other types of data, from a web browser anywhere in the world.

With a direct connection to Maxar imagery, Team Rubicon’s Geospatial Visualization (GeoVis) analysts can then stream those files in GXP WebView®, a web-based geospatial exploitation tool. This allowed analysts to determine heights, distances, and other measurements; create informative annotations; and publish imagery-based products to assist decision makers in the field.

Both GXP Xplorer and GXP WebView are deployed in the Amazon Web Service (AWS) cloud, allowing the GeoVis team to support operations from anywhere in the world, including their own home.

The analyst used a Maxar WorldView-3 image collected after the hurricane hit the town and used GXP WebView to identify and annotate damaged homes and roofs.

Maxar’s GeoEye-1 satellite imaged the downtown area of Marsh Harbour on Great Abaco Island before Hurricane Dorian on October 25, 2018 (left image) and after the hurricane on September 5, 2019.

These reports informed the deployments of medical teams and debris clearing teams.

The GeoVis team has been training for two years on how to create these reports based on Maxar imagery and BAE Systems’ GXP software. Team Rubicon’s GeoVis team encompasses approximately 100 volunteers, who typically build products and support mission planning teams remotely. 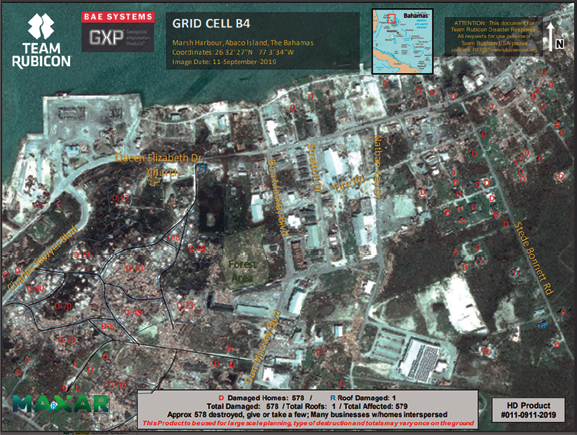 This image shows part of an imagery product produced by a Team Rubicon GeoVis analyst over the town of Marsh Harbour on Abaco Island. The analyst used a Maxar WorldView-3 image collected after the hurricane hit the town and used GXP WebView to identify and annotate damaged homes and roofs. 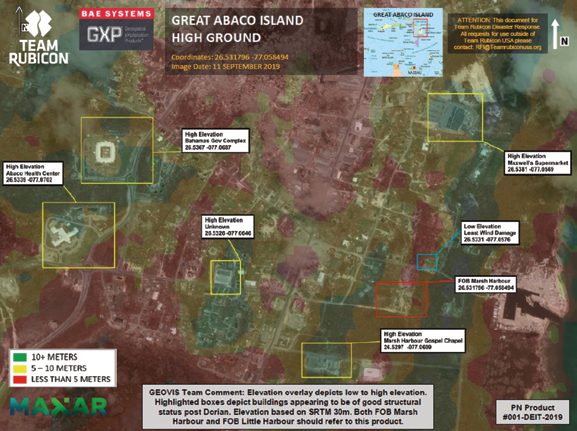 This visual shows part of an imagery product produced by a Team Rubicon GeoVis analyst that identifies buildings of good structural status and high elevation on Abaco Island, The Bahamas. This was used for contingency planning and identified hardened locations for our deployed teams to evacuate to should a storm threaten the island.

Over the last two years, the GeoVis training has been conducted as part of the PATRIOT North and South exercises, which are annual training exercises with the National Guard that prepare civilian and military entities to work together during a disaster.

The first day is dedicated to learning how to use the software and build products, followed by three days of actioning requests injected into the exercise. This allows the volunteer to immediately apply the skills learned.

After the training, Team Rubicon will initiate the GeoVis team during large-scale disasters to provide situational awareness and help Team Rubicon make informed decisions after a disaster or humanitarian crisis.

The team is led by the National Planning Team and is now operating nearly independently. Team Rubicon volunteers muck out a community-focused facility in Abaco that would eventually be used to house a large number of returning survivors.

Team Rubicon deployed 555 volunteers to the Bahamas to assist in the Hurricane Dorian disaster response and recovery efforts.

In the wake of Hurricane Dorian, the GeoVis team created more than 50 reports detailing things like concentration of damaged vs. destroyed properties, identification of potential locations our teams could stay, confirmation of roads blocked and identification of high-ground evacuation locations.

Team Rubicon leverages these reports to: 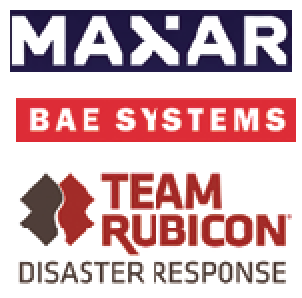 Team Rubicon puts Maxar and BAE Systems capabilities to work on the ground, exemplifying the power of geospatial data in disaster planning and response.

First responders can assess the extent of a disaster’s damage prior to arriving on the scene, create plans based on the most recent data and more efficiently help those in need. This partnership is just one example of the work that Maxar and non-profit organizations can do together to make a positive difference in the world.

Maxar empowers non-profit organizations that uniquely benefit from the company’s geospatial data and analytics to advance their global development efforts. These Purpose Partners, including Team Rubicon, reflect Maxar’s purpose, For a Better World. These organizations receive donations of imagery, analytics and service. 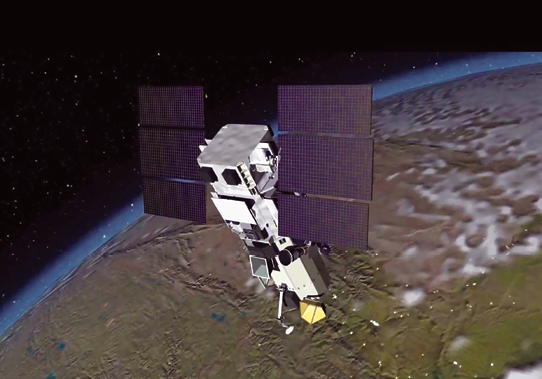 Artistic rendition of the WorldView-3 satellite Image is courtesy of Maxar and Lockheed Martin. 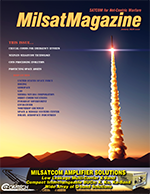