For any public safety agency, the ability to ensure communications continue to operate in the face of emergencies or natural disasters is critical. On-scene personnel must have constant access to voice and data, even when local network services are down. The Missouri Department of Transportation (MoDOT) has experienced first-hand the importance of a reliable emergency communications network. In 2008 alone, Missouri dealt with disastrous situations including major flooding and ice storms that were declared state emergency situations. By providing emergency communications services during situations like these, MoDOT helps save lives. 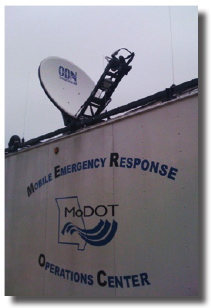 In order to fulfill its mission and insure public safety in any situation, MoDOT was seeking to expand its emergency communications network. It needed a comprehensive and reliable backup and emergency communications system to ensure critical communications always stay online and to enable coordination with other agencies and support personnel. In addition, it needed a solution with the capability to tie its radio bridges together and seamlessly provide mixed backhaul when terrestrial lines were down, without compromising their ability to deliver full network interoperability.

After originally testing other leading satellite networks, MoDOT realized that many of the solutions were too costly, or just didn’t work properly, and none of them supported all of their requirements. After careful research for leading technology vendors, MoDOT teamed with ODN, the Missouri state contractor for satellite services, and Spacenet, a leading provider of satellite networking services, to design and implement an innovative satellite solution, enabling it to successfully fulfill its mission of protecting the public, no matter what. 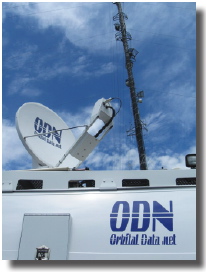 Requirements
MoDOT concluded that it needed an upgraded communications solution that could support its full range of requirements, including support for converged VoIP (Voice over IP), RoIP (Radio over IP), video, data, and radio backhaul. The system needed to be mobile, independent of terrestrial networks, provide interoperability between state agencies, as well as offer access to the PSTN to integrate efforts with FEMA or other federal agencies. Most importantly MoDOT needed a solution that was easy to manage, deploy and operate, and would be cost efficient from both a capital expenditure (CapEx) and ongoing operational expenditure (OpEx) perspective due to tight budget constraints. 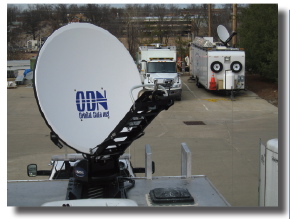 Leveraging lessons learned from past experiences, including hurricanes Katrina and Rita in 2005, MoDOT determined that the ideal network would utilize broadband satellite connectivity as its core network. During Katrina and Rita, critical voice and data communications were offline. Wireline circuits were damaged, and wireless and cellular technologies were knocked out since they are dependant on terrestrial communications. Land Mobile Radio (LMR) systems experienced blackouts as they are also dependant on the local land-based infrastructure. Unlike these traditional connectivity solutions, satellite networks completely bypass the local terrestrial infrastructure and provide a completely independent, wireless last-mile solution that provides ultra-reliable services.

VSAT (Very Small Aperture Terminal) satellite provided the perfect solution. In addition to bypassing the terrestrial infrastructure, VSAT’s offered the benefit of mobility as well as ease and speed of deployment to provide instant communications and support for affected communities. VSAT’s are also easily maintained on an ongoing basis, and can be deployed for days or weeks at a time depending on the emergency situation.

As another important requirement, MoDOT determined that it needed to own the total solution. Rather than use outsourced emergency response units or hire on demand third-party backup services, MoDOT needed to manage the total solution and have its own on-scene personnel trained and capable of deploying the systems. Using these other outsourced alternatives would most likely increase costs, and would also lead to network downtime for at least a few hours, if not far more. It has been proven that assets that can not get to an emergency scene in a timely manner are of no use. MoDOT wanted its emergency communications network to be deployed by trained MoDOT employees, accessible within key areas in the state, ready to go.

Solution
MoDOT officially implemented its upgraded satellite emergency network in 2008, with the goal of providing a reliable communications outlet in the face of unforeseen events across the state. Understanding that reliable support and network integration would be keys to success, MoDOT ultimately teamed with ODN, the Missouri state contractor for satellite services, and Spacenet, a leading provider of satellite networking services, to design a reliable solution for MoDOT’s emergency network. 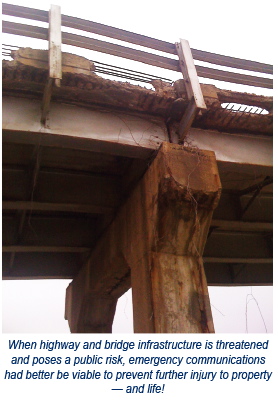 The innovative solution supports full VoIP and RoIP capabilities with Quality of Service (QoS), Internet access, and can interface with trunked radio systems and analog systems. The solution enables seamless transmission capabilities and control to communicate and interconnect remote tower sites by satellite, and interoperability with legacy radio systems. Currently, seven of MoDOT’s main radio towers are equipped with the satellite systems. The emergency network can be operated and controlled from virtually any location that has access to a high-speed Internet connection, enabling communications over radio across the world. 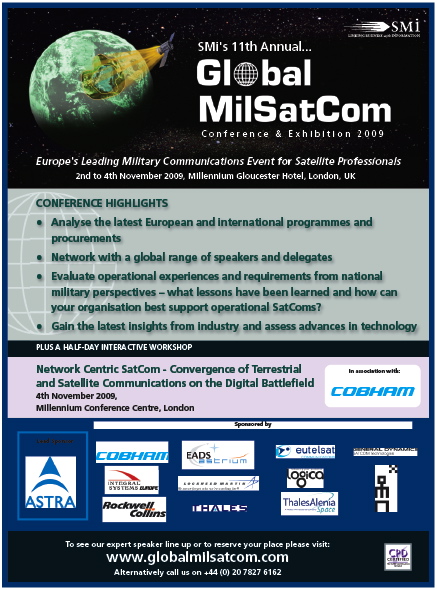 In addition, the team developed an innovative telephone solution, referred to as STAC (satellite transport audio circuits), that provides a reliable voice service that is more efficient and cost-effective than alternative phone services. Traditional satellite telephones have high contention ratios, which lead to dropped calls during high volume periods, and higher bandwidth requirements that lead to increased costs. The STAC system, however, connects directly to MoDOT’s satellite network to avoid the issue of high contention ratios for shared satellite phone users. In addition, its advanced design uses significantly less bandwidth for voice services, making it more efficient and cost-effective, and reduces the effects of latency (the amount of time it takes for a packet of data to get from one designated point to another).

MoDOT is using both fixed and transportable systems, and Spacenet’s flexible backup satellite service that can be instantly deployed, providing a more cost-effective solution for units that can remain in standby for extended times. ODN provided comprehensive technical support and training for deploying and maintaining the satellite-based emergency response communications system, and ensured that the solution operated properly with the legacy systems that MoDOT depends on. Innovative engineering and first-rate on-sight support enabled MoDOT to expand the use and capabilities of its network.

Customer Value
Since the implementation, MoDOT’s emergency communications network has been put to use numerous times for real-time deployments, and consistently allowed Missouri emergency response units to communicate better and ultimately perform at peak efficiency. The system has been used to support numerous government agencies including police and fire departments, city governments and the military.

MoDOT used the advanced emergency management network in Missouri to help government agencies and community organizations resume data and voice communications during the aftermath of severe flooding in 2008. With damaged terrestrial networks and with cellular towers down, MoDOT provided a transportable and rapidly deployable satellite network to local communities at the request of The State Emergency Management Agency (SEMA). The emergency communications network provided support for VoIP, radio backhaul, and VPN Internet access.

The system was tested again in the winter of 2008 when ice storms damaged certain regions of the Midwest. MoDOT responded with its flexible communications network that enabled reliable radio transmissions and working voice services based on its STAC system to support critical and time-sensitive conference calls with state and federal agencies coordinating the relief efforts.

Overall, the emergency communications network services were invaluable during these disastrous events. With widespread wireline outages, MoDOT’s radio and telephone communications were uninterrupted.

Final View
The advanced emergency communications network solution provides numerous benefits to MoDOT, including an easy to deploy, versatile, and scalable transportable solution that supports all of its applications. The solution is critical for public safety measures, providing a high reliability communications system in the case of a crisis or disaster. In addition, MoDOT has access to readily available satellite training, ensuring complete support for their communications network before or during an emergency situation. 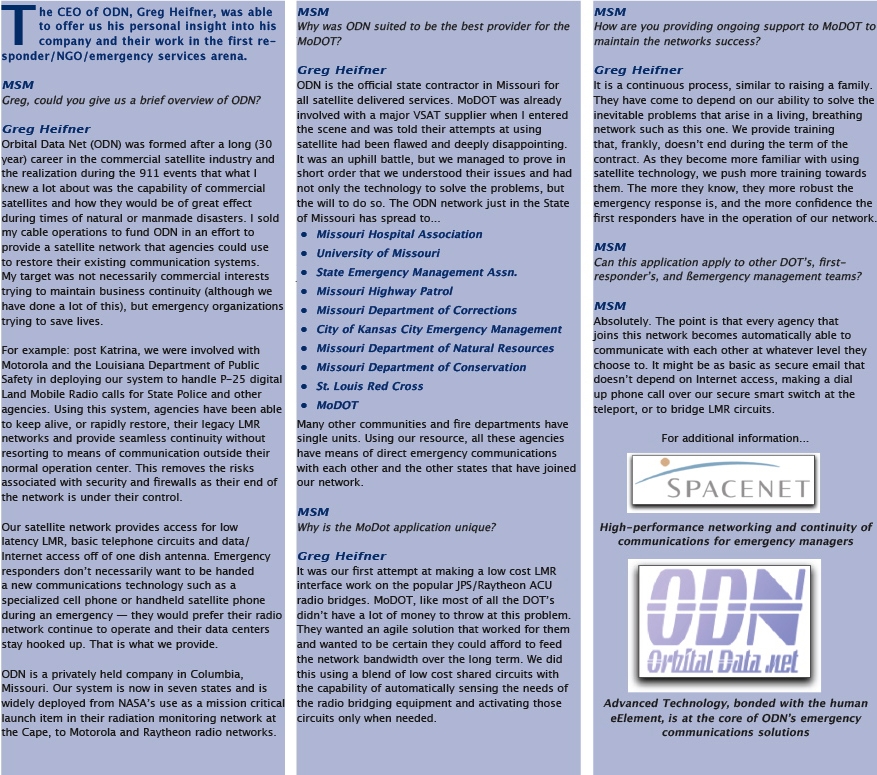