Leave it to Cisco to enter a new market segment and instantly become a market leader. Although not a traditional market for Cisco, that’s precisely what they have managed to do with their recent entrance into the military satellite acceleration arena. With the addition of Global Protocols’ SkipWare® software to Cisco’s WAAS WAN optimization technology and router line, this combined product is making immediate inroads into the military SATCOM market and popping up in networks throughout the U.S. DoD.

By focusing on the value of reduced size, weight and power (SWaP) to the tactical warfighter, Cisco has reinvented the concept of the performance enhancement proxy (PEP) and imbedded this functionality directly into the Integrated Services Router (ISR) in the form of a plug-in networking module. Branded by Cisco as the Application Extension Platform (AXP), this module is capable of running Global Protocols’ SkipWare either in conjunction with WAAS or as an independent SCPS-based accelerator. By eliminating the need for a separate, standalone accelerator and the SWaP it carries, Cisco is redefining the notion of the PEP in satellite architectures and altering SATCOM configurations throughout the DoD.

Weighing only 1.5 lbs, the SkipWare AXP is, nonetheless, a fully functional SCPS-based accelerator with all the power and performance of its full-sized appliance counterparts. The AXP module is essentially a blade, with dedicated computing resources separate from the router, that can be plugged into an open slot on a 2800 or 3800 series ISR. The AXP is accessed through the standard Cisco router configuration process, with a user experience that will be very familiar to anyone conversant in Cisco-speak. The SkipWare AXP is currently available in two speeds, 15 and 45 Mbps, but in response to early customer feedback, a 155 Mpbs version is already in the works. 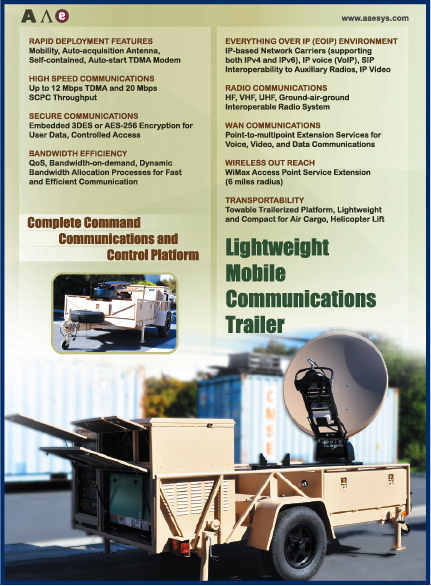 Deployed on its own, the SkipWare AXP overcomes performance loss associated with the environmental and operational effects of tactical satellite communications. Loss due to weather effects, high round-trip times, interference, path interruptions and blockage are quickly remedied by SkipWare, rapidly returning the link to bandwidth-efficient, line rate operations. The SkipWare AXP’s performance has also been tuned to work seamlessly with common military modem technologies, such as DVB and TDMA-based systems. This makes the SkipWare AXP especially well-suited for tactical SATCOM architectures, such as transit case-based or vehicle-sheltered terminals, where space is at a premium and the requirement for high-fidelity links is essential. The SkipWare AXP makes it possible to implement SCPS-based satellite acceleration wherever there is a Cisco router, which in DoD networking is just about everywhere. And, as with all SkipWare-enabled devices, the SkipWare AXP has optimized interoperability with any other SkipWare system, such as those commonly deployed throughout the tactical DoD community and DISA satellite services facilities .

Already universally known in the enterprise WANOp market for their WAAS technology line, Cisco’s go-to-market strategy for entering the military satellite space was ideal. By leveraging the strength of the SkipWare brand and install base in the military SATCOM market, the AXP instantly meets DoD standards requirements and carries all the military credentials of other SkipWare-based platforms. Users can deploy the SkipWare AXP either with WAAS, another WANOp technology, or as a standalone SCPS PEP and have instant interoperability with SkipWare’s market-leading DoD install base.

Although only recently introduced to the military market, the SkipWare AXP is rapidly finding its way into networks throughout DoD, primarily among the Army and USMC SATCOM communities. The systems integrator community, already very confident in the Cisco brand and prolific users of their router technologies, has been among the first to adopt the SkipWare AXP. Specified by contractors for architectures ranging from aircraft to submarine-based SATCOM deployments, the SkipWare AXP has proven to be the ideal form factor for tactical environments with severe space and power constraints.

Norfolk, VA-based Mission Mobility, LLC, a communications products company specializing in mobile, tactical comms kits, has been quick to identify the value of the SkipWare AXP to their customers. A long-time proponent of SkipWare, this new form factor has had a great appeal for their tactical customers.

“This is the form factor that the tactical community has been waiting for,” said Mission Mobility Sr. VP of Engineering Dave Huisenga. “Cisco routers are already being deployed throughout the DoD SATCOM community. It makes sense to take advantage of this platform to imbed other network services, and satellite acceleration is the ideal candidate to include in the router.”

Jeff Houle, a senior engineer at Lockheed Martin Tactical Systems in Eagan, MN, has a similar view. His organization has been working with SkipWare in a variety of forms, and has been particularly impressed with the flexibility and ease of use of the AXP module. “Having the ability to host SkipWare in a Cisco ISR chassis and configure it through the IOS CLI provides the obvious reduced SWAP and LTS (lifetime support) from having another independent device,” said Houle. “Additional real estate (in the network) is already hard to come by, whether refreshing COTS components, adding additional functionality to existing baselines, or designing a new system. “With SkipWare running on an AXP, it is another step forward in the evolution of networking components.” Houle also notes the value of the inherent reduced training and maintenance costs of the SkipWare AXP. Because Lockheed Martin’s clients are already well versed in Cisco configuration and maintenance, there is a very small learning curve required in implementing the AXP.

In a recent satellite acceleration bakeoff conducted by a DoD systems integrator on behalf of U.S. Central Command, the SkipWare AXP proved to be the star of the show. When run in conjunction with other WANOp technologies, its catalytic properties were made very apparent by the significant performance improvements that were gained over running WANOp products without SkipWare. When the SkipWare AXP was paired with Cisco WAAS, for example, overall WAAS performance over a standard tactical satellite channel nearly doubled for each networking application tested. For the various WANOp technologies included in the test, running with SkipWare proved to be the difference between scoring at the top of the pack and being an also-ran. 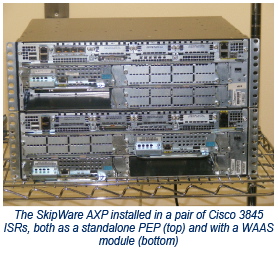 While it may be daunting to the incumbents in this space to see a dominant name such as Cisco taking an interest in their niche market, there is an upside that should be reassuring to everyone that makes their living in military SATCOM. It is a testimony to the economic viability of this market that an industry behemoth like Cisco would choose to enter it.

There are few better indicators of the growing prosperity of the military satellite market than the recent entrance of Cisco Systems as a major milsat technology vendor. While their presence may provide a competitive pressure that will compel all players to continue to improve and innovate their technologies, it is encouraging to see that this market has grown big enough that it can accommodate even Cisco.

About Global Protocols’ SkipWare
The flagship product of Global Protocols, SkipWare® was the industry’s first commercial implementation of the Space Communications Protocol Standards Transport Protocol (SCPS-TP). Recognized today as the worldwide leader among SCPS implementations, SkipWare boasts the largest install base and the broadest set of host platforms in the industry. Licensees range from satellite hardware vendors to DoD systems integrators to networking giants. American-owned and American-made, SkipWare is the name warfighters and networking professionals have come to trust for SCPS acceleration.

Since the initial release of SkipWare v. 1.0, Global Protocols has focused on providing customers with architectural flexibility, high-performance and ease of use, while remaining true to the original open-source SCPS standard. In addition to providing the highest bandwidth efficiencies of any SCPS implementation in the market today, users of SkipWare-powered devices can be assured of full standards-compliance and the highest level of cross-vendor interoperability. Self-tuning and transparent to the network, SkipWare devices can be dropped into a network and provide instant acceleration with no user configuration required.