As major Government and Military Satcom players gathered in London to discuss the industry and share ideas, what are the major issues still afoot in this turbulent sector? 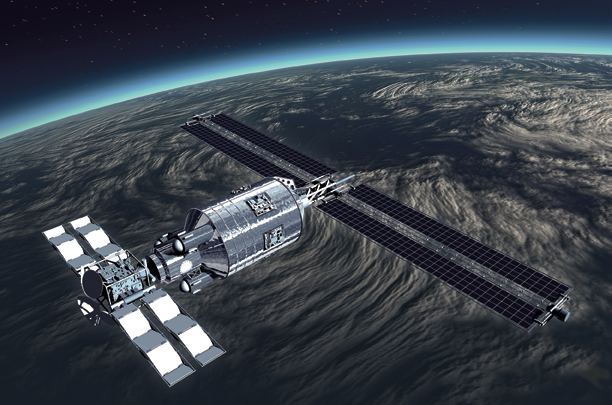 With NSR’s President Christopher Baugh chairing the conference during the event’s second day and providing a keynote address of where we see the market, there are still numerous issues to be faced as government planners address enabling communications across their organizations.

Does “Budget Certainty” mean “Smarter Acquisitions”?
With a two year budget plan passed in the US, does that pave the way for these ‘smarter acquisition’ paths such as the Pathfinder Program or single purchasing entity consolidation, as it relates to COMSATCOM utilization? We remain skeptical, but at the least it might help enable action to develop a clearer picture of the how and what is being acquired, and where synergies might develop. Or, allow money to be allocated to study the issue per-GAO’s recommendations.

For industry, it might mean some relief of extreme pricing and competition pressures (and combined with the flare-ups in the Middle East, Europe, and Asia... there might be some new opportunities)— but we don’t assume a change to the status quo…yet.

MILSATCOM Terminals are Expensive. Still.
A critical, often forgotten component of the MILSAT versus COMSAT debate, dedicated MILSAT terminals are frequently expensive, face significant production delays, and are only now providing flexibility in terms of their ability to connect to both COMSAT and MILSAT networks. For the vast majority of applications, a flexible approach to terminal programs that can leverage whichever frequency, source, or architecture available at the time provides the best service at the best price for government end-users.

In the growing UAS market, that is likely to remain a majority Ku-band play given the lead time for terminal certification and installation. For Maritime and Land-Mobile, other frequencies are easier to integrate into end-user platforms. As Ka-band offerings from GEO-HTS and MEO-HTS expand and come online, they will provide a compelling value-proposition to government planners who have Mil Ka-band frequencies available to them, and help support costly terminal acquisition programs in a challenging budget environment. 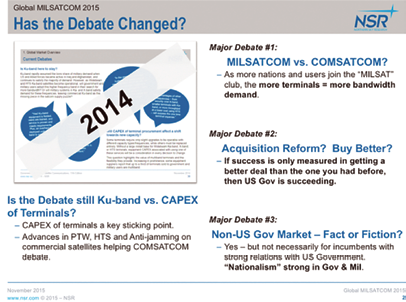 Non-US/US-PartnerMarkets—Fact or Fiction?
More nations than ever before have joined the ‘space club’ in the past five years, most with a focus on providing support to their national security forces. For people in the ‘building satellites’ market, these national space programs have been more positive than negative in government markets—at least initially. Combined with a changing role of the US around the world, one might get the impression that there is ‘easy money’ in emerging markets.

However, elsewhere in the value-chain, these programs have created a complex operating environment of supporting national capacity and space programs, integrating commercial capabilities, and allowing industry to develop robust offerings at competitive rates. With the rising ‘nationalism’ movement within the Government and Military space sector, there might be opportunities outside US/US-Partner Nations. However, do not expect that incumbent players have a unique advantage simply because they provide services to the US DoD or US Partners.

“Us vs. Them” Attitudes Changing inMILSATCOM vs COMSATCOM Debates?
This is perhaps the most contended, heated debate in Government and Military circles. Beyond just the ‘who’s cheaper’ arguments on the surface, it really gets to some of the core sentiments in satcom strategy; Does commercial count towards ‘disaggregation’, how secure or responsive can commercial really be, who do I partner with for my MILSAT systems, and, what applications can go where?

Although commercial capacity and commercial players are increasingly being considered ‘part of the solution,’ there will always be competition between them. And, at the end of the day, maybe some competition is a good thing for bringing better solutions at better prices to support government end-users in the field. 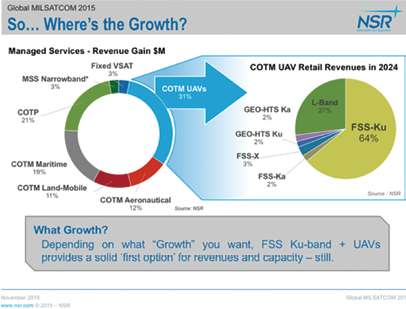 Overall, there remains a lot of skepticism and negativity as it relates to Government and Military SATCOM markets. With the changing face of military actions in the Middle-East, Europe, or Asia and the move from troops on the ground to eyes in the sky— is there a clear source of growth for industry going forward? Short answer—Yes.

“Clear Winners”
Mobility at a top-level, UAVs in general, and FSS Ku-band specifically will be key sources of growth for commercial players over the next ten years. Followed by COTP land-mobile opportunities across FSS, HTS and MSS; supporting Maritime networks, and then  Manned Aero will be key revenue growth opportunities the industry needs to develop solutions to support.

“Less Winning” Options?
Fixed VSAT applications and MSS Handhelds or other form factors (MSS Narrowband segment in graphic) will be slower growth segments from a revenue perspective. Although they provide huge numbers of In-service Units, the changing face of US defense strategy continues to shift revenue growth towards mobility segments supporting high-bandwidth segments and applications.

There is no more “easy money”. As Intelsat’s and other’s annual reports point out, simply selling bandwidth to the US Government is not the money-maker it once was.

The one good thing? More terminals mean more bandwidth and if WGS is a valid case study—military capacity alone cannot support these emerging applications by itself.

Mr. Grady has been involved in the Satellite Communications industry since 2005, joining NSR in 2010. He is NSR’s Energy market subject matter expert, and a core member of NSR’s mobility research practice for both civil and government markets. He regularly provides his insights and analysis to NSR’s single-client consulting practice, and is also a regular contributor to leading industry publications and forums.

Before joining NSR, Mr. Grady served as the Sustainable Development Projects Coordinator Intern with the Global VSAT Forum where he worked regularly with the GVF Secretariat and the Regulatory Working Group on many of the forum’s initiatives. Working with the Regulatory Working Group, Mr. Grady helped develop and implement various RWG initiatives aimed at protecting satellite spectrum, increasing awareness of satellite services, and working to promote regulatory reforms across the globe.

Mr. Grady holds a Bachelor’s degree in Economics from the University of Maryland, College Park where his research focused on renewable/alternative energies, Information Communication Technologies and the Satellite Communications Industry.  He works in NSR’s Washington DC office. 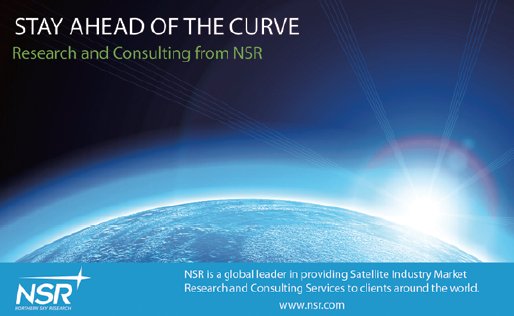