Hosted payloads have long offered the potential to increase the tempo of government and commercial innovation through lower cost access to space.

With the Iridium NEXT constellation being the world’s largest instantiation of commercially hosted payloads, a great opportunity to demonstrate the promise of the hosted payloads approach is presented.

In addition to these commercial mission solutions which have been enabled by the hosted payload approach on Iridium NEXT, Harris Corporation has also successfully integrated a government payload that supports the space weather project called REACH (Responsive Environmental Assessment Commercially Hosted).

REACH also demonstrates how a more “commercial” pace can be implemented for government payloads as REACH will provide global situational awareness of space weather events within three years for a fraction of the cost of a standalone capability.

Harris Corporation recently completed production of more than 150 payloads. The integration of these payloads on Iridium NEXT satellites is ongoing, with seventeen integrated payloads now at Vandenberg Air Force Base, awaiting the first Iridium NEXT launch.

As all anticipate the upcoming launch of the first Iridium NEXT satellites, Harris Corporation is excited and proud to have partnered with Iridium to use hosted payload technology to bring new and innovative capabilities to market that provide insights for a better world.

What can industry do to align with government procurement processes to help improve hosting opportunity utilization?

“As the budget forecast for the foreseeable future does not cover the replacement or addition of military satellite systems other than those for existing programs of record, US commanders would find it unthinkable to proceed into combat without the very latest, most advanced satellite capabilities.

"Industry officials have long said that hosted payloads are one part of the unified solution that should bring forward-looking capabilities and new thinking around how SATCOM capacity is procured, launched and managed to ensure the needed capability for mission success and fiscal responsibility.

“Through a productive partnership, military users will benefit multi-fold from industry’s innovative approaches to integrated architecture, such as SATCOM as a Service. This robust model integrate complex solutions within an end-to-end managed service architecture, and allows for reliable and easy-to-uses access to wideband capability worldwide.

“We must collaborate together so private industry complements existing government strengths by filling in gaps and enhancing the robustness of the architecture, therefore, improving protection, resilience and global portability, alongside efficiencies and cost effectiveness.”—Rebecca M. Cowen-Hirsch, Senior Vice President, Government Strategy and Policy, US Government Business Unit, Inmarsat, Inc.

“In order to better align with government procurement processes and encourage the adoption of hosted payload solutions, industry must continue to work collaboratively with the government to ensure ease of access to hosted payloads and increased awareness of the value that hosting payloads on commercial satellite brings.

“To address other governmental space-based needs, industry can provide additional offerings like data services and communications services for a variety of missions, including protected tactical communications, weather data, and space situational awareness data.

"Industry also has the capability to incorporate Government Furnished Equipment (GFE) as hosted payloads on commercial satellite, provide mission operation and management, and then deliver the end product to data users.

“As commercial GEO ComSats are expected to continue launching at a consistent rate with a wide range of accommodation and longitude offerings, government should remain flexible with industry by budgeting and building payloads in advance of host mission identification.

"This will lead to the increased utilization of hosted payload solutions and will ultimately help to ensure a more robust space architecture and greater value to taxpayers.”—Al Tadros, HPA Chair and Vice President of Business Development, SSL
hostedpayloadalliance.org/

An "End of Year" Message from HPA Chair Al Tadros 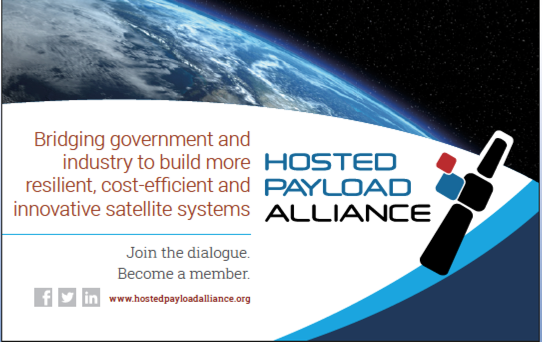 As the year comes to a close, I’d like to reflect on the progress we’ve made on the Hosted Payload Alliance’s goals, as well as provide some insight on the current state of hosted payloads in today’s satellite industry.

This heavy activity is driving down launch costs and providing more opportunities for hosted payloads to share a ride into space. Additionally, the average number of start-up space investors per year has grown from 19 to 55 over the last 5 years2, encouraging growth in satellite and fueling the proliferation of Low Earth Orbit (LEO) satellites.

As opportunities for hosted payloads continue to build, our efforts to inform and bridge communications for the benefits to all parties becomes increasingly important. Partly enabled by the HoPS IDIQ contract, which is meant to help normalize hosted payload use, government organizations have committed to a number of hosted payloads, including the TEMPO air pollutants monitoring payload and NOAA’s SARSat (Search And Rescue Satellite Aided Tracking) payload.

Over the last year, we believe that there have also been some missed opportunities for public-private collaboration, including the STPSat-6 multipurpose experimental satellite whose payloads were strong candidates for hosting on commercial communications satellite.

Finally, the opportunity to host the communications related payloads on a commercial GEO satellite could have benefited from a transition path for commercial SatCom industry to invest and continue to develop and perpetuate these technologies for the ultimate benefit of the USAF. We must ensure that awareness of these capabilities doesn’t go unnoticed.

Hosted Payload Alliance members are constantly communicating the benefits and opportunities of hosting government payloads on commercial satellites. Some of our recent government interactions include providing language suggestions to US Representative Jim Bridenstine (R-OK) regarding hosted payloads in the National Defense Authorization Act (NDAA).

Additionally, Bridenstine’s American Space Renaissance Act (ASRA), which was introduced in the House of Representatives this year, also includes language that specifically encourages the use of hosted payloads, requiring the Secretary of Defense to leverage hosted payloads to the maximum extent practicable. ASRA is a tremendous milestone for government access to commercially leveraged solutions.

In this presentation, I emphasized that our continued engagement with both government and industry is critically important. This remains true today, and our recent successes, such as the ASRA and the NDAA amendment, are proof that our efforts to highlight the opportunities that hosted payloads can offer the government and public sectors have been successful.

It is important to now leverage these successes for our continued promotion of hosted payloads and commercial acquisition strategies -- which will ultimately result in a more robust space architecture and greater value to taxpayers.

I look forward to participating in and advocating for the continued evolution of hosted payload solutions as we move onwards into the New Year.
hostedpayloadalliance.org