Assembled on the company’s advanced missile production lines, the new SeeMe satellite will provide greater situational awareness to soldiers on the ground.

DARPA’s SeeMe program is designed to show that smallsats can be built affordably to give small squads timely tactical imagery directly from a small satellite. A future constellation of smallsats would deliver high-resolution images of precise locations of interest to the soldier’s handheld device. Using their automated missile production lines, Raytheon can build large numbers of these highly reliable, smallsats quickly and affordably.

DARPA will integrate the SeeMe satellite onto a Spaceflight Industries payload that will be launched into LEO on a SpaceX rocket later this year. Military users will have an opportunity to evaluate the satellite’s performance during missions in early 2019. Eventually, a SeeMe constellation may comprise several types of small satellites, each lasting one to five years before de-orbiting and burning up, leaving no space debris and causing no re-entry hazard.
www.raytheon.com

Kratos Modular Systems Division, which received this contract award, is an industry leader in providing specialized systems in support of unmanned aerial drone system, missile defense, radar, satellite communications and other C5ISR platforms and programs. Work under this recent contract award will be performed in a secure Kratos manufacturing facility.
www.kratosdefense.com/ 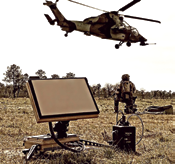 This high-profile event was staged in July by the RAF to celebrate their 100th Birthday and involved 100 aircraft from the past 100 years flying over Buckingham Palace and the skies of London.

The small but powerful SWARM terminal from Paradigm ensured that the media feed could rely on constant communications throughout the day in the face of high demand from the public on the terrestrial 4G network.

Following the event, Squadron Leader Gordon Henderson remarked on the “...outstanding level of service from the lightweight and easily operated SWARM terminal.  By providing the Air Command Media team with access to Inmarsat’s Global Xpress connectivity, they were able to continue uploading videos from the parade even as the 4G network in London begun to struggle.“

The SWARM is small and light enough to be carried in a backpack and really easy to setup and deploy.  Even a non-skilled user can set it up and be on the air in less than four minutes. 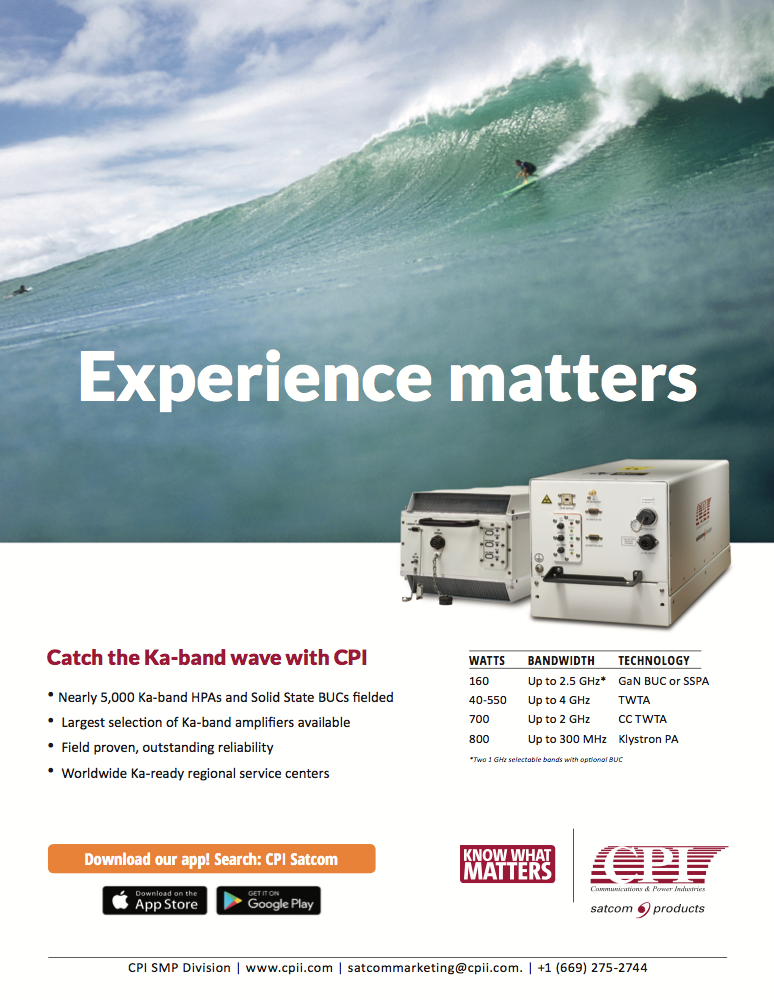 Later this year, Inmarsat and the SWARM terminal will also provide satellite communication support for the RAF100 Himalayan Venture 18 (HV18), which will unite the RAF’s past, present and future for its largest ever mountaineering expedition to the Himalayas.
paracomm.co.uk/
www.rafsportsfederation.uk/sports/himalayan-venture-18/

SSL is one of three companies qualified to compete for Department of Defense (DoD) business under the SSPEDI contract.

This new contract is one of a number of new programs with great potential in SSL’s increasing U.S. government portfolio.

The DoD’s contract is entitled Small Spacecraft Prototyping Engineering Development and Integration — Space Solutions (SSPEDI), is managed by NASA’s Ames Research Center in California. This contract is under an interagency agreement with the DoD’s Space Rapid Capabilities Office.

The SSPEDI concept establishes a rapid and flexible method for the DoD to acquire commercially-developed solutions for small to medium spacecraft and related systems from a pool of pre-qualified candidates.

As one of the awardees, SSL is eligible to compete for multiple future awards over the five-year ordering period of the contract, up to a cumulative value of $750 million. 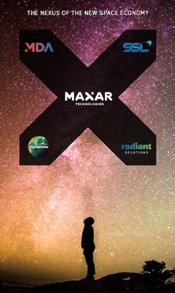 Radiant will study next-generation systems for Intelligence, Surveillance, and Reconnaissance (ISR) and contribute its world-class mission engineering expertise to the company’s solutions.

SSPEDI is one of many successes over the last year. Recent progress and achievements that further the momentum in the U.S. government market include:

• Expanding the scope of work on the NASA asteroid exploration mission Psyche, which is on track for its scheduled launch in 2022
• Reaching a major milestone in building the spacecraft bus and robotic arms for the Robotic Servicing of Geosynchronous Satellites (RSGS) program, developed through a public-private partnership with DARPA
• Progressing on schedule for both the spacecraft bus and robotic arms for NASA’s Restore-L project
• Contracting with NASA’s Jet Propulsion Laboratory to design and build critical equipment for a spacecraft that will explore Europa, an icy moon of Jupiter.

The company also continues to work across the DoD, civil, and commercial space communities on several current programs and studies to ensure that the U.S. government agencies define next-generation space technologies:

SSL’s new technologies, tools, and its commercial focus all combine to develop innovative solutions such as its geosynchronous satellite platform, and commercial production capability to design and build small satellites for a broad range of applications, including high resolution remote sensing and communications.

COTS solutions for the battlefield retooled by Draper 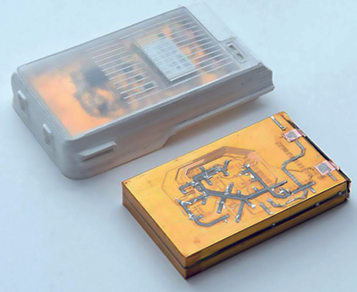 Additive manufacturing, also referred to as 3D printing, is versatile, flexible, highly customizable and, as such, can suit most sectors of industrial production. Materials to make these parts and objects can be of a widely varying type. They include metallic, ceramic and polymeric materials along with combinations in the form of composites, hybrid or functionally graded materials.

The challenge remains, however, to transfer making the shapes and structures into obtaining objects that are functional. A great deal of work is needed in AM in addressing the challenges related to its two key enabling technologies, namely ‘materials’ and ‘processes,’ to achieve this functionality in predictable and reproducible ways.

Draper used additive manufacturing to print sensors onto the battery of a commercial-off-the-shelf hand-held device. The result was a communicator with new capabilities but no discernible change in its profile or weight.

Military applications of additive manufacturing face a particularly high bar if they are going to be modified for the battlefield.

Products must be ruggedized, fit the warfighter, hardened and secure, according to Chris DiBiasio, Draper’s group leader for advanced manufacturing, who says it is important to remember that, in many cases, the operators of the equipment are soldiers, and their primary function is protection.

DiBiasio manages Draper’s Additive Manufacturing Center and he is familiar with modifying commercial off-the-shelf (COTS) computers, networking equipment and various technologies for the battlefield and other defense and commercial uses.

Draper recently put this idea to the test by using additive manufacturing to print sensors onto a COTS hand-held communicator. Draper produced a scanned image of the communicator’s battery pack to find nooks and crannies where the new technology layer could reside, ported the image into a 3D CAD model, processed the CAD model with Draper’s proprietary software, converted the data into instructions for the 3D printer and then printed an ultra-thin, multi-stack layer of electronics.

DiBiasio said that the scripts and algorithm streamlined the 3D printing process and reduced 3D printing and assembly from a week to only a day or two. The result was a communicator with new capabilities but no discernible change in its profile or weight.

Military use of COTS and additive manufacturing is on the upswing. The U.S. Air Force recently launched a trusted computing program to give military access to COTS microelectronics.

Elsewhere, the U.S. Army has announced plans to merge its additive manufacturing technology roadmap into an overarching DOD roadmap.
www.draper.com/

Atlantic Microwave has claimed a world’s first, simultaneously, in two ‘of the moment’ technologies. 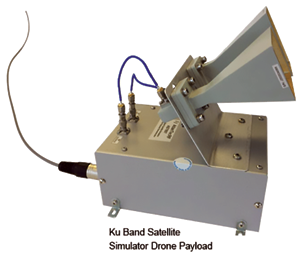 The company has announced the maiden flight of their DSS Satellite Simulator product on board an eight rotor drone. This a first ever airborne Satellite Simulator and is the first time in history, according to the company, that an unmanned aerial vehicle has been deployed in such a task.

Off-air testing of ground and vehicle based satellite communications systems has developed into a major industry need with the current explosion of SATCOM applications in multiple industries.

These systems cannot just switch on and hope for the best. The potential to upset fellow satellite users is risky and expensive and Atlantic’s Satellite Simulator and Loop Test Translators have been saving the day for SATCOM operators worldwide during recent years.

Drones, similarly, have been taking the world by storm with uplifting applications both professional and amateur in use. By combining these two major advances, Atlantic Microwave has provided a service to customers that is currently unrivaled, while the first flight, which occurred in Denmark, used frequencies in the Ku-band for ‘proof of concept,’

Atlantic is also offering similar payloads in Ka-band, which delivers greater bandwidth, X-band for the military, as well as future Q- and V-band operations.

Atlantic Microwave, based in Braintree, U.K. has established itself as a global leader in satellite simulation with their antenna and cabled-in based products, which are supplied to major SATCOM operators, integrators and manufacturers on all continents.

Speaking at the product announcement at the Royal Festival Hall in London last month, Atlantic’s CEO, Geoff Burling said, “We are in an exciting age where new technologies are shaping our current and future lifestyles. At Atlantic Microwave, we embrace these advances and seek, innovatively, to create solutions in all kinds of communications industries.”
www.atlantecrf.com