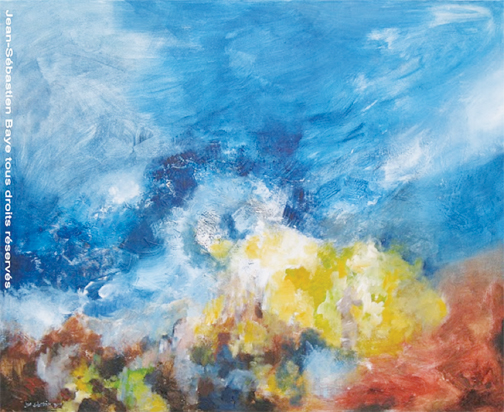 All satellite communications links are subject to uncertainties and variations in equipment, environmental and atmospheric effects, and random variables that make satellite communications link design as much art as science. While tools are available for developing link budgets, the decisions and assumptions that really determine link performance come from careful consideration of all aspects of the link itself.

Among the critical decisions link designers make are the items that contribute to EIRP: antenna gain and amplifier power. Whole treatises exist on antenna gain possible for a given diameter, but here we focus on the RF power into the antenna. In the past, this power has been specified in every way you can imagine, with link budgets often showing rated high power amplifier (HPA) output power and then a back-off value in dB assumed sufficient to meet interference requirements. These back-off assumptions vary widely, are frequently untested, and are even occasionally missing. New SATCOM systems using millimeter-wave bands and more complex waveforms may mean that the old assumptions don’t always hold. The current trend is toward specifying linear power required at the amplifier output flange. This provides a concrete value for the link budget, and a straightforward method for comparing candidate power amplifiers while enabling optimization of prime power efficiency by evaluating the biggest power consumer in its likely operating condition.

Another commonly used parameter in describing HPAs is P1dB, which may be ~1dB below the Psat … or not. An amplifier’s P1dB is defined as the point on the saturation curve where its gain is compressed by 1dB. This is found by determining the amplifier’s linear gain, subtracting 1dB, and locating the corresponding point on the curve (Figure 2).

Two general categories of HPAs are used on SATCOM uplinks: vacuum tube-based amplifiers and solid-state amplifiers. For vacuum-tube amplifiers, including both travelling wave tube amplifiers (TWTAs) and klystron-tube power amplifiers (KPAs), the industry practice is to use the tube’s saturated output power as the HPA’s rated power. The TWTA’s rated flange power is typically 0.5dB to 0.7dB lower due to component losses in the amplifier’s output section; i.e., the “750W” Ku-band TWTA provides 650W RF power at the flange. Solid-state power amplifiers (SSPAs) always use flange power, yet the industry nomenclature has greater variation because some suppliers use Psat and others use P1dB. SATCOM system designers must take careful note of these differences.

Linear Power
What matters most in the link is linear power, generally defined as the output power at which the amplifier operates without interfering with transmission of in-band or out-of-band signals transmitted over the satellite. Many specific definitions of linear power exist, but the most common Plinear definitions are based on the following parameters: 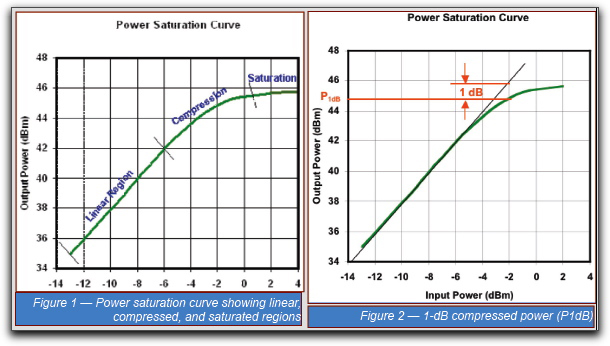 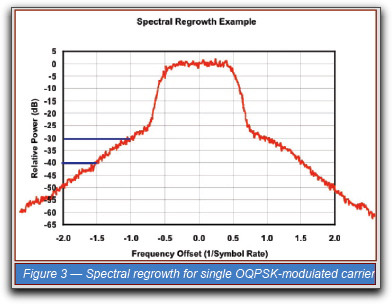 Spectral regrowth is the energy from the modulated signal that spreads into adjacent channels due to the amplifier’s inherent non-linearities. SR is highly subject to signal conditions (modulation format, symbol rate, and filtering). Most commercial SATCOM currently uses quadrature-phase shift keying (QPSK) or offset QPSK (OQPSK); these are frequently used when specifying SR performance. Typical specifications require SR be -30 dBc at an offset frequency from the carrier equal to the modulated signal’s symbol rate, or sometimes 1.5 times the symbol rate. These points are identified in Figure 3 on an SR plot for an OPSK modulated signal, where the amplifier meets a -30dBc SR at 1x symbol rate offset from center frequency, and -40 dBc at 1.5x symbol rate offset. The output power at which this data is taken is therefore the amplifier’s single-carrier linear power. 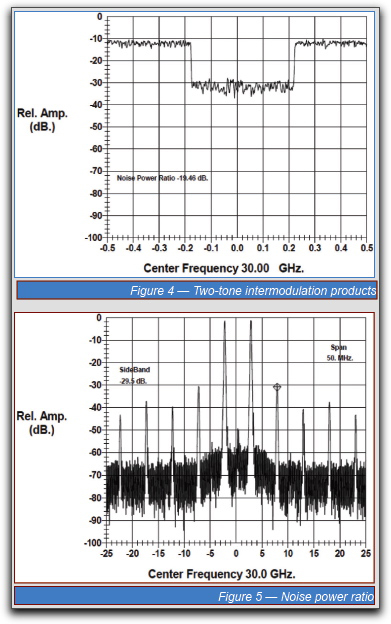 Intermodulation products, or intermods, are spurious signals occurring in-band when more than one carrier is transmitted simultaneously through a single non-linear device. These undesired tones fall in band for closely spaced carriers and interfere with communications in nearby channels if too large. This most commonly used linearity requirement for SATCOM amplifiers is often specified in the range of -24 or -25dB below the individual carrier power used for the test so that the IMD has negligible impact on signal-to-noise ratios in adjacent bands. Figure 4 shows two equal carriers and the resulting intermods for a typical amplifier, taken at a specified linear power level; the highest power IMD in this case is the -29.5 dBc third-order intermod.

Noise Power Ratio
For uplink transmitters carrying many signals on individual carriers, the most appropriate linear power definition is noise power ratio (NPR), or the level of “noise” created in the channel from multi-order intermodulation products among the many modulated carriers being transmitted. To measure NPR, an input signal that looks like noise (many uncorrelated modulated carriers at similar power levels) is passed through a filter that notches out a narrow portion of input noise power. These narrow notches (<10% of input signal bandwidth) have 40+ dB of rejection. Distortion from non-linear interaction of these input signals shows up as a noise floor in the notch. The NPR is the average power level of noise in the notch compared with the power level of the rest of the output signal (see Figure 5).

Back-Offs + Pre-Distortion
Power amplifiers require a “back-off” in output power from their maximum level to meet specified linearity and not interfere with other signals’ transmission. For TWTAs to meet linearity requirements noted above, typical back-off is 6-7 dB below rated output power. For SSPAs, typical back-off to meet linearity is 2-4 dB below rated P1dB. Predistortion can increase the amount of linear power for both TWTAs and SSPAs, although the benefit is much greater with TWTAs. For most SSPAs, the small improvement gained from a linearizer doesn’t justify the additional cost, although this is not the case at Ka-band where solid-state devices exhibit poor linearity characteristics compared with lower frequencies. For TWTAs, predistortion linearizers typically improve linear power by at least 3 dB. Linear operating power levels depend on the parameter specified, but linearized TWTAs generally require only 2-4 dB back-off to meet requirements.

To see the full benefit of the linearizer, we can examine its effect on each of three linearity parameters defined. Figure 6 shows spectral regrowth performance of a TWTA with and without a linearizer.

For a -30 dBc requirement, the linear power level improves from ~5.5 dB below rated power to ~2 dB below rated. This 3.5 dB improvement can be critical in enabling use of a much lower rated power amplifier, and consequently reducing prime power draw significantly. 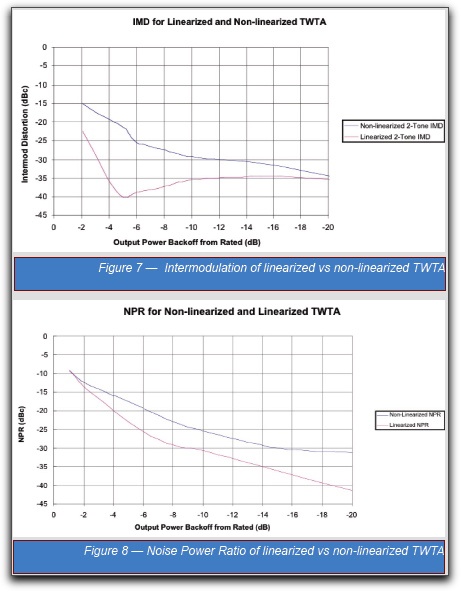 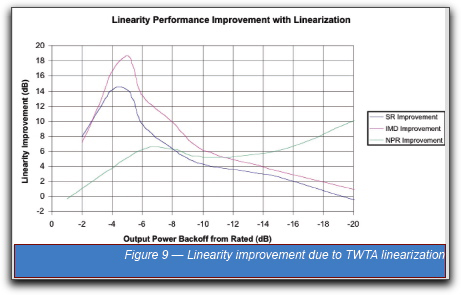 NPR specifications are often the most challenging, but Figure 8 shows an example of NPR performance with and without linearizer. Linear power for a typical -19 dBc NPR spec goes up from 6 dB below Prated to just 3.8 dB below — a 2.2 dB improvement. In the case of NPR, the linearizer improvement continues increasing well below the Plinear all the way down to 20 dB below rated. 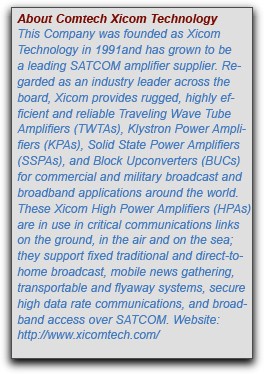 To summarize linearizer benefits, improvements in all three distortion parameters were plotted on a single graph (Figure 9). In typical operational ranges of 3db to 15dB below rated power, the linearizer provides at least 3dB improvement and often much more for each parameter.

Clearly, the task of understanding system requirements and selecting an appropriate HPA is not an easy one, but hopefully with solid understanding of the linearity required in the system and how best to specify the amplifier, link budgets just got a little less cloudy.