“My visit here and our deep, rich discussions are indicative of the robust partnership we share with the Australian Defence Force and this nation as a whole,” said Adm. Haney. “We discussed ways to further strengthen our combined efforts in areas of close cooperation and common interest.”

Charged with conducting global operations 24/7, USSTRATCOM is one of nine U.S. Department of Defense unified combatant commands, and is responsible for strategic deterrence, space operations, cyberspace operations, joint electronic warfare, global strike, missile defense, intelligence, surveillance and reconnaissance, combating
weapons of mass destruction, and analysis and targeting. This visit was the Admiral’s first to Australia since becoming the commander of USSTRATCOM.

DARPA Is POD’ling Along To Foster Hosted Payload Capabilities

Launches of satellites for the Department of Defense (DoD) or other government agencies often cost hundreds of millions of dollars each and require scheduling years in advance for one of the handful of available slots at the nation’s limited number of launch locations.

Launches of commercial communications satellites, on the other hand, are relatively frequent and inexpensive.

Commercial launch vehicles also often have unused carrying capacity that their operators can offer to other satellite owners through “hosted payload” services.

Unfortunately, no technology currently exists to enable government and military satellites to share rides and separate themselves from commercial communications satellites headed to GEO.

To help foster the creation of such a capability, DARPA’s Phoenix program has shared its Hosted POD Assembly Interface Control Document.

The document provides specifications for Phoenix’s Payload Orbital Delivery (POD) system, a standardized mechanism currently in development that is intended to safely carry a wide variety of payloads to GEO aboard commercial communications satellites. 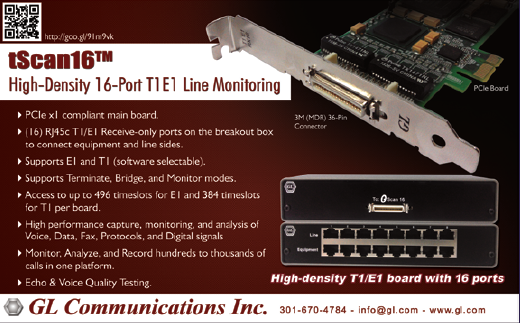 PODs are designed to help take advantage of the frequency of commercial satellite launches and associated hosted payload service opportunities to enable faster and lower-cost delivery of payloads to GEO.

DARPA is also pursuing a possible risk-reduction flight to validate the POD technology, which could eventually provide “FedEx® to GEO” capabilities to make space deliveries to high-altitude orbits much easier and faster.

A standardized interface would attach the POD to the host satellite and then release the POD at the desired orbit.

The POD system is one of three main technology research areas for Phoenix, which seeks to enable robotics servicing and asset life extension in GEO while developing new satellite assembly architectures to reduce the cost of space-based systems.

In October, DARPA released a Request for Information (RFI) seeking insights regarding a potential flight demonstration to introduce DARPA-developed space robotics capabilities in GEO within the next five years.

The RFI also seeks input into potentially establishing a public-private partnership that would make cooperative robotic servicing available to both military and commercial GEO satellite owners on a fee-for-service basis.

DARPA’s infosite is located at http://www.darpa.mil/

This report analyzes the civilian and military UAS markets for both HALE and MALE platforms, in terms of the growth in their number of airframes, in-service SATCOM terminals, revenues, and capacity demand by frequency bands. 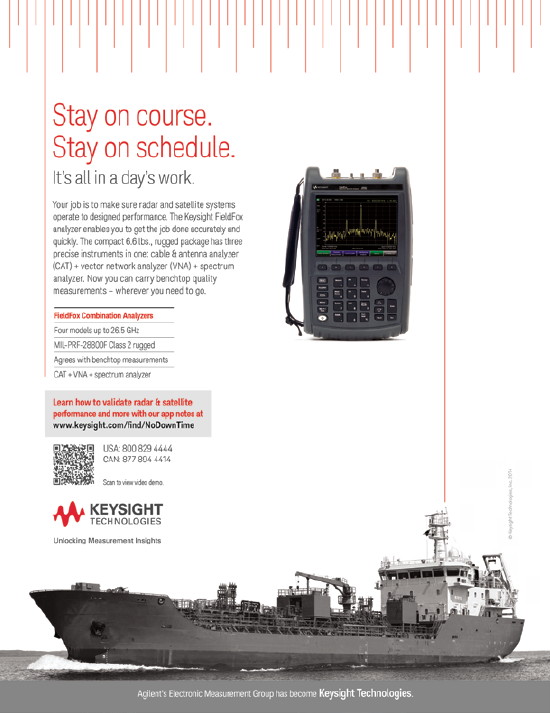 Segmented regionally and including case studies of future markets, the report offers not only an overview of the UAS and Satcom ecosystem, but also a thorough look forward at the future development of long endurance UAS as a potential complement or competitor of the Satcom industry. The report’s findings are aimed at enabling SATCOM service providers to plan accordingly so as to capitalize on the market opportunities that these UAS bring, and also protect and enhance their current market position by gaining a competitive edge by allocating their satellite resources efficiently across the globe.

The report features more detailed analysis of the UAS SATCOM markets than ever before, using a bottom-up approach for exploring the impact of policy and regulatory framework changes on civilian and military UAS flights that will affect SATCOM procurement by the governments, providing actionable information and perspective to players. The report contains information about key UAS government programs over the next 10 years, potential of SATCOM links for small and tactical UAS, geographical analysis of potential civilian and military UAS SATCOM demand, and the technological and market trends that will drive the UAS and SATCOM industry.

Communication always plays a vital role in the completion of missions throughout the African continent. Imagine the necessity of swift and accurate data transmission during military actions or disaster response within countries such as Angola, Chad, Nigeria, and South Africa.

Previously, African military and humanitarian personnel have found themselves trying to communicate in the midst of total terrestrial chaos and destruction using legacy radio systems and outdated command infrastructure.

These custom-configured “mobile command in a box” TAC-PAK/VSAT systems, manufactured by 308 Systems Inc in Fort Collins, Colorado and supported in Africa by local partners, are follow-ons to previously deployed systems.

The new systems are custom-configured to meet specific mission field communication requirements, including linking field radios to cell phones and computers throughout Ethiopia.  From the base operations in Addis Ababa, Ethiopia, one General said, “These systems are like gold out in the field.”

Military and peacekeeping mission completion is easier said than done, due to the fluid and remote nature of each operation, and the presence of ravaged infrastructure.

Swift, reliable and precise communication is critical, yet tough to attain in remote or devastated terrain. However, the recent deployment of TAC-PAK/VSAT technology from 308 Systems enabled the military forces in Ethiopia, Ghana and Sudan to communicate quickly and precisely.

With multiple form factors and VSAT data rates up to 6Mbps, the TAC-PAK/VSAT flyaway kit combination provided deployment flexibility, operated anywhere with great efficiency, and is packaged in a rugged, small, and highly portable form factor easily loaded into a pickup truck or similar deploying vehicle.  This effectively turned any local vehicle into a “Mobile Command Center.”

Additional products such as the SATPAK wireless relay systems can be combined to ensure teams or organizations have reliable SATCOM and radio signal access from anywhere, including previously signal blocked areas such as mountain valleys, tunnels and urban canyon buildings.

More information is available at http://www.308systems.com

Harris’ newest company addition solidifies the firm's commitment to develop advanced software for tactical radios used by the U.S. military as well as militaries and public safety officials around
the world.

Harris Corporation has opened their new facility in Sunrise, Florida. The 19,000 square-foot facility will support engineering activities and will serve as the Caribbean and Latin America sales hub for Harris RF Communications products and services. Grand opening ceremonies were held on Monday, November 10th.

The following are the positive results of this new building:

The U.S. Navy and Lockheed Martin have delivered the third Mobile User Objective System (MUOS) spacecraft to Cape Canaveral Air Force Station, Florida, where it will be prepared for a January 2015 liftoff aboard a United Launch Alliance Atlas V rocket. 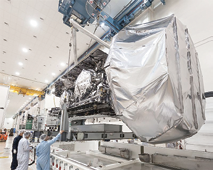 Prior to launch, Lockheed Martin engineers and technicians at the Cape will complete post shipment testing. Lockheed Martin will fuel the satellite’s propulsion system and the spacecraft will be encapsulated inside the launch vehicle’s payload fairing. The encapsulated spacecraft will then be integrated on top of an Atlas V launch vehicle for final integrated testing and closeout preparations for launch.

MUOS-2 was launched and handed over to the Navy for operations in 2013. MUOS-1 was launched and became operational in 2012. These two on-orbit MUOS satellites already are demonstrating new capabilities, especially in the Arctic, an area previously beyond the coverage of UHF satellites and growing in interest for transportation and natural resources exploration above 65 degrees north latitude. In the past year MUOS successfully connected users near the Arctic poles during independent testing by Lockheed Martin—and their industry partners General Dynamics, Rockwell Collins and Harris—as well as during the U.S. Navy’s 2014 Ice Exercise (ICEX) and the U.S. Coast Guard’s Arctic Shield 2014. 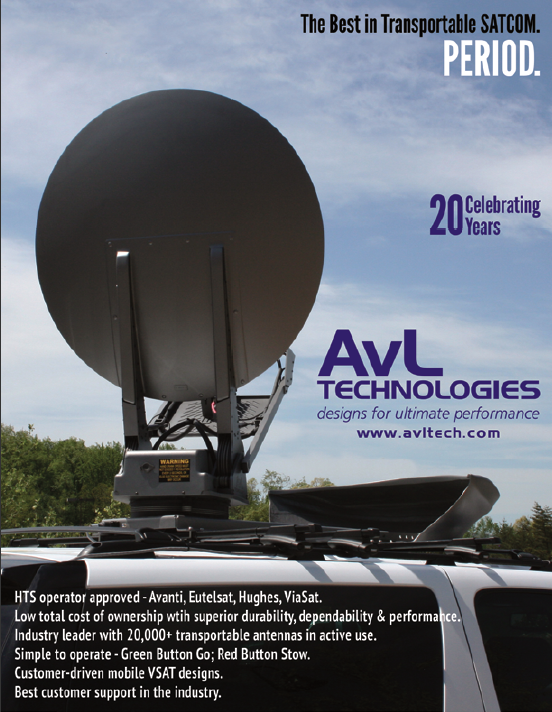