The Space and Missile Systems Center (SMC)’s Innovation and Prototyping Directorate, part of the Space Development Corps, has been encouraged by the success of the organization’s Space Enterprise Consortium (SpEC) in accelerating prototype development and increasing collaboration between the U.S. government and industry partners.

The directorate is particularly proud of the Consortium’s growth, with membership increasing 55 percent year over year since its initiation in 2017. This growth reflects industry and academia’s interest in developing the next generation of war-winning technologies and maturing future architectural concepts.

The U.S. Department of Defense (DoD) is benefiting from the diverse expertise of the 433 members of the Consortium, more than 80 percent of which are non-traditional vendors that have not recently performed work for the DoD. Connecting these new perspectives with the deep knowledge of traditional defense contractors helps ensure that the space systems SMC is developing and delivering will continue to outpace the threat of peer competitors.

One of those Consortium members is Mimyr, a Torrance, California-based company founded in 2017 that provides professional engineering solutions in the fields of satellites, networks and autonomous systems. Robert Kunc, Co-Founder and CEO, said the company had success with some Small Business Innovation Research (SBIR) awards, but was interested in competing for Other Transaction Authority (OTA) programs, which focus on more mature technology.

“When you’re a cog in a huge defense program, acquisition lifetimes are really long and programs can get cancelled,” Kunc said. “On the other hand, SBIR is an amazing, no-risk investment by the government into new technology. But the ‘IR’ in SBIR stands for innovation research and it’s hard to take research from that into mature programs, like CASINO (Commercially Augmented Space Inter Networked Operations, dealing with Low Earth Orbit (LEO) satellite constellations.) We wanted to make something deployed and useful – the stakes are much higher and we wanted that challenge.”

Kunc said Mimyr had heard horror stories about the complex and sometimes convoluted acquisition process for military programs and thought it would be difficult to compete against larger, more established prime defense contractors. But the SpEC process shielded Mimyr from clauses and controls that normally would have stopped a small company from applying, and supported Mimyr with the tools and trust to prove itself.

“I’m sitting next to a guy who’s literally the top expert in space encryption, and he’s asking my opinion,” Kunc said. “(SpEC’s attitude is) ‘We awarded the contract, that’s the end of the reviews, let’s get the job done fast.’ That’s not common in defense acquisition.”

Mimyr not only successfully competed against several larger companies on an equal footing, the company was able to develop a successful prototype to support CASINO operations, he added.

“Technology changes so rapidly — compare the processing power on a laptop today with what was used on the space shuttle,” Kunc said. “The commercial world far out-paces multi-year-(defense industry) acquisition cycles. In order to take advantage of the cutting edge technology commercial industry is using, you need to start relaxing the rules. The commercial world needs to be innovative, it needs to be fast and if you have a difficult process to bring these innovations to the military, you’re going to go out of business.”

At a SpEC meeting last month, Lt. Gen. John F. Thompson, Commander of SMC and USAF Program Executive Officer for Space, cited the book, “How We Got to Now,” by Steven Johnson, which covers the history of innovation and posits that “ideas are fundamentally networks of other ideas.”

“This is one of the things I’m most excited about: seeing the growth of SpEC over the last few years,” Thompson said. “We’re not just building a robust and resilient base of great companies and organizations, but all of us, together, are building up a network of ideas – ideas that the U.S. Space Force will need to maintain our leadership in space and take on the challenges of operating in cislunar space and beyond in the decades ahead.”

Government teams across the DoD have recognized the power of this acquisition tool to access niche prototyping capabilities, resulting in more than 80 awards made on average 40 percent faster than traditional acquisitions, SMC officials said.

As government demand for prototyping under SpEC has increased, so has its ceiling, growing from $100 million for the initial award in November of 2017 to $500 million and later $1.41 billion in April of 2018 and January of 2020, respectively. 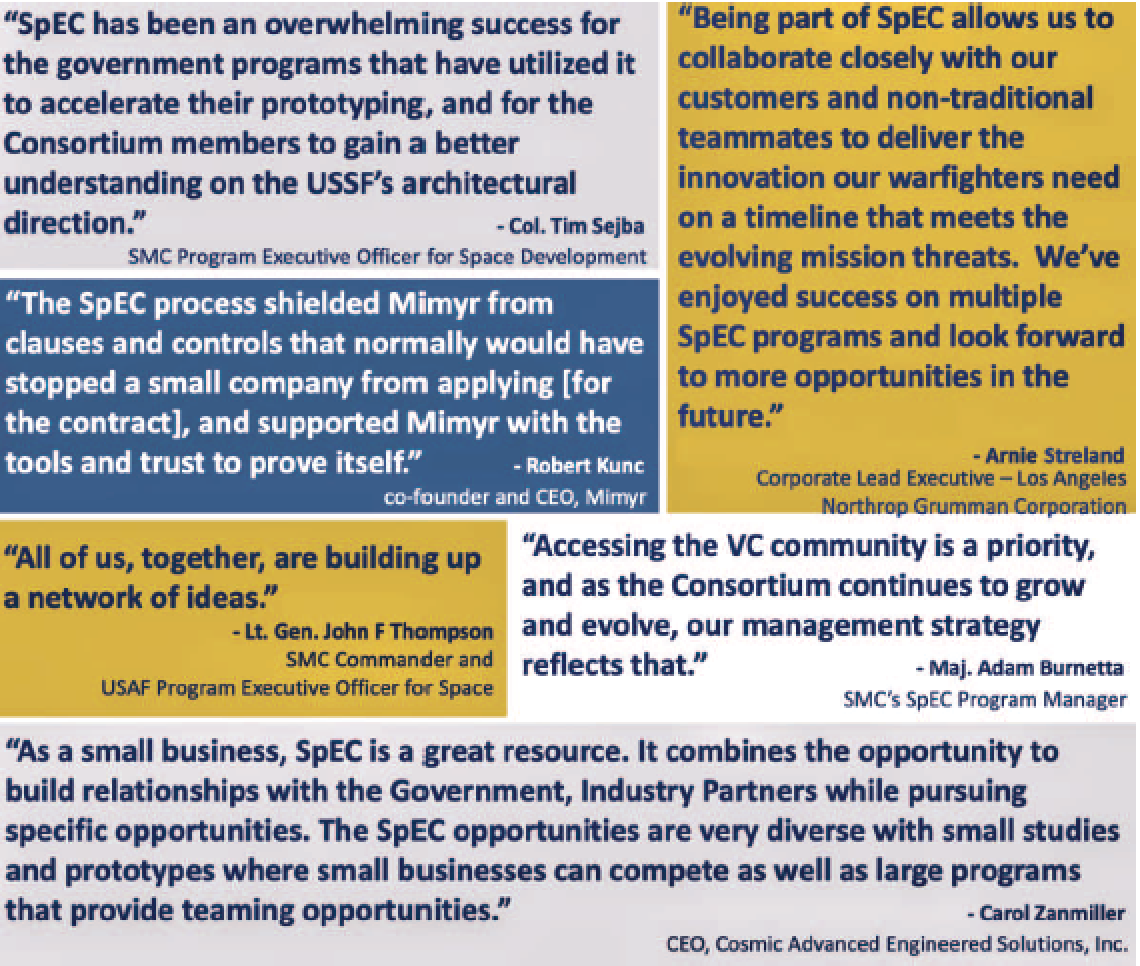 The next iteration of the consortium management agreement, dubbed SpEC Reloaded, which is projected for award in December of 2020, will bring a new $12 billion ceiling. One of the provisions of the SpEC Reloaded solicitation was to address how potential proposers would address facilitating commercial investment in members of the consortium, with the goal of driving increased access to venture capital firms for member companies and potentially increasing the DoD’s use of venture capitalist-funded innovation.

“Accessing the VC community is a priority for our Directorate, and as the Consortium continues to grow and evolve, our management strategy reflects that,” said Maj. Adam Burnetta, SMC’s SpEC Program Manager.

“There’s no question that SpEC has been an overwhelming success for the government programs that have utilized it to accelerate their prototyping, and for the Consortium members to gain a better understanding on the USSF’s architectural direction,” said Col. Tim Sejba, Program Executive Officer for Space Development at SMC. “We’re looking forward to broadening our access to non-traditional vendors under SpEC Reloaded, whether from the brilliant minds in our academic institutions or from the disruptive concepts that can come out of the high growth potential VC-funded community.”
Contact SMC at SMC@spaceforce.mil

Shortly after the United States’ cyber campaign plan was stood up in 2015, the Cyber Resiliency Office for Weapons Systems, or CROWS, was created to advance the Air Force’s enterprise-wide holistic efforts to tackle cyber vulnerabilities.

The cyber campaign plan assesses the landscape across the Air and Space Force acquisition, operations and infrastructure communities, focusing on identifying and mitigating cyber threats and recommending how our acquisition and operational communities operate resiliently in cyber contested environments.

“CROWS facilitates methodologies that assist partners to build more resilient weapons systems,” said CROWS director, Joseph Bradley. “One of the foundational challenges to changing the Air Force’s approach to cyber threats is cultural adoption — how best to embed an understanding of cyber into the culture of every airman.” 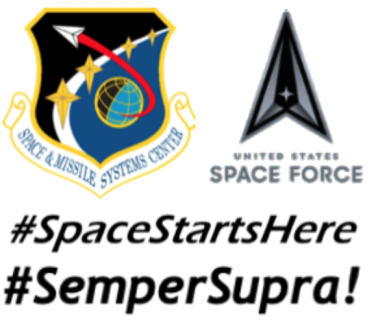 CROWS enables SMC and the acquisition community to assess and protect the fielded fleet against cyber vulnerabilities and to bake cyber resiliency into new weapons systems. This is done through delivering tools, training programs, cyber intelligence and guidance to institutionalized cyber resiliency requirements in systems engineering, testing and contracting activities across the entire acquisition life cycle.

“CROWS deploys consistent yet scalable methodologies that nestle into the acquisition timeline and assist program officers in understanding their cyber posture,” Bradley said.

“This in turn allows partner organizations to understand their risk — an important step in collaborating to devise and prioritize mitigation strategies.”

In 2018, CROWS and SMC partnered in the development of a space cyber test range which provides space weapons systems the capability to increase system resiliency and survivability by identifying and assessing vulnerabilities, testing mitigation options, verifying patches and providing cybersecurity expertise for ensuring critical functions successfully operate at mission completion. 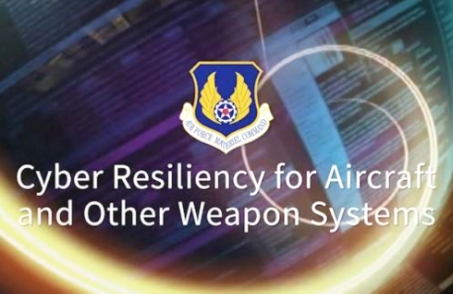 A new space enterprise critical component information cell and hardware/software examination capability will deliver fast, accurate and space-relevant assessments of the trustworthiness of vendors and their products so that acquisition professionals can meet the requirement for supply chain security of critical components.

The space enterprise critical component information cell consists of analysts and engineers from SMC, Pacific Northwest National Laboratories, and the Air Force Office of Special Investigations. Given vendor or critical component lists from space programs, these experts rapidly examine or source all publicly available information to report foreign influence on vendors, financial stability, past performance, product reputation and other indicators of vendor trustworthiness.

In Fiscal Year 21, SMC is partnering with CROWS on a shared-cost effort on the Space Vehicle Cyber Defense Payload, which develops the second of two low-size, weight and power on-orbit cyber defensive payload prototypes that mitigates the increased adverse persistent cyber threats and risks to blue legacy and future space vehicle systems.

Collaboration is also exemplified in the stand-up this year of Space ISAC, a global-focused intelligence sharing group comprised of representatives from U.S. Space Force, the Department of Homeland Security, and NASA to facilitate teamwork across the global space industry to enhance our nation’s ability to prepare for and respond to vulnerabilities, incidents, and threats. Working groups in the cyber and the space environment share information and help with identifying and working through the gaps in space legacy systems.

While space and air are different domains and mediums, the technology that underwrites them is shared across both. And as such, air and space can and will leverage efforts and best practices.

Collaboration for Resilience in Space, Cyber, and Acquisitions

The majority of currently fielded weapons systems were designed in a pre-cyber contested landscape. Foundational challenges have been identified, but awareness to actual system vulnerabilities is low due to the limitations of cyber security testing.

The question then becomes: what is the Department of the Air Force doing to make our nation’s weapons systems more resilient to outside attacks. The answer, thankfully, is they are doing quite a lot.

The specific initiatives, processes and methodologies currently in place to identify and mitigate vulnerabilities are strong, panelists said. SMC demonstrated this strength at its virtual cyber expo centered on cyber resiliency — bringing together government, military, industry and academic experts for discussions about some of the most important aspects of cybersecurity as a warfighting domain.

When asked, what will be required to maximize the space domain with U.S. allies and industry partners?, panelists shared the need for faster advancement where everyone takes a piece of the mission and progress is parallel. This improves performance as it allows everyone involved to focus on fewer things. That sharing piece is increasing productivity and is a key aspect to achieving future success.

Other discussion points included the need to trust others in the space domain and the importance of sharing data and different parts of space missions. With space being the ultimate place for globalization, panelists agreed the greatest barrier to collaboration is establishing trust.

This is an operational shift; however, collaboration with international partners, industry partners, and other government agencies is the key to success. We all have to trust our future in space with others.