A major challenge for the U.S. military is providing reliable voice and data links to small units of warfighters operating in remote, hostile corners of the globe. In Afghanistan, land-based wireless infrastructure is lacking, and mountains and harsh weather conditions often disrupt radio and satellite transmissions to troops at the edge of existing military networks. 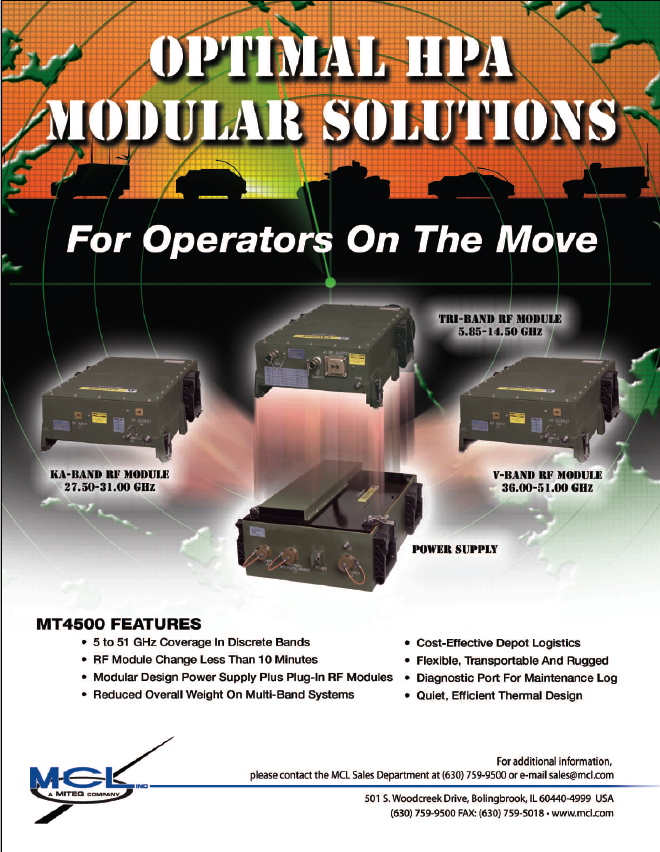 The Pentagon is moving to fill those needs and hopes to close a looming capability gap as work continues on the Mobile User Objective System (MUOS), a military satellite constellation under development to replace the aging Ultra High Frequency Follow On satellites. Given the growing demand for bandwidth, it’s likely the U.S. Department of Defense will continue to rely on a mix of government and commercial satellite assets.

One promising commercial solution already in the hands of some U.S. troops is the satellite-based Distributed Tactical Communications System (DTCS). This “push-to-talk, one-to-many” radio communications system is being produced by Iridium, a mobile satellite service provider based in Bethesda, Maryland, and industry partners Boeing Company and ITT Corporation.

In June, the U.S. Naval Surface Warfare Center in Dahlgren, Virginia, awarded a five-year, $21.6 million indefinite-delivery, indefinite-quantity contract to Iridium’s Government Programs subsidiary to expand its capabilities. Designed around Iridium’s constellation of 66 low-earth-orbiting (LEO) satellites, DTCS is an extension of what the company calls “Netted Iridium.” The netted aspect enables a warfighter equipped with a modified, commercial off-the-shelf radio handset to talk or send narrowband data files over one channel to many listeners within designated user “nets.” This multicast architecture enables tactical communications by advancing beyond the typical person-to-person satellite phone connections.

Iridium’s constellation of cross-linked satellites provide near real-time voice and data links in places where the military’s geostationary satellites or line-of-sight communications systems often cannot. Troops operating in a deep mountain valley, for instance, often can’t pick up a geostationary satellite’s signals unless they move to higher ground. DTCS is shifting paradigms in the way disadvantaged, dismounted warfighters acquire and use voice and data for beyond-line-of-sight (BLOS), over-the-horizon (OTH) and on-the-move (OTM) communications, according to Igor Marchosky, DTCS program manager for the Naval Surface Warfare Center. 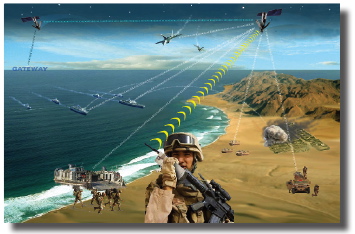 “With DTCS, the LEO satellite assets will find you, and not the other way around,” Marchosky said. “If you can see the sky, eventually you will have comms, and that is particularly useful in mountainous terrain.”

Since the DoD began testing Iridium’s netted technologies in 2006, DTCS has evolved rapidly. Within two months in 2008, for instance, the Naval Surface Warfare Center’s Harsh Environment Lab (HEL) at Dam Neck, Virginia, produced a handset prototype that featured miniaturized and ruggedized electronic circuitry. To guard against the cold, the devices were equipped with sensors that activate internal heaters to warm the liquid crystal display when temperatures drop, said Rob Anderson, HEL’s program manager for DTCS.

Around 100 of the handheld radios currently are in use by U.S. troops in Afghanistan, including two Provincial Reconstruction Teams, whose primary role is to win support of local villagers. By the end of 2009, around 1,000 of the devices are expected to be deployed in the Middle East, said Scott Scheimreif, Iridium’s vice president of government programs. The radios weigh about a pound and have GPS embedded into the electronics, providing a position location indicator similar to Blue Force tracking. It’s relatively easy to use, with one knob for volume, one knob to select channels and a push-to-talk button.

“One of the primary things Iridium has focused on is reducing combat load,” Scheimreif said. “The original customer was the guy on the ground who has to carry all the tools and solutions he needs to survive in the field. This device can replace two or three pieces of hardware, especially in the case of BLOS and Blue Force tracking capabilities.”

Work under the five-year contract will focus on upgrades to the handheld device, and expanding the range and number of user networks. ITT is leading efforts to improve the tactical radio, including development of an advanced radio, called the C2, that will feature a built-in PDA and give users web-based computer capability.

To hold down development and life cycle costs, DTCS uses commercial-off-the-shelf components. The radios, for instance, are powered by CR123 lithium batteries that troops also use for flashlights and other equipment. They also are compatible with the H250 tactical headset, one of the most ubiquitous in the field. The devices can be easily installed in up-armored vehicles and quickly removed, and are being tested in medevac and troop transport helicopters.

Boeing, which operates and maintains Iridium’s constellation, is overseeing software upgrades to the satellites to expand the capacity and range of user nets. The system currently supports around 250 unique nets — each with its own encryption and security keys — and offers reliable coverage of 100 miles for users within a net. The improvements aim to expand the user nets to 2,000 and increase the range to 250 miles .

DTCS operates much like a trunked-based radio, in which a pool of users share a range of frequencies. The individual nets can be divided up, such as nets for command and control, medevac and fire support. Users in each net are assigned a channel number, and the radio will scan for traffic on other nets where a user has access. 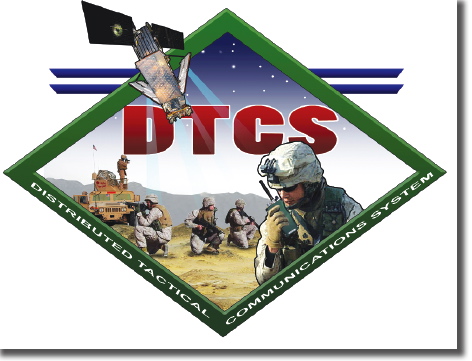 Users don’t have to worry about dialing in a specific frequency, or requesting a channel or time slot. All they do is select a channel. When a user pushes the talk button, the satellite network automatically assigns a frequency based on availability and alerts other users in the net. Ongoing research and development will focus on providing more secure protection of data while preserving the ability to share information across military communities, including coalition forces in theater.

User feedback has been encouraging. DTCS offers the best potential to date for fulfilling command and control on-the-move, says Brig. Gen. Mark Bowman, director of Central Command’s J6 Command, Control, Communications, and Computer Systems directorate. “In my opinion,” he said, “Netted Iridium will be the most significant tactical communications improvement developed and fielded during the Global War on Terror.”

DTCS’ spiral development has focused on rapidly deploying and improving prototypes based on user input from the field, a process that has cut development time and produced a product tailored to customer needs.

“What we’re hearing is that they are getting the ability to communicate in places they’ve never been able to before,” Marchosky said. “The majority of feedback is not ‘I can’t communicate,’ but ‘I would like a radio with this shape, or this form, or this kind of pouch or button.’ “It’s not a matter of capability, and that in itself is a major success. So, the billions of dollar problem has been solved. Now we’re looking at a thousands of dollars problem.”