Throughout the ages, Afghanistan has been at the crossroads of many empires. The area’s people and territory have faced conquest by the Greeks, Arabs, Mongols, Turks, British, Soviets and, following the September 11 attack on New York’s World Trade Center, the United States. 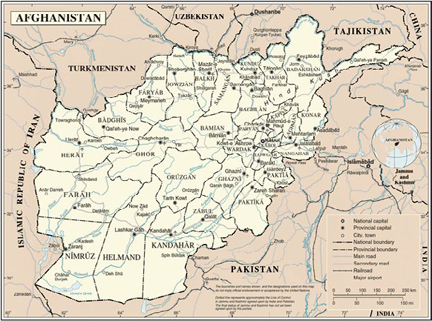 This turbulent history, the rule of the Taliban and six years of civil war, have left Afghanistan a legacy of widespread poverty, decimated infrastructure, and, quite possibly, the largest concentration of land mines on Earth. Few nations in the 21st Century face the challenges that confront the nation’s first democratically elected government today.

Communications have been essential to those who govern since the days of news travelling no faster than a horse could gallop. Recognizing the importance of communications, the World Bank issued a request for a proposal (RFP) in 2003 to construct a Government Communications Network (GCN) for Afghanistan’s Ministry of Communications. The aim of the RFP was to provide voice and data services to ministries and government offices in Kabul, Afghanistan’s capital, and to the provincial capitals, as well.

The winning bidder was Globecomm. But there may have been days when company executives wondered if winning the bid was such a great idea.

Changing Requirements
“The environment is about as challenging as it gets,” said Globecomm vice president Paul Knudson, who manages the Afghan projects for the company. “Outside Kabul, there is little or no infrastructure, no roads and no electricity. Security is a continuing concern. We have had to unload trucks in the middle of nowhere, hand-carry electronics across a stream, then get the truck across and reload it.”

To make matters even more complicated, no sooner had the project been awarded than the specifications began to change. Globecomm discovered that the Ministry of Communications had, under a separate contract, had purchased CDMA mobile switches from a Chinese company. They were providing local mobile service in “telecom islands” but had no outside connections. Interconnecting the switches and linking them to long-distance circuits became an unexpected priority. “It was a fundamental change,” said Globecomm vice president Paul Johnson, who is the account executive for Afghanistan. “What we had originally planned to be a private network rapidly became a public network. We are, in effect, the backbone for a public telephone system, providing bandwidth, trunking, bringing traffic back to Kabul and providing international voice, video and Internet service. That’s in addition to meeting the government’s urgent need for connectivity.”

Another important change involved the identity of Globecomm’s client. Globecomm developed each project under the management of the Ministry of Communications. However, when the Ministry accepted systems upon completion, the assets were then transferred to Afghan Telecom. “The goal was to make the Ministry a true regulatory body,” said Paul Knudson, “while Afghan Tel became the operator. With each new network, Afghan Tel gains assets and increased value that improved its ability to attract outside investment.”

Multiple Projects
The IP-based Government Communications Network (GCN) links 42 ministries and offices in Kabul via fiber and microwave, and extends this core network to 34 provincial capitals via satellite. Satellite bandwidth also links dozens of CDMA mobile switches in the provinces with Globecomm’s SatCell hosted switching system in the United States. All calls taking place within the footprint of each CDMA switch remain local, while calls between the switches, or outside Afghanistan, are routed through Globecomm’s Network Operations Center (NOC). The GCN turned out to be the first of multiple projects awarded to the company by Afghanistan’s government.

What followed the GCN implementations was the District Communications Network (DCN), funded by US AID, which aimed to push service into rural areas. Globecomm designed, installed and commissioned a satellite network connecting a hub in Kabul to police, fire and other essential services in each of Afghanistan’s 337 legislative districts. The DCN provided voice and thin-route data as well as Internet access. Ongoing demand for the DCN has been tremendous, and Globecomm continues to work with Afghan Tel to expand the business plan and bring more revenue into the network.

IP-Based Platforms
The international gateway for voice, data and video, came next—this was funded by the Afghan Reconstruction Trust Fund (ARTF). The Ministry originally specified a DCME network, the accepted technology, but accepted Globecomm’s recommendation for an IP platform that was less expensive and far more flexible. In addition to gateway service for Afghanistan, the ARFT also provides a backup satellite facility for the GCN.

In two other projects, Globecomm has installed PABX switches at National Army bases throughout the country and has integrated them into an existing VSAT network. Also provided was a custom-designed satellite truck to the Ministry for mobile spectrum monitoring. With so much of the nation’s telecommunications depending on satellite, the truck allowed the Ministry to more effectively regulate spectrum, issue licenses and shut down illegal operators.

Paul Johnson gives much of the credit for Globecomm’s in-country success to its Afghan partner, Watan Telecom, and its Chairman and CEO, Mr. Rateb Popal. 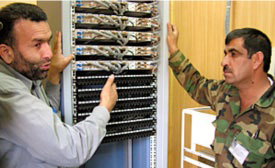 “Mr. Popal worked with us early on to ensure that resources were in place to train the people needed to carry out the installation and commissioning of the work. Together, we have built the capacity of the Afghan workers and transferred a great deal of technology ‘know how.’ We now have Afghan technicians supporting the programs as they move from deployment to network operations and maintenance. I have been really impressed by their desire to learn and their level of commitment.”

“The people of Afghanistan are thirsting for improvement in the quality of their lives,” said David Hershberg, Chairman and CEO of Globecomm. “Our work is helping to meet that need. You can’t possibly build an effective government without reliable communications. We’re helping newly-elected legislators and cabinet members understand what it takes to legislate and govern. Our network provides videoconferencing among provincial officials so they can learn from each other and work together.

Communications creates opportunities for commerce, to obtain finance and credit, to interact with NGOs and with the government. We’re incredibly proud to be making this contribution, and endlessly impressed with the determination of our employees, partners and customers in Afghanistan.”