Each quarter, the Naval Postgraduate School (NPS) facilities at California National Guard’s Camp Roberts play host to events organized by the Joint Interagency Field Experimentation Program (JIFX), under the sponsorship of the Office of the Secretary of Defense and the Department of Homeland Security. 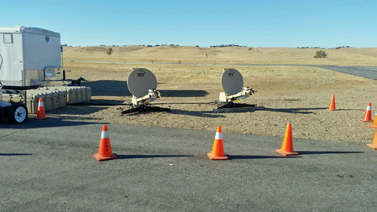 These events provide the military with the ability to conduct field experiments on new resources and technologies to assess if they could potentially improve operations for the military, disaster response, and emergency management. They also provide a cooperative learning environment where military personnel come together with other federal, state and local agencies to identify best practices and new ways in which technology improves operational efficiency, effectiveness and mission assurance.

Earlier this month, I had the opportunity to attend a JIFX event at Camp Roberts that was testing out the use of the SES O3b Medium Earth Orbit (MEO) satellite constellation for the distribution and dissemination of 4K video. The project—entitled the NPS Video Cloud System Project—was intended to test interoperable communication solutions in network-denied disaster response environments.

Effectively, the government was looking to use advanced computer hardware and video codecs, in conjunction with MEO satellite services, to, “…stream live 4K video via satellite from remote locations in support of military public affairs organizations.” 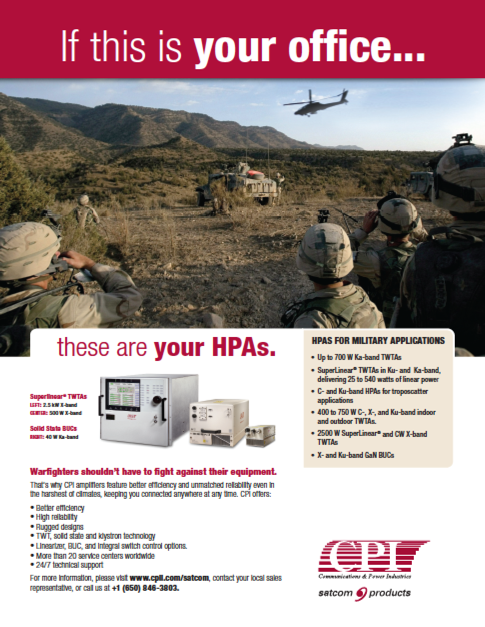 Challenges
The JIFX test—which proved to be extremely successful—is an indication of things to come for America’s military. Data distribution and sharing requirements are increasingly important in everything that the military does and will only grow in the future. As such, the types and sizes of files being sent are shifting rapidly.

Today’s military is looking for ways to send more data than ever before. Even with advanced codecs, compression technologies and specialized hardware, essential communication capabilities such as video teleconferencing (VTC), 4K video and real time mobile applications use much more bandwidth than what the military traditionally sent over its networks in the past.

The ability to transmit and receive these files efficiently and with zero packet loss is why MEO satellite constellations are such an attractive option for the military. These satellites have the same ability as GEO satellites to deliver data, voice and video into practically any geographic location—particularly to those with no or little terrestrial network infrastructure.

However, in contrast to GEO satellites, MEO satellites are approximately one quarter the distance from Earth. This proximity enables the constellation to deliver higher throughput (up to 600 Mbps/600Mbps) with much lower latency (less than 200 milliseconds, end-to-end). This equates to delivery of a fiber-like connectivity from space.

The JIFX test focused on transmitting 4K video for public affairs teams, however this application is just one of many for this technology in the military. Here are a few more:

• ISR—Delivering 4K and HD video reconnaissance and intelligence to and from battlefields to improve situational awareness
• Large file transfer—Transmitting of today’s large files (100 GB in 27 minutes) – from video to large datasets – between warfighters in the field and senior decision makers.
• Interactive, real-time applications—Powering the use of mobile applications that request data in real-time for full effectiveness and capability.
• 4G LTE bubbles—Using MEO satellites for mobile backhaul to power pockets of 4G connectivity and enable the use of military mobile devices and other technologies.
• Morale, Welfare and Recreation (MWR)—Delivering Internet connectivity and social media access for warfighters in the field 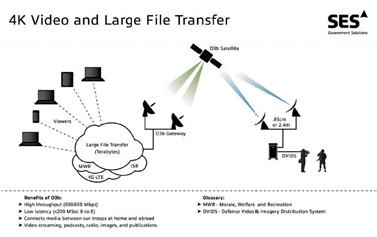 Analyzing The TCO For MEO
MEO satellite constellations are built for delivering large amounts of data with low latency.  MEO delivers that capability efficiently and cost effectively, which is essential for the military today. In fact, there are multiple concepts of operation (CONOPs) that are ideal for MEO satellite constellations, most involving the transfer of large amounts of data traffic (100 Mbps).

In these specific large data application scenarios, the military has examined the TCO of MEO—and they like what they see.

MEO constellations are built for high bandwidth applications. In contrast to GEO constellations, MEO offers a much lower cost per megabit alternative. Considering how much bandwidth could be used transmitting real-time data or live streaming 4K video, the bandwidth per Mb price truly comes in to focus.

Overall, the use of MEO satellite constellations for high bandwidth implementations can save as much as 25 to 50 percent of what it would cost for the same amount of throughput on a GEO constellation. Over a very short time (less than six months), this results in significant savings for the US government, making year-over-year operation extremely economical as compared to GEO.

That being said, MEO satellites will never replace GEO for all military implementations and uses. In many CONOPS, GEO is still the better solution. 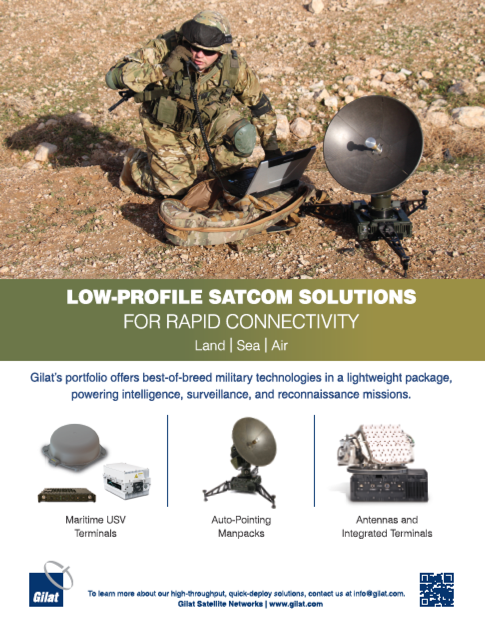 When GEO Bests MEO
Having spent the better part of 900 words extolling the benefits of MEO satellites, it would be a disservice to readers if I didn’t mention that MEO constellations are not the superior choice in all instances. In fact, legacy GEO satellite constellations, as well as newly emerging High Throughput Satellite (HTS) constellations, will continue to break new barriers in service.

Evident in the image below, MEO beams (450 miles diameter) cover significantly less area than GEO beams. This means that any CONOP that requires moving over large distances will obviate the need for GEO. GEO beams cover so much geography that any movement within a relatively large area will still be covered—most likely by the same GEO beam.

GEO connectivity is important to the military, since warfighters, camps, and vehicles that require connectivity do not always stay in one place. In fact, they are often mobile over a wide geographic region. In these instances, the small coverage area of a MEO satellite beam is trumped by the more ubiquitous GEO beam.

IT and data are essential for our modern military, and the bandwidth demands of the next generation solutions and IT capabilities that the military is utilizing in the field are rising. The military needs high throughput connectivity in network-denied areas. MEO is the only solution that can deliver the fiber-like connectivity the military needs, without the physical fiber—and without breaking the bank.
www.ses-gs.com/govsat/

Devastating emergencies such as earthquakes and tsunamis wreak havoc on local infrastructure and existing communication capabilities—this has been more than evident with Hurriance Matthew's destructive paths through the Caribbean and along the east coast of Florida. 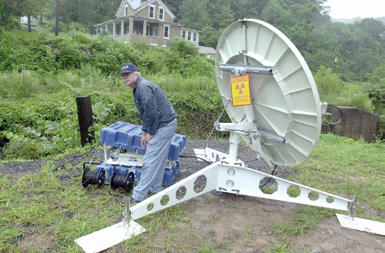 SATCOM also enables drones to relay real-time intelligence and situational awareness, identification and communication of ingress and egress routes and facilitates assessments detailing whether emergency responders could be in immediate danger.

These volatile situations also require video conferencing capability between emergency personnel and senior leaders so that they can evaluate conditions on the ground.  Given the likely destruction of pre-existing capabilities, SATCOM may be the only alternative.

SATCOM Brings The Backup
We saw in the wake of many recent disasters and emergencies that radio communications and networks can be brought down due to damage to terrestrial infrastructure or the simple overloading of networks. This was especially true following Hurricane Matthew's, Superstorm Sandy and 9/11 in and around New York City, where the sheer number of family and friends trying to check on their loved ones overloaded networks and made it impossible to connect via mobile device to anyone on the ground.

This is a real concern that can derail a coordinated emergency response effort, and is only exasperated by the natural restrictions of radio networks—including line-of-sight limitations.

That’s why Commercial SATCOM (COMSATCOM) is becoming a desirable back-up for nations looking to build redundancy and resiliency into their disaster and emergency response communications networks.

Satellite communications aren’t restricted by line-of-site requirements and can be more resilient than radio networks.

By deploying mobile terminal systems, satellites will continue to operate through earthquakes, tsunamis, hurricanes, floods, terrorist attacks and any other emergency situations – ensuring that the flow of information is never compromised. 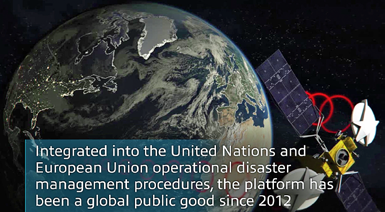 Emegency.lu
Emergency.lu is a global multi-layer platform for the international humanitarian community that aims to improve the worldwide preparedness and rapid response capacity by filling the communication gap in the first hours and days after a disaster.

When a natural disaster strikes, it is vital that those needing help have access to a system that provides efficient and critical communications. But with terrestrial services often damaged, disrupted, or becoming overloaded by people phoning for help, providing a connection with the rest of the world is often a difficult and lengthy process.

This is where emergency.lu comes in. Since emergency.lu is a multi-layer platform consisting of satellite infrastructure and capacity, communication and coordination services, satellite ground terminals for rapid as well as long-term deployment and transportation of equipment to the disaster area within the first 12 to 20 hours.

Emergency.lu can restore communication capabilities quickly and thus enable efficient rescue efforts or information flow from those affected to their loved ones.

The 24/7 basis of the emergency.lu platform is an innovative, end-to-end service for the international humanitarian community. This pioneering platform has improved the effectiveness of rapid response.

Nexgen Emergency Comms
With the emergence of high throughput satellites (HTS), and next-generation LEO and MEO constellations that offer incredible throughputs and low latency, COMSATCOM has become a viable alternative for delivering voice, video and data—regardless of how much bandwidth is required.

Today’s disaster and emergency response is more effective than ever before. It works quickly to stem the amount of property damage, reduce the number of casualties and works to ensure the safety of the emergency responders providing relief.

To accomplish this, emergency response teams rely on constant communication and collaboration. Nations are increasingly turning to COMSATCOM to deliver the resiliency and redundancy they need to ensure the networks driving communication are always on and always available— regardless of the conditions on the ground.
www.ses-gs.com/govsat/

Kevin Benedict serves a the Vice President of Business Development at SES Government Solutions, where he
leads a team of exceptional business development professionals tasked with providing the US government with a suite of satellite services and end-to-end satellite communications solutions.

Anyone who has ever witnessed the ferocity of a hurricane, or the terrifying devastation of a tornado knows all too well the destructive ability of Mother Nature. 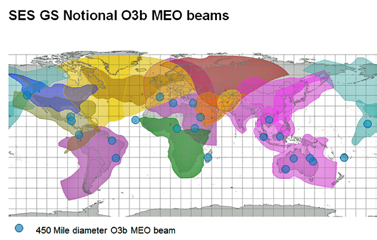 Luckily, when natural disaster threatens the United States, we have an agency responsible for providing warning so that citizens can prepare, take shelter or even evacuate, if necessary.

That agency is a component of the National Oceanic and Atmospheric Administration (NOAA) called the National Weather Service (NWS), and its ability to effectively accomplish its mission really can be the difference between life and death for American citizens.

In June of this year, the National Weather Service Office (NWSO) at Pago Pago, American Samoa signed a contract with SES GS for a new tool to help them accomplish their very important mission—a highly reliable, low latency link for passing critically important weather information between the NSWO in Pago Pago and the NWS headquarters Office on Ford Island in Honolulu, Hawaii.

This contract with SES GS was notable for two reasons. 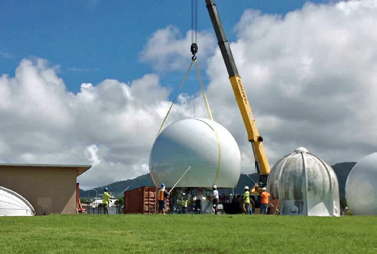 Second, the contract signed between the NWSO in Pago Pago and SES GS was not just for the lease of some satellite capacity, but rather for a complete satellite managed service. This decision to move forward with satellite as a managed service is a revolutionary, innovative step forward for the federal government, since managed services are widely considered the more economical and efficient acquisition model that is the future of the satellite industry.
www.ses-gs.com/govsat/

These articles are republished, courtesy of GovSat Report (ses-gs.com/govsat), and Executive Editor Ryan Schradin. He is a communications expert and journalist with more than a decade of experience and has edited and contributed to multiple, popular, online trade publications that are focused on government technology, satellite, unified communications and network infrastructure. His work includes editing and writing for the GovSat Report, The Modern Network, Public Sector View, and Cloud Sprawl. His work for the GovSat Report includes editing content, establishing editorial direction, contributing articles about satellite news and trends, and conducting written and podcast interviews. Ryan also contributes to the publication’s industry event and conference coverage, providing in-depth reporting from leading satellite shows. The GovSat Report is sponsored by SES Government Solutions (ses-gs.com/govsat).