SatNews Publishers is the official Media Sponsor for the FIRST NAB Military + Government Summit at the NAB 2009 Exhibition and Conference. Should you wish to consider editorial content for either the March issue of MilsatMagazine and/or SatMagazine, which will be printed and distributed at this premiere event, please contact Hartley ASAP and let's chat!

Today’s military, government and first responders push high-quality imagery capture to levels not possible in the past. Now you can gain an edge in this content-rich environment, one that dramatically improves operations on the ground, in the air and at sea, at the NAB Show’s first-ever Military and Government Summit.

The three-day Summit, produced in partnership with Harris Corporation, Raytheon, ITT, and other leading defense organizations, is supported by the Under Secretary of Defense for Intelligence (USD(I)), and will be held from April 21-23, 2009, at the Las Vegas Convention Center in Las Vegas, Nevada.

The Summit will identify ways in which government and military officials can use commercial video technologies for defense and emergency response applications. Plus, attendees will have access to the NAB Show floor — the world’s largest video marketplace, which opens on Monday, April 20th.

The Summit will feature an opening keynote by Kevin P. Meiners of the Office of the Under Secretary of Defense for Intelligence (OUSD). The Summit’s education program will be led by conference chair Commander Joseph A. Smith, U.S. Navy, Military Deputy Sensor Assimilation Division (ASX), National Geospatial-Intelligence Agency. (Please see his interview in this issue of MilsatMagazine)

“The Summit will unite government and non-government officials to examine the strong role video technology plays in military applications,” said Commander Smith. “As the world’s largest digital media event, the NAB Show provides the perfect platform to examine this issue.”

The NAB Show floor offers attendees the opportunity to explore solutions enabling situational awareness, IPTV, digital asset management, emergency communications and more. To register or for more information, select the graphic below — we hope to see you at this highly informative NAB Military + Government Summit.


Select this graphic for additional Session and registration information... 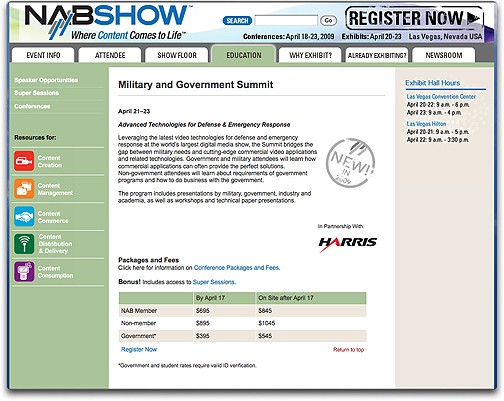 About The NAB Show The NAB Show will take place April 18 - 23, 2009 in Las Vegas (exhibits open April 20th). This is the world’s largest electronic media show covering filmed entertainment and the development, management and delivery of content across all mediums. Complete details are available at NABSHOW.com.

The National Association of Broadcasters is the premier advocacy association for America’s broadcasters. As the voice of more than 8,300 radio and television stations, NAB advances their interests in legislative, regulatory and public affairs. Through advocacy, education and innovation, NAB enables broadcasters to best serve their communities, strengthen their businesses and seize new opportunities in the digital age. Learn more at NAB.org.