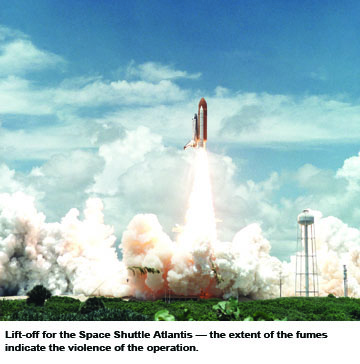 Picture, if you will, a multi-million euro altar to the triumph of function over form, precisely oriented and silently gliding on its orbit around Earth in a smooth, graceful state of free fall. Satellites appear serene and fragile in their often ungainly forms, designed for a life in orbit, untroubled by the Earth-bound stresses of gravity and vibration. But they are not.

That same ungainly mass of technology, with its solar arrays not yet extended, must endure being stowed as the payload of a launch vehicle. The satellite must survive the noise and subsequent vibration of the ~145 dB interaction between the rocket engines and launch-pad environment, the jarring transonic climb phase, pyroshock as stages separate, turbulent boundary layer excitation, and the list goes on. These forces can induce fatigue in resilient metal structures, not to mention the sensitive electrical components of satellites.

The space industry probably has the most demanding requirements of vibration testing anywhere in the world. Given the huge stresses involved during launch, and the fact that you cannot easily repair a damaged satellite once it has been deployed, it’s vital that the system has been thoroughly tested before the violent ride into orbit!

Shaking + Shocking
Vibration testing, in brief, is shaking or shocking a component or assembly to model real-world conditions and seeing how it will stand up to them. Conducting these tests in the field or the laboratory involves the use of controllers, instruments, data analyzers, climatic chambers and vibration exciters. 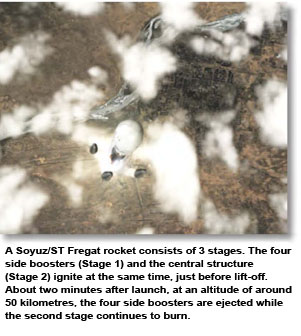 Even though the development of vibration testing techniques quite naturally have been closely connected to aerospace and space, it might be worth mentioning that vibration testing, often supplemented by shock and bump testing, is also used today in many other fields. Typical examples are packaging (for example, for shipping flatscreen televisions that should arrive in your home flat and not buckled) and the automobile and agricultural machine industries.

The concept of vibration testing as we know it today is relatively new and has been intensively developed and continuously refined since its origin during World War II. The impetus for its development was the desire to test parts and equipment for use in aircraft before a first flight.

Even then, structural and mechanical failures due to vibrations were not the only problems. The use of complicated electronic and electro-mechanical equipment made control systems and communication instrumentation sensitive to the vibrations encountered during mobile operation.

Leveraging on the experience gained from aircraft work, the aerospace industry has taken on-board vibration testing as one of the main parameters of overall environmental testing. Environmental testing of satellites tries to ensure that the odds of Murphy’s Law coming into play are significantly reduced. Vibration testing is concerned mainly with what is happening around the satellite during launch — one could say under the influence of Earth’s gravity. Once in space, the effects of vacuum and extreme temperatures are in focus. For these tests, satellites are put into vacuum chambers cooled down to temperatures below –100°C, or exposed to artificial sunlight, typically at 1.4kW/m2 – the intensity normally experienced in orbit. 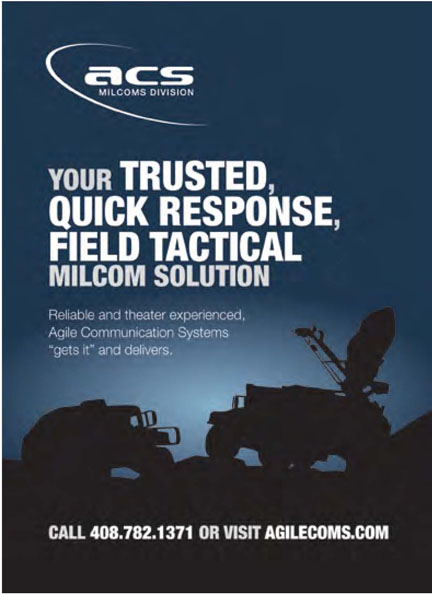 Testing Regimes
The seriousness of malfunctions due to vibrations is, of course, greatest in manned vehicles where human life is at stake, but protecting the multi-million euro investment made in satellites is also high on the seriousness scale. Vibration testing is a prized tool for establishing the make-or-break robustness of components, subsystems and fully assembled craft. Depending on the stage of a project, different testing regimes are adopted.

Design qualification tests are usually carried out on the structural model during the development phase in order to demonstrate that the design enables the equipment to withstand the vibration level it will see during launch, plus a qualification margin. The tests also allow verification of the spacecraft mathematical model by measuring motion at “resonant frequencies”, at which elements of the spacecraft structure are prone to self-vibrate once vibration is initiated.

Acceptance tests are carried out on the flight model in order to verify workmanship and ensure that the equipment does indeed operate satisfactorily in its final configuration, and will not degrade when subjected to the vibrations encountered during launch.

– Shakers, Exciters + Systems
Shakers, or vibration exciters, come in a variety of sizes and operating configurations. The shaker might be small with a permanent magnet for the field, or large using an electromagnet for the field. Also, as more electrical power is used, more current flows and more wasted heat energy is produced, so small or medium shakers can be cooled using ambient air, while larger shakers require a water cooling system.

The LDS V900 series of water-cooled shakers has a long-established reputation in aerospace and space industries. Water-cooled shakers are able to deliver higher forces than equivalently powered air-cooled shakers. The water cooling is applied to the field coils and results in quieter operation and a cooler body temperature, minimising the temperature effects on the equipment under test. This makes water-cooled shakers ideal for applications requiring high forces, or large payloads tested for short durations.

The absence of air blowing around the shaker and test equipment makes water-cooled shakers particularly appealing in clean-room environments or when testing hazardous materials.
Accelerometers are used to measure the applied vibration levels in gravitational units. They can be used to control the test by sending feedback to the controller, or to measure acceleration and act as a monitor on the unit under test.

The controller interfaces with a computer to allow the operator to enter test parameters and observe channel information. The controller will provide a low voltage drive output to the power amplifier by using a closed-loop control method. It constantly monitors and modulates the output drive signal to meet a programmed specification. 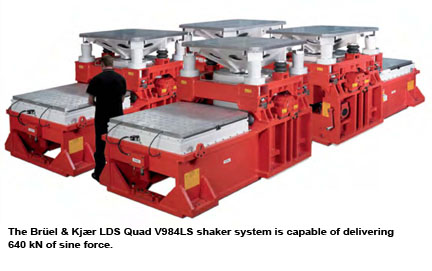 The operator is responsible for correctly attaching the unit under test to the shaker, attaching accelerometers, and general preparation of the setup. Finally, the operator programs the controller and observes the vibration test to completion.

– TestingTypes
There are three characteristic modes of vibration testing that are usually done in satellite testing. Sine testing involves subjecting the test item to a progressive sweep of frequencies and amplitudes, random testing randomises this progression, and shock testing induces a sudden severe excitation, simulating the shocks felt during stage separations and engine firings.

One form of sine test is a resonance search. This is a low amplitude sine sweep run from a low frequency to a higher frequency, usually at a constant logarithmic rate, to search for any natural resonances within the unit under test. Typically, a transmissibility or transfer function plot is produced to show the ratio of response to the controlled input.

Another form of sine test is an endurance test. This is applied to the unit under test by sweeping up and down over a frequency range for a specified number of sweeps or a test time, typically hours. This test does not simulate a real-life environment, but does test for material fatigue. 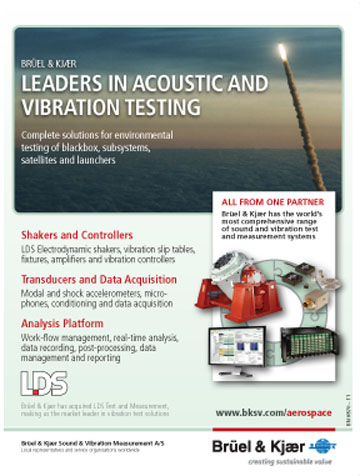 For a more realistic simulation of a real-life environment, broadband random vibration is used. The random vibration excites a defined band of frequencies. The resonant frequencies of the unit under test are excited regularly together to cause and show interaction.

For a shock test, a rapid pulse of short duration and high energy is imparted to the unit under test by the shaker system. The damage potential of shock pulses can be readily simulated using a classic shaker setup and have the advantage of being very repeatable.

– Quad Shakers
The Brüel & Kjær LDS Quad V984LS shaker system is capable of delivering 640 kN of sine force. For larger components, the quad shaker system combines individual shakers, in this case LDS V984LS shakers, delivering forces up to a staggering 640 kN of sine force (each shaker is capable of delivering a maximum sine force of 160 kN/36000 lbf). The four shakers are mounted on a seismic block and connected to a head expander level with the floor. This is used to test satellite solar arrays, large satellite communications antennas and complete satellites, from 400 kg up to 10,000 kg.

Quad vibration systems are used for a variety of tests. They can be used for large, light specimens doing sine and random tests at levels up to 20 g, or for complete satellites that are submitted to sine sweep testing at acceleration levels around 1 g, and quasistatic tests up to 12 g.

Environmental testing has long been known to provide a repeatable and controlled way of introducing a satellite to a testing regime that simulates real life, or to stress a satellite in a controlled manner. Vibration and shock can be measured in the real world and then reproduced using electrodynamic shaker systems under laboratory conditions. Testing combinations of temperature, pressure and mechanical stress can make or break a satellite prior to launch. This, of course, increases the cost of development in the short term, but more than pays for itself in the long term as the cost of fixing a problem prior to launch is much preferable than the alternative. 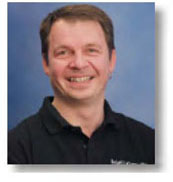