The global space industry appears to be going through a period of reinvention, as evidenced by a variety of changes in the way it conducts operations. 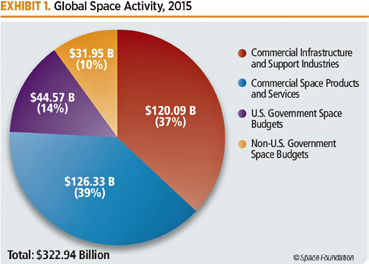 Large satellites are taking advantage of more efficient propulsion systems that may help increase their usable lifespan. These are but a few examples of how the industry is making space more affordable and consequently more accessible to a broad swath of public agencies, industries, and individuals.

The Flanders region of Belgium is using geo-fencing and communications to replace underground sensors on its tram networks. In other parts of the world where buildings do not always have an address, or road networks are confusing, smartphones with positioning, navigation, and timing (PNT) chips are facilitating delivery services for mail and packages. In war zones, drones equipped with PNT guidance systems are being used to supply refugees with life-saving supplies.

On the consumer side, there are space-enabled systems to assist with finding prime locations for sport fishing and to help coaches improve the performance of soccer players.

With the ongoing globalization of food production, space systems are helping the shipping industry better monitor the condition of food in transit across the ocean to ensure that freshness is maintained all the way to the grocery store.

The abundance of satellite imagery has led to increasing numbers of space data analysis companies that help people understand their surroundings, whether for business or recreational purposes. The global demand for space data and applications is driving many of the recent investments in space.

The Space Economy
The global space industry grew in 2015, although currency fluctuations caused the appearance of a decline from $329 billion in 2014 to $323 billion in 2015. Due to the strong US dollar and the ever-increasing levels of activity outside the United States, these fluctuations have a more noticeable impact than would have been the case in previous decades when the US share of the commercial space industry was larger.

In 2015, revenues from commercial sectors continued to represent slightly more than three-quarters of all global economic activity in space. Commercial space products and services—including telecommunications, broadcasting, and Earth observation—constituted the largest sector, growing by 3.7 percent to reach $126.33 billion in 2015.

Commercial infrastructure and support industries—including the manufacture of spacecraft, in-space platforms, and ground equipment, as well as launch services, independent research and development, and insurance—totaled $120.88 billion in 2015, a 5.2 percent decrease. The majority of this decline is attributable to global navigation satellite system (GNSS) receivers whose revenues are benchmarked in euros and were subject to the change in currency exchange rates.

Space Infrastructure
Governments and companies around the world continue to invest in new space infrastructure. At least 19 countries have, are developing, or are planning to host spaceports for orbital or suborbital launches.

In spite of several launch failures and delays due to subsequent investigations in Russia and the United States, 86 orbital launches were attempted around the world in 2015—the third highest number of launches in two decades. 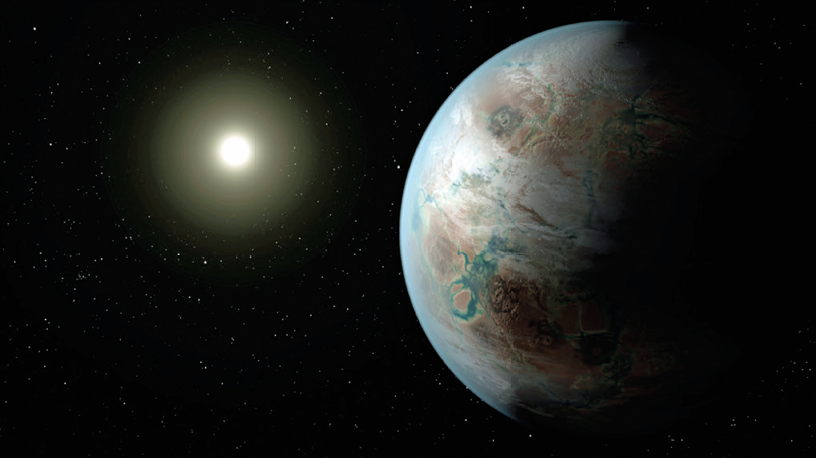 The United States saw the unsuccessful launch of a new small-satellite launch vehicle, the Super Strypi. In perhaps the most significant development for the launch industry, two US companies successfully landed rockets that returned from space. Blue Origin’s launch vehicle landed after a suborbital flight and subsequently flew to space and back on two occasions (as of May 2016). SpaceX returned the first stage of its Falcon 9 launch vehicle after an orbital launch, initially to a launch pad at Cape Canaveral. In later launches, the first stage landed on an oceangoing platform.

Although none of the returned hardware has yet been flown again, the company hopes to reduce its operational costs by reusing the rockets. Reusability has long been discussed as a way to lower the cost of launching payloads to space, but it remains to be seen how much of an impact these developments will have on pricing and reliability.

Even at current prices, the number of large spacecraft being sent to orbit each year remains steady, and interest in small satellites continues to grow unabated.

Despite their numbers, nanosatellites constituted less than 1 percent of the total mass sent to orbit in 2015. At the other end of the scale, telecommunications satellites launched to geosynchronous orbit made up 41 percent of the total mass, with an average mass of approximately 4,500 kilograms (9,920 pounds) per satellite. These satellites form the backbone for satellite communications and broadcasting services that generate more than $100 billion each year.

The Workforce
The space industry operates at the cutting edge and requires a highly skilled, highly trained workforce to build, launch, and utilize space assets. Trends in the size and composition of this workforce provide insight into ongoing dynamics and future health of the sector. 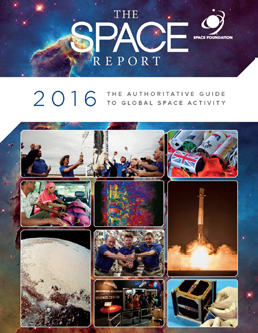 In 2014, the US civil and commercial space workforce remained one of the largest in the world, with 221,585 workers, but continued to contract, while employment in Europe and Japan grew.

In the United States, the outlook for industry is mixed, with growth projected for scientific disciplines such as astronomy, but declining demand for aerospace engineers. However, the ongoing process of integrating space technology into all aspects of life means that other jobs are being created that do not fall into the traditional aerospace categories.

Programmers, computer scientists, and “big data” wranglers are all likely to find increasing demand for their skills as companies seek to monetize the growing torrent of information flowing from and through space systems.

Since the first edition of The Space Report was published in 2006, the Space Foundation research team has gathered an everexpanding collection of information about the space industry, government policies and priorities, and the evolving trends that influence space activity. Each year, we present the highlights in The Space Report, focusing on the points that we believe are of greatest interest to a broad audience.

To further address our readers’ research needs, we introduced a new format in 2015—an online service that provides subscribers with access to all the research conducted for The Space Report throughout its existence, as well as new data sets that have never appeared in the report.

Space Foundation appreciates the positive response to this valuable resource, and the organization is expanding the types of data offered in response to requests from their readers. To view more information about this new service, please visit www.TheSpaceReport.org.