We call Tranche 0 our Warfighter Emerging Tranche because it allows people to start to develop their comm ops and their techniques and procedures to work with these kind of data.

Tranche 1 two years later, now we have hundreds of satellites in the Transport layer. We can actually start to get regional persistence for that tactical comm layer and we’ll move that data in and out of theater. 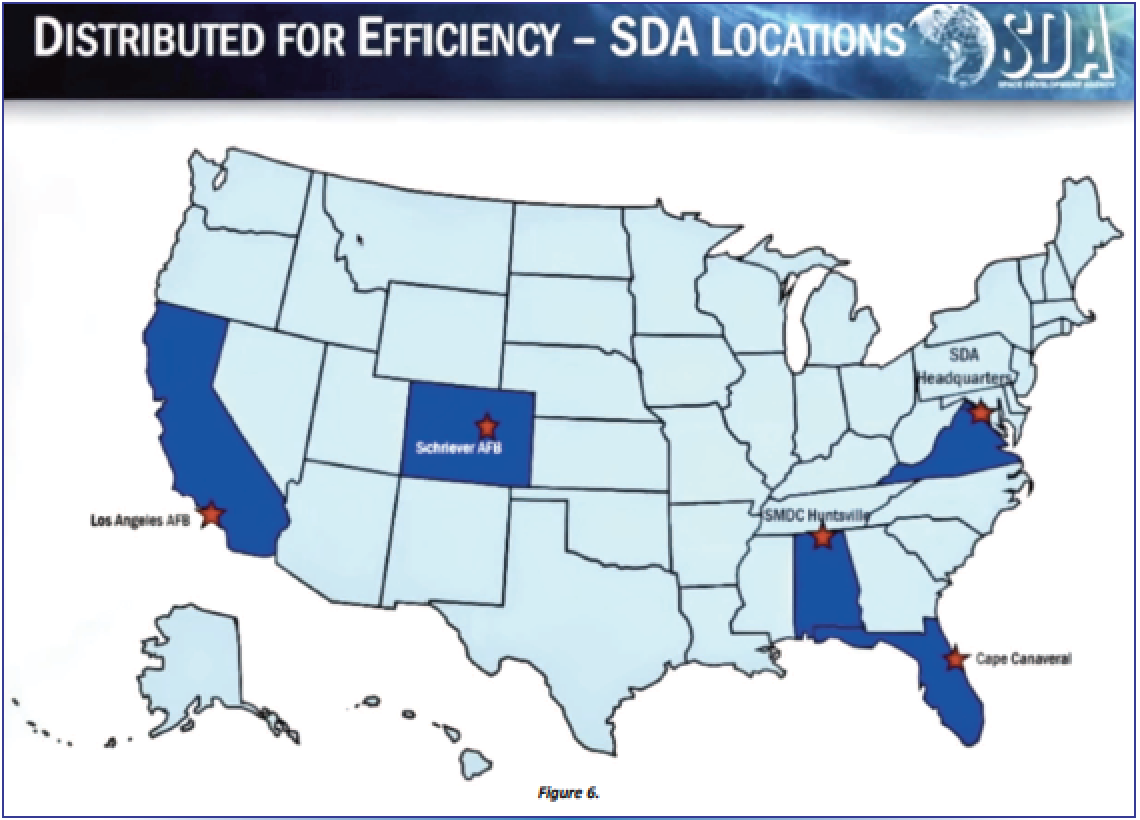 For Tracking, we’re working within the department to say exactly what would be funded as part of Tranche 1 for Tracking, but ideally, we would have on the order of 47 satellites that would give us enough capabilities for regional persistence to be able to detect advanced missile threats.

Tranche 0 is our immersion Tranche and is essentially the free product, if you will, that will get people hooked on what we’re selling. It will allow them to see the data, understand what proliferated LEO can provide for their situation and then allow them to start to develop their plans around access to those data. 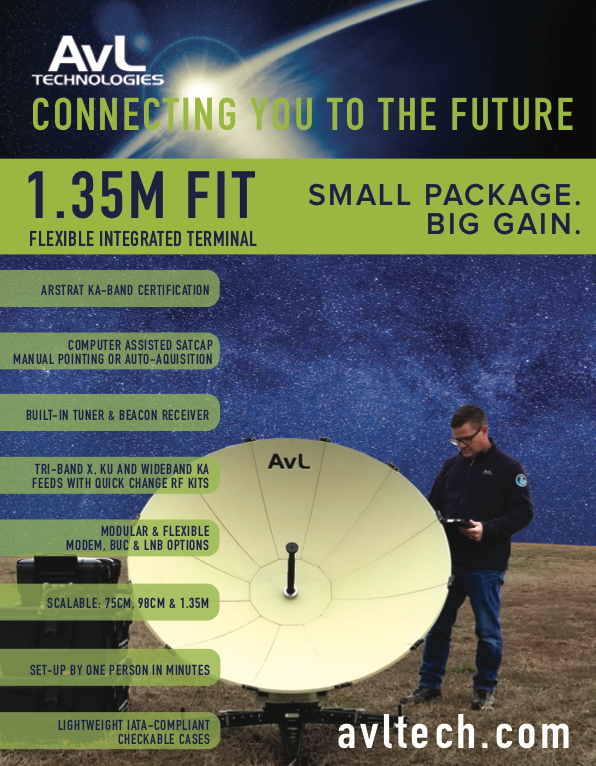 Tranche 2, hundreds more satellites, and now we have global persistence, not just regional persistence. That’s our final operating capability. In Tranche 3, that’s when we start to fold in lessons learned from Tranche 1. We start to pull in new technology that was developed along the way and then we can start to respond to new Tranches as they come online.

Tranche 4 and beyond, every two years, new technology gets fielded, more satellites get fielded, and we adjust based on threat and need. So, that’s how we operate.

How are we doing this execution-wise? One of the key things that we’ve learned over the year is that you can do quite well with distributed operations (See Figure 6).

Those are all of the locations where SDA has individuals that are working and operating, helping us to make this happen, so we’re distributed. Our next facility is going to open up some ground and mission operations center at in North Dakota. We have distributed operations to make sure we have access to talent where we need to and we can get to those missions in those locations (See Figure 7).

Figure 7 shows how busy we’ve been in the last year. It seems like not that long ago, when I was in person at the last smallsat conference talking about our plans for 2020, and I just want to highlight that we have been successful in hitting all of the milestones and achieving what we expected to achieve in 2020, even despite all of the challenges with COVID.

The key contracts (see Figure 8) that are critical to that Tranche 0 success. For Transport, we have 20 satellites, 10 on contract from Lockheed Martin and YORK Space Systems.

The Naval Research Laboratory is helping us with Ground. Missions Systems Engineering and Integration is done by Perspecta. They’re helping to make sure all of these pieces and parts come together, as we have multiple performers with multiple pieces.

Launch was the most recent contract awarded to SpaceX for two launches, one in September of 2022 and the second one no later than March of 2023.

And Tracking, we have two performers there, each delivering four satellites — L3Harris and SpaceX. As part of our mission team, MDA has two satellites and they have L3Harris and Northrop Grumman on their team. 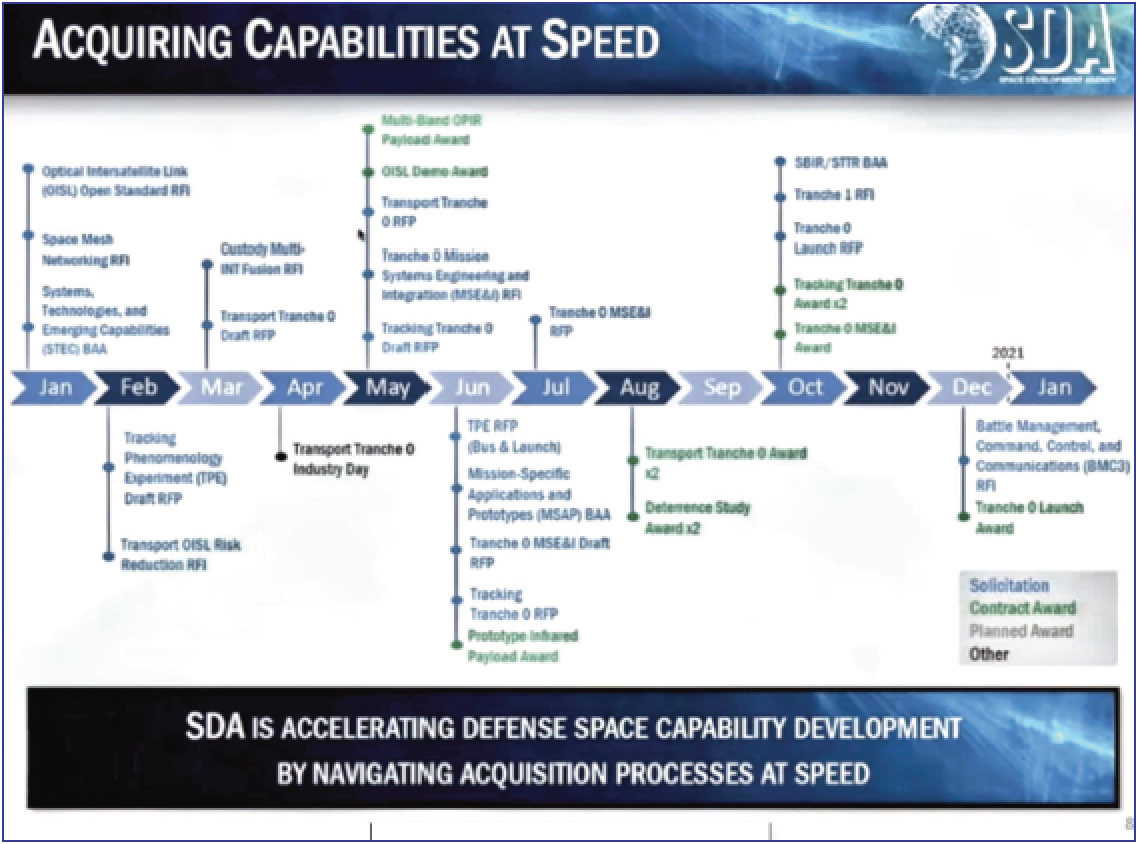 The SDA accomplishments — we did deliver two satellites, nine months after receiving our initial funding. Those two satellites are at the bottom of this graphic. This was our holiday card (see Figure 9 on the following page) — this was a joint mission between DARPA, AFRL and SDA to build these two satellites.

Now let’s talk about some about some of the big impacts we’ve had. I cannot overstate the profundity of the proliferation and final development of architecture. When this was first pitched, this whole concept, within the Pentagon, within the department, people looked at the capabilities that we were planning to be able to provide and they said, “Who are those satellites to be able to do that?” With that, we looked at their historical model.

The chart (see Figure 10) reveals the hundreds of millions of dollars per satellite. So, if you want to proliferate hundreds to thousands of these satellites, there’s no way that’s affordable. I contended at the time that, no, the price was going to be actually less than $20 million per satellite and, in fact, it was affordable and I was basing that off what I had seen in industry to that point and what the commercial providers were able to do. 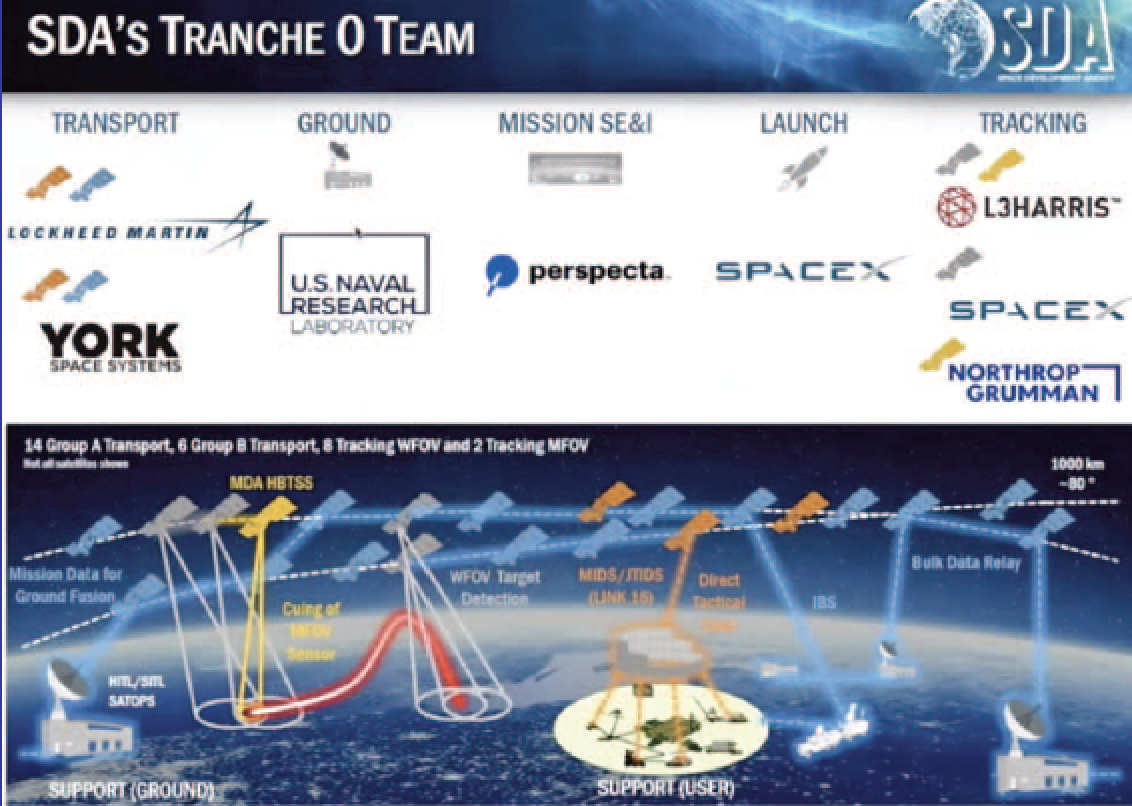 And as we push forward on cost one, the key thing there is now we’re talking about on the order of 150 satellites. So, we even need to push that down lower. I believe this is feasible, because we got a lot of responses back to our request for information (RFI) from industry saying, you know, if you’re buying into scale, we can push it down significantly lower than the cost in the current contracts.

We’re excited about that. And that really shows the power of proliferation and how we can be resilient against the threats and provide these capabilities in a timely manner.

This is what enabled the revolution for this kind of concept. And it’s not anything the government has done, it really what’s been driven by commercial enterprises, commercial innovation and commercial industry pushing the price down, only in the cost of these satellites, but the cost of launches has dropped significantly as well.

That is what is enabling these missions to succeed and that is key. I need industry to partner with me on that, to continue to come up with ways on how to drive that down, how to drive manufacturability up so we can continue to push proliferation and final development.

Some of the details as to how we are marching forward for our product release are shown in Figure 11. Tranche 0. As I mentioned, we have a few demos planned in 2021, so I’ll talk a little about those. 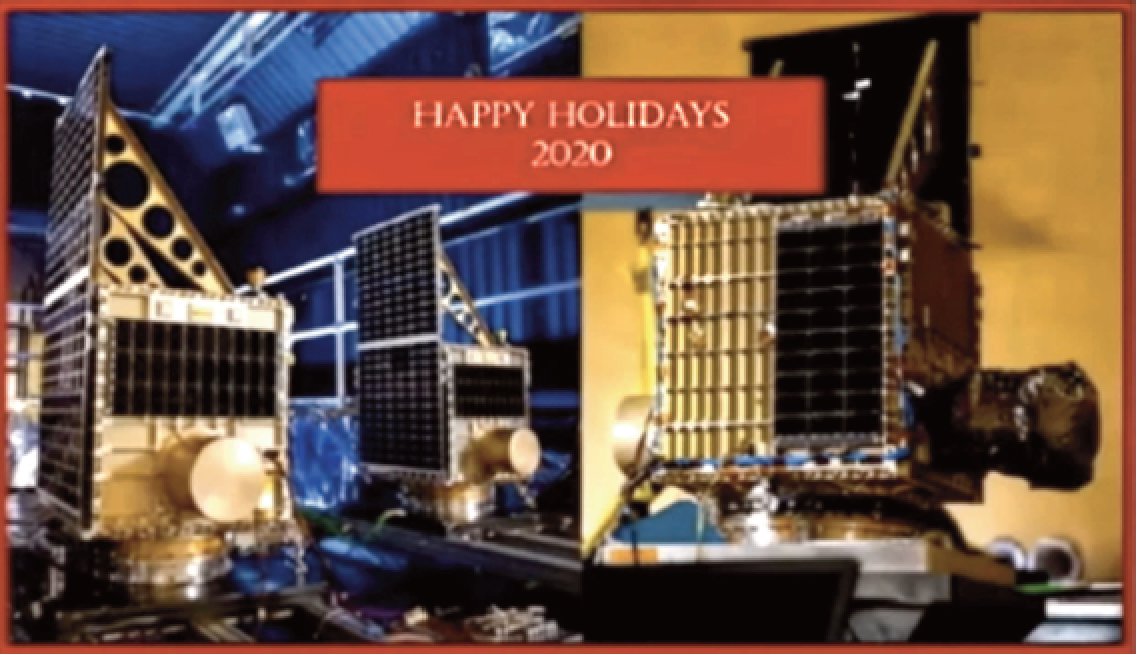 Obviously, Blackjack at the top, that’s a DARPA demo and they’ve got several different concepts. They’re going to fly two satellites later this year and then they’re going to culminate with more than that, somewhere on the order of a dozen up to 18 satellites in the 2022-2023 timeframe as the full DARPA Blackjack program.

PIRPL is a joint SDA – MDA program. The performer is Northrop Grumman and that is to fly a medium field of view, multi-spectral imager for OPIR (Overhead Persistent Infrared) to be able to demonstrate feasibility and use that for some of our models. That will be launched on NG-16 later this year. 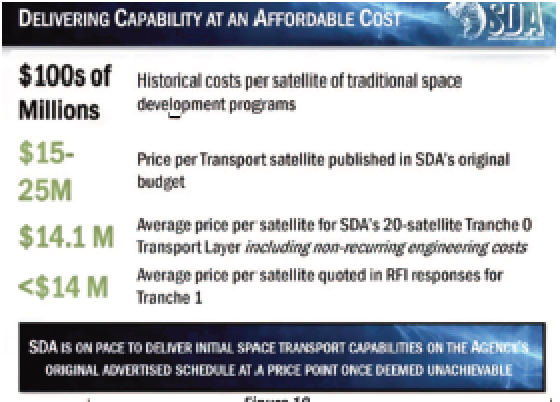 XVI, that is primarily an AFRL program that we are working with AFRL on because we are definitely a transition partner. That would demonstrate that you can go from space to a Link 16 tactical datalink network. That will be launched later this year.

The key thing, then, is in 2022, that’s when we launch our Tranche 0. That’s 20 Transport satellites, eight wide field of view OPIR satellites and two medium field of view HBTSS (Hypersonic and Ballistic Tracking Space Sensor) satellites being built and delivered by MDA.

Then Tranche 1 comes up in 2024 where we have on the order of 150 Transport satellites and, hopefully, depending on what happens within the funding debate in the department, on the order of 40 Tracking satellites.

Longer term plans and what can really be expected… we’re on track to Tranche 0, so that’s pushing forward. All we can do is hope for success there and continue to deliver and make sure we hit those milestones. Obviously the folks that are on contract are the ones that are responsible for making sure they execute. 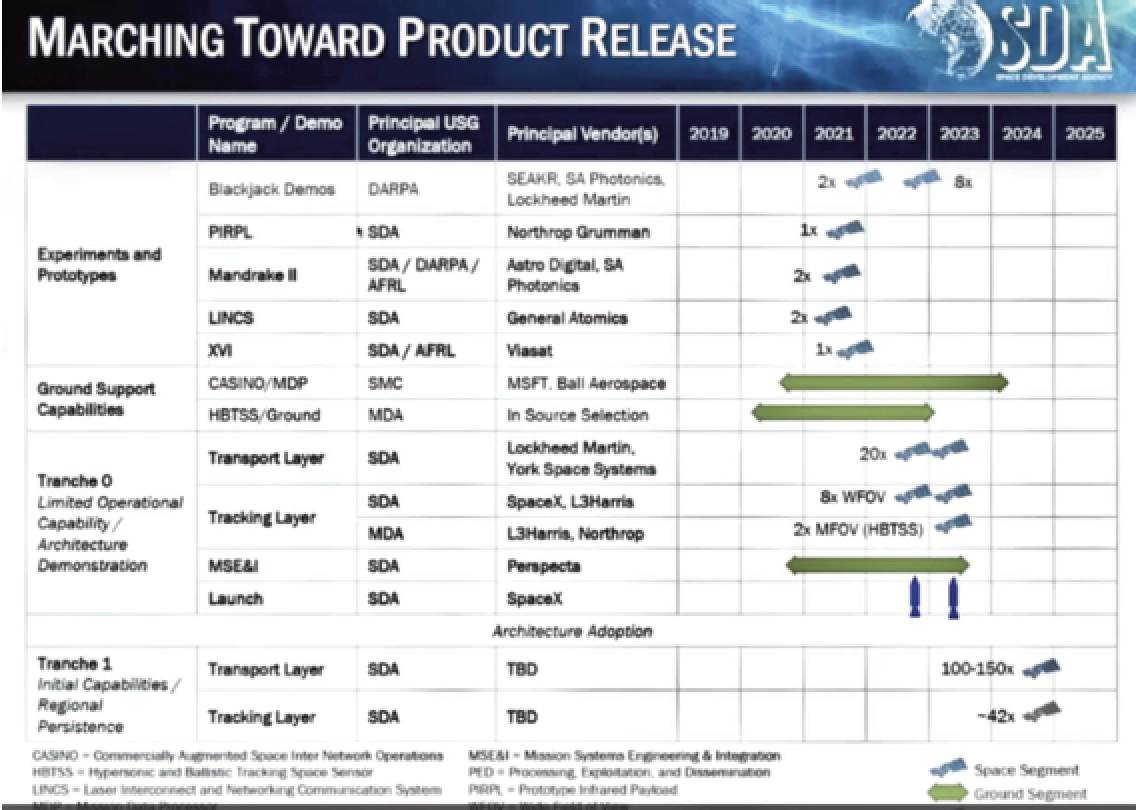 The key thing going forward is Tranche 1. Tranche 1 is going to be a big deal — 150’ish satellites for Transport. Pushing forward, the plan is to issue an RFP (Request for Proposal) this summer for that. We want to get those on contract by the end of this calendar year so that we can build and have all 150 satellites ready for launch for that September 2024 date. That’s what we’re pushing for.

We already have our Request for Information (RFI). We’ve received feedback from industry. We understand that and we’re pulling that in. We plan on coming out with a draft RFP in the summer. Shortly thereafter, after we get feedback from industry, we’ll come out with the real RFP and hope to continue to push forward. That’s what you should be watching for (See Figure 12 on the preceeding page).

But then, for Tranches 2 , 3, 4 and 5 on out, this is the product roadmap. If folks are looking at what we should be investing in, in industry, to make sure that we can come up with a product that we can sell to the Space Development Agency that they will include in their Tranches that is necessary for the warfighter, this is essentially the product roadmap that you could use for investment. 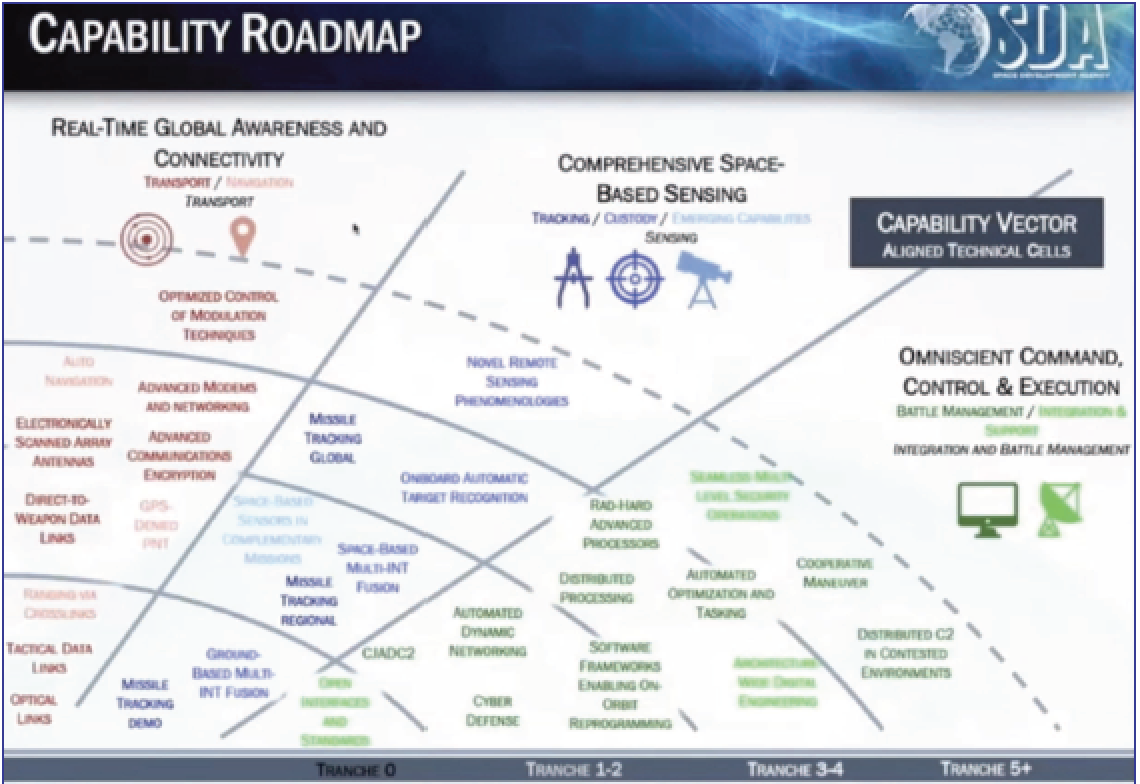 On the Transport side, the big key issues there are, how can we be ensure that we can have very small encryption devices that fit in the timescale and the SWaP seed that we need to do this proliferation. That’s a big deal. How can we continue to push differences in our Navigation, so that we can fuse data together, come up with a Nav message and get that off to the field. Those are key areas of investment. And we’ll be continuing to push on the optical crosslinks on that technology. Those are all key things along the Transport capability roadmap. 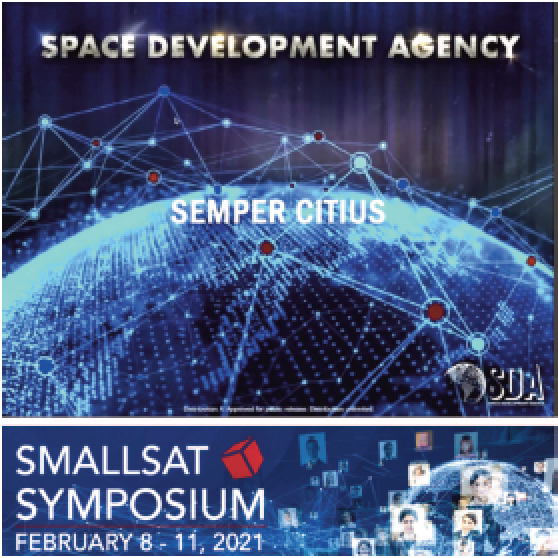 As far as the Sensing roadmap for Tracking and Custody, primarily there we are looking at are there other missions that folks are fielding — can we use those data to be able to synergistically come up with a solution where we fuse those together. That’s why the areas where we’re looking for investment and for folks to team with us, as well as any kind of autonomy.

This is our product roadmap. Please, review this and study it to see if there are ways you can help. We also have a broad area announcement on the street that kind of talks about investment that we’re willing to make to buy down some of our largest technical risks. If you have concepts there that can buy down those risks, send us an executive summary and we’d love to open up that conversation.

With that, we really appreciate your time and the opportunity to talk today about what Space Development Agency has done and our future plans and look forward to continuing to team with industry to make these a reality. Thank you.
www.sda.mil