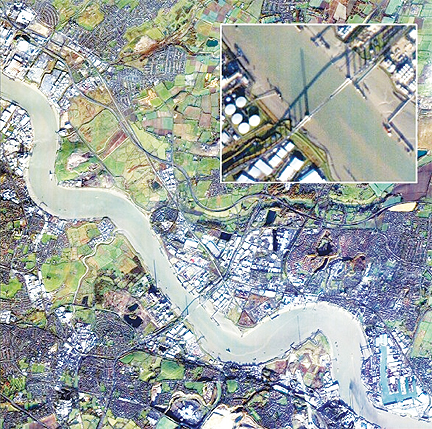 The government vertical has been a stable and growing market for commercial satellite service providers in recent years given the shortfall in internal assets civil and military agencies have at their disposal. In terms of resources to run mission-critical requirements, government entities have always been behind the curve for bandwidth and data resource deployment. Indeed, the commercial satellite industry has been a growing part of governments’ strategic planning for current and future requirements for a variety of applications. It is now safe to assume that over the long term, commercial capacity and offerings will be a permanent feature in government planning and procurement practices.

This has brought the prospect of hosted payloads as a serious alternative or option in addressing internal gaps. The idea of hosted payloads is not new and has been explored and implemented in the past mostly for experimental purposes. To date, there are less than 10 hosted payloads on commercial satellites for use by various government agencies around the globe. However, as the capability gap grows and as budgets and schedules tighten, discussions and contractual decisions are being undertaken currently to seriously plan for a more permanent and sustainable arrangement as the next generation of satellites for replacements and new programs begin to be built. 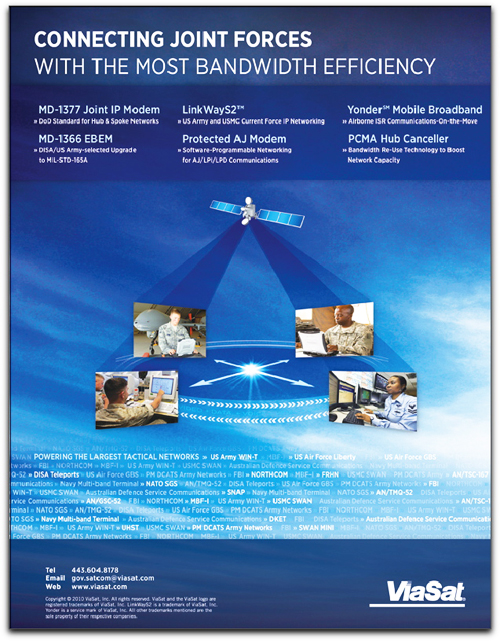 In examining and analyzing the case for hosted payloads for both military and civil government use in the areas of Communications Services and Earth Observation missions, the compelling benefits of speed, schedule and budget considerations assure the growing role of hosted payload arrangements over the long term. More importantly, application requirements that are at the core of the hosted payload offering provide government entities with a very attractive option by which to test, deploy and enhance their next-generation plans for a fraction of the time and money they have had to navigate in the past.

Dual-use programs for use by both commercial and government clients have been in existence for governments and international organizations such as Australia, the European Union, Japan, South Korea and the United States. In the global market for government and military demand, the United States has and continues to account for the vast majority of commercial leases and other satellite-related services. In the emerging area of hosted payloads, a major demand driver is likely to come from the U.S. Government once again. This will likely change the hosted payload market in terms of its place in the overall value chain within the industry. More importantly, the growing role of the United States should likewise lead to changes in the entire process of how commercial satellites are to be built and how military and civil government programs will be planned.

Primary Research Findings
In terms of the future evolution of the commercial industry as well as the adjustments satellite manufacturers may have to undertake in order to tap this potentially lucrative market, these are already underway. The investment and engineering aspects appear to be minimal relative to the revenue potential.

Governments and military forces have and continue to depend on the commercial satellite sector when looking at solutions. Going forward, NSR expects to see more hosted payload deals taking place. Hosted payload solutions bridge two seemingly disparate propositions in a single offering: a) launching a proprietary satellite that is highly expensive with b) completely outsourcing services or bandwidth needs to commercial providers.

Alternatives such as launching smaller satellites have been put forward, but that option may still be much more expensive compared to hosted payload arrangements.

Over the next 12 months, the hosted payload environment should develop at a much faster pace compared to the past 2-3 years when hosted payloads came to the fore (See Figure 1). This does not mean the marketplace will see many announcements over the next 12 months. Rather, more discussions, negotiations, and various parties coming together to work out deals will take place. 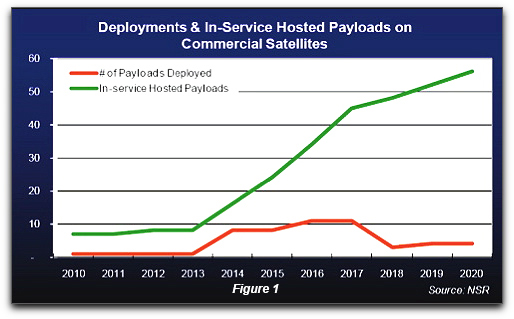 Currently, there are less than 10 hosted payloads on commercial satellites and the form by which these have materialized have not yet been ironed out. Compared to current commercial arrangements, for instance, there is still no “templated” contractual formula (so to speak), such as signing a lease or a spot market purchase in drafting hosted payload contracts.

There are also more parties at the table working out deals (including the operator, the manufacturer, and the government client) that enter discussions with different sets of agendas, concerns, and constituencies who may raise various issues regarding hosted payloads for their own reasons. A satellite operator, for example, may have a long-term video client who may appreciate having a hosted payload on the satellite carrying his long-term transponder leases due to the risks associated with that payload.

Yet, the impetus to engage in hosted payloads is a far more serious issue today when compared to the past few years. The contractual scheme is slightly more complicated. Contracts will require more time to close. Due diligence is required on the technical, financial, regulatory, and various other aspects to ensure hosted payload arrangements work smoothly for all parties concerned.

Deployments & In-Service Hosted Payloads On Commercial Satellites
Input from various players interviewed for this study leads NSR to foresee a growing hosted payload market over the next 10 years.

However, apart from growth in hosted payload units being deployed and the number of in-service hosted payloads serving various government agencies (see Figure 2), trends in the engineering costs and the expense of the hosted payloads themselves will be difficult to determine. 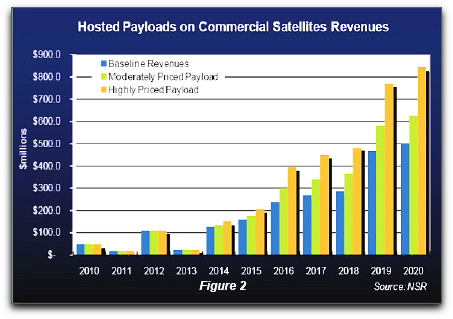 The only reliable trend is that there will be more hosted payloads in the future. This is a game changer and a potentially new way to creatively launch capabilities into space. Other trends continue to evolve. These include where, exactly, demand lies in terms of drivers and payload types whether expensive, simple, or complex. Moreover, engineering methods and costs are all open-ended and cannot be predicted.

GEO satellites that have a range of bus size, fuel capacity and other attributes able to support more complex payloads, provide a wide range of payload complexity and this means cost structures will impact revenue streams.

Revenues that are driven by the cost of hosted payloads can only be contextualized on a scenario basis. NSR offers a Baseline, Moderate Price Payload and High Price Payload scenarios to provide a range of potential revenue streams in the hosted payload market. An important caveat — the number of scenarios presented are just three out of a possible dozen or more scenarios where different payload types are developed, integrated, launched and operated.

What It All Means
The bottom line is the market is likely to see more cooperative agreements undertaken between the commercial satellite industry and governments where hosted payloads provide a compelling vehicle by which a mutually beneficial partnership scheme ensures a long term and perhaps permanent proposition.