If you’re unfamiliar with communications analysis, 3 dB (short for decibels) is probably meaningless. Those designing and relying upon communication systems, however, understand that 3 dB is a factor of two that, in terms of communications performance, can mean the difference between mission success and failure.

Net-centric warfare, information dominance, and spectrum management challenges have increased the complexity and importance of designing and operating communications systems. Analytical Graphics, Inc. (AGI), a producer of commercially available desktop software and development tools for space, defense, and intelligence professionals, supports these needs with two unique benefits: accurate representation of operational communications performance and illustration of how that performance affects the mission. 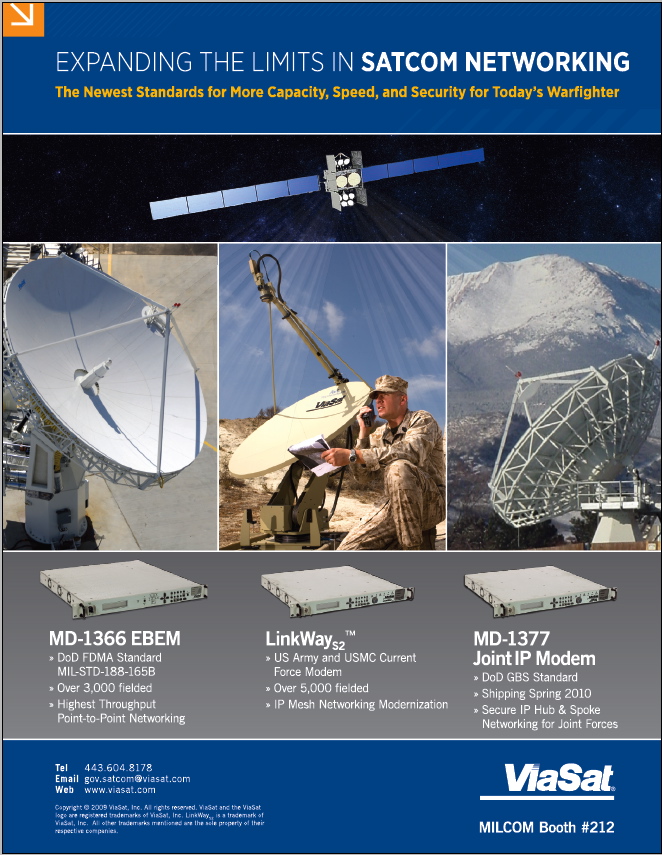 In contrast, AGI’s communications modeling uses physics and mathematical models to represent these attributes to provide better prediction of operational performance. For example, when planning a field test of an air-to-ground radio link, the outcome can be significantly impacted by seemingly simple decisions such as where to locate the antenna on the aircraft, how to fly the aircraft, where to conduct the test, and where within terrain to locate the ground antenna. AGI software can accurately considers these and other factors to better plan the test and ensure test objectives are met without wasting range time and other expensive resources in the field.

RT Logic, a wholly owned subsidiary of Integral Systems, Inc. and a leading provider of ground system components and test instruments, uses this accuracy to provide its clients improved communications link testing capability. “We’ve integrated AGI’s communication systems modeling into our test instrumentation package so tests can be conducted in the laboratory, significantly reducing test cost and risk while dramatically improving test depth to include scenarios that would be impossible, dangerous and/or expensive to conduct in nature,” says RT Logic Business Manager Steve Williams.

This same AGI fidelity that is helping RT Logic transform test operations is also letting communication system designers and operators be more productive and confident in their work. 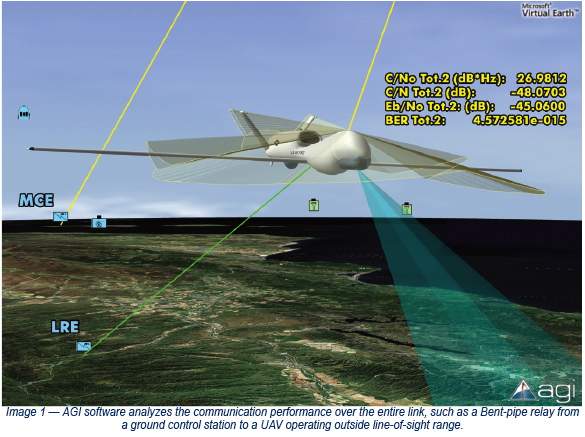 It’s All About the Mission
The value of high-fidelity operational performance predictions cannot be overemphasized, but assessing communications performance in isolation can adversely influence system architecture design and overall mission satisfaction. For example, when designing the communications link for an unmanned aircraft system (UAS) that will return live video to field commanders, it would be a mistake to do so without an understanding of how the aircraft, optical sensor and communications combine to deliver surveillance coverage. Examining the communications link in isolation could lead to unnecessarily constraining the aircraft to higher altitudes, necessitating a heavier, higher-resolution camera that reduces mission duration and increases system cost. Similarly, decomposing the problem across individual disciplines can slow the systems engineering process and inhibit design innovation discovered through integrated analysis.

With AGI software, it is possible to avoid such suboptimal mission architectures and engineering inefficiencies by modeling the aircraft, optical sensor and communications link as a system and directly measuring resulting mission-level performance. This facilitates rapid trade studies that could indicate a lower operating altitude is possible and a small increase in power budget for the communications link could dramatically increases surveillance coverage. 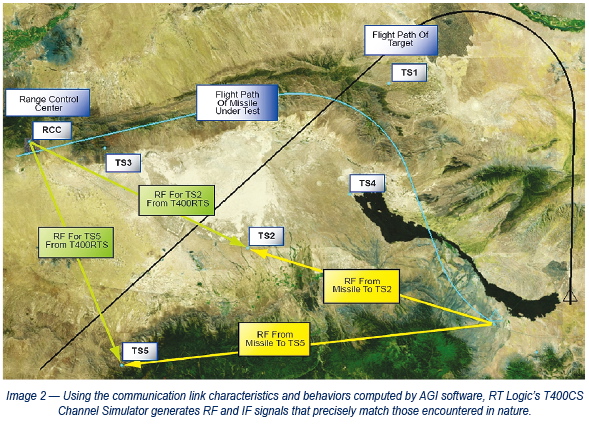 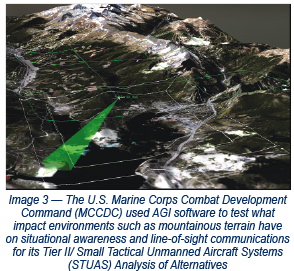 “It would have been futile for me to produce analyses that only included the sensors in an operational context without factoring in the communications sub-systems. There is a huge correlation between the two, and STK gives us this specific capability,” says Lt. Colonel Brian Zacherl, MCCDC.

Using AGI technology, MCCDC tested what impact environments such as mountainous terrain have on situational awareness and line-of-sight communications. AGI software provided integrated sensor and platform analysis and modeling capabilities for the trials including the incorporation of high-fidelity terrain; sensor coverage; communications and line-of-sight analysis; and high-level sensor modeling. “AGI software shows us the tradeoffs and that is why we keep working with it,” Zacherl says.

Tier II/STUAS was approved by the Joint Staff in September 2008, with AGI products serving as the primary software used to develop and analyze this new UAS concept. In addition to guiding this important acquisition, the AGI-based ISR mission analysis tool is now in use to support combat operations in Afghanistan.

Right Answers. Right Now.
Accurately representing operational performance and putting that performance in the context of the overall mission is what sets AGI communications modeling apart from alternatives. These capabilities are available as desktop applications, an application engine and as low-level software components suitable for service oriented architectures — all with flexible pricing and licensing options. 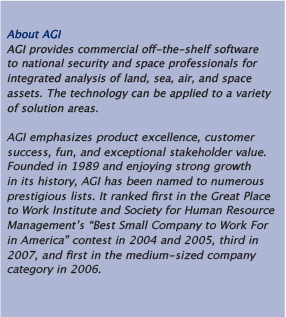