Ensuring definitive strategic advantages against adversaries is a continual military challenge, especially in rapidly changing environments. Today, many of the platforms and applications that give the warfighter an edge are network-enabled.

As military operations and platforms continue to grow increasingly dependent on IT systems and applications, it is essential that warfighters remain connected. That can be a problem in theater, where terrestrial networks often do not exist, can be compromised, or are simply untrusted.

To address some of the challenges of keeping troops ubiquitously connected, the military has traditionally turned to satellites to deliver communications and connectivity to deployed warfighters. But the size and weight of ground infrastructure and terminals — and challenges caused by limited throughputs and high latency — have often kept satellites from providing connectivity and communications. This is especially true for warfighters that are on the move.

Soldiers need mobility. They also could benefit from network-enabled capabilities on the move. However, they do not need the increased weight of large, heavy satellite terminals, and antennas, nor their large power requirements. This is a problem because there are critical advantages of an empowered soldier with access to advanced mission command capabilities across all warfighting functions, near real-time decisiveness, and the ability to mature capabilities in theater.

When soldiers are away from the forward operating base, it would be incredibly useful for them to have the same access to applications and IT capabilities that they have on base. Situational awareness applications in the hands of our warfighters is critical. Access to cloud data and services, geo intelligence, full communications, including voice, text, and video represent key advantages that will be available to keep warfighters connected and informed.

Thankfully, new satellite hardware — including flat panel, Electronically Steerable Array (ESA), and phased array antennas — is entering the marketplace that is reducing the size and weight of satellite ground infrastructure and hardware. Unfortunately, these flat panel, ESA and phased array antennas are not as effective as traditional parabolic antennas.

However, stronger, more concentrated beams are helping to counter that problem. Major satellite advancements could lead to high bandwidth communications being available to warfighters on the move. One of these new advancements involves the construction and launch of a new generation of satellite that is capable of delivering massive throughputs from the Medium Earth Orbit (MEO). This new satellite service, O3b mPOWER, is slated to be available early in 2022, and will be launched and operated by satellite communications provider SES.

The sheer power of these satellites makes it possible to address one of the largest stumbling-blocks to using satellite for Comms-On-The Move (COTM) in the past — the size of the antenna and ground hardware. With such a powerful satellite, it is now possible to employ smaller, flat panel, phased array antennas that track satellites through the sky. This means that the size and weight of satellite hardware is no longer a limiting factor. Such advancements, and the use of O3b MEO and 03b mPOWER, will allow the military to bring to bear empowered, informed, and nimble warfighters and maintain a significant advantage in combat theater. 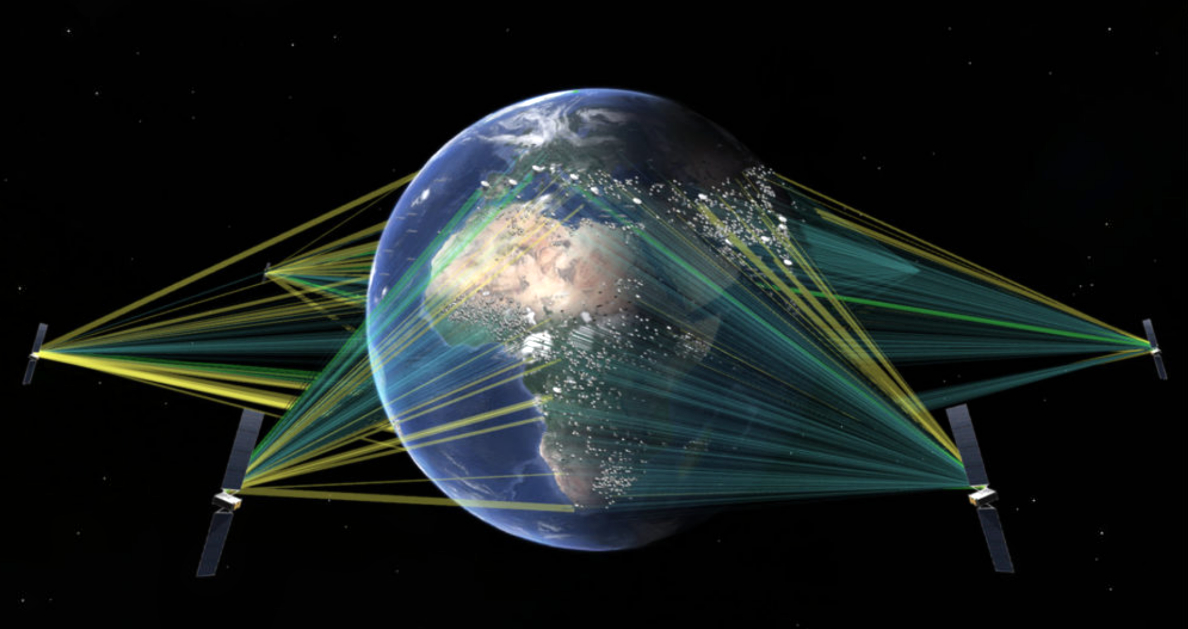 Artistic rendition of the SES MEO constellation. Image is courtesy of SES.

O3b mPOWER also employs digital beams that are customizable and steerable. This gives customers the ability to determine the size of the pipe based on present requirements. Coupled with the reduced latency, this allows for all “at-home” technologies to be employed for expeditionary and mobile communications.

Today’s warfighter is facing a new generation of near-peer adversary. To gain and keep a tactical edge over these adversaries, the DoD is moving towards a hyper-enabled warfighter that relied on network-enabled platforms and capabilities.

Satellite is essential for delivering the necessary connectivity for these systems, but that has traditionally come with limitations that hampered the ability to truly embrace comms on the move. Thanks to O3b mPOWER and a new generation of ground hardware, those limitations are being erased and true, high throughput comms on the move are about to become possible.
ses-gs.com

For additional information about O3b mPOWER and what it can do for the military, select this direct link..

This article first appeared on GovSat and is republished with permission.

Author Robert Rigsby is the Senior Director COCOMs and Integrated Development with SES-GS.