Location of military equipment in the field is an essential requirement for the ‘warfighter’. In The Brick Moon, a book published in 1873, E.E. Hale, the author, described four 600m diameter satellites which were in polar orbits of about 6500 km altitude. Two of the satellites passed regularly over Greenwich in the United Kingdom, while the other passed regularly over New Orleans, USA. The purpose of these satellites, which were apparently manned, was to be used by navigators to determine longitude.

Today unmanned satellites, substantially smaller that those suggested by E.E. Hale, provide navigators with such a facility.

Navigation is the technique of determining one’s position through the intersection of two or more lines from reference points of which the positions are already known. To assist in this, the globe is divided in latitudes, which are reference lines running parallel to the equator, and longitudes, which run from the North to the South pole. Latitudes are up to 90° north and south of the equator and longitudes are 180° east and west of the 0° longitude which runs through Greenwich (U.K.).

Latitude can be measured either from the angle of the Pole Star above the horizon or by the angle of the noon-day Sun in relation to the navigator's position. Longitude determination makes use of the fact that the Earth rotates on its axis once every 24 hours, i.e. in one hour 15° of longitude passes beneath the Sun.

Navigational satellites are essentially radio transmitters of which the orbital positions are known. Through analysing the signals from three satellites, a navigator is not only able to determine his longitude and latitude but also, where appropriate, his altitude.

Transit/NNSS Series
The early navigational satellites of the United States were of an experimental nature. They were sponsored by the U.S. Navy and were built by RCA.
The early Transit satellites used a radio-Doppler navigation method in which the ship’s position was calculated from the observed change in the received frequency of the satellite radio transmission as the satellite passes across the sky.

This technique is based on the principle that the orbit of a satellite can be accurately computed by the analysis of the Doppler shift of the radio transmissions by the satellites.

This shift is like the changing frequency, or pitch, of the a train’s whistle as it approaches and passes a listener. As the train approaches, the sound waves pile up in the direction of the listener. They stretch out from the listener’s stand point as the train speeds away and an apparent change in frequency occurs. In a similar manner, the frequency of radiowaves reaching the ground from a moving satellite undergoes an apparent change, although the satellite continues to transmit on the same frequency.

The accuracy is limited by the frequency stability of the satellite transmissions and the ability to predict the satellite’s orbit between the time it is measured by a ground tracking station and the time the user observed the satellite.

Another method is based on time ranging. Here the user calculates his distance from a satellite by a measurement of the time that the radio signal of the satellite takes to cover the distance to the receiver. To achieve a reasonable accuracy, this method requires three separate satellites are needed and a very accurate clock. 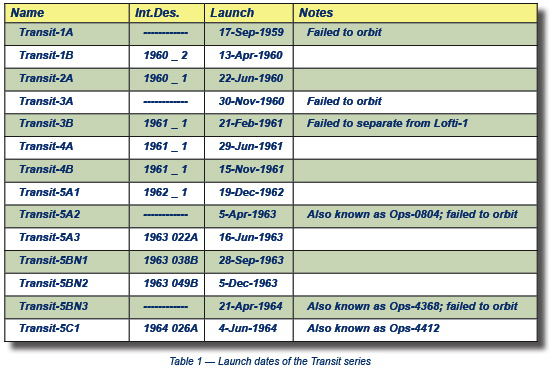 The Transit-1A and -2 series carried two ultrastable oscillators, an electronic clock, and four frequency transmitters which operated in the 162/216 MHz and 53/324 MHz bands. Transit-3 carried, in addition, a small magnetic memory. The Transit-4 series, which was of a different design, was unique in that they carried a Supplementary Nuclear Power (SNAP) source to generate the satellite’s power requirements. Transmitters operated at 150/400 MHz.

The Transit-5 series satellites were of an octagonal shape and carried dual frequency transmitters as well as a 30 m gravity gradient stabilisation boom. The 5A sub-series were powered by solar cells whilst the 5B sub-series carried a SNAP-9A nuclear power source. The 5C sub-series reverted again to solar cells.

The Navy Navigational Satellite System (NNSS), also called Oscar or Transit, was the first operational system based on satellites built by RCA. The principal objective was to provide positioning facilities with an accuracy of 150m to submarines carrying Polaris missiles. At a later stage the system was also made available to civilian users. The satellites transmitted at 150 MHz and 400 MHz. While six satellites provided useful coverage, additional satellites were launched as in-orbit spares. The satellites launched in the 1985/88 period are sometimes referred to as Stacked Oscar On Scout (SOOS). See Table 2 for launch specifics.

Timation/NTS series
The Timation or Navigation Technology Satellites (NTS) series tested new equipment to be used in the Global Positioning System (GPS). Timation-1 carried two high-precision quartz clocks for accurate measurements based on a three dimensional navigation technique. Timation-2 carried improved equipment and a dual frequency transmitter operating at 150/400 MHz. In addition, Timation-3 (or NTS-1) carried two rubidium vapor atomic clocks and operated at the 335 MHz and 1580 MHz frequencies, while NTS-2 tested a ceasium clock. The satellite also carried an experimental solar array. NTS-3, which was not launched, was to carry a hydrogen-masar clock. 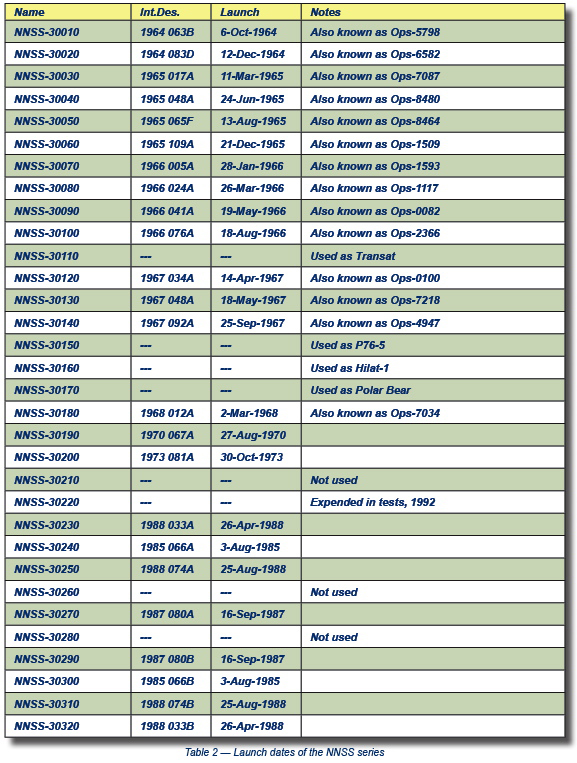 TIP Series
The satellites in the Transit Improvement Program (TIP) were considered as a precursor to the Nova series and incorporated the Disturbance Compensating System (Discos), hence, Transit Improved And Discos (Triad), which was designed to maintain position in orbit by correcting disturbances caused by solar wind and atmospheric resistance. In addition TIP-1 carried a radio-isotope thermal generator. The satellites in this series were built by RCA, as was the Transat satellite, which was launched on 28 October 1977 and tested the Satrack experimental system. 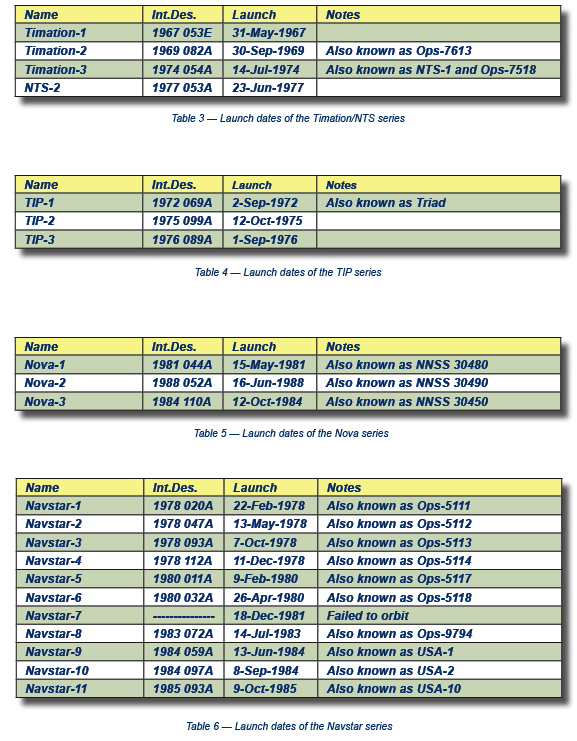 Nova series
The Nova system was purely military and was a development of the Tip series. The satellites were built by RCA.

Navstar Series
The Navstar or Global Positioning System (GPS) was the navigational satellite system developed by Rockwell for the US Navy. Although primarily a military system, and originally known as Program 621B, its facilities were also available to civilian users. Four satellites fixed the three-dimensional position of an object with a margin or error of 30m. This accuracy could be improved to 5m with the use of 18 satellites.

The Navstar satellites were equipped with three rubidium clocks and one caesium clock and transmit at 1575.42 MHz for civilian users and at 1227.6 MHz for military users. 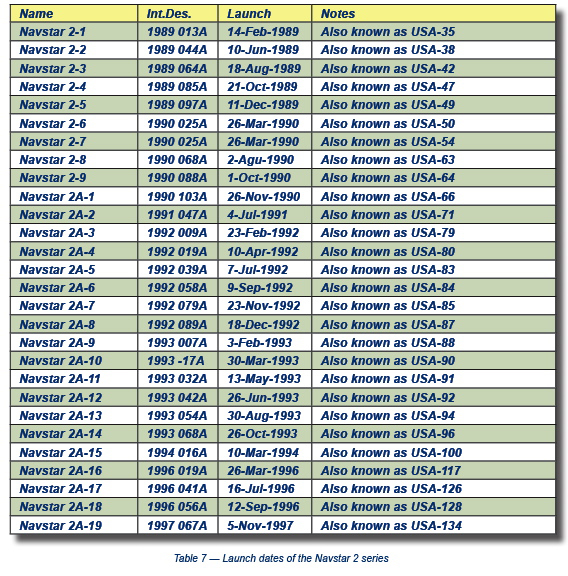 Navstar 2
The current operational Navstar 2 system consists of 21 satellites. While the system is in the first instance a military system but the facilities will also be available to civilian users. 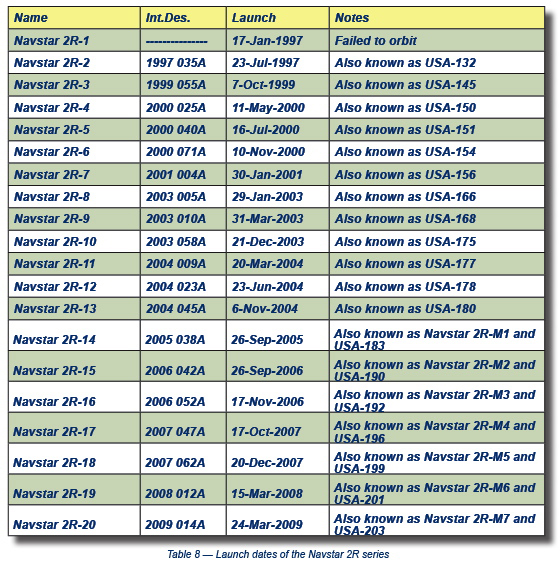 The satellites carry an atomic clock with an accuracy of 1 second in every 300,000 years. The complete system, which includes three in-orbit spares, will provide a positioning accuracy of 16m. 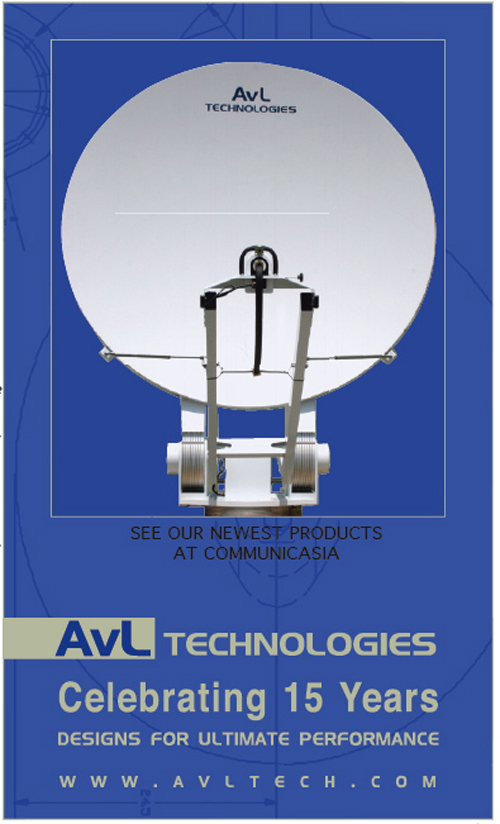 Navstar Constellation
The numbering of the Navstar satellites is confusing, to say the least. While in this article a straight chronological launch sequence numbering has been used, the satellites, being military, also received a USA numbering, in a multi-disciplinary series of military satellites. In addition, the satellites are identified by their pseudo-random (PRN) number or space vehicle identity (SV ID) number, which are based on the orbit arrangement of the on-line transmitting satellites.

The Navstar 1, Navstar 2 and Navstar 2A series were built by Rockwell (now Boeing), while the Navstar 2R series was built by Lockheed.

Jos Heyman is the Managing Director of Tiros Space Information, a Western Australian consultancy specializing in the dissemination of information on the scientific exploration and commercial application of space for use by educational as well as commercial organisations. Jos is the editor of the TSI News Bulletin and is also a regular contributor to the British Interplanetary Society’s Spaceflight journal.