I recently had the opportunity to attend a breakfast event hosted by C4ISR and sponsored by SES Government Solutions entitled, “Assured Communications 2016.”

The morning conference brought together senior military decision-makers—such as Winston Beauchamp, the Deputy Undersecretary of the Air Force for Space, Dr. Jeremy Palmer, the Project Manager for DARPA’s Tactical Technology Office, and Eron J. Miller, the Chief of DISA’s SATCOM Division and Peter F. Hoene, President and CEO of SES Government Solutions—together with industry experts to discuss challenges confronting our military in space. The forum provided everyone another opportunity to discuss ways that our military and private industry can work together to overcome those challenges.

The event kicked off with a keynote address by Mr. Beauchamp who began his remarks by detailing the increasingly contested environment that the US faces in space, as well as the sheer importance and pervasiveness that space capabilities have in our war fighting and military operations.

According to Mr. Beauchamp, “Not a plane flies, not a ship sails, not a vehicle moves out without space—whether it’s for communications or if it’s for position and navigation, or with the fore-knowledge brought to us by ISR from air and space. It’s key to every part of military operations.” 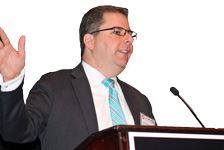 Unfortunately, our adversaries have noticed our reliance on space—and have acted accordingly. Countries have put a lot of effort and resources towards replicating US space technologies and capabilities for themselves. Scarier yet, those same countries are actively working to deny our military advantage by negatively impacting our spacecraft and satellite communications.

Mr. Beauchamp illustrated this shift in space when he said, “The decisive advantage that space brings to military operations has been the deciding factor in every military operation conducted to protect our interests around the world—or protect our allies when they’re in need. There are those around the world that have realized how we use space in our military operations and have taken steps to develop capabilities that would both replicate the significant advantages that space brings to the US and its allies, as well as potentially deny those advantages to us as well.”

This increasingly contested environment is new to our nation’s military and requires a new approach to the way the federal government has traditionally approached satellites and space. According to Mr. Beauchamp, “We’ve largely designed and built our systems for efficiency…in an environment where technology is expensive and launch costs tend to dominate. The result is…over the past few decades we’ve aggregated more and more functionality on larger and larger systems. If we’re going to have to launch it anywhere, might as well put more capabilities on it.”

That approach worked for the uncontested space environment of the past. After all, what was possibly going to happen to these large, high capacity satellites? Threats were relatively easy to define.

However, today’s contested space environment presents a different challenge and requires a much different approach. As a result, the Department of Defense (DoD) is actively assessing how they should address future satellite architecture needs.

As Mr. Beauchamp stated, “We have operated for many years under the premise that space was a free good for all and that access to space is an important priority. As others develop the means to deny US space capabilities, we have to start thinking differently about how we design and develop these systems and cooperate with industry to exist and survive the potential contested environment.”

How do we think differently in these areas? First, we shift the focus away from aggregating all military space communications and capabilities onto as few satellites as possible for the sake of efficiency and, instead, focus on resiliency. This means proliferation of satellite capabilities over many more satellites that are harder to identify and target.

When discussing the potential for kinetic and jamming incidents, Mr. Beauchamp said, “…in that environment, I’d like to be able to proliferate capability and spread out my requirements over multiple nodes. I’d rather be a five percent owner in 100 satellites than a 100 percent owner of five satellites.”

Leveraging commercially hosted payloads and the wide array of global SATCOM capacity, the military can effectively distribute their satellite capabilities over a wider number of satellites instead of concentrating these capabilities onto a few satellites, thus complicating a potential adversaries targeting calculus.

Another solution that the SATCOM industry brings to the contested environment is a new satellite technology that many satellite providers are either in the process of launching, or will soon be launching—High Throughput Satellites (HTS). These next-generation satellites either eschew wide beams entirely for smaller, spot beam, or offer a combination of both types of beams.

The smaller spot beams, along with digital technologies, provides baked-in, anti-jamming capabilities that can help ensure communications even in the face of sophisticated jamming attempts. These spot beams are smaller, making it more difficult to jam from inside the beam.

Multiple beams can also be steered to create an area of connectivity around a malicious actor who is working to jam communications. These abilities, coupled with the increased throughput, make HTS another viable commercial option that could increase the security and resiliency of the DoD’s space efforts. 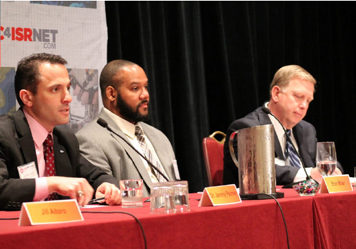 Mr. Beauchamp elaborated on the potential for jamming and how HTS can help when he said, “In DoD, interference is called jamming, and adversaries have become very good at it. We’ve seen a couple of events just recently where folks that had previously kept those jamming capabilities under wraps have unveiled them to make a point. And it’s widely understood that many potential conflicts in the future…[that] the United States and its allies will face a contested jamming environment. So, we want to make use of the commercial capabilities to use small beams, digitally form those beams and potentially use multiple beams to null out sources of jamming.”

It’s quite clear that space is no longer a benign environment. It’s also clear that Mr. Beauchamp is actively looking to leverage the commercial industry in a way that harmonizes the best available commercial and military satellite technologies for our warfighters.

During the panel discussion, Mr. Miller and Dr. Palmer laid out their organization’s current work and mission as such pertains to space and also spoke to some of the exciting ways in which the military is evolving and changing its acquisition process.

Traditionally, the DoD has leased—primarily via DISA—transponder bandwidth from large SATCOM providers as the way to meet its satellite communication needs in theater. Importantly, DoD continues to lease significant amounts of bandwidth to help support military operations around the world.

According to Mr. Miller, “Historically, we’ve leased between seven to ten gigahertz worth of bandwidth per year to support the [Department of Defense]. We had steady growth from 2001 to the high water mark of 2011. And we’ve had a slight tail-off but it’s been holding steady between six and six and a half gigahertz of capacity per year.”

This year-to-year leasing of capacity is not the most effective or efficient way to purchase SATCOM services. As has been discussed in previous articles, leasing this way comes at a premium, as the SATCOM operators effectively have to reserve that bandwidth for government use, whether it’s utilized or not. This model is short-sighted and doesn’t allow the military to realize efficiencies of scale that would come with longer term leases.

Fortunately, these inefficiencies haven’t gone unnoticed by DoD leadership, including DISA’s Mr. Miller as well as supporting Congressional oversight committees that acquire and provide oversight of SATCOM services for the military. A new path forward must be identified.

DISA, in concert with DoD, is exploring what those paths forward might be through the use of SATCOM Pathfinder programs, which are effectively allowing the military to pilot innovative acquisition and management strategies for COMSATCOM services.

Although they may seem like an unnecessary step—especially with an analysis of alternatives (AoA) rapidly approaching in the near future—these Pathfinder programs are essential at a time of significant change in the industry. The industry is increasingly moving toward managed services as a way to deliver SATCOM to customers, and new technologies—including HTS—are being adopted that are drastically changing the way SATCOM is delivered. This change is forcing the military to reconsider how it was traditionally doing business.

As the SATCOM Pathfinders and the AoA continues, the satellite industry has one request—a seat at the table.

According to Pete Hoene of SES GS, “I would like to see more industry-government interaction, quite simply. I’d like Eron’s team to interact more with the owner-operators. I’d like Jeremy’s team to interact more with the owners-operators and even manufacturers for that matter…It’s absolutely critical, as we move forward, to look to commercial interaction to drive the technology improvements and innovation.”

As the military looks to different ways to purchase and manage their SATCOM resources, Mr. Hoene challenged the government to bring its problems to the satellite industry so that they could find innovative answers:

“We would like to see some bold initiatives. So, say you need an advanced package in Southeast Asia, or over the southwest Pacific. We would step up to the plate and do that in a heartbeat. We can do some experimentation and prototyping and then get these capabilities out to the field.” 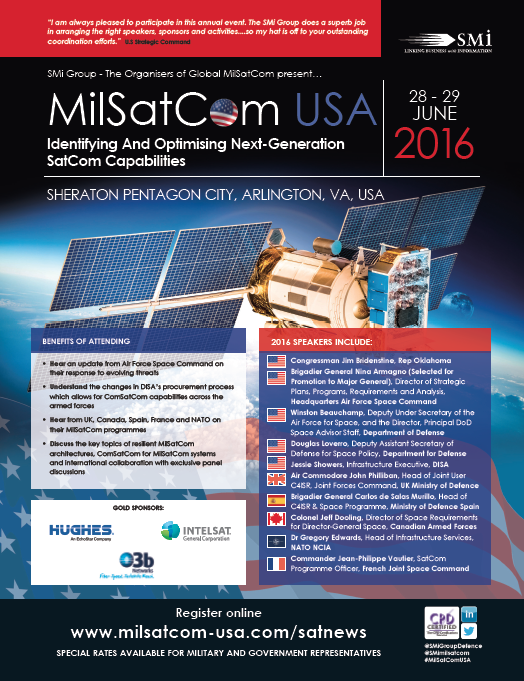