Within the space industry, there is a growing concern over how safe operations are in space. The Iridium incident this past February illustrates the fact that satellites are at risk of an accidental collision. Even though very little can be done about the number of objects already in space, the risks of future collisions can be reduced by a more precise and timely cataloging of these objects. Improving Space Situational Awareness (SSA) is an increasing priority across the space community. Owners and operators are investing in mechanisms to share their spacecraft positional data with each other while countries around the world are increasing their capabilities to find and track the objects in space.

Of particular interest to the geosynchronous orbit (GEO) satellite communication (SATCOM) operators, is the ability to detect and track objects at or near GEO. Within the past month alone, there have been several occasions where two satellites have come within 3 km of each other as predicted by USSTRATCOM’s Joint Space Operations Center. The 3 km separation may seem like plenty of distance until one realizes that, in many cases, the accuracy of the measurements exceeds this distance. Today, when the SATCOM operator is notified of these close approaches, there is very little they can do to help this situation — operators watch nervously for any indication of a malfunction on their spacecraft that would indicate a collision. Everyone agrees we must improve our ability to find and track these objects. This article discusses how sensors could be “hosted” on the GEO commercial satellites themselves to improve the location accuracy of objects in or near GEO.

There is no disagreement that SSA sensors at GEO would help to address this problem. The only remaining questions encompass how accurate and sensitive do the sensors need to be to truly contribute to the SSA mission. The answers to these questions are guided simply by how much one wants to spend on the sensors. The sensitivity of the sensor determines the size of the object the sensor can detect and how far away the object can be from the sensor. Generally, the more accurate and/or sensitive a sensor is, the more complex the design. Size, mass, power consumption and most importantly the cost of the sensor are directly related to its complexity. Therefore a balance must be found between the desired capability of the sensor and the contribution of the sensor to the SSA mission.

According to a MIT Lincoln Lab study, a mid-sized sensor in the 100 Kg range would provide an ability to detect and track microsatellite sized objects at distances great enough to provide meaningful and useful data to meet the established requirements of the SSA community.[1] The MIT study goes on to show that with SSA sensors hosted on as few as eight to 10 spacecraft, you could monitor nearly 100 percent of the GEO belt on a continuous basis. A sensor any larger than this “mid-sized” sensor may be able to provide additional capabilities, but the cost curve quickly increases and the hosted payload concept quickly loses its appeal.

An SSA sensor would need to be able to see objects in the GEO belt within its field-of-view (FOV). Therefore, the sensor would have to be mounted in an area where it could have a clear FOV of the GEO belt and not interfere with the commercial mission of the host spacecraft. This would generally result in the sensor being placed on a boom tower away from the spacecraft and behind communication antennas pointed towards the earth. Other sensor design constraints include sun-inclusion, thruster plume and jitter effects from the host spacecraft.

Commercial communication satellites do not require a great deal of timing or pointing accuracy when compared to satellites that normally host highly accurate sensors. In general, for a commercial SATCOM mission, if the spacecraft time is accurate within a few seconds, it is usually accurate enough. 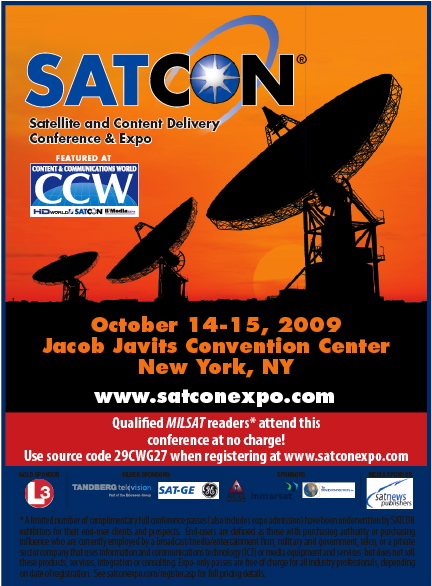 Timing accuracy for SSA sensor data will require a much more accurate timing source. This timing source will either have to be incorporated into the sensor or it would have to be an added requirement for the host spacecraft. Similarly, commercial satellites do not have very “tight” requirements for stability or pointing accuracy. The pointing accuracy requirement for a typical communication satellite is driven by the need to maintain antenna patterns on the surface of the earth. If the pointing of the spacecraft is maintained within 0.1 degrees, the spacecraft normally meets the operators’ requirements.

This accuracy is easily maintained with Earth sensors and a standard attitude control system. Another by-product of the pointing accuracy required for commercial communication satellite is a higher tolerance of jitter as compared to normal high-accuracy sensor host satellites. The MIT Lincoln Lab study discusses how a proper sensor design can meet SSA performance requirements without increasing the pointing and jitter control requirements of a standard commercial COMSAT.[1] Designing a sensor that can perform with the standard requirements once again keeps the cost lower. There is room for a trade study in this area as most satellite manufacturers offer upgraded Attitude Control Systems which greatly improve the pointing accuracy and stability of the spacecraft. These upgrades are available today with known costs.

All the factors mentioned above directly impact the cost and flexibility of hosting such a sensor on a geosynchronous communication satellite. By selecting a relatively light weight, low power consumption sensor which requires a small amount of bandwidth to transmit its data, the cost of hosting the sensor is kept to a minimum.

Now that we have addressed the type of sensor desired for a hosted SSA mission, let’s examine planning timelines. The typical commercial satellite planning and construction program starts about 36 to 48 months before a satellite is available on orbit for commercial service. As depicted in Figure 1 below, the planning phase is 12 to 18 months in length and then this is followed by a construction and launch phase lasting approximately 24 to 30 months. The optimal time to begin planning hosting sensors on a commercial satellite bus is during the early planning phase.

During this time period the commercial operator is analyzing potential sources of income which will come from operating the spacecraft over its average 15 years of life. This potential income is then compared to the associated costs for acquiring, launching, and operating the spacecraft. Based on this information, the project’s anticipated financial performance, usually using a metric such as its Internal Rate of Return (IRR) is calculated. If the projected IRR is not greater than the company’s minimum rate of return (typically arrived at by calculating what could be earned by alternate uses of company capital, such as investing in other projects, buying bonds, etc.) then the project is either modified to increase the IRR or, if that cannot be done, scrapped completely. 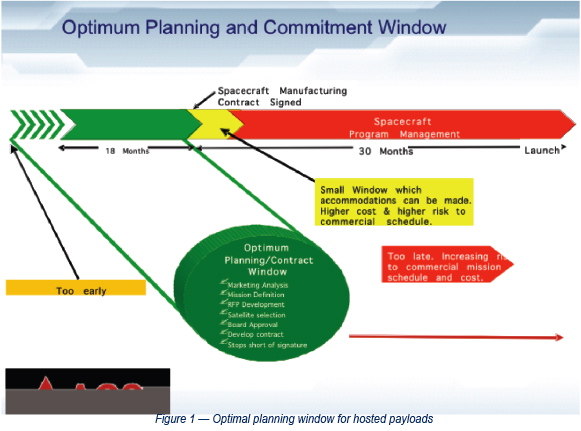 A typical commercial communication satellite can cost from $250M to $350M including spacecraft, launch, insurance, and on-orbit operations. The commercial models insure that over the 15 year operational lifetime of the spacecraft that the IRR will meet the investors’ expectations. The optimum planning window for considering hosting payloads is during the Industry / USG Opportunity Analysis period as shown in Figure 1. This time period is the most flexible period in the planning window. Any earlier than this and the plans for a specific spacecraft are too fluid and contain too much uncertainty to be able to establish any design criteria and orbit location. Any later than this, you end up with whatever is available from the host spacecraft and flexibility in design changes is highly constrained.

Discussions with leading sensor builders indicate that their developmental cycle is on the order of 24 months from sensor design through subsystem test and calibration. The design and integration process for a typical satellite construction and launch is illustrated in Figure 2, above. The sensor design, build and test can overlap with the spacecraft subsystem design and build, if the sensor design is mature and all interface requirements are known and well documented. These interfaces would include mass, size (to include all control and communications electronics), power, thermal and mounting constraints. If this information is known and incorporated into the design of the host spacecraft, the sensor could actually arrive at the spacecraft manufacture shortly after spacecraft integration begins. Therefore the sensor must be completed approximately 12 to 16 months before the scheduled launch of the host spacecraft. Given these scheduling constraints, the selected SSA sensor would have to be under construction months before its host spacecraft. This type of architecture is achievable if the US Government develops a sensor specification and establishes a sensor procurement pipeline. The sensors would then be provided to the satellite bus manufacturer for integration into the bus at the appropriate time.

Commercial satellites are routinely replaced based on age, lack of available station keeping fuel or to allow a service provider to upgrade its capabilities. Each commercial SATCOM operator maintains a plan of replacing spacecraft. The typical communication satellite is designed to last approximately 15 years. The two largest commercial SATCOM operators in the world, SES and Intelsat, operate about 100 such spacecraft. With 100 satellites combined, each lasting approximately 15 years, it takes six to eight replacement satellites per year to maintain their fleets. Even with this many potential hosting opportunities per year, not every one of these launches is an ideal candidate for hosting an SSA sensor. As discussed earlier, 10 sensors equally spaced around the GEO belt would provide nearly 100 percent coverage of the GEO belt down to the microsat size of object.[1] Using mathematical formulas only understood by rocket scientists, it can be calculated that you would want to host a set of SSA sensors on a GEO spacecraft approximately every 36 degrees (360 ÷ 10).

Commercial spacecraft are not evenly spread out around the GEO belt, they tend to be concentrated in higher numbers in areas with high demand and more sparsely spaced in areas of lower demand. Therefore it is possible that two, three or even four consecutive spacecraft would be going to roughly the same area in the GEO belt and only one or two of them would be adequate candidates for hosting an SSA sensor. 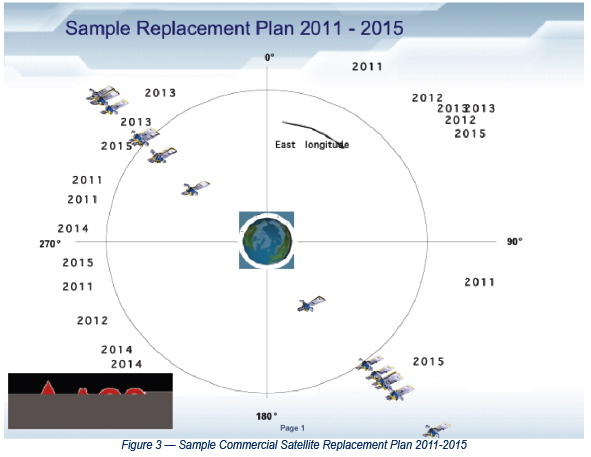 Spacecraft that are going to be launched in 2011 or earlier are more than likely already designed and under construction. Based on the optimal planning timeline presented above, hosted SSA plans should begin with satellites that will be launched in 2012 or later. One potential replenishment plan from 2011 to 2015 is presented in Figure 3 above. This plan shows that you could select 8 – 10 spacecraft in a four year period which would come close to placing a hosted SSA sensor at or near the desired 36 degree spacing.

In order to continue our ability to safely operate in space, increasing our ability to track objects in space more accurately and timely is an absolute necessity.

This increased need is driven by the increased number of satellites operated in space, the increase in debris and technology advances that are producing smaller and smaller satellites. An SSA program aimed at dramatically increasing the detect and track capabilities at GEO could achieve full operational capability within six years by leveraging the hosted payload concept.

The key to accomplishing this task is to select and define an appropriate sensor in 2010 at the same time begin working with the commercial communication satellite providers to identify optimal hosting opportunities. Based on this approach, it is highly conceivable that a complete geosynchronous “neighborhood” watch program could be completed within 48 months of initiation.