The US Department of Defense (DoD) is struggling to address modernization requirements within the spending limits directed by the Budget Control Act (BCA) of 2011.

This is particularly true in the area of recapitalization for space, where new threats are also driving changes in the US operating posture. This is one reason why DoD leadership is closely watching advancements from the commercial sector, as a means of implementing innovation, augmenting satellite communication (SATCOM) capabilities and reducing the strain of an overstretched and essentially flat budget.

In terms of action, the time is now: The Obama Administration released a National Security Strategy (NSS) in February 2015, addressing challenges in meeting the service men and women’s needs in a period of fiscal uncertainty.

Meanwhile, the fiscal year (FY) 2017 budget reveals how the decade ahead will require significant modernization of front-line weapons systems, which have endured the enormous stresses of long-term combat operations. 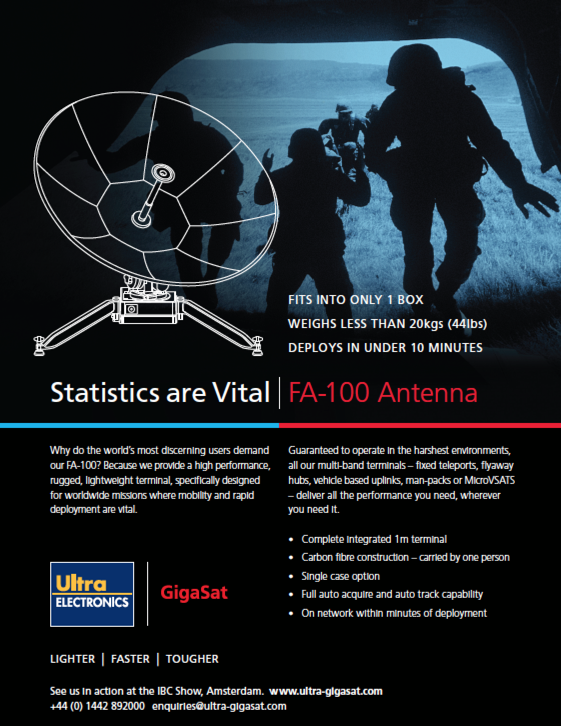 The DoD will also have to implement new weapons to support a smaller force structure that will meet continuing and emerging threats around the globe. The US Air Force is expected to take a particularly hard hit in this modernization crunch, with current budget funding levels unable to pay for new programs to boost capabilities.

On the space segment side, the satellite systems on orbit are aging, even while the programs of record are completing their deployment schedule.

Fortunately, lawmakers and the DoD recognize the potential for grave risk in space and are beginning to respond accordingly: as laid out in the FY 2016 National Defense Authorization Act, the Secretary of Defense must conduct an Analysis of Alternatives (AoA) for a follow-on, wide-band satellite communication system to the Wideband Global SATCOM (WGS) system, which includes space, air and ground layer communication capabilities of the DoD.

Military decision makers are increasingly viewing the expansion of use and the intentional integration of commercial satellite communications (COMSATCOM) as they move forward, seeking to adopt an enterprise-level, integrated SATCOM architecture and strategy, which will allow the DoD to manage military satellite communications (MILSATCOM) and COMSATCOM as a holistic capability to best support the full spectrum of military operations.

Central to the success of this integrated architecture is the incorporation of SATCOM as a Service (SaaS), which brings greater efficiencies and responsiveness to meeting DoD requirements, in contrast to broadcast-centric fixed transponder leases.

This frees military members from the administration of disparate networks and allows them to focus on critical defense operations. Rather, with SaaS, information can flow seamlessly from Point A to Point B using commercial capacity directly with WGS. 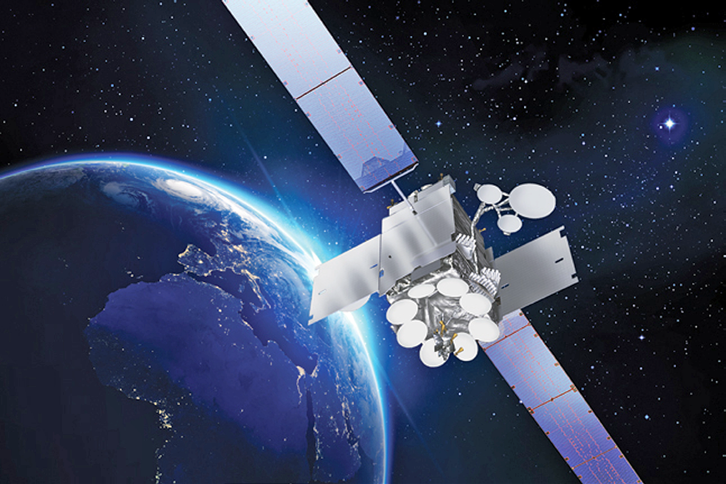 In the most innovating and interoperable examples of this unified approach, the military users employ their existing WGS-certified terminals, thereby attaining the ultimate state of efficiency and functionality affordably. When world events trigger usage spikes, increased capacity can be readily accessed. Thus, users benefit from the most flexible and immediate of technologies without the need to invest in additional stove piped or disparate infrastructure.

In other words, SaaS can redefine the way the government employs and acquires satellite communications.

For far too many years, multiple DoD branches have administered multiple parts of the package, turning to private industry generally on an “as needed” basis: The Navy supplies the one element of the “space” part, i.e., the UHF satellite system. The Army provides the many aspects of the “land” part, i.e., both military-owned and commercial terminals for units.

The Air Force is in charge of global, protected wideband—the Defense Information Systems Agency (DISA) leases commercial capacity. This new integrated architectural approach, supported through use of SATCOM as a Service, allows for the provisioning of an end-to-end capability to meet operational requirements rather than simply having individual pieces of the puzzle asynchronously acquired and thus putting the burden on the military user to cobble together the end solution.

In August 2014, the DoD indicated in its Satellite Communications Strategy Report that a five year SATCOM plan should include a stronger commercial presence within a more cohesive, integrated architecture.

“(A) decentralized approach impedes centralized, multi-year acquisition and hinders the DoD’s ability to manage MILSATCOM and commercial SATCOM as a holistic capability to best support the warfighter,” according to the report. 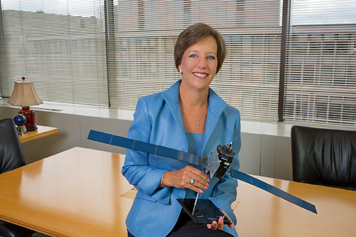 The DoD continues to note that the agency “may have to move toward a ‘shared resource’ model of usage, versus the current ‘my demand/my capacity’ separatist philosophy. This will require a centralized management strategy with resource monitoring and management instantiated on an ‘enterprise-level’ instead of the current method that allows users to implement (and pay for) resource monitoring and usage management at their own discretion.” SaaS as a Service supports the implementation of such an enterprise approach.

In further complicating the issue, agencies are under mounting pressure to conform to Lowest Priced Technically Acceptable (LPTA) policies for purchases. Under LPTA, decision makers select vendors who offer a technically acceptable proposal at the lowest evaluated price.

LPTA does have its place, even in the military community, though only for commodity purchases. Mission-critical SATCOM, however, does not warrant a commoditized, “least common denominator” approach.

Every operational environment presents an array of scenarios and potential threats. These may include a variety of security requirements (such as encryption differentiators), geographic challenges and functionality requirements such as video distribution, Intelligence, Surveillance and Reconnaissance (ISR) support as well as mission unique, capability-focused considerations. These must be addressed through a more discerned acquisition approach.

“We need to get our heads around the fact that space might not always be a peaceful sanctuary,” Secretary of the Air Force Deborah Lee James said at this year's Space Symposium in Colorado Springs, Colorado. She further stated, “We need to ensure that our mission can get done despite what could be a very challenging environment in space to include challenges of one day having warfare effects in space. We must not let potential adversaries ever deny us the use of space.”

The current budget stands in the way of such intent, funding for strictly the minimum required for America's space systems, as driven often by the business-as-usual acquisition approaches. With the DoD now seriously considering revamping the way it conducts future military space acquisitions, it is clear that innovation-supporting recapitalization is critical for our nation to keep pace with evolving threats, while taking advantage of the incredible innovations and diversity provided by the commercial satellite industry.

A shift to SaaS would inspire a profound change of mindsets. No longer would agencies think in terms of “buying” more and more government-owned and operated satellite communications simply because “that is the way we have always done it.” Instead, they would primarily consider leveraging the immense breadth and scope of COMSATCOM offerings enriched capabilities—while still benefiting in terms of affordability and focusing the smaller amount of investment resources towards the proper amount of purpose-built exquisite and government-unique assets.

To underscore the urgency here, consider this testimony from the Air Force before the Senate Armed Services Committee this past March. “We view our national security as inextricably dependent on space-enabled capabilities. At the same time, space has become contested, congested and competitive. Our space capabilities today are facing advanced, demonstrated and evolving threats, which require fundamental changes in the way we organize, train and equip our forces… Legacy space acquisitions relied on packing as much capability as possible into a few systems creating critical vulnerabilities. Current budget realities drive us to rely on legacy systems, while warfighter demands have driven the need for more capable systems.

"We must provide space capabilities that assure performance of military space functions, regardless of the hostile action or adverse condition. We must invest smartly in the highest payoff capabilities that enhance space domain mission assurance to include resilience, defense operations and reconstitution of our space systems and architectures to ensure US and Allied use of space through all phases of conflict. We seek to balance military and commercial systems and leverage international partner capabilities to allow the US to share the cost of space power; provide additional coverage in areas the US requires assistance in; and create a coalition structure that can promote deterrence.”

In addition, DoD leaders such as General John Hyten, Commander of US Air Force Space Command, have urged for an overhaul in how COMSATCOM is acquired.

“We have purchased the commercial product in the most inefficient way possible," Hyten has said. "You're never going to get the best price you can when you buy something on a spot market one year at a time.”

General Hyten is driving a two-way engagement with industry leaders—leaders with valued expertise about new strategies. While a formal commitment to change will most likely not be established until completion of the aforementioned AoA, the potential remains for a seismic shift in how industry works with the military community.

The pursuit of innovation across the space portfolio can reduce acquisition burdens, as commercial advances are more rapid and commonplace. The Congress and internal DoD advocates are pushing for reform and adoption of advanced approaches in the space enterprise—exemplified by SATCOM as a Service.

Eliminating organizational hurdles toward this goal will pay dividends and address funding shortfalls. The sooner COMSATCOM is actively integrated into the core DoD architecture, the greater the possibility of savings in enabling service men and women to safely—and successfully—perform their missions.
www.inmarsatgov.com/