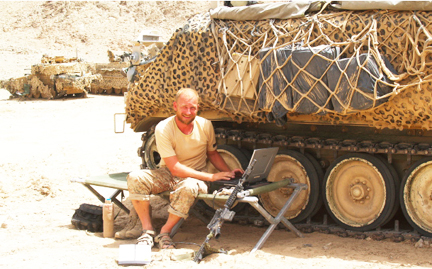 This is not the kind of cry that a loving wife expects to hear in the background whilst talking to her husband on the telephone. But when Danish Army Sergeant First Class, Flemming Ulrich thought he would check in with his family at home using his Explorer 500, he was not expecting it to start raining rockets. Fortunately, Flemming and his unit made it through the barrage unscathed and he was soon able to call his wife back and let her know they were all safe. 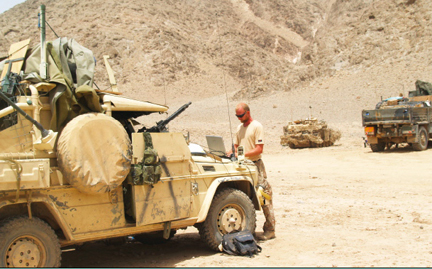 Flemming Ulrich’s job as a Sergeant First Class and as a military technician was to make sure all the vehicles, weapons, and communication systems worked as well as possible. With this commitment in mind, he organized with Thrane & Thrane to field trial a BGAN system during his tour in Afghanistan, to find out if such a system could work for the military.

A Vital Need... Communication
“If a vehicle breaks down in Afghanistan, the squadron comes to a stop and that can stop the whole battalion. And the vehicles break down very often in this harsh terrain. The Danish units are organized differently from the British. As we are fewer troops, we need to be more self-sufficient. Therefore, we brought big trucks to the desert with ammunition, water and food rations etc.,” explains Flemming.

“Obviously in these conditions communication is very important so just before I left, I met with Mr. Anders Pjetursson of Thrane & Thrane. We discussed satellite communication and it ended up with me taking an EXPLORER 500 to the desert to make a field-test under the hardest conditions you can think of.”

The Ultimate Test
The EXPLORER 500 is built to last. The system is designed for use in extremely harsh conditions by engineers, government, and NGO workers, disaster relief organizations, and the military, to name but a few. The war in Afghanistan, though, is truly the ultimate test for the system. According to Flemming, it held it’s own in conditions that most of us would find it hard to imagine.

“As we patrolled the desert for long periods, it (Explorer 500) was our only means of Internet communications. That meant that I could communicate with my family at home. It also meant that my wife could write me emails and that I could send her updates — non military, of course — and let her know that I was okay after our many battles with the Taliban,” said Flemming.

Flemming’s experiences in the desert reflect the user-friendly design that is the heart of the EXPLORER. “The EXPLORER was quite easy to use. I used it in thunderstorms, sandstorms and in wild rainstorms with no problems. I could always get a connection with the satellite. Even temperatures of 55 degrees in the shadow were no problem. The computer would pass out before the Explorer ,” said Flemming. 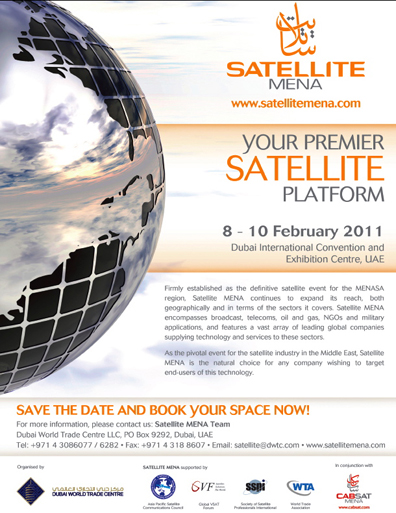 Under Fire
“One particular episode was out of the ordinary. It was when we were in a joint operation with British and American forces to take the city of Sangin. Normally I wouldn’t make calls during operations, but this was a very long operation and nothing really happened in our sector, so I called my wife to tell her, that everything was fine. She had just answered the call, when the first Taliban rocket hit the ground a few hundred meters away. She heard the detonation and people yelling “incoming”. I dropped down and told her, I was busy, and that I would call later. After about 30 minutes I was able to call her again.

“My wife had just picked up the phone once more, when another rocket hit the ground a kilometer away and my colleagues yelled ‘incoming’. I dropped down again, told my wife that I was still busy, and that I would call again later. It took more than two hours before we had finally defeated the Taliban and I could call her on the satellite phone.“

Tough Conditions
Flemming’s experiences in Afghanistan show that EXPLORER 500 will withstand the harshest conditions and just how important communication with loved ones can be for the troops on the ground. From a military perspective, Flemming’s commanding officers are very interested in getting the EXPLORER for operative use, but it can take a while before the military command are convinced, especially as the signal encryption is a specialized job in times of war. In addition to being a moral boost for the soldiers, EXPLORER could one day play an important operational role in future conflicts.

“The war in Afghanistan, though, is truly the ultimate test for the system and it held it’s own in conditions most of us would find hard to imagine.”< br />

Voice and broadband available anywhere on the planet — the Explorer 500 harnesses the power of Inmarsat’s BGAN, or Broadband Global Area Network, which provides broadband quality and speed, almost anywhere on the planet. BGAN is the world’s first mobile communications service to provide voice and broadband data simultaneously through a single, portable device on a global basis — that’s why it is used by professionals whose job depends on them being out in the field, often miles from civilization.