Mobility
The article quotes Rebecca Cowen-Hirsch, Senior Vice President of Government Strategy and Policy for Inmarsat’s US Government Business Unit in Washington, DC, as saying, “Military users have to access the same degree of capability on the move as they would if they were stationary, for all operational stages.”

They can no longer count on predetermined areas or fixed locations, given the current demands of manned and unmanned airborne intelligence, surveillance, and reconnaissance missions, for example.
Knowing that they can be deployed anytime, anywhere, “mobility is a capability that is very important in the design of satellite communications,” said Cowen-Hirsch

Whether on the move, in aircraft or ships, or on the ground, at military bases, the same access to high-speed data communications is needed because military operations can be highly unpredictable. The readiness of today’s armed forces requires a truly global connection, because from a training base at home, troops might be sent out on a search and rescue mission in the middle of the ocean at a moment’s notice. 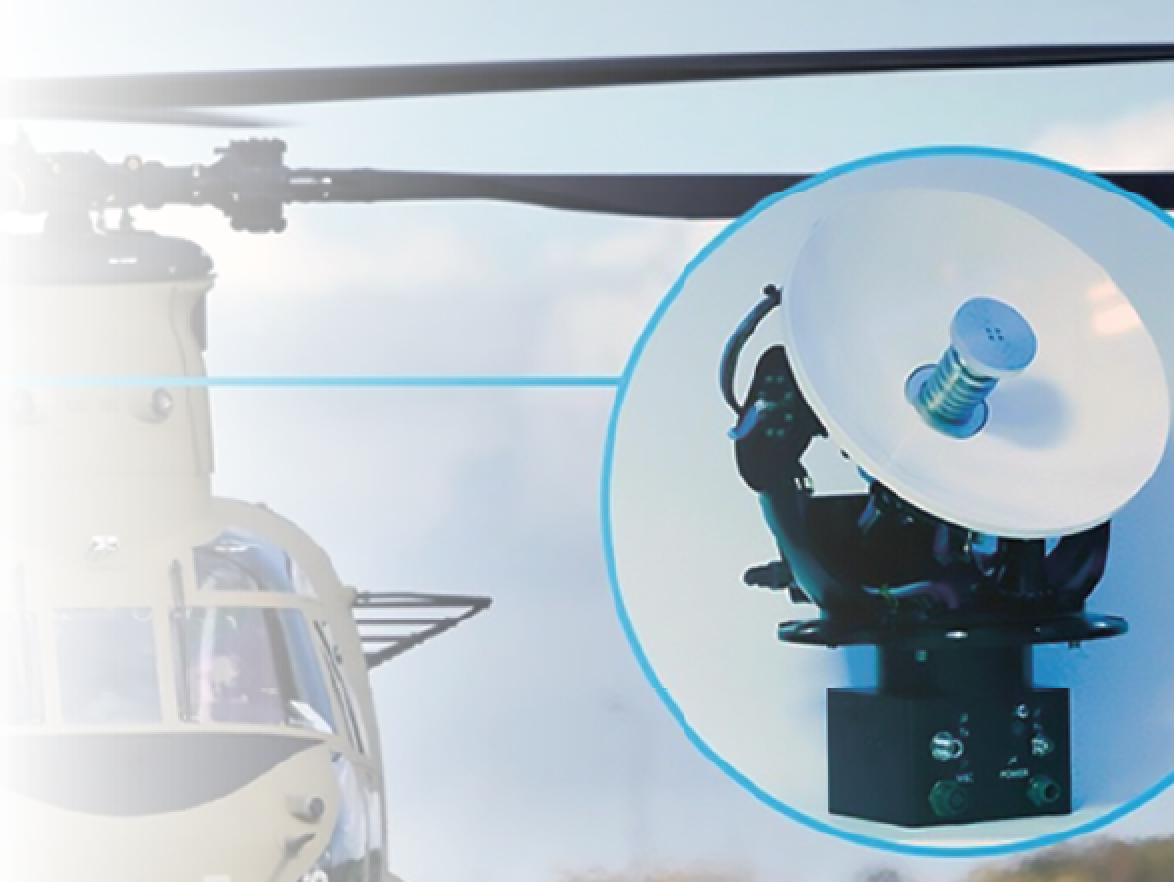 Pilots, for example, should be able to take off from one location and fly across multiple spot beams without ever losing connectivity — and without having to manually repoint their antennas. At the same time, airborne SATCOM systems must transfer between satellite signals automatically and seamlessly. For example, aboard Air Force One, BLOS connectivity enables the U.S. President to communicate with anyone, anywhere.

BLOS is an ideal SATCOM solution because today’s satellite architectures are capable of supporting consistent, uninterrupted connectivity everywhere in the world. Due to the military’s need for on-demand access and high reliability, one solution is to leverage commercial satellites to boost the effectiveness, flexibility and redundancy of military satellites for global unmanned missions. 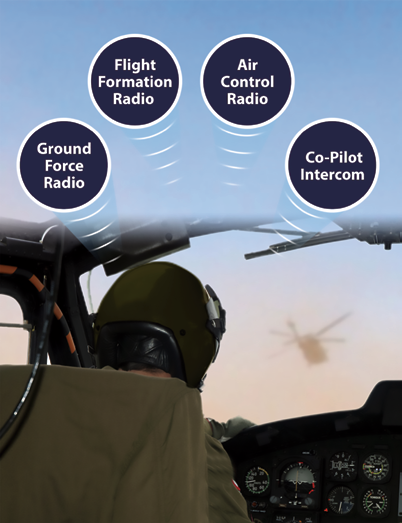 This initiative is in contrast to broadcast-centric fixed transponder leases which require pre-commitments for large tracts of bandwidth in a best-guess, piecemeal approach as to where, when and how much bandwidth
will be needed.

Security
For armed forces, having a secure, on-the-move connection does not only ensure their safety, but also enables high throughput without interference or loss of service wherever they may be.

Thus, the objective to secure satellite communications continues to evolve. Because many of today’s military challenges are geographically-based, users are seeking broader protection and anti-jamming (A/J) resistance to enhance resilience.

Technology Looks Skyward
The increase in the demand for communications at any point on earth, at any time of day or night, is leading technology companies to look skywards and to develop airborne beyond-line-of-sight (BLOS) SATCOM and 3D audio systems, as well as earthbound line-of-sight (LOS) tracking and control systems used by ground forces to communicate with airborne targets, like UAVs.

The challenges facing such systems include the ability to withstand extreme environmental conditions and maintain the highest quality standards — while keeping costs competitive.

Airborne BLOS SATCOM
The challenge for solution providers is to develop a single airborne stabilized VSAT system capable of delivering high-quality broadband communications to many different types aircraft via satellite.

The terminal must be small enough to fit into the tight spaces usually allocated for communications equipment within the aircraft — with antenna sizes as small as 12 inches (30 centimeters) — but deliver high-speed Internet-based data communications to fixed- and rotary-wing aircraft as well as UAVs.

The systems must be built to military standard (MIL-STD), with minimal Size, Weight and Power consumption (SWaP) properties, and must also be ruggedized to overcome the many environmental challenges posed by mission-critical platforms. 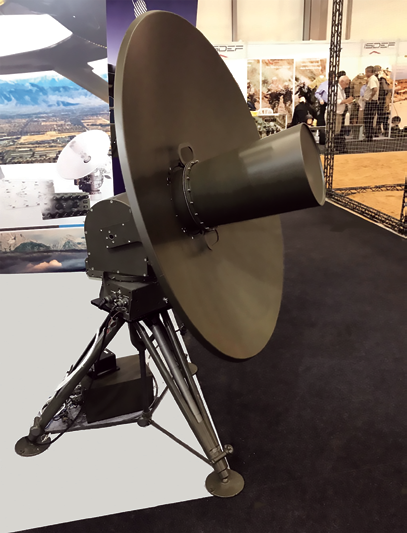 LOS terminal for the tracking and control of airborne targets,
by Orbit Communications Systems

Airborne BLOS SATCOM terminals should include:

Features such as 3D Audio, Adaptive Noise Reduction and Voice-Activated Detection should be standard, to deliver a 360-degree clear audio experience with outstanding benefits for pilots, like increased situational awareness and flight safety, and reduced workload and fatigue.

With 3D Audio, pilots can pinpoint the direction of the source of the sound, whether it be the voice of a crew person or air traffic controller, a system alert or a threat warning.

LOS Tracking and Control of Airborne Targets
Although the Military Embedded Systems’ article stressed the importance of airborne BLOS systems, there is an equally compelling need for earthbound LOS tracking and control systems used by ground forces to communicate with airborne targets, like UAVs.

Such systems should be portable (with the ability to be carried, assembled and disassembled by two people) and fully self-contained. They should also come equipped with an elevation-over-azimuth positioner unit with a built-in tracking controller, as well as a mounted directional antenna and data-link unit.

LOS terminals for the tracking and control of airborne targets should include:

• Controller inside the positioning unit, connected by a single LAN cable
• 28V DC, instead of AC, current, to eliminate safety issues
• Slip ring topology, for up to 70 simultaneous circuits
• Full duplex operation, for complete tracking and control capabilities
• Advanced tracking algorithms
• Compliance with MIL-standard 810 (mechanical/environmental) and 461 (electro-magnetic interference)
• Whole system — including C-band directional antenna — mountable on base riser, or a tripod in emergency situations

In Conclusion
In the dynamic world of military communications, with its ever-present demand for mobility, BLOS and LOS capabilities and security, there is a continuous need for innovative technology and systems.

This article presented three airborne-related solutions — two, aboard aircraft (BLOS SATCOM and 3D Audio systems) and one, on the ground (LOS terminal for the tracking and control of airborne targets).
www.orbit-cs.com

Stav Gizunterman is the Vice President of R&D at Orbit Communications Systems Ltd. He was appointed VP R&D in 2017, after holding senior management positions in R&D and Product Marketing at the company since 2012. Prior to joining Orbit, he served in a variety of engineering roles at Elbit Systems, a global solution provider focused on the defense, homeland security and commercial aviation markets. Stav holds a BSc in Communication Systems Engineering from Ben-Gurion University of the Negev, in Israel, and an MBA from Heriot-Watt University. He can be reached at stav.gizunterman@orbit-cs.com