Increasing broadband SATCOM On-The-Move (SOTM) is a strategic requirement for Network Centric Warfare. Operating at higher frequencies is intrinsically linked to achieving this objective. The Wideband Global Satcom (WGS) System offers U.S. DoD and Australia — through joint partnership — an opportunity to access significantly increased SHF and EHF spectrum. This spectrum access is essential in realizing broadband SOTM across a variety of military platforms including air, naval and the more challenging land mobile.

EM Solutions was awarded a contract to develop a Mounted Battle Command Ka-band Satcom On-The-Move System under the Australian Defence Force (ADF) Capability and Technology Demonstrator (CTD) Program. The objective was to develop a SOTM terminal that was suitable for WGS operation and would allow the ADF to investigate, demonstrate, and examine its potential as a key system supporting the ADF’s Network Centric Warfare strategy. 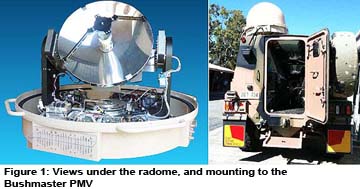 There were two main requirements driving the design. Firstly, the RF and antenna performance had to support the required uplink and downlink data rates of 4 Mbps and 1 Mbps under typical operating conditions. This is discussed further in the Field Trial Setup section later in the article. 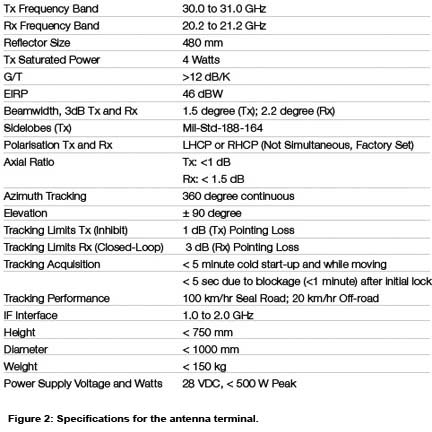 Secondly, the antenna had to track the satellite to within some allowed pointing error. Determination of the allowed pointing error was not trivial, as a number of factors had to be considered. These included: link budget effects of pointing-loss, existing regulations for stationary systems, and interference potential.

After consideration, a design target of 0.3 degree maximum pointing-error was selected.

Two of the earliest design challenges were the selection of the antenna type and tracking method, and until these had been decided upon, design of other subsystems could not progress. A novel implementation of the well proven parabolic reflector antenna was selected as such offered the best electromagnetic performance (i.e., sidelobe), defined tracking requirements, and acceptable dimensioned constraints. (These were requirements of the CTD project.)

Once the antenna type was selected, the tracking approach could be considered. There are two main types of tracking. One approach is Inertial Navigation Unit (INU) based tracking, where a high performance INU is used to determine the vehicle’s position and attitude — this information is used to steer the antenna to the satellite. 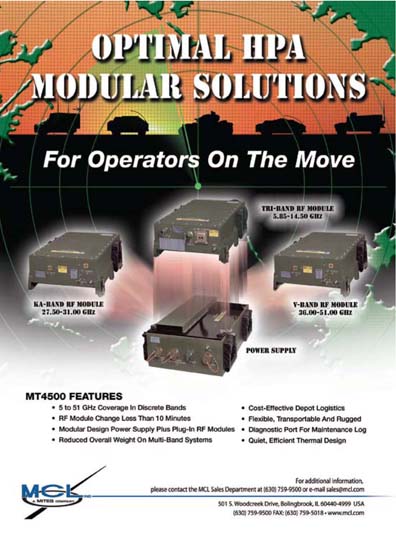 The other approach is closed-loop tracking, where the pointing error is determined from the satellites beacon. A closed-loop approach was selected, which allowed the use of a less expensive INU, a lower precision mechanical design, and is more robust.


Specification for the antenna terminal are offered in Figure 2. 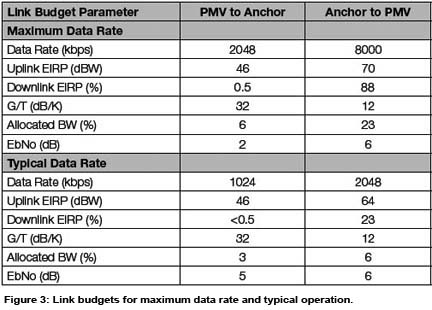 Operating Modes
The antenna terminal has a select number of operating states that are visible to the operator Ignoring the power-up mode, the operating modes are:

Searching
The searching mode is basically an open loop tracking mode. It is used for initial acquisition and for re-acquisition when the satellite has not been tracked for extended periods of time. In this mode, the INU is used to determine the vehicle position and attitude, and this information is used to point the antenna toward the satellite.

A limited scan is conducted around the pointing direction calculated from the INU data. If the vehicle is not in motion, the INU cannot accurately determine the vehicle heading. (The INU does have a built in compass. Unfortunately, its performance is degraded by the proximity of the antenna positioning motors.) 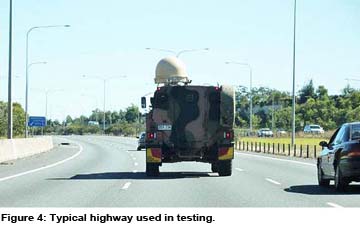 Tracking
In this case, the antenna terminal continuously uses INU attitude information to calculate the elevation angle to the satellite, and then conducts an azimuth scan. Once the beacon has been detected, the control system switches over to the tracking mode.

In this mode, the beacon is used to estimate the pointing-error, which is then used to continuously steer the antenna back to the satellite.
If the estimated pointing error is too big, the control system commands the TX to mute. If the beacon strength suddenly drops (i.e., due to obstruction by trees), the antenna terminal switches to gyro holding mode. 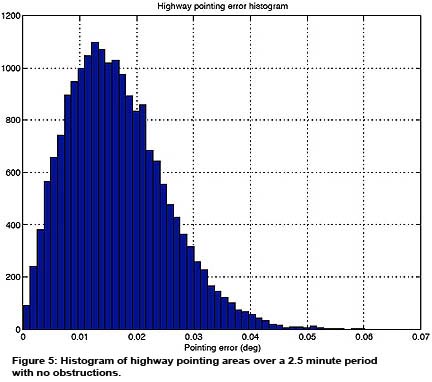 — Field Trial Setup
Field trials were conducted in August 2010, with assistance from Defence Science and Technology Organisation (DSTO), BAE and 8/9 RAR based at Gallipoli Barracks Enoggera. During field trials, the SOTM antenna terminal was operated as the vehicle drove on main highways, suburban roads, dirt roads and off-road.

Integration With Bushmaster
Integration of the antenna terminal on the Bushmaster was performed by BAE. The terminal was fitted to the rear-hatch opening using a temporary mounting plate. A baseband system was installed inside the vehicle, and included an MD-1366 EBEM modem, an Ethernet router, a reference oscillator, and a PC for monitoring.

Satellite services were provided by DSTO, which included: a digital TV video signal streamed to the vehicle; video from a forward looking IP camera streamed out of the vehicle; VoIP services allowing phone calls to be placed and received from inside the vehicle; and web-based management displays to assist with monitoring terminal performance. 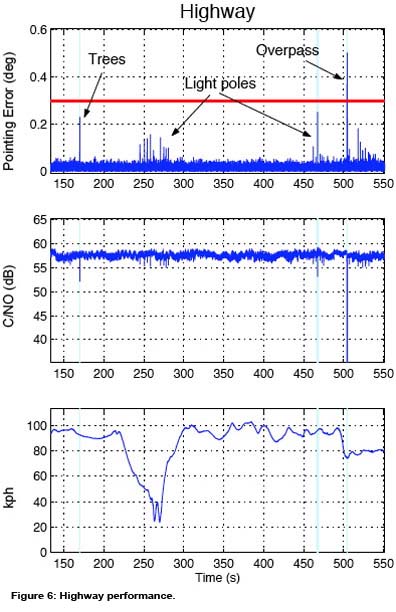 Link Budgets
DSTO coordinated satellite and modem configurations to achieve various link rates for testing the SOTM antenna terminal. Figure 3 on the next page gives the link budgets used for maximum data rate and for typical operation during testing. The ADF Ka-band Defence Payload Segment onboard Optus C1 was used for the testing.

Typical Results
To verify correct operation of the antenna terminal relevant internal variables were logged, in conjunction with Google Earth, and correlated with location during test drives. This allowed visibility of variables such as operating mode, estimated pointing error, beacon C/N0, motor torques and GPS location.

Logging GPS information was very useful, as it allowed correlating events, such as switching out of tracking mode, with obstructions due to trees and bridges.

Highway + Suburban Roads
Good performance was observed during highway driving. Modem events, such as sync-loss and bit errors, were only observed when obstructions were present. In general, obstruction by trees was not a problem on major highways, as the trees were generally back from the road. On suburban roads, tree obstruction was common. Figure 4 on the next page shows a typical highway used during field testing, and Figure 5, also on the next page, shows the distribution of pointing errors during a 2.5 minute period of highway driving. Figure 6 plots six minutes worth of data gathered during highway driving. 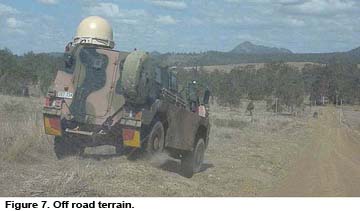 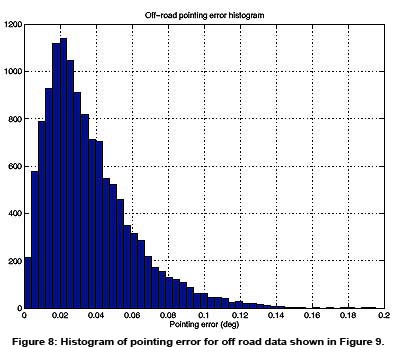 — Overpasses
Overpasses were encountered frequently during highway driving. Figure 10 shows data gathered when passing under an overpass. Upon encountering the obstruction, the antenna terminal detects a rapid drop in beacon signal power and switches to gyro holding mode (shown as light-blue in plots). Gyro holding keeps the antenna pointed at the satellite’s position, so that after leaving the underpass the antenna terminal can quickly return to tracking mode.

The reacquisition time was typically much less than one second during the field trials, and in many cases this enabled the satellite modem in the PMV and the anchor station to maintain carrier lock through these blockages.

The view of the overpass is illustrated in Figure 11.

Trees and Light Poles
Figure 12 shows a typical highway scenario as seen from the Bushmaster PMV, note the light poles in the view. Trees and light poles close to the road edge can produce very short term obstructions. Figure 13 shows the effect of driving past a series of light poles. In this case, the light poles produced short term reduction in beacon C/N0 (Note: Pointing errors should be ignored). However, the EBEM modem still retains lock with these types of short-term transient interruptions. 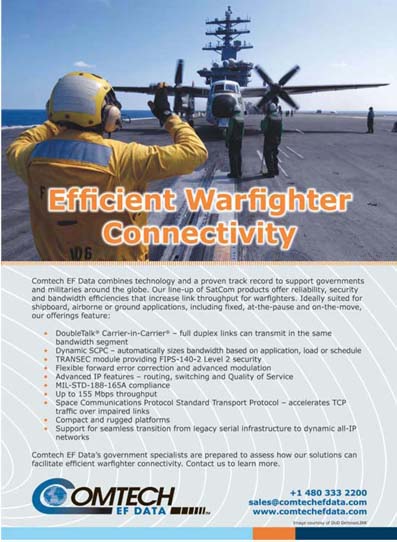 Modem bit sync loss was a common occurrence, with a short interruption to data flow. Importantly, carrier lock loss was not common.

Tunnels
Tunnels obviously produce an extended blockage to the satellite, and drift of the gyros can result in a significant antenna mis-pointing when the vehicle exits the tunnel. The actual pointing error can be so large that the satellite would not be reacquired. To handle this situation, the antenna terminal switches to search mode after an extended period of gyro holding.

The response to extended blockage during motion was tested by driving the Bushmaster PMV through a 6.8 km tunnel in Brisbane. The tunnel takes approximately four minutes to transit. This satellite blockage is long enough for the antenna terminal to revert to the search mode as the Gyro-hold timeout was set to one minute in field tests. In this particular test, it was observed that the antenna terminal acquired the satellite approximately 45 seconds after exiting the tunnel. It should be noted, however, the reacquisition process was made more difficult by the presence of a number of overpasses and large metal overhead street signs at the exit of the tunnel.

A standard Frequency Division Multiple Access (FDMA) modem is not the most appropriate waveform for use in an environment that includes blockages. A more burst acquisition nature modem, with shared outbound (to vehicle) carrier, to improve satellite power efficiency, would be preferred. 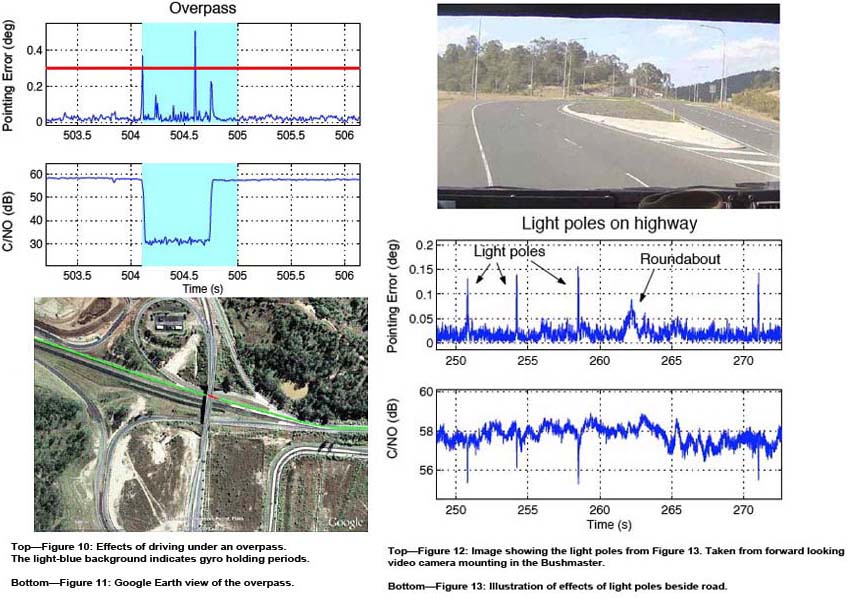 Peter Woodhead has been directing EM Solutions' business and product developments since its establishment in 1998. He has 30 years experience in design, manufacturing and service industries including over 20 years in the telecommunications sector, and holds an Engineering Degree and MBA in marketing.