As most know, General John Hyten took over the leadership of the U.S. Air Force Space Command in August, succeeding General William Shelton, under whom he had been vice commander for two years.

Both men have displayed a keen understanding of how Air Force Space Command can take greater advantage of the commercial satellite resources available to the warfighter. We at Intelsat General are quite pleased to see General Hyten selected to follow in General Shelton’s footsteps.

General Hyten is an engineering graduate of Harvard University and has spent his 33 year Air Force career working on technology and space challenges. His wide-ranging experience has given him a broad view of the issues facing Air Force Space Command as it seeks to protect America’s ability to safely use space resources for communications and remote sensing.

He is a keen advocate of maintaining United States superiority in space and of the nation being able to maintain space-based communications under any circumstances. 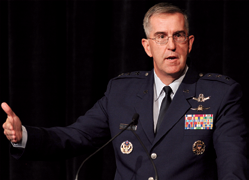 As General Hyten said in his recent speech at the Air Force Association’s Air & Space Conference in mid-September, “We have to figure out how to fight through the challenges we face and still deliver the capabilities that our warfighters absolutely are fundamentally dependent on. We have to do that. It is our sacred responsibility.”

In that and other speeches General Hyten has given in the past couple of years, he has focused on the military’s need for a survivable space architecture, one that requires space assets to be “disaggregated” over a number of platforms rather than concentrated on a handful of satellites.

His thinking on this topic has spread throughout the commercial industry, leading to increased interest in hosted payloads and other means of shifting important military requirements, including communications, to widely dispersed commercial satellites. 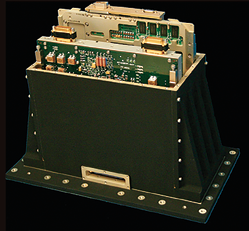 The Cisco IRIS router, the payload aboard the Intelsat 14 satellite.

Intelsat General has been working on hosted payload concepts for years, starting with the Internet Routing in Space (IRIS) technology demonstration payload launched in 2009 for the Department of Defense (DoD) aboard the Intelsat 14 satellite.

Commercial companies initially promoted the hosted payload concept as a means of economically delivering a capability to space. The Australian Defence Force (ADF) estimated that it saved $150 million by hosting a communications payload aboard Intelsat 22 in 2012, rather than building and launching its own ADF satellite.

Hosted payloads remain economical and their role in spreading government space assets over many satellites—disaggregation—has become important to the Department of Defense (DoD).

As General Hyten said in his Air Force Association speech, “Resilience is made up of a number of things. Disaggregation could be a big piece of that, because right now we have a very small number of satellites on orbit and our adversaries know exactly where they are. If they know exactly where, then it’s fairly easy to figure out how to deny the capabilities that comes off those satellites.”

This concern led Air Force Space Command to create the Hosted Payload Solutions program, HoPS for short. In July, Intelsat General was one of 14 companies selected to bid on future HoPS contracts to build and launch Air Force payloads on commercial satellites. 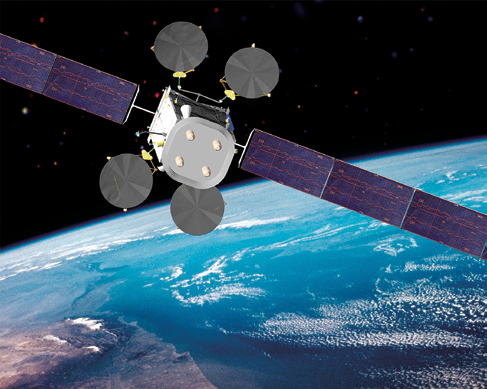 Artistic rendition of the Intelsat-22 satellite, which carried a UHF payload that provides services to the Australian Defence Force. Image is courtesy of Boeing.

The continuing pressure on federal spending has given General Hyten one of the toughest jobs in the military. He said recently in an interview with Space News that he fears another round of across-the-board budget cuts “will break Space Command.” While the Air Force can ground training flights to save money, Air Force Space Command can’t just shut down a satellite constellation without a long-term impact on the global communications capability of the U.S. military and a very real impact to national security.

General Hyten is looking for ways wherein he can trim spending, and a recent request for studies of how commercial companies could take over some of the Air Force’s ground-based satellite control operations provides an innovative example. Intelsat General was selected to participate in one of these studies.

However, as we have often said, the U.S. military still needs its own space capabilities for the most vital of functions. Commercial companies, such as Intelsat General, can provide a portion of the satellite capacity, ground networks and other solutions necessary for U.S. government communications.

General Hyten is a leader who knows what that commercial role should be—Intelsat General looks forward to working with him over the coming years in support of his efforts to maintain U.S. space superiority that is affordable and survivable.