On March 11, 2011, at 2:46 p.m., a 9.0 magnitude earthquake occurred 100km off the coast of Japan, centered just East-Northeast of the city of Sendai. The underwater quake created a tsunami 10 meters high, which crashed into the shores of Northern Japan, devastating 140km of the coastline and travelling inland as far as 10km. The devastation was beyond belief. The massive wave removed almost all evidence of civilization. What remained was a debris field that resembled an active war zone. 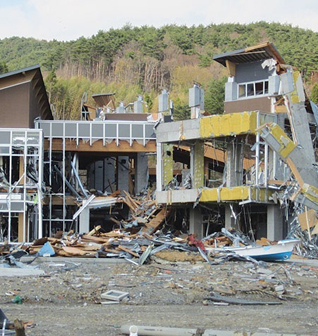 The most obvious and convenient communication tool for any disaster survivor is his or her cell phones. Given the magnitude of this earthquake in Japan, the resultant tsunami, the interruptions of electrical power as well as the breakage in the copper and fiber communication lines connecting remote sites, the cellular network was almost completely disabled throughout the affected areas.

Telemann Communications Co. Ltd., located in Tokyo, is a Factory Authorized Reseller for C-COM Satellite Systems Inc. Telemann’s client, Softbank Mobile Corp., the third largest cellular provider in Japan, was working feverishly to replace the area’s disabled cellular network. Softbank, a corporate entity with a strong sense of civic duty, embarked on the epic task of restoring missing, destroyed and inoperable cell towers. The temporary structures they employed were able to provide continued communications coverage for the survivors of this monumental catastrophe.

A report by Atul Roach on March 23rd, 2011, at 9:28 a.m., reported that “NTT DoCoMo 2,130 mobile base stations were still out of service, as compared to the 6,720 which were inoperative immediately after the quake. Likewise, KDDI had 1,500 non-functioning base stations, down from 3,800, while Softbank reduced its inoperative base stations from 3,786 to 1,157. It seems that Japan is recovering faster than expectations in the telecom sector which is important to keep people connected in such difficult times.”

Problem Permutations
Softbank developed a platform that consisted of a fixed satellite antenna, a cellular antenna, a cellular switch, and a power supply. This structure provided an excellent, quick-to-deploy solution to a very serious problem. Once the units are deployed, they provided cellular service in specific geographic areas. 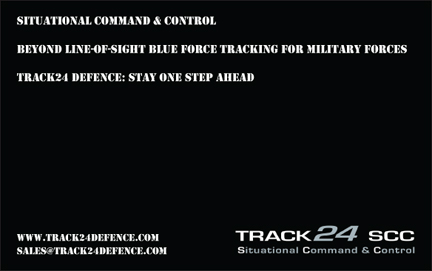 The satellite antenna and attached satellite modem provided the necessary link to backhaul the calls to a wired network located elsewhere. Each unit required approximately six hours to deploy, once the team arrived at a site. These platforms provided immediate relief to the people who had been left without communication for days after the earthquake and ensuing tsunami.

Even more of a challenge for the Softbank team were the aftershocks. Hundreds of them were generated in the days following the initial quake, some stronger than “strong” earthquakes that have been experienced in other parts of the world.

These persistent aftershocks foiled an otherwise excellent solution. For the accurate operation of the link from these remotely located cellular stations, a fixed satellite antenna requires pointing accuracy be maintained at all times.

With each aftershock, many of the platforms would inevitably stop working due to incurring pointing issues. The efforts of the Softbank team to provide cellular service to the people who so desperately needed it were, unfortunately, being wasted.

Attempts To Resolve
The solution to the aftershocks seemed simple: Send a team to re-point each failed system. The logistical nightmare that was created by this solution is now easy to understand: Each re-point would take a minimum of two hours—emergency teams would need to constantly change gears from deployment into re-point mode. The teams would be taking one step forward, two steps backwards. 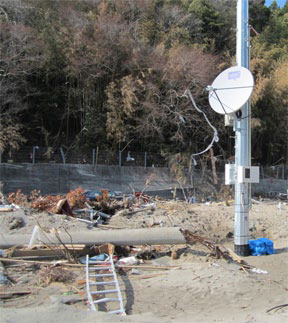 On April 7th, a 7.2-magnitude aftershock occurred, leaving 700 0.98m satellite antennas and 50 1.2m antennas inoperable due to pointing issues. A visit by the Softbank team was required to return the units to operational status. Such work required a minimum of two hours of work per site, with a total time to correct the situation amounting to more than 1,500 hours, plus the driving time required to arrive at each site.

Assuming a drive time of one hour per site, the total time required to fix the antennas equalled 2,250 hours of work—that’s the equivalent of 94 days of around-the-clock work.

A Most Viable Solution
Telemann Communications knew of the C-COM built iNetVu® mobile satellite antenna solutions and believed such equipment could provide the needed technological edge to deal the communication difficulties resultant of the aftershocks. Softbank already had a number of iNetVu antennas deployed on vehicles that were used for temporary cellular sites at special events and to backup a fixed site that was down for maintenance.

Softbank, having faith in the solution presented by Telemann Communications, ordered 110 iNetVu systems, of which 55 were iNetVu 1200 systems and 55 were iNetVu 980 systems. Of course, the need for the systems was far beyond urgent—time was of the essence to return vital communications to the people in the affected areas.

C-COM’s normal delivery procedure included the testing of each system on satellite prior to shipment. The time required to accomplish these tests on 110 systems was deemed problematic—the decision was made to ship the units directly from C-COM’s warehouse direct to Japan and to send two C-COM employees to test the units, on-site, prior to their deployment.

Softbank’s and Telemann’s staging areas were located in Sendai, one the areas hardest hit by the tsunami. While this area was far from stable at the time of the shipment, it was judged to be the most effective and convenient location to initiate the testing and deployment process. 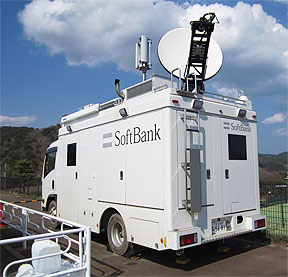 The initial 15 systems were in the Softbank warehouse when the C-COM employees arrived, and the work began to prepare the systems for deployment.

Quiet Satellite
The first hurdle that had to be addressed was related to the IPStar 3200 modem. This modem lacks the ability to communicate to an external device using any of the standard modem protocols. This modem is ideal for a fixed solution, but proved to be a challenge for mobile implementation.

The next choice would be to use a method called RF. In this method, the Controller talks to the modem to acquire the information to make a positive identification of the target satellite. As the IPStar 3200 modem does not have any native language interface, this method was also unavailable.

Another option for locating the satellite was to use the satellite Beacon signal. While this method would have worked quite well, it would have added thousands of dollars of expense to each unit deployed. In an effort to keep costs down, this method was considered as a viable option only as a final solution.

The iNetVu Controller offered another method of satellite acquisition: Reference Satellite. In this method, a reference satellite is found using DVB, RF or Beacon. In the existing case, DVB was the selected method. This allowed the platform to first locate and peak on the reference satellite, and to then move to the target satellite, making the necessary three-axis adjustment. This method can be ‘hit-or- miss,’ as the target satellite is pointed at blindly with no validation available to confirm acquisition.

As this technique made the best price/performance choice, the C-COM software engineers had to make some modifications to the algorithm to ensure absolute accuracy. To prove this method was stable, hundreds of deployments were completed over multiple days, and the ES/NO values were recorded. In all but one case, the value was within a very high range that was considered acceptable. 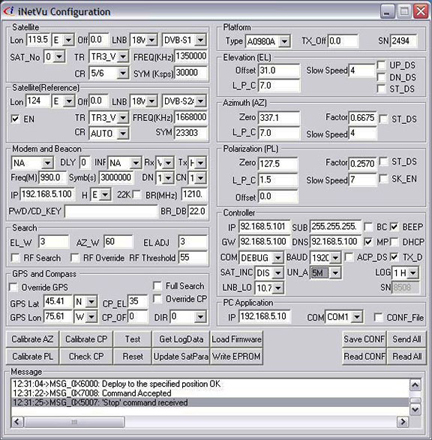 The acceptable range selected was a value of 11, and the absolute highest value seen was 13.6. In the one failed case, the value seen was 3.4, and at that level, the system did an automatic re-point due to a connection failure.

Aftershock
During the two weeks that C-COM employees were on-site, more than 40 aftershocks were felt, some large (7.6 magnitude) and some small (4.0 magnitude). It was obvious that a failsafe method needed to be developed that would put the antenna into automatic re-point mode if the aftershock knocked it off the satellite. The table on the next page represents the earthquakes recorded in the area during C-COM’s employees’ visit.

In a normal situation the iNetVu Controller already contained an algorithm to keep the antenna pointed correctly, if selected by the user. As mentioned, the IPStar 3200 modem does not have a native language embedded, and so communication with it was not possible. As the Target Satellite has no DVB signals available, the re-peak algorithm with that option was not possible.

On-site C-COM’s personnel turned to their software engineers and requested a special new algorithm that would address the issue at hand. New software was coded overnight, sent from C-COM’s Ottawa offices, and field-tested more than 50 times.

This new software allowed the antenna to automatically perform a re-peak if it detected that the target satellite was no longer being pointed to within an acceptable degree of accuracy. The success of this new algorithm provided Softbank with the confidence that the units would not require a re-point each time a major aftershock occurred. 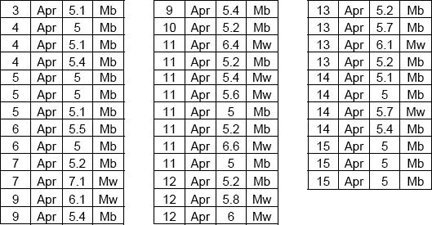 Power Outage
C-COM field personnel conceived another situation that could cause the system to become inoperative. What if a power outage was to occur, followed by an aftershock which knocked the unit off satellite?

When the controller repowered, it would be unable to detect any problems, given the way the satellite was located, and would not know to initiate a re-point sequence. This situation was not improbable as many of the systems were powered by gasoline generators.

Doing a re-point at all power-on situations was a possible solution, but this could also create a different set of problems. As the systems are being used to backhaul a cellular network, if they are automatically put into re-point mode during repowering, this would cause all ‘calls-in–progress’ to be dropped, and the system would be unavailable for some minutes. It is far better to only initiate a re-point when the units have actually lost their pointing accuracy on the target satellite.

A solution to this situation had to be developed. The C-COM software engineers were put to the test again with another request and an algorithm was developed within a few hours and new software was sent for field testing. The solution worked flawlessly and was tested a number of times with different controllers and antennas.

Now, even in a worst case scenario of a power outage followed by a major aftershock, Softbank was assured that the iNetVu systems would perform their task with no human intervention. 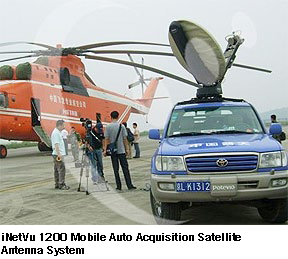 The Implementation
Initially, Softbank had been busy building additional trucks equipped with the iNetVu 1200 mobile satellite antenna system. These vehicles were to be deployed to disaster areas to provide temporary cellular service to assist with the cleanup efforts. The deployment of the iNetVu 980 units occurred on a case-by-case basis, as Softbank saw fit, based on the need to provide cellular coverage into additional areas affected by the disaster.

Additional orders were placed to C-COM for more iNetVu 1200 and 980 units.

Summary
The client had to have mobile satellite communications, and the type of deployment required presented a number of unique challenges for the mobile satellite controller used. C-COM personnel have worked with many of their resellers around the world to solve these types of technical issues in a timely and professional manner.