The French have a tradition that is, depending on your point of view, either charming or sexist. They personify the French state—in particular its ideals of “Liberté, Egalité, Fraternité”—in the form of a woman. 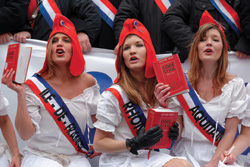 Known as Marianne, she was born in the Revolution, where Eugène Delacroix depicted her in his famous painting, Liberty Leading the People. She was thereafter re-imagined every decade or so: in the 1960s, such international beauties as Brigitte Bardot and Catherine Deneuve were her inspiration.

In July of last year, Inna Shevchenko became the new Marianne on French stamps. She was the highest-profile member of a Ukrainian feminist protest group, FEMEN, to whom France had granted political asylum.

Who Stands For The Industry?
To be honest, The Faces of Satellite started as a cute idea to be this year’s theme for our annual fundraiser, which occurs on the opening night of SATELLITE 2014. However, the more we worked on the theme, the more it developed a serious side, starting with this question:

Who stands for the industry in our collective mind?

Are The Faces of Satellite the CEOs who appear on magazine covers and on the stage at SATELLITE? Is this Face the genius innovators of the past and present who make great leaps in technology and systems? Is the Face the new class of investors who have entered the business over the past decade and substantially changed how it operates?

You could make a good case for any or all of these identifiers. However, at SSPI, we think the Faces of Satellite are different. We think they are not necessarily the movers-and-shakers who appear in the headlines, though one or two of them might well be... they are not all destined to win awards or appear in “most influential” lists, though some may.

We believe the real Faces of Satellite are individuals, known and unknown, who are shaping the industry’s present and future. They are people you know, people who truly make a difference.

They are engineers and programmers, salespeople and market researchers, senior executives and university professors. Their personalities, persistence, vision and sense of mission are contributing in small but extremely important ways to the industry’s success. They are people the industry would not wish to be without.

We also believe the time has come for these professionals to have their moment in the spotlight. At Gala 2014 on March 11, we will unveil the first dozen Faces of Satellite in our program and on the big screens in the ballroom.

Who will they be? They will be vendors and customers, male and female, and they will come in all of the shades of humanity. They will be from Asia and Europe, Africa and the Middle East, North and Latin America—some you will know and some will be people you have not yet met—they are your industry.

The Gala is only the start for the Faces of Satellite. We will continue in the coming months to showcase the famous and the not-yet-famous individuals who make our industry what it is. You can take part by recommending a colleague for inclusion in the Faces of the future.

Fun—With A Serious Purpose
The Faces of Satellite is a bit of fun that also has a serious purpose. Like all technology businesses, our industry is engaged in what McKinsey has called a global war for talent. What we do is a lot harder than what Google and Facebook do, and our need for talent crosses a much broader range of skills.

When we celebrate those skills—when we recognize the countless achievements large and small that drive the industry forward—we are making our business more attractive to talented people.

The same is true of our Industry Innovators Awards, which SSPI will also present at the Gala to for-profit and nonprofit organizations, as well as the Stellar Awards for Government Service. Awards are fun—but they are serious business as well.

I hope you will celebrate with us at the Gala, the Satellite Nation’s biggest networking event and SSPI’s biggest fundraiser. To attend the Gala is now easier than ever as we are making available—for the first time—a reception-only ticket. For those with other dinner plans, this allows you to network with colleagues and entertain customers during the big Champagne Reception, where the entire industry gathers.

For SSPI, the Gala fundraising makes possible the many other educational and capacity-building programs offered to the industry, as well as providing our supporters with a great evening of business entertainment. However, whether or not you attend SATELLITE or the Gala, keep an eye out for the Faces of Satellite. One of them might just be your own!

About the author
Robert Bell serves as the Executive Director of the Society of Satellite Professionals International (SSPI), where he is responsible for the programs, finances and operations of the organization. He can be reached at rbell@sspi.org. 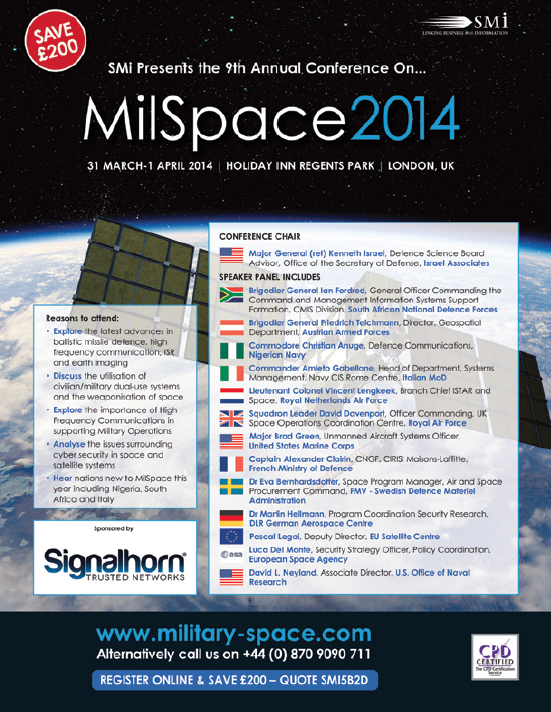