Mobility for SATCOM users in a Military or Government Agency application context has always been a hot topic. 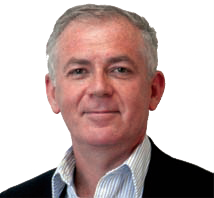 The ability to maintain a satellite link while on the move, or to quickly deploy teams in the field that can easily and reliably establish communication anywhere in the world, have imposed many challenges on designers and system architects.

This, by itself, adds a new class of users and potential applications to the traditional Fixed SATCOM market and solidifies the unique position of satellite based communication in the overall global Military Communication offering. 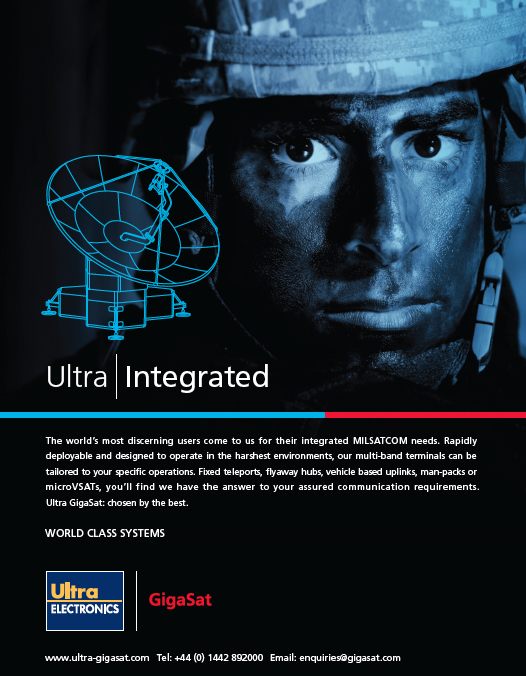 At this stage, the identification and definition of the various classes of mobile users is important to present.

1.    By far the most attractive application, and the most challenging, would be the one identified as SATCOM-On-The-Move (SOTM). By deploying this technology, the users will be able to close a satellite link while moving either with a ground vehicle, or in an aircraft. Maritime applications would also be part of the same group.

2.    A second group of users would be those who require fast deployment, and do not have the option of traveling with a vehicle. These would be users that would hand carry portable satellite terminals, man packs, or even flyaway, with extremely fast deployment time, and ability to log almost instantaneously into a satellite network. In a real world environment, one can envision the close interaction between these two classes of users, and to a point, their similarity. 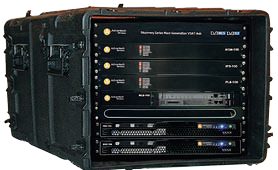 The designer challenges are multiple;

• Mobile users will need to switch satellites, gateways or beams. This requires sophisticated algorithms at the gateway and at each remote.
• Bandwidth management has to be done in a very intelligent way, in order to avoid cost overruns. In the last 10 years, military conflicts in Iraq and Afghanistan have identified Satellite Bandwidth as a major cost factor. Without proper planning, bandwidth costs can easily grow exponentially, or worse, bandwidth shortage can occur with the collapse of entire communication networks.
• Trying to estimate or “guess” today the bandwidth needs of the future users is close to impossible, and proved to be really damaging from both the technical and financial point of view. Many networks have been deployed as SCPC dedicated high capacity links, to be used only a fraction of the time, in a very inefficient and costly way. Other networks have been estimated as pure TDMA networks, burst mode, low traffic, to be later declared unusable as soon as the traffic requirement is growing.

With this in mind, today’s users are demanding flexible network architectures where the same terminal can be used as a pure SCPC terminal, for high QoS, high data rate applications, or as a high bandwidth efficiency TDMA terminal, for lower data rates applications.

This will guarantee, by design, the most efficient way of using bandwidth and will release the system planners from the burden of deciding on which technology to select;

• Size and efficiency is important, if not critical. SOTM terminals, man packs, flyaway terminals have to be light weight, small size, and low energy consumption. This is a key criteria for true mobility.
• Network agnostic. Mobile users should be able to log into multiple satellites, multiple gateways, and switch them as required. They need to share the gateway and all resources with fixed users, and have interoperability capabilities. Open standards are in this case preferred, as DVB-RCS, while proprietary networks are at evident disadvantage.

The proposed Advantech Wireless solution addresses, in a pragmatic way, the aforementioned challenges.

A. The Compact Transportable Next Generation RAPTOR Hub

The network architecture is based around the RAPTOR hub, with ASAT-IITM® (Adaptive Satellite Access Technology) capabilities.

The RAPTOR Hub is a ruggedized, military grade, advanced multiple access wave form Hub, currently operating under the WGS constellation of satellites. It incorporates key technologies that allow this Hub to be at the heart of a typical SOTM network. Among them, the most important ones are: 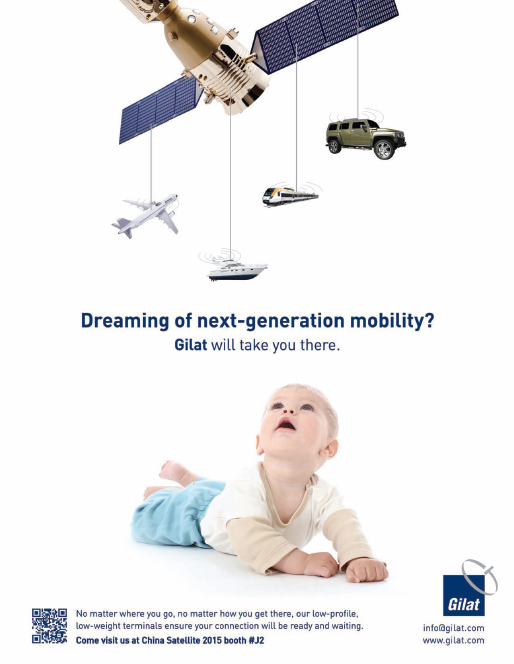 • The only Hub in the world with built in triple access mode (ASAT-II™). The Hub can operate as a STAR/MESH SCPC hub, TDMA hub, or Burst Mode FDMA hub. Each remote can switch from any access mode to any access mode, without user intervention, just by analyzing traffic profile and data requirements. Each remote can become a very high data rate SCPC terminal, and switch to different classes of burst mode access, when traffic profile is changing. This allows maximum bandwidth efficiency, and standardization among all network users, without the risk of wrongly assumed initial traffic profile. It has been demonstrated that this approach can easily reduce the bandwidth cost by 50 percent.
• The RAPTOR hub incorporates highly advanced Beam, Gateway and Satellite Handover techniques, either based on location, or on link performance.
• The hub updates its user profiles every 26 msec, this is the fastest way in the industry, and extremely important when the same user can completely change its access profile, or it has to do network beam or gateway/satellite handover 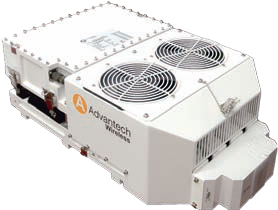 • The Hub is always hardware ready to its maximum capacity. No hardware cards or hardware upgrades have to be installed in the field, when users are added. No extra hardware inventory, prepaid, has to be kept in stock. More carriers can be added instantaneously. Everything is being upgraded via software keys, which is a major improvement over all existing hubs in the field. The necessity to dispatch teams in the field to upgrade hubs with hardware, in a war environment, with long delays and incertitude, is therefore removed now.

B. The Remote Terminal

At the remote site, the main modem technology is included in the Advantech Wireless S6000 series. This powerful modem line, incorporates the ASAT-II™ technology, and the Beam, Gateway, satellite Handover intelligence, all in a DVB-RCS/DVB-S2 standard environment.

In several applications, the modem is ruggedized, outdoor type, for increased resilience in challenging environmental applications.

Starting with 2010, Advantech Wireless has launched a new line of extremely powerful GaN based SSPAs. These units exceed in RF power, linearity, and efficiency of any existing technology, either solid state, or TWT based. The GaN technology allows us a dual approach:

• We can now build extremely powerful SSPAs for the gateways, to work in full integration with the RAPTOR Hub. Systems over 6 KW power levels in X-band were delivered and are in operation worldwide today. This huge amount of power enables the very large amount of data traffic that Military SATCOM networks require. These systems can be mounted outdoors, with full built- in redundancy, or indoors. In this context, a powerful teleport can be built in a transportable trailer, enabling mobility even at a large command centers level.
• We can now build extremely small power amplifiers, which are the key for SOTM, manpack SATCOM, and FlyAway. Up until now, this would not be possible with any existing technology.
• Using GaN, a new generation of SOTM terminals was released, designed to work in extremely harsh environments, as defined by Mil Std 810F. These units can handle a wide operating temperature range, high levels of shock and vibration, as well as perform with very high linearity and efficiency. These units are currently operating in the WGS environment.

Below is a list of several Gan-based SSPAs, specifically designed for mobile applications, including SOTM: 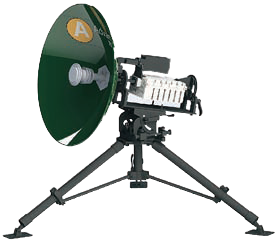 If we extend the term “Mobility” to applications others than SOTM, the obvious candidates would be all terminals that allow fast deployment, and geographical location changes.

These terminals require mobility, and the same access techniques and bandwidth sharing as the SOTM terminals.

In this context, it is worthwhile mentioning the Advantech Wireless 65cm ManPack solution, which includes X-Band, Ku-Band, or Ka-Band antenna reflectors and feed, the corresponding GaN BUCs, and the ASAT-IITM triple access mode series modems. Integrated together, this is an ideal solution for intervention teams which do not have the option of traveling by a vehicle. The 65cm terminal is fully independent, with battery and battery chargers, including solar panels. 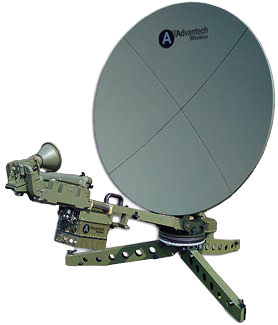 In the second case, the Advantech Wireless 1.2m X-Band, Ku-Band, or Ka-Band FlyAway terminals, allow much higher data rates, and it is ideal for remote command centers. Equipped with the same GaN based RF line of BUCs, ASAT modems, and antenna controller, the terminal includes IP routers, a complete set of test equipment, and location finding equipment, battery and chargers, all in ruggedized military grade transportable cases.

In a real war scenario, a typical network architecture will, in this case, be based on one or several RAPTOR hubs, deploying several true SOTM terminals either on vehicle, aircraft, or navy, combined with mobility at soldier level via man packs, and at local command level via flyaways, or fixed terminals.

The major advantage would be in standardization of all of the above terminals, and the ability to manage bandwidth resources in a truly efficient way, by switching access techniques without any user intervention in the field, covering multiple hubs, and multiple satellites.

The RAPTOR hub and its associated remote terminals, is therefore in our opinion, ideally positioned to define the future network architecture for Military SATCOM applications.
www.advantechwireless.com/ 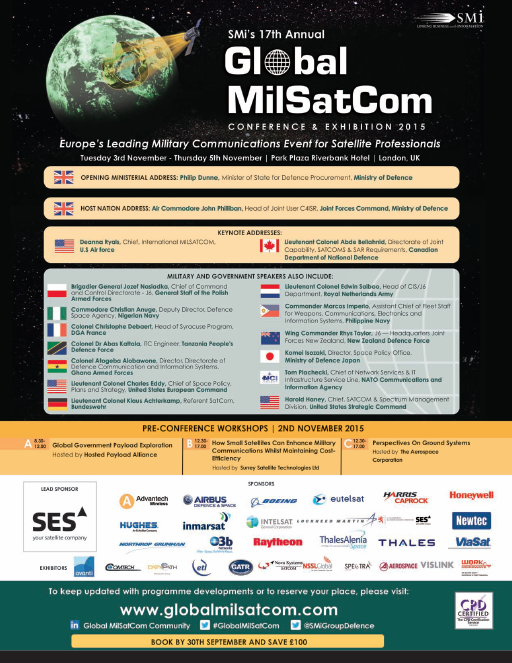