It’s ever important in today’s environment for the military to have reliable and secure communications to ensure mission success wherever they operate. In fact, the armed forces have been working on variations of airborne satellite communications’ (SATCOM) capability for more than 15 years. Still today, the challenges to provide integrated communications on a C-130 aircraft are complicated and costly.

Secondly, modifying an entire fleet of aircraft is a major budget driver, especially with such a large fleet of C-130 aircraft. It can cost $1.5 million to $2 million per C-130 plane to modify and install airborne SATCOM systems. Obviously, there needs to be a better way. 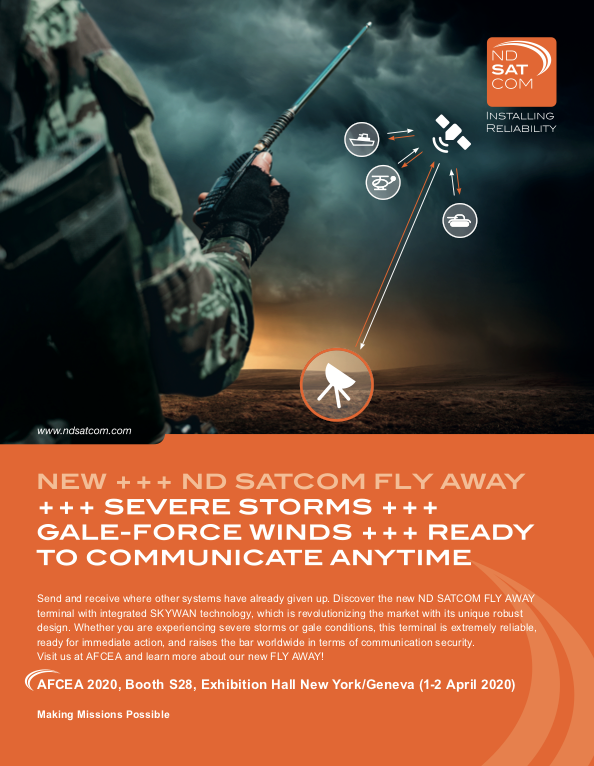 To support the military’s need for quick, reliable, secure and cost-effective military satellite communications for C-130 aircraft, a commercial off-the-shelf (COTS) solution was reviewed for its flight worthiness and viability.

COTS Advantages
COTS offers multiple benefits to meet the warfighter’s needs. The fact that the best implementations and strongest technologies have been chosen not by an RFP review committee, but by the invisible hand of the market, guarantees the military works with vendors who have the best solutions that have been vetted by the commercial market.

This overlap gives the Department of Defense (DoD) an excellent opportunity to leverage COTS products. Leveraging COTS equipment also breaks the cycle of development and change order cost overruns.A communication system based on COTS equipment has a much more deterministic budget.

The costs of a COTS-deployed solution are more predictable, and the total cost of ownership will be much lower with COTS equipment. The main reason is that instead of technology development costs being shouldered exclusively by the DoD, development is amortized across countless commercial customers.

TRASC’s unique 18-inch parabolic antenna is the only dual-band antenna that can support both military and commercial Ka frequencies. TRASC works with various Ka, Ku, X-band or a combination of these to support voice and data for C-130 airborne applications.

TRASC is fully FAA-compliant, works on all C-130 variants and is compatible with existing iDirectGov hub-based SATCOM networks.

The multi-purpose hatch TRASC system provides the customer the ability to immediately field a system. It also provides an operational capability without the long delays associated with the normal acquisition and implementation process.

In addition, the airborne SATCOM system can be removed from the aircraft when it needs to be serviced without grounding the aircraft or causing any integral damage. These aspects are significant improvements over a permanent modification.

Not only is the military able to field a new capability, they also benefit in always having the latest in technology as well as lower acquisition costs due to not needing to permanently modify every aircraft in the fleet. The TRASC solution enables the military to only install the system where it is needed, which reduces the total number of systems the military needs to accomplish its mission.

Results
The military can reconfigure the aircraft for SATCOM equipment without redesigning the aircraft, resulting in a fast time to use for the warfighter and cost-effectiveness.

Because the entire airborne communications solution is a self-contained RO/RO solution, the military can transport the system between aircraft. This means that using TRASC changes the operational environment of transport aircraft by enabling the warfighter to have information connectivity en-route and not be dependent on only a few aircraft that may have a wideband SATCOM capability.

In-flight testing while streaming high-definition video from the aircraft was demonstrated and proved the ability to deliver a high throughput and transportable communications-on-the-move (COTM) SATCOM solution. There is no degradation in the aircraft’s mission capability by installing the TRASC system.

Early results provide the warfighter with more options than legacy systems currently provide. The multiple-band TRASC solution enables the warfighter to compete for satellite services so that the military can obtain the best value service to meet mission needs.

In the past, warfighters were relegated to only one SATCOM service and had to pay whatever that contract rate was at the time of service. They had no other options as their previous system solution was a dedicated solution to one service provider.

Intelligence, Surveillance and Reconnaissance (ISR) on non-traditional ISR platforms such as the C-130.

To demonstrate its airborne modem’s capability, iDirectGov performed an in-flight test while streaming high-definition video from an aircraft to prove the ability to deliver a high-throughput and transportable Comms-On-The- Move (COTM) SATCOM solution.

As TRASC is a newly developed airborne communications system, R4 has started delivering the first 10 systems to customers in 2019. There are additional orders for 50 more TRASC systems in 2020.

In conclusion, when the military needs communications technology to perform a mission, it becomes a costly and time-consuming endeavor to start from scratch to build a solution.

The TRASC COTS solution — and the partnership with best-in-class providers-enables the DoD to speed up time-to-market and reduce development costs all while meeting mission requirements.

Because the military measures success in terms of how fast it can field a new technology and provide capability down range to the warfighter, TRASC changes the game for the military and its C-130 fleet of aircraft. TRASC enables the warfighter to become immediately effective without having to wait years for the technology to make its way through the fleet through upgrades.

Karl Fuchs is the Senior Vice President of Technology at iDirectGov. Fuchs leads iDirectGov’s team of federal systems engineers and serves as chief architect for new product integration. Fuchs has more than 20 years of experience in the areas of technology and the federal government and is a Senior Contributor to MilsatMagazine.