Communications On The Move (COTM) continues to be a vital technology to help the warfighter achieve mission success. Broadband Internet Protocol (IP) connectivity in a mobile environment on the ground, at sea, and in the air, provides instant access to information, which is paramount to military organizations for reconnaissance, situational awareness and critical communications needs.

By providing real-time, secure and reliable video, data, and voice transmission via satellite for warfighters and military support organizations, satellite communications enables military groups to carry out important national security missions in areas that lack supporting communications infrastructure. Satellite COTM routers are ideal for battlefield ISR missions as they require limited setup time; and are ready for rapid deployment in any theater of operations around the world. Satellite COTM routers are extremely compact and scaled to fit in a soldier’s pack. Additionally, COTM remote routers designed for military applications are ruggedized for continual operations in adverse conditions and when soldiers are on the move. COTM enabled satellite networks allow COTM routers and itinerant terminals to operate seamlessly around the world. 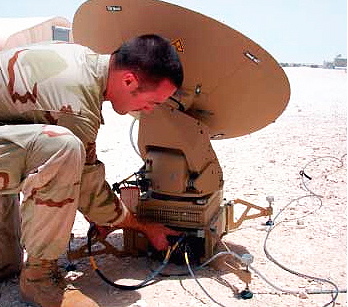 Airborne Acquisition
The greatest developments in COTM technology are taking place in terms of airborne communications.

The need for high-definition (HD) video from mobile military aircraft communications has long been a requirement for Intelligence Surveillance and Reconnaissance (ISR). In the past, achieving this goal has been difficult due to the requirement for very high in-bound data rates through ultra small antennas. Further complicating ISR is the use of high-speed aircraft which introduces the Doppler Effect, where high speeds, turbulence and rapid shifts in altitude create problems in receiving satellite signals.

Recent developments in airborne COTM, however, are making reliable HD video a reality for critical airborne communications. Airborne COTM can be just as reliable as ground-based COTM with the use of specialized wave forms that support increased vehicle speeds. By using automatic beam switching and persistent IP addressing for airborne communications, an aircraft can be flown from the United States to Europe and on to a final destination in Southwest Asia and maintain a seamless global network of advanced communications while switching satellites throughout its journey. This network even extends to soldiers departing the aircraft with communications-equipped manpacks that include mobile satellite router boards. Paratroopers can quickly and easily set up communications on the ground to suit any mission.

The stringent security requirements of the military are particularly challenging in SATCOM because of the broadcast nature of the medium. Recent upgrades in Transmission Security (TRANSEC) include the ability to obfuscate any traffic volume or remote terminal acquisition activity, which either on its own, or when coupled with other intelligence information, may prove useful to an adversary. 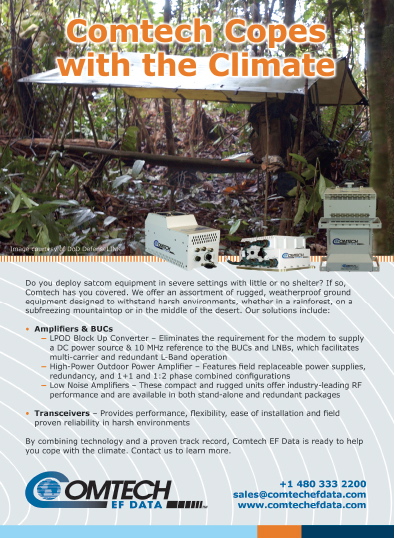 To address these critical issues, iGT has developed a unique acquisition algorithm as part of their TRANSEC offering. Airborne COTM that supports high-definition video communications continues to evolve and be tested to meet the most stringent military standards. An important demonstration of enhanced mobility via COTM occurred earlier this year. 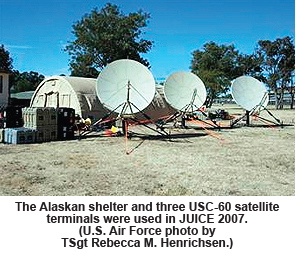 The purpose of the VTC sessions was to advise JUICE C2 that the CWID unit was ready to deploy and begin its observation run of the local area. Once Fort Monmouth was notified and the CWID mission was acknowledged, the VTC session was dropped and periodically reestablished in five-minute and 10-minute increments.

Another test scenario involved U.S. Army Special Operations Command Paratroopers from the 112th Signal Battalion (Airborne) who were scheduled to parachute from an Air Force C-130 aircraft into a Fort Bragg, NC, training area. The paratroopers were to be equipped with an iDirect iConnex e850mp SATCOM modem embedded in a Ku-band micro-terminal. Once on the ground, the plan was for the paratroopers to set up a live, Everything over IP (EoIP) video teleconference session with an Army vehicle traveling in Fort Monmouth, New Jersey, over the JUICE 2010 Time Division Multiple Access (TDMA) SATCOM Non-classified Internet Protocol Network (NIPRNet).

A scheduled Fort Bragg parachute jump from the C-130 was preempted at the last minute. As an alternate plan, the jump package was trucked over to the landing zone and unpackaged as though it had been dropped. The Special Operations Command unit successfully deployed the EoIP communications system, which performed with the network and joined in the Satellite VTC bridge sessions with JUICE C2 and the SATCOM-on-the-move vehicles at Fort Monmouth and CWID Dahlgren, Virginia.

After the 112th Airborne forward-operating unit joined the satellite network, it participated in regular VTC bridge sessions with JUICE C2 and the Ft. Monmouth and Dahlgren COTM vehicles. They reported on their mission’s observations of the area and the environmental conditions encountered.

JUICE provided an excellent opportunity to evaluate the latest advances in military communications technology. These advances offer greater efficiency, increased mobility and lighter, more ruggedized technologies that will improve the safety and agility of our troops in combat situations. 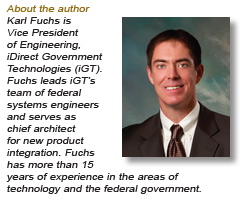 The JUICE demonstrations particularly show that COTM is greatly enhancing mobility for the warfighter on the ground and in the air. COTM improvements will continue in the future and should include greater connectivity, bandwidth, speed, reliability and availability. In addition, improvements in TRANSEC technology will help ensure that transmissions are safe and secure. These upgrades will make increased mobility a reality and lead to even more safe and successful missions.