Quantum communications has been making headlines lately, with a lot of breathless announcements about the capability for delivering truly incredible levels of security based on the laws of quantum physics.

However, without a Ph.D. in quantum physics, it is difficult to sort out the science from the science fiction. The purpose of this article is to provide a primer on quantum communications geared toward the reader who wants to understand the current state of the technology and its practical application.

Why Quantum Communications?
If two parties (let’s call them Alice and Bob) want to exchange a sensitive message over a long distance, it is commonly accepted that this message can be intercepted by an unwanted party (let’s call them Eve, short for eavesdropper).

All current communications networks are known to be susceptible to covert interception, whether it is undersea cables, cellular networks, terrestrial fiber optic or coaxial cables, or satellite communications via RF or optical links. That is, all but one: quantum communications.

When Alice and Bob communicate via a quantum channel, any attempt at interception by Eve is known by both parties. While quantum communications does not necessarily thwart Eve, it does provide knowledge that Eve is present and the message has been compromised. This provides an unprecedented level of security. However, this technology is still in a an early demonstration phase, with truly practical systems possible within the next two years.

Consider a typical free-space optical communications system available today, where a string of bits are modulated at a 10 Gbps data rate on a 1550 nm wavelength laser with 1 watt output power. At a constant output, this laser will produce roughly 7.8 x 1018 photons per second streaming from the satellite to the communication point on the ground. A successful data link is achieved when enough photons reach the detector at the end of a ground telescope to achieve a coherent link.

The quantum payload typically produces a much lower photon output (typically in the millions of photons per second) with much lower data rates. At a very basic level, the quantum property of each photon is prepared by Alice (the sender) and measured by Bob (the receiver). If Eve observes the photon instead of Bob, the quantum properties of the photon are irreparably changed, and Alice and Bob can verify this with a check. This is a vast oversimplification, of course; more detailed understanding requires a refresher course in quantum physics.

Quantum Physics and the Birth of Quantum Communications
Quantum mechanics affect all objects, large and small, but its effects are most noticeable in small particles, such as photons (the basic element of light), neutrons, protons, atoms and molecules.

What makes quantum physics such a difficult topic to comprehend is that the behavior of small particles is impossible to directly observe and counter-intuitive from our understanding of classical physics. The scientists that pioneered our understanding of quantum mechanics over the last century — Einstein, Heisenberg, Schrödinger, Bohr — had to base their theories on experiments and complex equations. However, their work led to these central tenets of quantum mechanics:

• Wave-particle duality: Photons exhibit both wave- and particle-like behavior.
• Quanta: Each photon has a discrete amount of energy, a quanta, that is a function of its wavelength.
• Uncertainty principle: The exact position and the exact momentum of a photon can never be simultaneously measured due to the wave-particle duality.
• No-cloning theorem: It is impossible to create an identical copy of an arbitrary unknown quantum state, which ensures that quantum information cannot be exactly copied.
• Entanglement: Under some conditions, groups of photons can be generated such that their properties are correlated beyond what is possible in classical physics. We refer to these “beyond-classical” correlations as “entanglement.”

These basic laws opened the door to a wide range of quantum research with the realization that quantum properties were a resource to be exploited. This lead to the concept of quantum computation, secure quantum communications and quantum metrology.

The best known Prepare-and-Measure protocol is BB84 (after the paper written by Charles Bennett and Gilles Brassard in 1984), which relies on the uncertainty principle and the quantum no-cloning theorem. The transmitting party, Alice, encodes random bits through the polarization of individual photons. Bob receives these photons, measures the polarization states, and, after protocol checks with Alice, verifies they both have the same unique, random, secure string of bits. Eve may intercept the photons and try to extract the information, but only Alice and Bob know the correct polarization to measure, any attempt by Eve introduces detectable disturbances.

Entanglement-based protocols (such as E91, named after the 1991 Artur Ekert paper) takes advantage of quantum entanglement. Pairs of entangled photons are created and sent to Alice and Bob, who measure their correlated properties. If Eve intercepts one of the pairs, the entanglement is broken, introducing errors and making Eve’s presence detectable. 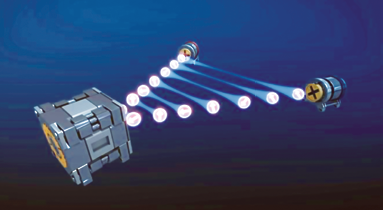 In contrast to Prepare-and-Measure schemes, entanglement does not require encoding states into the photons. Instead, both parties share a source of maximally entangled photon pairs, which is a truly random process. The distribution of entangled photons necessary for this process is also the foundation for a truly quantum network.

Shared entanglement is a basic resource for tasks such as quantum teleportation, quantum metrology and other applications of what could loosely be called the quantum internet. These applications aren’t necessarily practical today but are interesting to the futurologist.

• Randomness – quantum communications can only create random strings of bits between the two parties, Alice and Bob. A pre-defined string of bits cannot be transmitted over a quantum channel, at least according to existing protocols.
• Low data rate – current quantum communication systems are only capable of low data rates today, in the neighborhood of kbps.
• Very secure – the strings of bits are not actually transmitted, per se, but created as part of the quantum communications process. This is more secure than existing systems where messages are delivered across the open network, making it susceptible to interception.

Because of these features, the most obvious application for quantum communications is the distribution of symmetric encryption keys, known as quantum key distribution (QKD). This allows for the distribution of secure shared randomness. One application is extremely secure keys that can then be used to seed other encryption mechanisms or directly to completely protect extremely sensitive information. Depending on the application, QKD can either augment or substitute high value secure networks, in which case the additional protocols require additional scrutiny from the cybersecurity community.

Quantum communications has also been considered for satellite command/telemetry and blockchain applications. However, it is safe to say that the parallel development of the technology and its application will continue to open more doors. 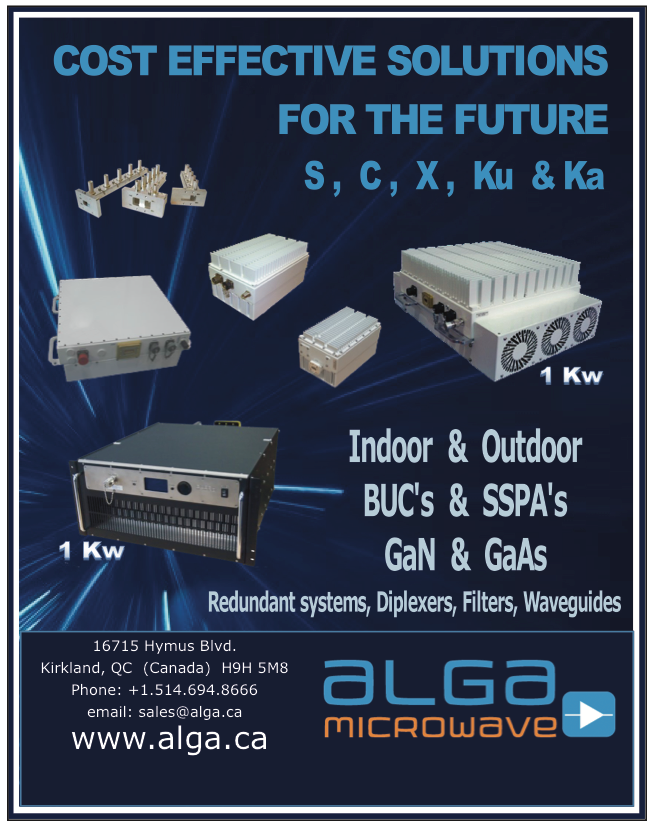 Current State-of-the-Art in Quantum Communications
Since the publication of the BB84 and E91 papers, scientists have successfully conducted numerous quantum communications demonstrations over fiber optics and through free-space both in lab conditions and in the field over existing fiber networks or with ad-hoc free-space optical communications.

The most advanced area of development today has been quantum communications over fiber optics using weak coherent pulse. Due to the attenuation in the glass, quantum links have been established between two nodes within short distances (less than 80 km.). For longer distances, quantum repeaters would need to be added. But the development continues apace by research labs and commercial companies across the world.

In contrast, space-based quantum communications provide better utility for the MILSAT community: providing secure communications to remote, hostile areas that are not served with fiber optics, or where those networks could be disrupted.

At this stage, only a few groups in the world have completed on-orbit quantum communication demonstrations.

The most advanced publicly-announced demonstration came from China last year. The Quantum Experiments at Space Scale (QUESS) proof-of-concept mission was launched on the Micius satellite in August 2016, where three key milestones were announced:

Prior to his current role as Chief Operating Officer at S15 Space Systems, David has more than 20 years of space experience at BridgeSat, Hughes Space and Communications, Orbital ATK and SSL. David has a BS degree in Aeronautical Engineering from Cal Poly SLO, a MS degree in Aeronautics and Astronautics from Stanford University, and an MBA from the MIT Sloan School of Management. 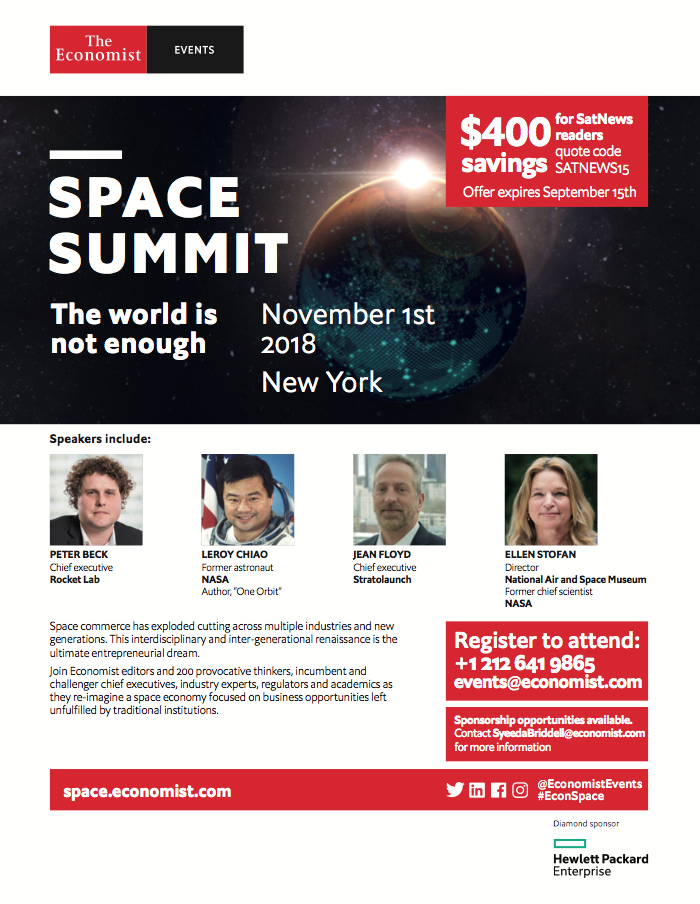