Mission Critical Audio Conferencing is typically used in applications such as: Most of the systems that are currently deployed in the field today were developed in the eighties and nineties and hence are TDM (Time Division Multiplexing)-based. 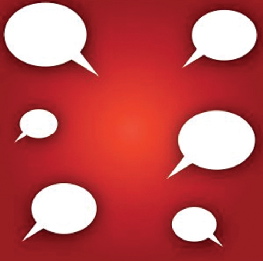 VoIP based packet networking has matured significantly over the last decade. According to several research analysts, shipments of IP PBXs have out stripped the shipments for legacy TDM PBXs. Similarly, VoIP based value-added services platforms, such as conference bridges, are also available from multiple vendors.

The net result of the new VoIP technology is to give significant CAPEX (up to 50 percent less), and OPEX savings (up to 40 percent less). The overall system is significantly more reliable and has inherent flexibility that can be engineered to customer requirements. The network also benefits from the low cost CPE that come with VoIP networks.

MONOLITHIC ARCHITECTURE
The current implementation of Mission Critical Conference Bridges is monolithic in nature. Such systems use proprietary signaling between its different sub-systems. All critical components are duplicated and sometime even triplicated to meet the five 9's availability requirement. This adds complexity and additional hardware that ultimately increases the size, power, and cost of such equipment.

TECHNOLOGY OBSOLESCENCE
The current Mission Critical Conference Bridges were developed in the 80s and 90s. The prevalent technology available to vendors at that time was mainly Time Division Multiplexing (TDM). Hence, majority of the Mission Critical Conference Bridges deployed today are built with expensive TDM-based building blocks. These products have no path forward for adding newer technologies, such as VoIP, Presence, Instant messaging, and so on.

PROPRIETARY SYSTEM
The current Mission Critical Conference Bridges also use proprietary signaling between their Keysets and the main Mission Critical Conference Bridge unit. The net result is that a customer has to buy the entire network from the same vendor, limiting innovation and requiring new feature requests to be determined by the vendor's timeline instead of an end customer's need.

MECHANICAL FAILURES ON KEYSETS
Legacy Mission Critical Conference Bridges work hand-in-hand with mechanical push button-based keysets. Due to normal wear and tear, such devices eventually suffer mechanical failures. Usually, spare seats are set up in a Network Operation Center (NOC) that can be used in case of such failures — this also adds to the overall expense.

The voice traffic from the Public Switched Telephone Network (PSTN), from remote locations (handsets connected to voice gateways/routers) and variety of SIP phones, is dual homed to both IP PBXs. 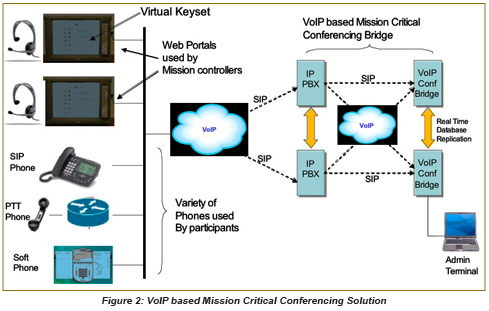 As the failed network elements are restored the traffic automatically moves back to the primary route. This network architecture is analogous to the packet based SS7 network that is used for signaling between network switches and is one of the most resilient telephony networks in the world.

THE VIRTUAL KEYSET
Figure 3 below shows a virtual Keyset. It supports a command and control web portal. It also provides a softphone that is used to call into the mission critical conference bridge. 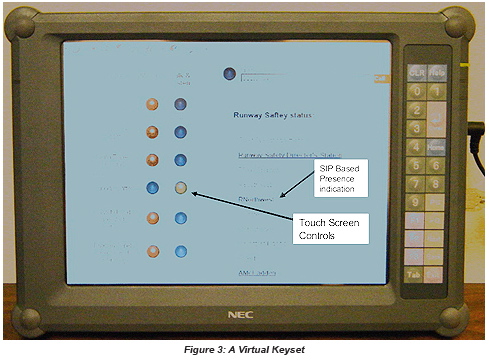 The use of a softphone coupled with the command and control portal improves the availability figures for the overall network.

The command and control portal allows the mission controllers to see participants that are associated with different rooms, those that are available to take calls based on 'presence' information and those that are actively talking based on loudest speaker algorithm. The mission controllers are also able to monitor the audio from multiple rooms simultaneously and barge in to a given room simply by touching appropriate buttons on the screen.

THE BENEFITS
There are several other benefits to the VoIP based mission critical conferencing solution.

DISTRIBUTED ARCHITECTURE — SCALABLE HIGH AVAILABILITY
With the monolithic approach, the high availability number is fixed and is a function of how redundant individual components are. With the VoIP based distributed approach, one can engineer the level of availability needed by adding multiple IP PBXs and multiple VoIP based bridges as required.

LOWER COST OF CAPEX
As the bridges use standard industrial grade hardware (with redundant PSUs, Disks and CPUs, etc.), and the operating system is Linux-based, the capital cost is significantly reduced, typically less by up to 50 percent when compared to legacy TDM solutions.

LOWER OPEX
The legacy TDM-based approach requires an organization to have dedicated leased lines between their geographically dispersed CPE devices and their TDM-based Mission Critical Conference Bridge. Sometimes these lines are extended to different parts of the world. Given the mission critical nature of the usage, these lines are usually redundant. Since events needing use of mission critical conferencing, such as a satellite launch, do not occur on daily basis, this leased line approach becomes expensive quickly.

These days, most of the organizations that require mission critical conferencing have installed their private data networks (MPLS, MetroE etc.). Inherent within such packet networks is the ability to create virtual circuits and allow such circuits to be used for alternate routing. These virtual trunks obviate the need for redundant physical trunks, as is the case with legacy approach, and that leads to significant OPEX savings.

The bridge servers use power much more efficiently when compared to the monolithic switch counterpart — power is only used when needed, instead of keeping the spare modules powered up at all times. The power estimate for the two IP PBXs and two VoIP bridges as shown in Figure 2 is approximately 1000 watts, as opposed to 5000 watts associated with the monolithic Mission Critical Conference Bridge. Reduced power also results in less cooling required to operate the equipment.

VENDOR AGNOSTIC
The network elements comprising the distributed Mission Critical Conference Bridge are standard products that are available from multiple vendors. These products follow the demand and supply cost curve that is typical of any standard product. As time progresses, this approach will yield an overall lower cost of ownership.
Also, being standard products, there is no need for any proprietary signaling between them. This helps the organization as it is not dependent on a single vendor for the entire solution.

REDUNDANT DEPLOYMENT, REMOTE OAM&P
The IP PBXs and VoIP based Conference Bridges can be located at different geographical locations, further improving the overall availability of the network. The administrative web portal of any of the servers can be accessed from any PC (with proper authentication) connected to the Internet. This provides a lot more flexibility in managing Operation, Administration, Maintenance and Provisioning (OAM&P) functions associated with the equipment, compared to the legacy approach where the Mission Critical Conference Bridge can only be managed from a co-located administrative terminal.

REMOTE TROUBLESHOOTING + NETWORK ASSURANCE TESTING
Even though the individual network elements support five 9's of availability, they need to be tested and re-tested to make certain that they are working optimally and are available when the actual need occurs. In the legacy TDM environment, test engineers make routine test calls to make sure network is operating end to end. In case of any issues, a lot of manual testing is used until the equipment is restored back into service.

PRESENCE
The VoIP network uses Session Initiation Protocol (SIP) for signaling between different network elements. This signaling format has built in processes that make use of 'presence' information. Incidentally same SIP signaling is used on Instant messengers that allow one to see if their buddy is online or not. Use of SIP allows VoIP based mission critical conference network operators to invite other operators and/or colleagues into a conference based on their 'presence' status.

PHYSICAL SIZE
Each one of the IP PBXs and the VoIP-based bridges as shown in Figure 2 are built using 1RU high servers. All four units comprising the VoIP based Mission Critical Conference Bridge can fit into a 4RU (about 7 inches) vertical shelf space. The equivalent monolithic Mission Critical Conference Bridge requires a 7 ft Telco cabinet. Therefore, the VoIP based approach provides equivalent functionality but in considerably less space.

PLAYING THE BETTER ROLE
Mission critical conferencing equipment plays an important role in situations where decisions made could affect the lives of thousands if not millions of people. It is extremely important that such equipment be always available when needed. So far, this need had been met by very expensive monolithic mission critical conference bridges that are TDM-based.

As most of the telecommunications networks are migrating from TDM to VoIP, the same holds true for the mission critical conferencing networks, as well. The VoIP solution has significant CAPEX and OPEX cost savings that can easily justify the network upgrade.

For further information, please select the following direct link to their website... http://www.xopnetworks.com