AAM’s 3D Flood Simulation of Brisbane was used extensively by Australian and global media during the flood crisis in Brisbane, Australia, earlier this year. The videos were shown on most television news channels in the hours leading up to the Brisbane flood peak and they supplied residents, business owners and the public with realistic 3D representations of the predicted flood event. The videos proved to demonstrate the primary use and benefit of 3D visualization — clear communication! 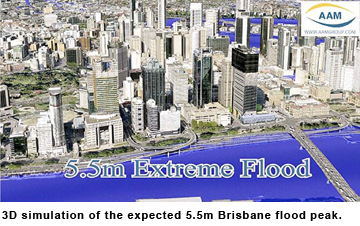 The flood simulation was based on accurate geospatial terrain data created by AAM Pty. and it was produced by a new generation of spatial data accumulation and 3D modelling technologies. These technologies enable a number of Australia’s major cities and towns to use accurate computer models of the built-environment and infrastructure, to support Disaster Monitoring and Management functions, including pre-planning for response and evacuation.

How The Models Were Made
When creating building models such as for the Brisbane flood simulations, the first step is to begin collecting data. AAM collects data by flying over a city with a special camera system known as Pictometry®, which photographs in five directions simultaneously — forward, backward, left, right and straight down.

After the captured imagery is processed, a wire frame model of the buildings is constructed with façade textures automatically harvested from the oblique’s, using a special proprietary 3D photogrammetry technique.

AAM also collects information on ground-level and surface features using vehicle-mounted LiDAR and Spherical Video. Aerial LiDAR is also used to check the height of buildings to ensure that the wire frames are accurate and to also form the ground-level Digital Terrain Model (DTM). This provides the accurate base for building models and other structures to be positioned on. 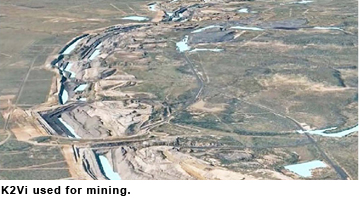 John Blackburn, Spatial Solutions Consultant at AAM, says the combination of photogrammetric and LiDAR technologies are vital to build an accurate spatial model of the real world. Additional spatial data and information from GIS, LIS and Asset Management Systems can be incorporated. It is essentially a “3D framework” of spatial data that can come from multiple sources.

Once the data is organized in this 3D framework, buildings and features can be added or removed as the city changes. The model is then maintained by the council as an up-to-date record of what the city looks like, as well as the components of its built form. AAM often re-flies cities to provide updated models. This is why in particular the 5.5m flood scenario simulation was a highly accurate and valuable tool as the flood began to reach its peak. Inundation modelling of any city or regional area can be addressed in this way, when the so-called “spatial data stack” is available. A request from the Flood Manager or Emergency Management Coordinator for several flood level scenarios would see the scenarios created within an extremely quick turnaround time. 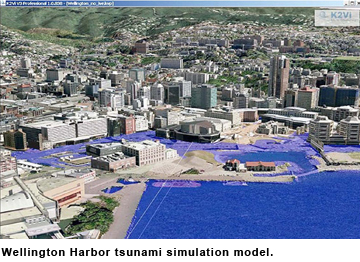 The 3D Visualization
AAM’s own software, K2Vi was used for the actual modelling. K2Vi is an innovative, real-time interactive, 3D visualization and virtual reality software platform that allows the user to quickly generate interactive 3D environments from a wide variety of data formats. As a software tool, K2Vi allows the user to both visualize and interface with spatial data from ‘within’ a virtual reality environment.

The key strength and major point of difference between K2Vi and other 3D visualization products is the interactivity of K2Vi and real-time display of 3D spatial data that may be stored and managed in the corporate GIS.

Many 3D solutions allow you to visualize a development in 3D and sometimes navigate along a fixed path through the scene. However, most of these visualizations are pre-rendered and do not allow interactivity such as freedom of navigation, on-the-fly shadow analysis, scenario toggling. and real-time visibility analysis. 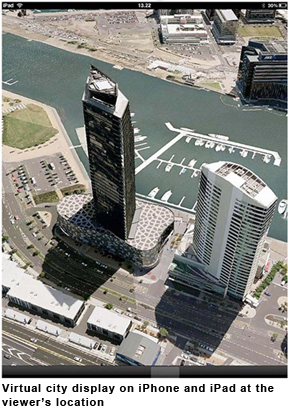 The power of K2Vi interactivity becomes apparent when K2Vi is used during design discussions, consultations and like the flood simulation model—disaster planning and preparation.

“They can view in real-time from any angle, and any position” says Blackburn. “Then they can change the model to reflect a proposed new development and see how it would look, how it would affect the local area in terms of visual impact, skyline, shadows, and how it would obscure views from other buildings”.

Other Uses
K2Vi is used extensively for 3D visual communication in property development, resource/planning consents, military applications, landscape design, town planning, civil engineering and mining. The mining and resources sector presents many opportunities for 3D applications, which even include simulation of the extent of inundation from major rainfall events and the impact on operations and production. The software has also been used to demonstrate and communicate the effects of sea-level rise from climate change at the Copenhagen Summit and the inundation from a real tsunami threat, such as Wellington Harbour.

The role of 3D spatial data for visual communication is now widening to devices in the field of operations by emergency services, homeland security or the public who are in the situation domain. 3D data streaming to personal devices and smartphones is now technically and practically a reality as the personal navigation application on the wireless device becomes a tool to aid situation awareness and evacuation.

AM General Manager, Brian Nicholls, says that he hopes AAM’s simulations help in some way to communicate the scale and extent of the flooding. “We hope that the recent events in Queensland will prompt greater consideration to be given to high resolution mapping, which can then be used to help manage future flood and disaster events in many areas of Australia at risk.” 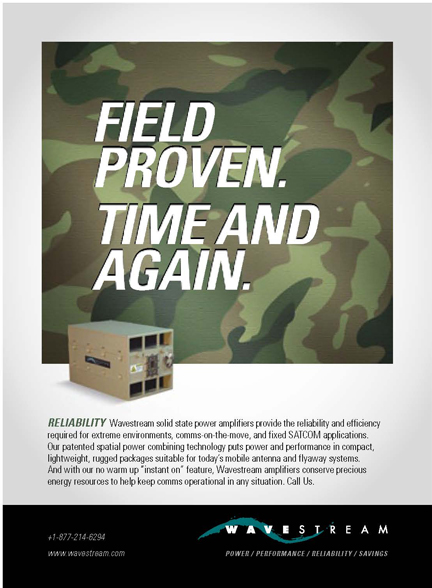 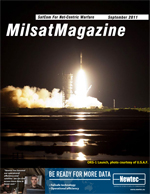