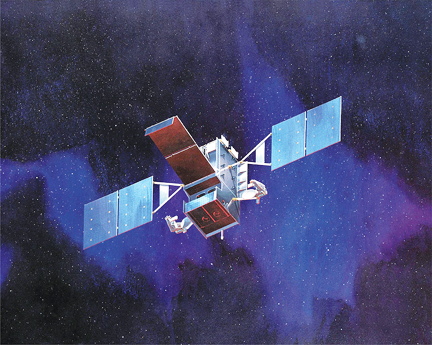 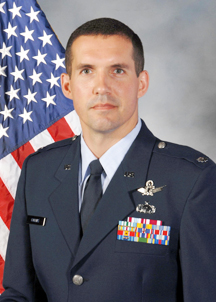 He has performed duties as the Lead Air-to-Air Weapons Judge for two William Tell Air-to-Air Weapons Meets in 1994 and 1996, as an Education with Industry Student and as the Initialization Manager for two classified satellite programs. 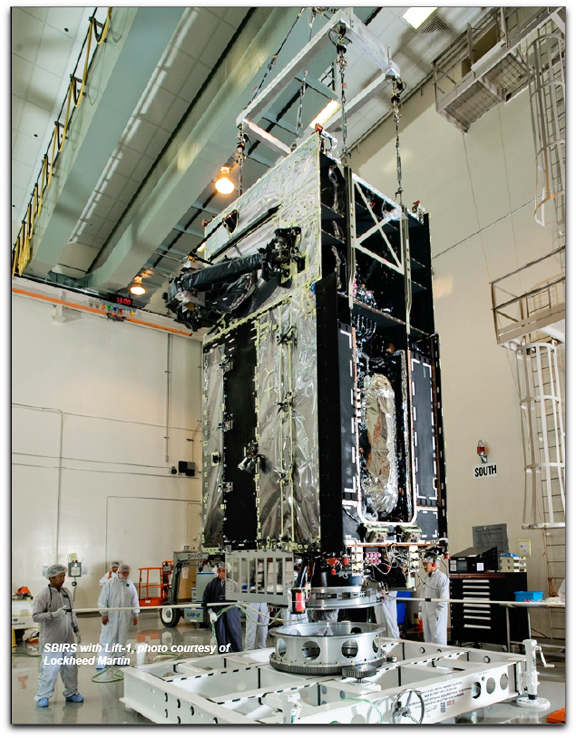 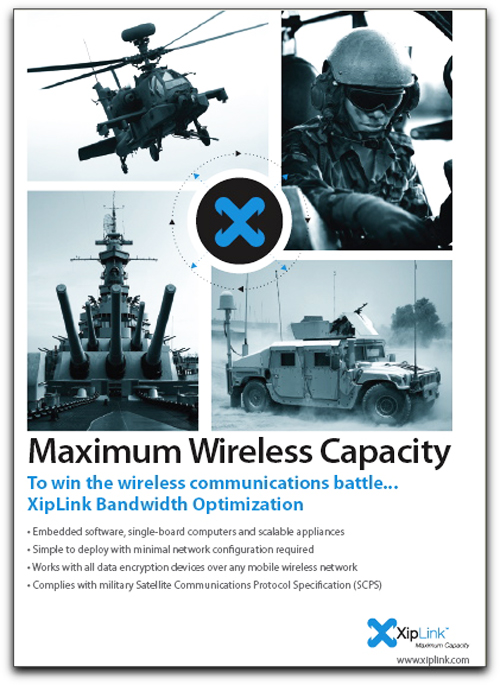 Lt. Col. Collins received a Master’s in Electrical Engineering from the Florida State University in 1996 and a Master’s in Operational Arts and Science from the Air University in 2006. He graduated from Squadron Officer School in 1997 and Air Command and Staff College as a distinguished graduate in 2006. He completed the Defense Acquisition University’s Program Manager Course in 2009. He and his wife Julie have two sons, David and Nathan.

MilsatMagazine had the opportunity to discuss Lt. Col. Collin’s command responsibilities and the importance of SBIRS for our nation.

MilsatMagazine (MSM)
Lt. Col. Collins, why did you select the U.S. Air Force as your career choice?

Lt. Col. Collins
Growing up just outside Plattsburgh AFB, New York, I was always intrigued by the aircraft (FB-111’s and KC-135s) I saw at that base. When it came time to go to college, I immediately looked into Air Force ROTC. From day one in the ROTC program and from my first assignment in 1993, I have been hooked. Now, 17 years later, I’ve had the opportunity to work in several flight test, space operations, and acquisition related assignments and am thankful for the challenges and rewards I’ve experienced along the way. 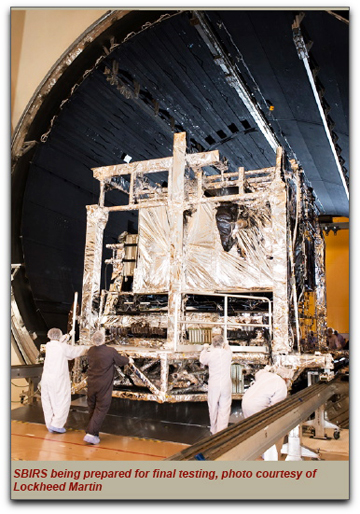 MSM
You have had a number of highly responsible postings within the U.S.A.F., ranging from the 83rd Fighter Weapons Squadron at Tyndall AFB in Florida, to the Chief of Engineering for the 4th Space Operations Squadron at Schriever AFB, to your present assignment as the Commander of the SBIRS Space Squadron. Which of your assignments has afforded you the most enjoyment?

Lt. Col. Collins
I can honestly say that I have enjoyed every one of my assignments. I don’t believe I can select any individual assignment as a favorite.

As I mentioned earlier, I’ve been fortunate enough to have been assigned to unit and missions that offered challenges, obstacles, and opportunities to develop me as an engineer, a program manager, and as a leader. From conducting live air-to-air missile firings, to providing space capabilities directly to the warfighters, to launching first-of-their-kind satellite systems, each has rewarded me with the knowledge that I have made a difference and have been able to contribute to the nation and the Air Force. 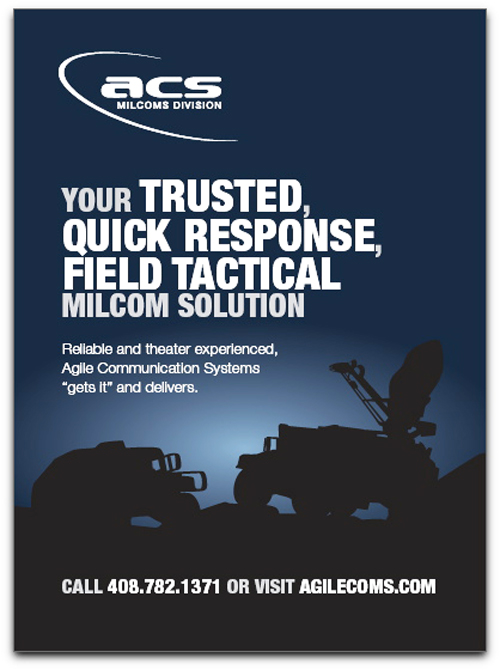 MSM
What are your primary concerns for the defense of our Nation? Will our technologies manage to sustain our forces throughout the world as we move forward?

Lt. Col. Collins
My primary concern for the nation centers on the new and extremely dynamic adversaries we now face. The level of change I have seen in just the last few years rivals the total change I saw the first 15 years of my career. The challenge is to keep up with, and if possible, stay ahead of that ever-changing enemy. As to whether our technologies will sustain our forces going forward, absolutely.

Having worked in the acquisition side most of my career, I have seen the new technologies, the new systems, and the new capabilities that are in development, in testing, and in the field, and they are absolutely the best in the world.

On top of that, we have a force comprised of the finest, most dedicated officers, enlisted, and civilians. They are devoted to the mission, and ingenious in their ability to solve problems, to develop new CONOPS (Concept of Operation) and capabilities, and to simply execute the mission when needed.

MSM
Lt. Col. Collins, what are the responsibilities of the SBIRS Space Squadron? Why is SBIRS so important to our nation? What role will SBIRS play in defending our nation and our allies?

MSM
What role do you play within this organization and who comprises your staff for this squadron?

Lt. Col. Collins
As the Commander of the SBIRS Space Squadron, I’m responsible for executing the assigned mission. This entails setting program priorities, making programmatic and technical decisions, and most importantly taking care of the people assigned under me. This includes a combined 52-person team made up of Air Force officers and civilians, as well as, a number of technical support contractors.

MSM
Is this strictly an interface within the Air Force community, or do you interface with a range of external resources as well? If so, who else is involved with your various missions?

Lt. Col. Collins
While the program is integrated throughout the DoD, the Services and national agencies, my role keeps me focused on the integration, test, and launch of the GEO satellites. That means my primary interfaces are with the SBIRS prime contractor, Lockheed Martin, and the Air Force’s launch community, made up of the Launch and Range Systems Wing here at Space & Missile Center at Los Angeles Air Force Base as well as the launch vehicle contractor, United Launch Alliance.

MSM
Exactly what do SBIRS spacecraft accomplish? Why do we need them?

Lt. Col. Collins
The SBIRS program is the nation’s Space Based Infrared System, targeting, and tracking for, missile warning, missile defense, battlespace awareness, and technical intelligence. The SBIRS system is critical for protection against global and theater ballistic missile attacks against the United States, its deployed forces and its allies.

MSM
Who is building the GEO satellites and when can we expect the first launches of these spacecraft? 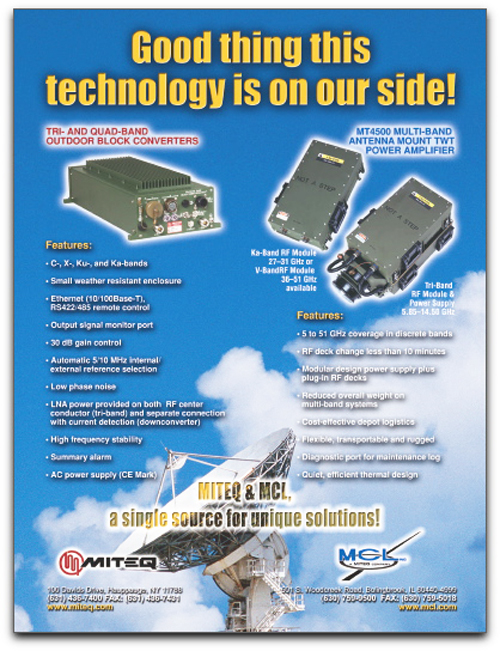 Lt. Col. Collins
The prime contractor for the SBIRS GEO satellites is Lockheed Martin Space Systems Company in Sunnyvale, California. The first vehicle, GEO-1, completed its most important and grueling test, thermal vacuum test, in November of 2009. This was the final environmental test to ensure the satellite would survive and operate in the space environment. Once GEO-1 receives the final launch-build of flight software and completes its final testing, we are planning to ship the vehicle to the launch base in Spring 2010.

GEO-2 recently completed its first phase of Baseline Integrated System Test (BIST-1), which is used to generate an initial performance baseline for the satellite. This initial baseline will be compared against downstream test results to verify steady and stable satellite performance throughout the test program. GEO-2 is following GEO-1 by about a year and is scheduled to ship to the launch base in Spring 2012.

MSM
When discussing the SBIRS Space Squadron, the term Overhead Persistent Infrared satellites is heard over and over again. Please inform our readers as to what OPIR satellites’ capabilities include and how they apply to SBIRS. 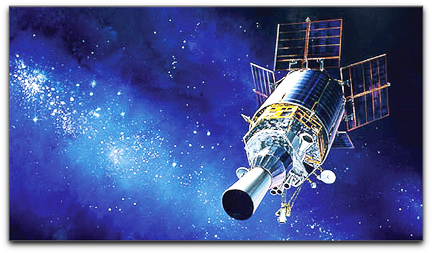 MSM
We are intrigued with your duties as the Lead Air-to-Air Weapons Judge for two William Tell Air-to-Air Weapons Meets in 1994 and 1996. Could you explain what exercise that was and what set of disciplines it was furthering for our armed forces?

Lt. Col. Collins
William Tell is an air-to-air weapons meet that dates back to 1954. During the two-week competition, aircrew performance, as well as weapons and tactics use, is tested in air dominance and air sovereignty missions. Additional areas of evaluation included weapons loading, maintenance, and ground control. My duties centered on scoring the air-to-air missile employment scenario.< br />
I’d also like to thank your publication for the opportunity to discuss key topics of interest. SBIRS is a major system for the country, with the primary focus on providing missile warning to our combatant commanders as well as providing protection to the nation and our allies. We are receiving positive confirmation each day that, in fact, the SBIRS system is truly making a significant difference on the battlefield.

Addendum: It doesn’t seem so long ago that Northrop Grumman Corporation delivered the first SBIRS geosynchronous orbit (GEO) payload to prime contractor Lockheed Martin for integration into the spacecraft and final system-level testing. The GEO-1 payload consisted of a scanning sensor and a staring sensor as well as other key spacecraft subsystems and electronics that included a pointing and control assembly (PCA). The scanning sensor is designed for continuous observation and surveillance of traditional intercontinental ballistic missile threats. The staring sensor is designed to detect very low signature, short-burn-duration theater missiles. Together, the sensors contain nearly one million detector elements in their two focal planes.

Northrop Grumman Electronics Systems sector provided the infrared payload, electronics, and ground processing for the mission data processor to the Lockheed Martin-led Space-Based Infrared System (SBIRS) High team. SBIRS High is a series of high Earth orbiting satellites whose sensitive infrared sensors can detect the launch of strategic and theater ballistic missiles from space and pass the time and location of launch to battlefield commanders.

SBIRS High works in conjunction with the Space Tracking and Surveillance System (STSS), a constellation of missile tracking satellites capable of performing missile defense, missile tracking, technical intelligence and battlespace characterization. The company’s Aerospace Sector is leading the STSS industry team. Electronic Systems will contribute to the systems engineering, ground segment and algorithms. Plus, the sector will be one of two competitors for the sensor payload and ground station data processing program. The sector also provides space-borne sensing for early warning systems, weather and ground systems that process C4ISR data from space-based platforms for high-priority U.S. government national security programs.

For more than 30 years, Electronic Systems has supplied the sensors for scores of space-based missions, including the Gemini rendezvous radar, the cloud imager for the Defense Meteorological Satellite Program, the infrared sensor for the Defense Support Program and the multispectral/hyperspectral cameras for the Orb View-3 and Orb View-4 commercial remote sensing program.