Throughout history, improved and flexible logistics for moving assets have been critical in conquering new frontiers. 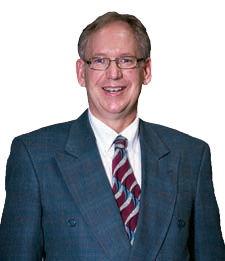 The frontier of space is no different. Innovations in-space propulsion capabilities are key to cost effectively station greater payload mass at high orbit and to enable the servicing, repositioning and repurposing of large space assets. Enhanced cargo delivery capabilities are needed to sustainably expand the horizon of human space exploration. Traditional chemical rockets are not practical for accomplishing these missions.

A new “in-space tug capability” will emerge when powerful electric vehicles are developed to efficiently use recent advances in solar electric power for space. Variable Specific Impulse Magneto-plasma Rocket (VASIMR®) engines will be vital for these tugs in much the way that powerful diesel engines are for moving goods on the ground. For more background on this topic, please watch the documentary, “Crossing the Space Frontier” at www.adastrarocket.com/aarc/video.

A VASIMR® engine provides steady-state thrust using an electrical power source to create a directed plasma jet. VASIMR® technology is much different from other electric propulsion systems based on the familiar Hall or ion engines. Instead of using a direct current bias, VASIMR® engines ionize the propellant and accelerate the resulting plasma using Radio Frequency (RF) waves. These waves couple power into naturally occurring resonant modes that heat the magnetized plasma to temperatures of millions of degrees, comparable to interior regions of the sun. The strong magnetic fields in the VASIMR® design protect material surfaces from these temperatures. 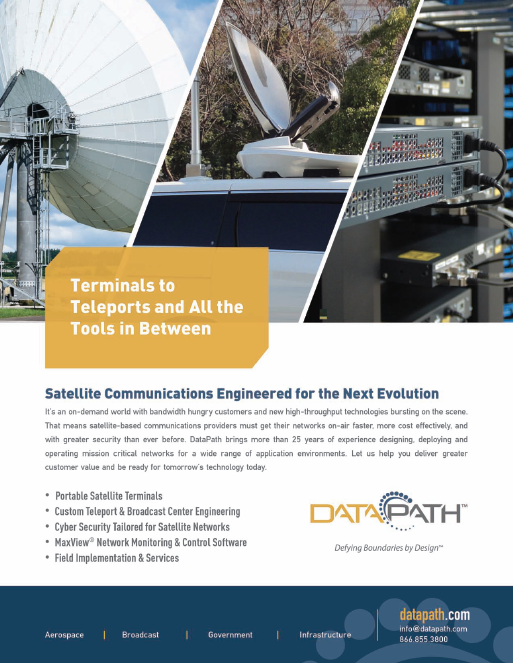 With very high specific impulse, the propellant mass no longer dominates the total mass of the spacecraft and entirely new options become available to solve orbital mechanics problems. In contrast with chemical propulsion, the power source for a VASIMR® engine is also completely independent of the propellant. This independence makes power available for non-propulsive purposes and allows complete reuse of power and propulsion assets with only chemically inert propellant needed for resupply.

The VASIMR® engine somewhat uniquely allows its specific impulse and thrust to be tuned over a wide range while maintaining a constant input power. This capability allows mission flexibility and operational resilience.

For example, argon or krypton stored at mildly cryogenic temperatures (argon freezes below 83 K, krypton below 115 K) provide excellent performance with specific impulse ranging from 2500 s to more than 5000 s. Xenon can also be used for propellant, if very low specific impulse and high thrust is required, but xenon is typically a poor choice for VASIMR® engines because it is expensive and requires more powerful magnetic fields than lighter gases. 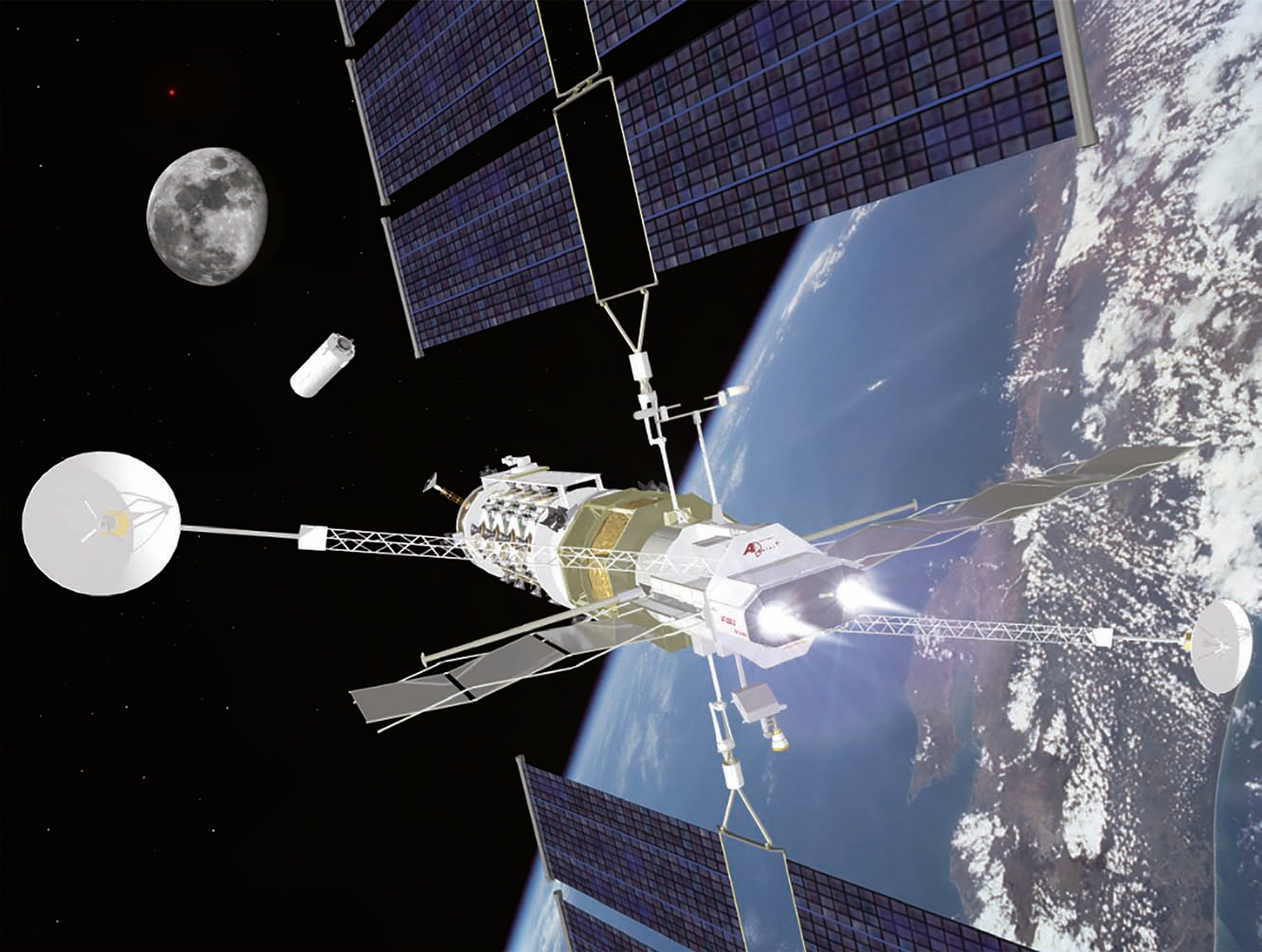 The High-Power Regime
VASIMR® engines have advantage in the high-power, greater than 50 kW, realm for electric propulsion. A convenient way to visualize the natural power regimes for VASIMR® and Hall technologies is to plot the ratio of total propulsion mass to jet power versus the jet power required to accomplish the mission.

The comparison must account for the total mass of the propulsion system including the solar electric power plant, the power processing unit and the thruster itself. The goal is, of course, to reduce the overall propulsion system mass as much as possible. By assuming the same specific impulse for both systems and the same weight for the solar array, the salient features of the two technologies can be assessed side-by-side and favorable power regimes for each can be identified.

From Figure 1, it is evident that different technologies have advantages in different power regimes. The controlling physics behind each technology is responsible for this difference.

With present-day magnet technology, a Hall system has an advantage for power levels well below 50 kW, but above 50 kW, the VASIMR® system is clearly the better choice. This transition to the VASIMR® power regime will shift to lower values of power as the thin-film technology supporting high-temperature, superconducting magnets continues to improve. The mass of the solar electric power plant, assumed here to be 7 kg/kW, will also begin to dominate the total mass of the propulsion system as magnet technology improves and as power levels increase.

VASIMR® technology has additional operational advantages. One is the very high power-to-thrust conversion efficiency, which allows more than 65 percent of the solar electric power to be converted into thrust-producing jet power.

Other advantages are the absence of any direct current bias and the nearly linear behavior of the underlying RF wave physics. These attributes minimize coupling between the plasma, the RF power processing units, the solar arrays, and other parts of the vehicle.

The DC to RF power processing units are also straightforward, single stage and robust, using extremely efficient field-effect transistor technologies widely utilized throughout the commercial broadcast industry. More information about the VASIMR® mass scaling can be found at http://adastrarocket.com/infographics/VASIMR-Hall-Power-Niches-07-03-14.pdf, www.adastrarocket.com/IEPC13-149_JPSquire_submit.pdf, and at www.adastrarocket.com/Jared-Space2014.pdf .

Orbital Debris Removal
Removal of many large orbital debris objects in a single mission exemplifies the innovative mission capabilities enabled by solar electric propulsion in the VASIMR® high-power regime. Specifically, accessing and de-orbiting many spent upper stages jettisoned in multiple orbit planes during the long history of satellite launches to polar orbit requires propulsively extreme maneuvers. Mathematical tools for the ‘traveling salesman’ problem were used to optimize the specific impulse for a mission while minimizing mission time and propellant usage for a solar electric tug equipped with a 200 kW VASIMR® engine.

The resulting concept was able to capture 19 known rocket upper stages (Zenits for this example) and de-orbit them in a controlled manner over the Pacific Ocean. Each upper stage debris object is large, approximately 4 m in diameter, 10 m long, and weighs approximately 8 tons.

The concept outfits the solar electric propulsion tug with a specialized service module containing a tray holding 20 solid rocket motors and a detachable chemical robotic pod. The tug, with service module, climbs to the altitude of a drifting upper stage, approximately 800 km, and positions itself at a safe distance from the debris. 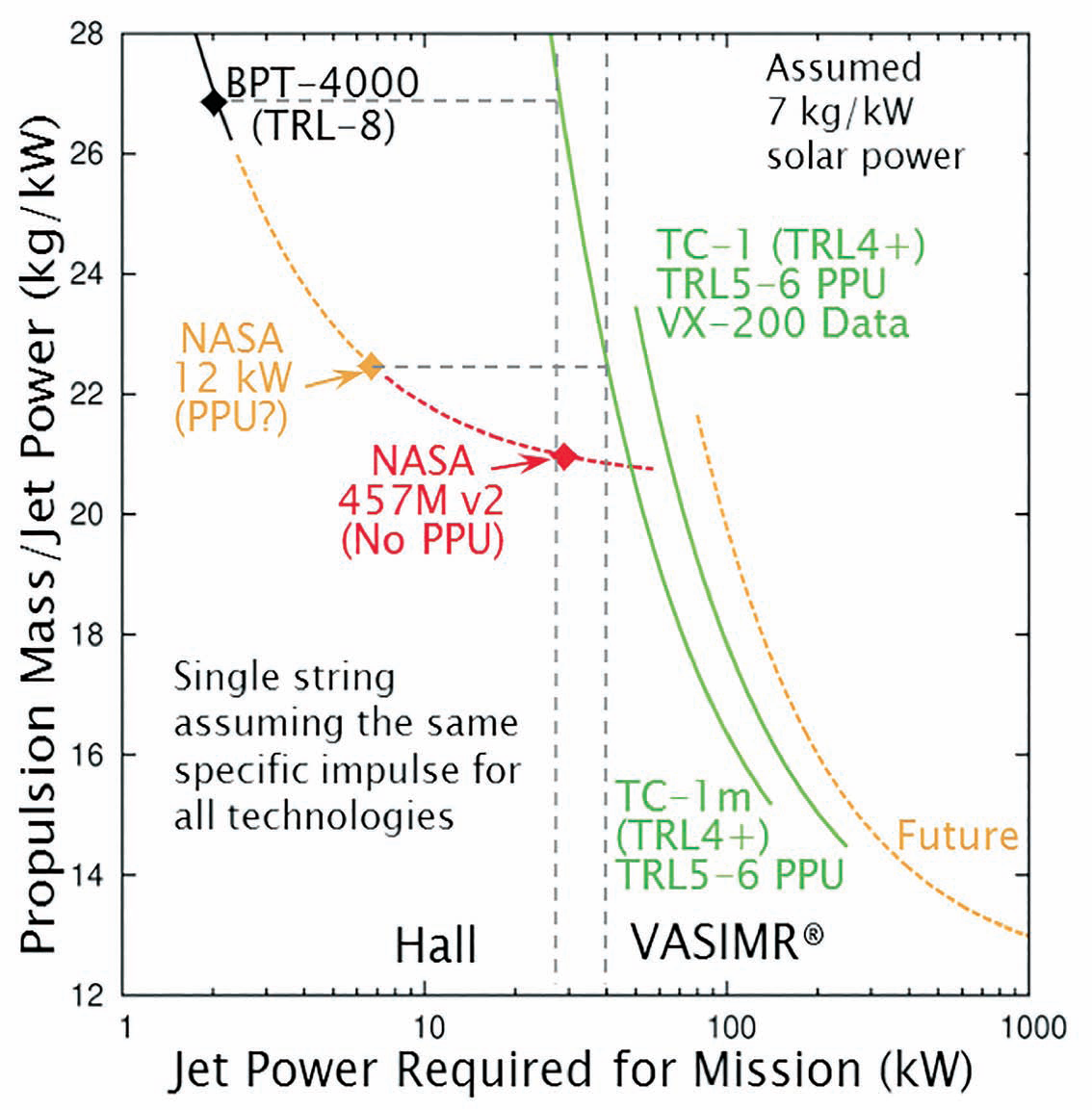 The tug’s VASIMR® engine is then used to efficiently lower the orbit of the upper stage to approximately 400 km, a location from which the implanted solid rocket motor can detach and complete the controlled atmospheric reentry of the upper stage into the Pacific. The VASIMR® engine then repositions the tug with its service module at the next upper stage and the de-orbiting process is repeated 18 more times before the VASIMR® engine requires a resupply of propellant from the ground. This same tug could be used for movement of other space assets to a variety of destinations.

The optimum specific impulse range for this debris de-orbiting mission was found to be between 4,500 and 5,000 seconds, well suited for a VASIMR® engine operating with low-cost argon propellant. Lower specific impulse cases resulted in a substantial increase in the initial mass of propellant launched to Low Earth Orbit (LEO) for the mission, which dramatically increases the time and overall cost of the mission.

The high performance of a VASIMR® engine for this application makes the debris removal both faster and cheaper than with other electric propulsion technologies. For more information, read http://adastrarocket.com/infographics/VASIMR-Orbital-Cleaner.pdf or watch the video at http://www.adastrarocket.com/aarc/media-and-gallery.

VASIMR® Engine Development Status
Since its inception in 2005, Ad Astra Rocket Company has advanced the Technical Readiness Level (TRL) of the VASIMR® engine almost exclusively with private funding. In 2013, after more than $30 million in private capital investment, the company completed more than 10,000 successful high power firings of its most advanced VASIMR® prototype, the VX- 200™, in Ad Astra’s Houston vacuum chamber facility. 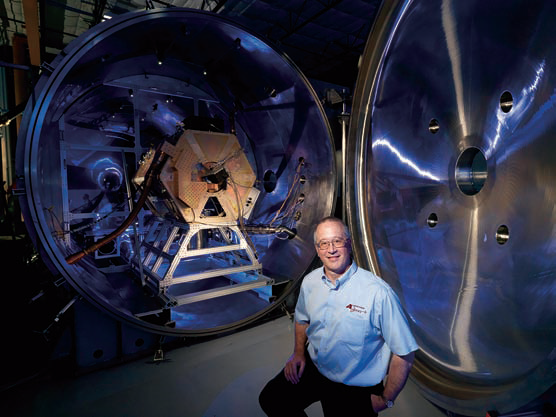 These tests with argon propellant demonstrated the engine’s excellent firing repeatability and performance (6 N thrust, 5000 s specific impulse, and a thruster efficiency greater than 70 percent) with no measurable signs of engine wear. To optimize company resources at the time, these earlier tests were all of short duration, less than 1 minute, but sufficient to reliably establish the rocket’s performance and measure thermal loads. Technical information about Ad Astra’s VX-200 experiment performance is available at www.adastrarocket.com/Ben-JPP-2014.pdf.

Ad Astra Rocket Company was recently selected by NASA as one of the winners of its Next Space Technologies for Exploration Partnerships (NextSTEP). Authorization to proceed was granted on August 7, 2015 and work is now well underway. This three-year partnership with NASA, valued at approximately $9 million, will advance the VASIMR® engine to a TRL greater than 5, a major step closer to spaceflight. The project will build and demonstrate a fully integrated system, the VX-200SS™ laboratory prototype, by operating continuously at 100 kW for a minimum of 100 hours. The long duration test under the NextSTEP program will thoroughly evaluate the engine’s new proprietary core design and thermal control subsystem. The test will also provide a better estimate for component lifetime.

Visit Ad Astra Rocket Company at www.adastrarocket.com to find out more about the development of the VASIMR® engine. 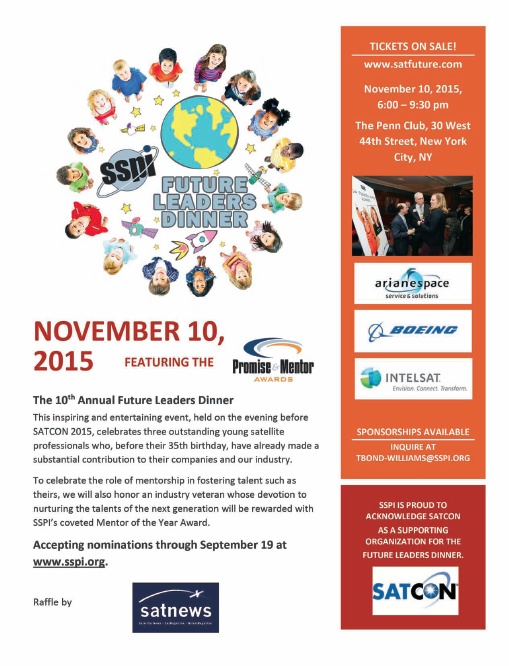