Some important, horrifying, costly lessons have been learned in the past several months, about the dangerous world we live in. These lessons teach us that no country, especially the United States, can place its affairs on autopilot and blithely hope to wish away events that do, in fact, affect every person on the planet.

This failure to lead in our grotesquely destabilized world is not, of course, a uniquely American problem. But most of the free world still regards the U.S. as a super power, and its economic and political interests around the globe are larger than most. The world still expects America to lead, even if some in Washington, D.C., have grown comfortable with the idea that the nation no longer should.

This current lack of “active rudder control” certainly affects space programs. For the first time since the Space Foundation began tracking the data, U.S. government investment in space programs declined significantly in 2013, down almost 10 percent from 2012. This retreat from leadership in space was in notable contrast to most other national space programs, which saw increased investment—the rest of the space faring world essentially heading north while the U.S. went south.

The chart below, from The Space Report 2014, details America’s divergence from both the strategies of its allies and its adversaries. While it is true that the United States continues to invest more in space than all other countries combined, it will not be true in just a few years if the downward trend is not arrested.

This autopilot, or lack of active rudder control, approach is painfully apparent in both the executive and legislative branches. In the former, it has manifested as a foreign policy mantra of “Don’t do Stupid S---”, which is a bumper sticker, not a policy or plan.

In the latter, it has taken the form of the Budget Control Act. In both cases, it is hands off flying that ignores headwinds, tailwinds, storm systems, the importance of the capabilities and condition of the ship you are flying and the fact that other people may be trying to shoot you out of the sky.

I’m not a military analyst or foreign policy historian, so I’m not going to attempt to parse the complex situation brewing in the Syria-Iraq deserts, except to say this: a huge, radicalized army has been building, largely unchecked, with the expressed, clearly stated purpose of destroying the United States and its allies. This is not the time for U.S. defense policy, or budgets, to be on autopilot, or for its defense and national security space capabilities to be drawing down.

Of course it is space capability that concerns us at the Space Foundation. With U.S. space budgets down 9.4 percent from 2012 to 2013, how much lower can they go before the nation’s intelligence, surveillance, reconnaissance, command, control and communication capabilities begin to atrophy? The answer is, not much. The same is true for the country’s civil space programs, which are already on razor thin margins because of a different kind of autopilot, the “flat-lining” of budgets at artificial levels that forces program managers to trade capabilities and schedules in order to live within funding profiles that change little from year to year, and, thus, are unresponsive to actual program needs.

Thus, NASA, as an example, gets about $18 billion a year, every year, because that is what the agency always gets, regardless of what it is trying to actually do at any point in time. That $4,500 I gave you to buy a car back in 1972 was good enough then, and it ought to be good enough now. Of course, it doesn’t even pay the sales tax on the car all these years later.

If you have any question about the discrepancies between what the administrative and legislative branches have asked NASA to do, and the woefully inadequate resources that have been provided in recent years, go ahead and read the report of The Review of Human Spaceflight Plans Committee, or, for that matter, almost any report from any of the committees that have been charged with reviewing the U.S. space program in recent decades. The math just doesn’t add up.

But political math is simple math. It doesn’t hurt the head and you don’t have to sit down with your colleagues, collaborate across party lines, and figure out complex programs. And it gets the country a federal budget that does respond to politics, if not to actual national requirements.

To make matters worse, most of the public has already forgotten that both national security space programs and civil space programs are further imperiled by something called the Budget Control Act; Which really should be called the Budget Out of Control Act, because it places the federal budget on an automatic, across the board, forced reduction that is absent any kind of prioritization, periodic review or adjustment that might reflect actual requirements, economic realities, or what is going on in the world around us. 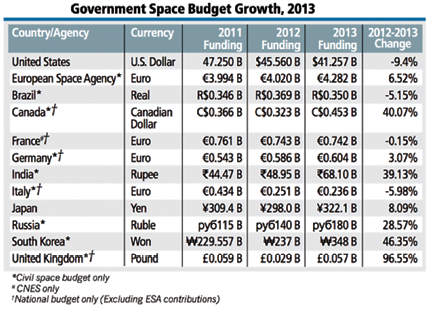 At the time of this writing, most elected officials in Washington, D.C. appear focused on mid-term elections, not the Budget Out of Control Act. (Although, in fairness, not all politicians are focused on the mid-term elections. Two-thirds of the Senate is not up for re-election in November, and still other politicians are focused on the 2016 Presidential election.) But the Department of Defense, the U.S. Air Force and the other uniformed services, NASA, NOAA the NRO and others are keenly focused on the Budget Out of Control Act, because it remains the law of the land and will shortly be hitting American space capabilities like a ton of space debris at a time when the country can ill afford it.

ISIS, ISIL, or whatever they’re called. Russia in Ukraine. A civilian jetliner shot from the skies. Radicalized Jihadist armies forming. Americans, and Britons, being ceremonially beheaded on the news. Rockets raining on Israel. Israel shooting back. Hurricanes in Hawai’i, fire and drought in California. Chemical weapons in Syria (again). Beloved leader off his nut in North Korea. More Jihadists at the gates of the Golan Heights. Ebola.

These things are kind of important. A federal budget on autopilot cannot respond to them. The Department of Defense needs to be able to defend the nation’s citizens and interests, and space systems are a bedrock of that defense. NASA needs to help keep U.S. technical capabilities sharp in the face of increasing competition. We have a global pandemic to respond to that’s simply not in the “autopilot” budget.

It just doesn’t feel like a great time to go into some kind of cost-cutting death spiral.

Now, I’m no War Pig (yes, I grew up listening to Black Sabbath). Truth be told, I’m actually quite liberal, but don’t quote me on that. As a sometimes advisor to the U.S. Air Force, I know the toll that more than 20 years worth of daily combat air operations has taken on our air men and women. Right now, most Americans are tired of battle and would like to keep our warriors home. I’m one of them.

But whether the combat is economic or military, I do realize that you cannot always pick your own battles. Sometimes the fight comes to you. And you’d better be ready.

This article is courtesy of Space Foundation’s Space Watch newsletter and is repurposed with full permission received.

Named chief executive officer of the Space Foundation in 2001, Elliot Pulham leads a premier team of space and education professionals providing services to educators and students, government officials, news media and the space industry around the world. He is widely quoted by national, international and trade media in coverage of space activities and space-related issues. Before joining the Space Foundation, he was senior manager of public relations, employee communication and advertising for all space programs of Boeing, serving as spokesperson at the Kennedy Space Center for the Magellan, Galileo and Ulysses interplanetary missions, among others. He is a recipient of the coveted Silver Anvil Award from the Public Relations Society of America—the profession’s highest honor. In 2003, the Rotary National Awards for Space Achievement Foundation presented him with the coveted Space Communicator Award, an honor he shares with the late legendary CBS News Anchor Walter Cronkite and former CNN News Anchor Miles O’Brien. Pulham is a former Air Force Civic Leader and advisor to the Chief of Staff and Secretary of the Air Force and a recipient of the U.S. Air Force Distinguished Public Service Medal. He serves on the editorial board of New Space Journal.

The Space Foundation will be hosting and producing the 31st Space Symposium, April 13- 15, 2015, in Colorado Springs, Colorado, at The Broadmoor Hotel. For further information, or to register, please visit http://www.spacesymposium.org/ 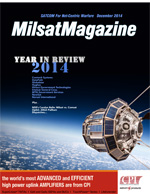