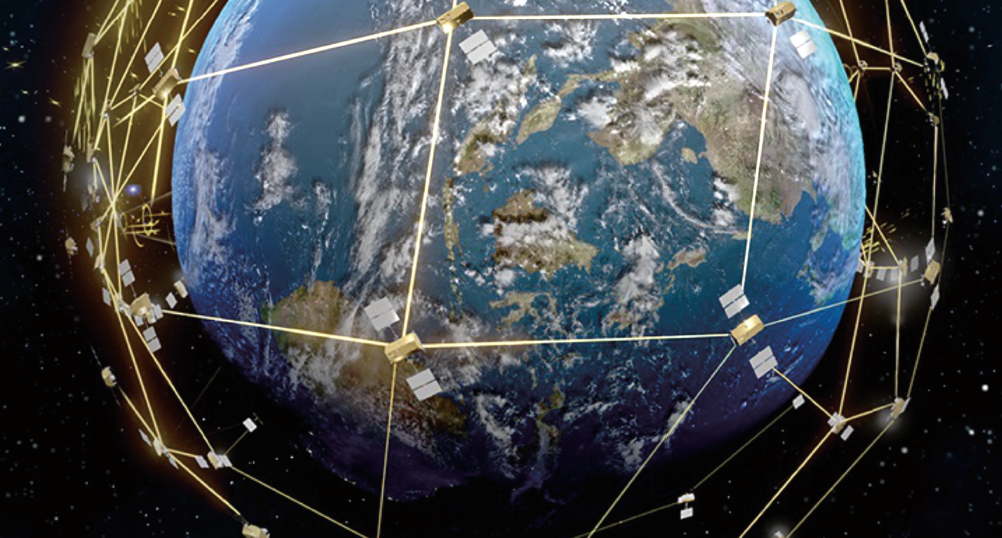 Josh Miner is the Vice President and General Manager for the Land Mobile line of business at Iridium Communications Inc., the only satellite communications company that offers truly global voice and data coverage. In this role, he is responsible for Iridium’s Land Mobile revenue growth, product strategy, new product and service definition, demand generation programs, and major partnership support.

Miner launched a new product portfolio for the company, including Iridium Extreme and brought the Iridium AxcessPoint portfolio to market.

Why are SATCOM tools so crucial to the work of first responders, scientists and emergency personnel? 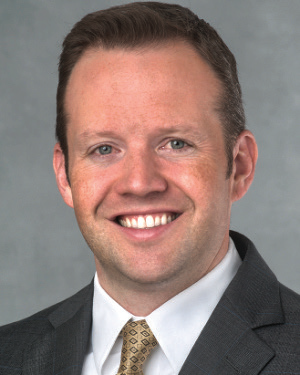 Josh Miner
For global aid workers, scientific researchers and emergency responders, the ability to communicate at all times is a top priority. During times of crisis or when deployed in conflict areas, having reliable communications tools not only helps with the success of each mission or emergency response effort, but provides a level of safety and security that should never be compromised.

Today, satellite communications (SATCOM) devices and solutions keep aid workers, researchers and emergency responders connected when it’s needed most. The role of SATCOM during emergency response efforts and NGO missions is to be a reliable companion. No matter how dangerous or critical the situation, SATCOM should always be on hand to act as that safety net for those on the ground. 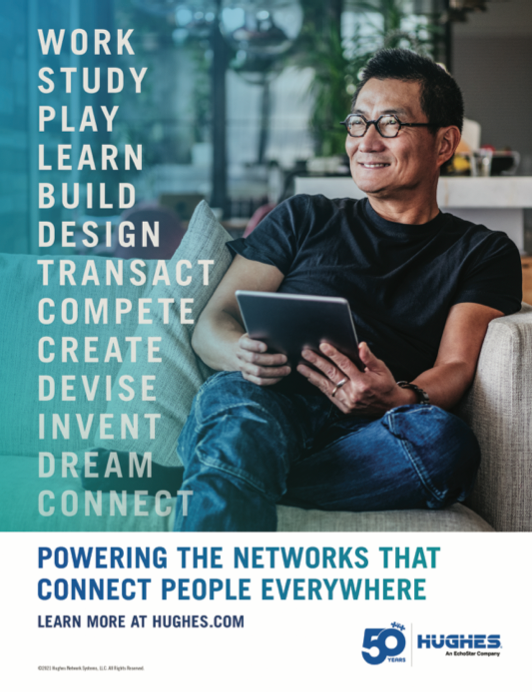 Oftentimes, NGO workers and emergency responders are deployed to remote regions of the world where terrestrial infrastructure has been compromised, is limited or is nonexistent. As satellite devices rely on a communications infrastructure in the sky, no matter what has taken place on the ground, end users can feel secure knowing that their ability to communicate with teammates or coordinate important operational details will remain intact.

When it comes to preparedness, the recommendation is that any organization operating in remote or areas of conflict equip their teams with some form of SATCOM. Whether that connectivity be a phone, a broadband terminal or a wearable device, these tools can act as either primary or backup modes of communications when cellular or HF radio is unavailable.

As an example, Iridium® Push-to-Talk (PTT) enables group communications anywhere on the planet, allowing teams of as many as 10 talkgroups to communicate over one network, even across multiple continents. The Iridium PTT suite of devices, including the Iridium Extreme® PTT and Icom IC-SAT100, deliver highly mobile, low-latency group communications that are capable of enabling connectivity within buildings, vehicles or for handheld deployments. Just like traditional Land Mobile Radios ( LMR), Iridium PTT makes group communications possible at the push of a button; however, rather than relying on tower-based infrastructure, Iridium PTT leverages the global and reliable connectivity of the Iridium satellite network. It can be instantly deployed, eliminating the challenges and high costs associated with building out landbased infrastructure in remote areas and is reliable even in inclement weather.

In addition to its reliable as well as global coverage, for organizations such as NGOs and global governments, Iridium PTT offers a highly secure connection with AES256 encryption, ensuring the safety of deployed teams and security of each mission.

What sets Iridium apart from other satellite providers when emergency communications for relief workers and first responders are not just needed, but absolutely and critically required?

Josh Miner
First and foremost, our network is what really sets us apart from the rest of the pack. All Iridium Connected® satellite devices come with the inherent advantages of the Iridium network. Iridium’s mobile satellite network is comprised of 66 Low Earth Orbit (LEO) cross linked satellites that create a web of coverage around the entire planet. Due to this unique network architecture, end users experience ubiquitous, low-latency communications — no matter where their work takes them. Additionally, our L-band signal is weather resilient and highly reliable, making it an ideal option for mobile communications applications, especially during an emergency, such as a natural disaster.

Secondly, our vast partner network is constantly innovating and creating new products and services using our network that are helping connect people and organizations across the globe. For instance, the Thales MissionLINK™ is a lightweight, small form factor, rugged terminal that delivers reliable and critical communications capabilities no matter the landscape. This terminal can be mounted on top of a vehicle for comms-onthe- move or keep teams connected onsite when outside of the vehicle via its Wi-Fi capability, all while delivering the same level of service and reliability. The terminal leverages Iridium Certus® 700, our satellite broadband service that offers the fastest L-band speeds on the market today. MissionLINK terminals can serve as primary modes of communications or as complementary communications solutions. For example, organizations relying on Very Small Aperture Terminals (VSAT) as their main communication source should always have a backup. While VSAT terminals enable high bandwidth capabilities, they are notorious for being affected by inclement weather or difficult topography. A MissionLINK terminal can provide reliable connectivity, even in those challenging situations.

Can you offer any examples, even if general, of specific missions or organizations Iridium is supporting in the NGO space?

Josh Miner
Iridium’s satellite technology is supporting a variety of NGOs and emergency response groups around the world. For instance, our solutions helped a scientific NGO called the IK Foundation collect vital biologic data from a highly remote island in Norway. This area of the world has been mostly untouched and is home to a variety of wildlife species and other scientific resources. Due to its remote location, harsh topography and lack of ground-based communications infrastructure, this region has not been studied often. In order to collect critical data, the IK Foundation deployed a Thales MissionLINK terminal to enable connectivity at the study site over the course of one year. Scientists were able to collect and distribute data and photos and remotely surveil the environment throughout the duration of their project, 24/7, even during extreme conditions like snow and ice storms.

The amount of raw biological data that was collected significantly bolstered scientific research around the world and has changed the way the foundation conducts research for the better. Additionally, the Republic of Indonesia’s government recently adopted Iridium PTT devices to support communication efforts across the country. 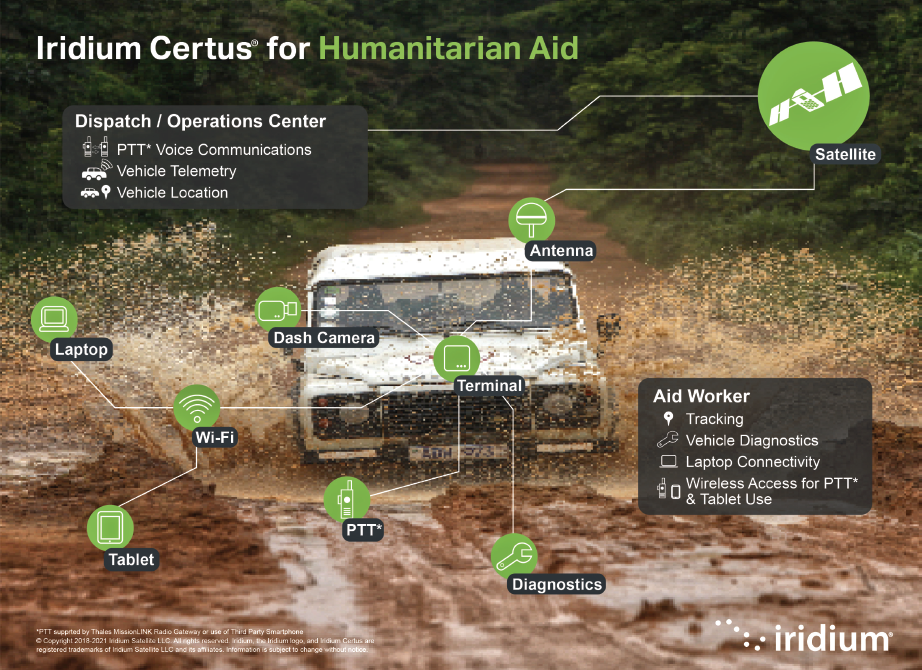 The government fully deployed 500 Iridium PTT handsets to help support real-time communications across its diverse island landscapes, where building and maintaining terrestrial infrastructure is often costly and impractical. With Iridium PTT, the Indonesian government now has access to a “grab-and-go” satellite communications solution, to help enable reliable communications during emergencies and natural disasters, like earthquakes, volcanic eruptions, and tsunamis, which impact this region of the world.

Beyond these examples, our satellite solutions have helped aid workers administer vaccines, track and monitor critical health data and keep rescue and NGO workers safe while on missions in conflict zones.

How do you see the role of satellite communications providers evolving in the NGO and emergency response industries over the next five years? Can you elaborate on how you see Iridium’s role expanding as well?

Josh Miner
We believe that over the next five years, we will see an increase in SATCOM usage across all organizations, but especially within NGO and emergency response groups. With increasing natural disasters, an uptick in environmental and scientific research, and health crises across the globe, it will be critical for teams to be equipped with the best and most reliable communications tools. This is paramount to ensure all who need assistance can receive the help they need, and that those responsible for administering care are kept safe and connected. Additionally, over the next five years we expect to see landbased and High Frequency ( HF) radio usage phased out and replaced with SATCOM solutions such as Iridium PTT.

Currently, organizations relying on HF radios are limited in their reach and oftentimes hindered by the complicated training and cumbersome networking required to support the use of HF radios. We are working with several NGOs that are moving toward using Iridium PTT as an HF radio replacement.

So far, the feedback has been stellar. Between the ability to rapidly deploy the service, its reliability and unmatched coverage, we expect to see an increase in Iridium PTT usage for relief and aid workers, superseding all other long-range radio systems in the coming years. We are proud to support such critical work and look forward to continuing to provide connectivity and communications lifelines to those working on the front lines.
www.iridium.com