Since Galileo first started gazing at the stars atop a mountain in Italy, to modern-day astronomers who can see billions of miles into space, the general design of a telescope has pretty much remained the same.

In fact, even if you’re looking at the stars using only the light-sensitive cells in your eyes, the image-forming process works the same way. Both methods collect light from an object and then reflect that light to form an image. Just like observatories and science classrooms use telescopes to gaze up, satellites use telescopes, too. That’s how we get map images and weather forecasts, and you may recognize the most famous of these eyes in space, the incredible Hubble Space Telescope.

From space, the need for higher-resolution imaging to resolve far away objects requires bigger and bigger telescopes to the point where the size, weight and power of the telescope can completely dominate a system. Plus, it’s also really expensive to put big, heavy objects in space. 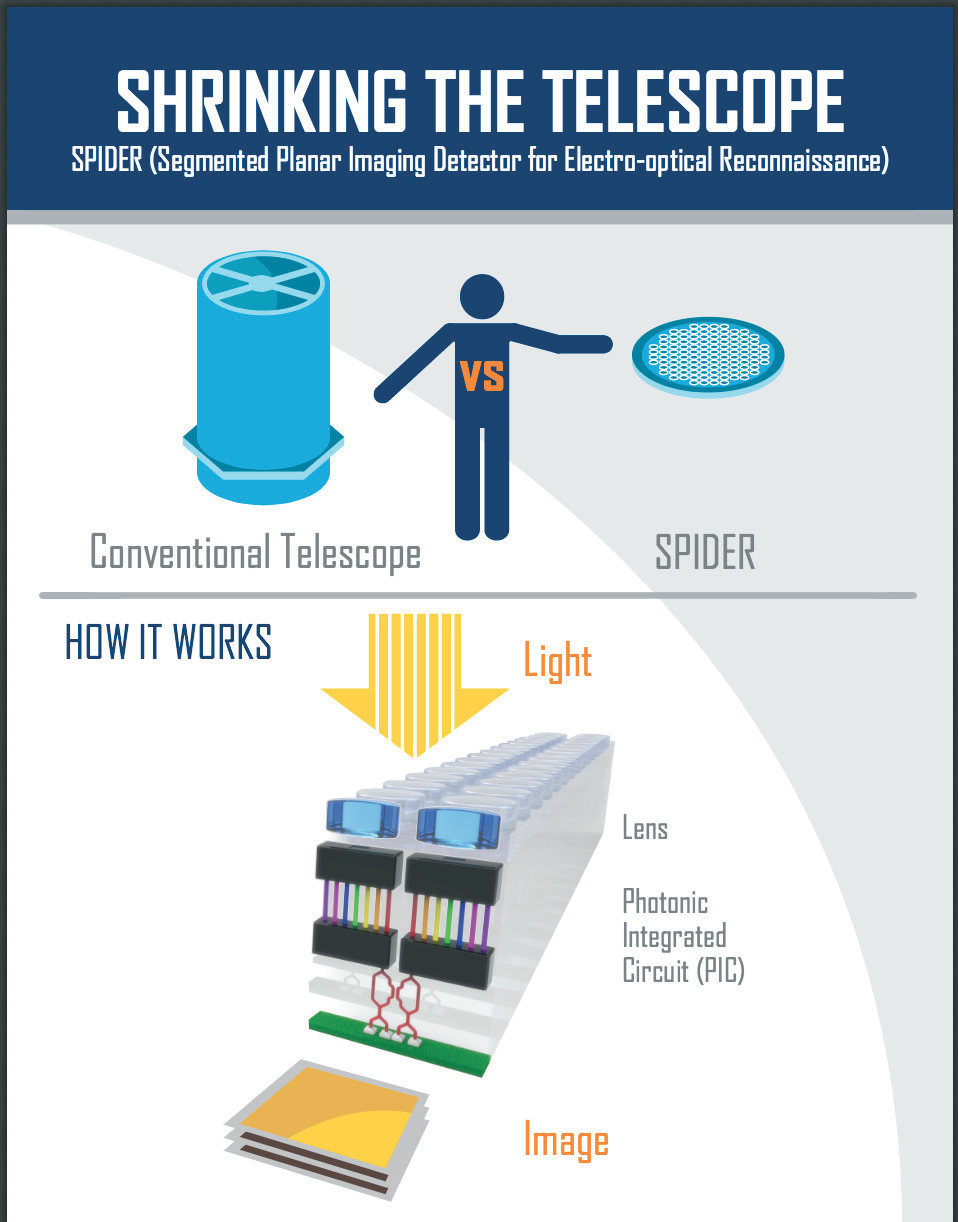 “We can only scale the size and weight of telescopes so much before it becomes impractical to launch them into orbit and beyond,” said Danielle Wuchenich, senior research scientist at Lockheed Martin’s Advanced Technology Center in Palo Alto, California. “Besides, the way our eye works is not the only way to process images from the world around us.”

In order to shed pounds on future telescopes, scientists at Lockheed Martin are taking a new look at how to process imagery by using a technique called interferometry. Interferometry takes in what you’re seeing, photons, using a thin array of tiny lenses that replaces the large, bulky mirrors or lenses in traditional telescopes. Large-scale interferometer arrays, located in observatories around the world, are used to collect data over large periods of time to form ultra-high-resolution images of objects in space.

SPIDER flips that concept, staring instead from space, and trading person-sized telescopes and complex combining optics for hundreds or thousands of tiny lenses that feed silicon-chip photonic integrated circuits (PICs) to combine the light in pairs to form interference fringes.

The amplitude and phase of the fringes are measured and used to construct a digital image. This provides an increase in resolution while maintaining a thin disk. It’s a revolutionary concept analogous to the idea that helped replace your bulky old television with a thin display that can hang on your living room wall. 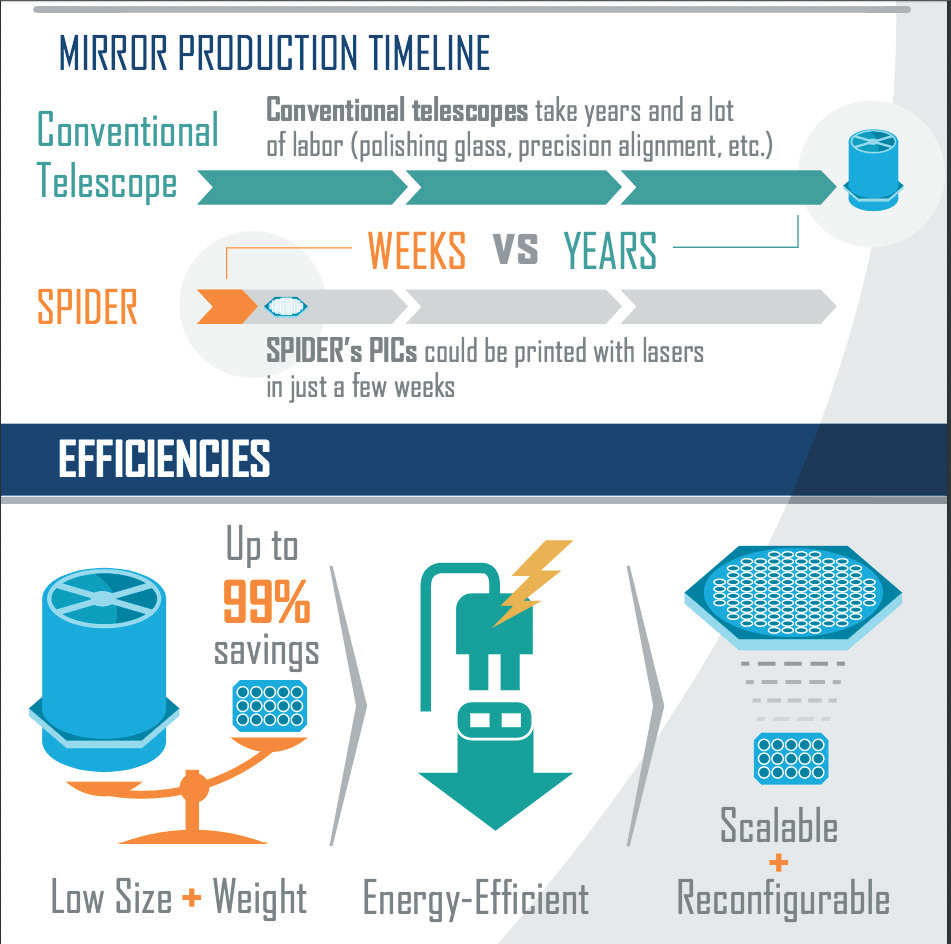 This is also how Lockheed Martin’s imaging technology, called Segmented Planar Imaging Detector for Electro-optical Reconnaissance (or SPIDER), could reduce the size, weight and power needs for telescopes by 10 to 100 times. This concept could make a big difference for commercial and government satellites alike.

“What’s new is the ability to build interferometer arrays that have the same number of channels as a digital camera,” said Alan Duncan, senior fellow at Lockheed Martin. “They can take a snapshot, process it and there’s your image. It’s basically treating interferometer arrays like a point-and-shoot camera.”

SPIDER’s photonic integrated circuits do not require complex, precision alignment of large lenses and mirrors. That means less risk on orbit. And its many eyes can be rearranged into various configurations, which could offer flexible placement options on its host. Telescopes have always been cylindrical, but SPIDER could begin a new era of different thin-disk shapes staring in the sky, from squares to hexagons and even conformal concepts.

Duncan’s team, which includes Wuchenich, is developing this capability in the heart of Silicon Valley at the Advanced Technology Center. This is also the home of the Optical Payload Center of Excellence, which brings together the collective expertise of Lockheed Martin’s space observation professionals. Alan and other scientists form the research base of the center so that one day, developmental technologies like SPIDER could be an option on production spacecraft. 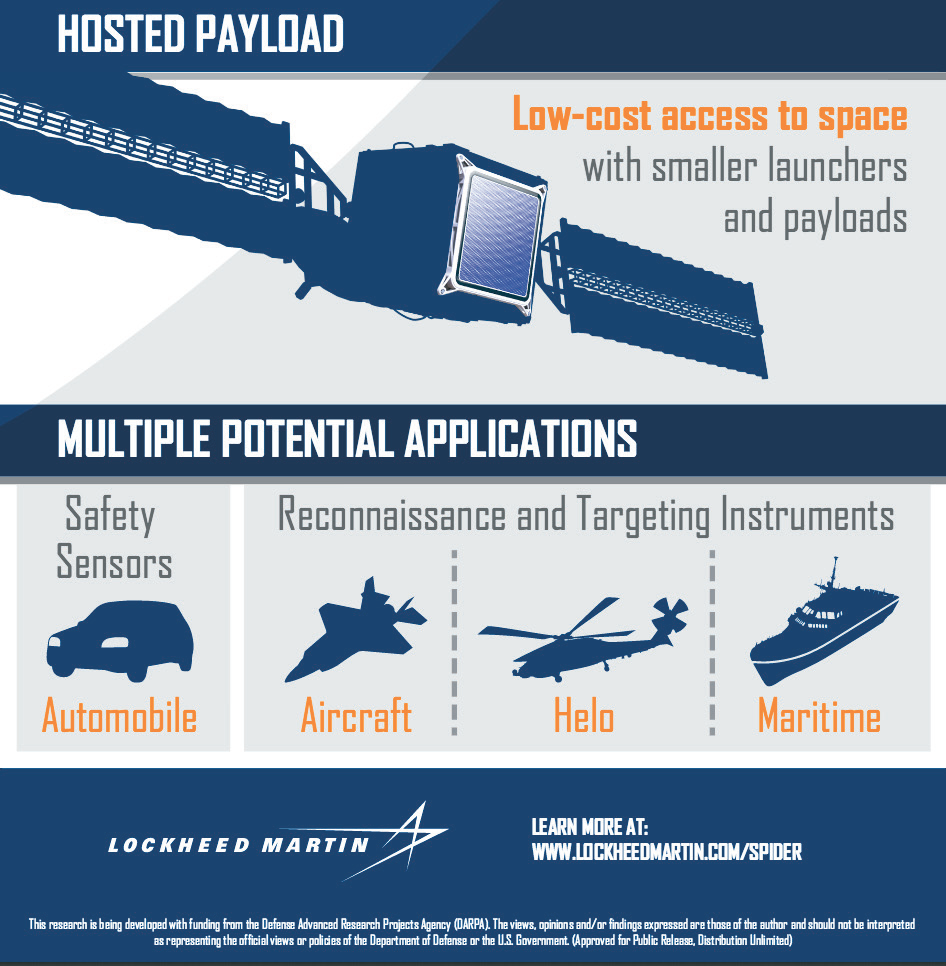 The Future Looks Bright (And Light)

Developed with funding from the Defense Advanced Research Projects Agency (DARPA), the SPIDER design today is still in its early stages. It uses just several lenses and their associated PICs developed by Lockheed Martin’s research partners at University of California, Davis. Despite the technology’s advances, Duncan predicts SPIDER’s capabilities could still be five to ten years away from being fully matured.

However, the team envisions a future where a telescope could be scaled up to serve in a similar capacity as telescopes that are currently photographing the planet, and at a fraction of the cost. In fact, SPIDER could even be able to operate on a spacecraft as a hosted payload, where it could simply be mounted to the side of a vehicle with minimal size, weight and power impact.

“SPIDER has the potential to enable exciting discoveries by putting high-resolution imaging systems within outer planet system orbits such as Saturn and Jupiter,” said Duncan. “The ability to reduce size, weight and power could significantly change the game. With 10 to 100 times the resolution of a comparable-weight traditional telescope, imagine what you could discover.” 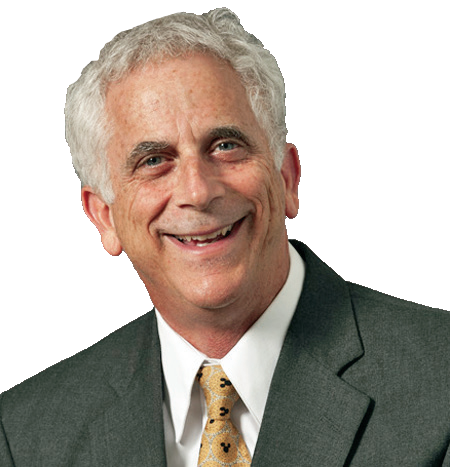 Dr. Duncan has overall responsibility for the technical oversight of EO systems projects at the LM Advanced Technology Center. Dr. Duncan received his PhD in Physics from the University of Colorado.