I recently witnessed a demo by the Belgian naval force where they tested different types of autonomous and unmanned vehicles for their mine counter measure (MCM) operations. 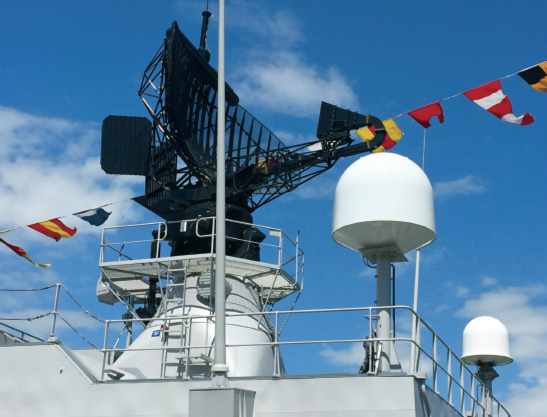 Thanks to these unmanned MCM modules, crew safety can be increased as mine hunting vessels can remain at the outside of a minefield.

For decades clearing mines was a dangerous and close-up business. Specialized ships, divers and even trained dolphins had to go right into the minefield.

Today, mine hunter operators will send unmanned robotic assets into the minefield under water and on the surface. These unmanned systems will typically carry a variety of sonars, cameras, sensors and target recognition systems to perform these mine counter measure operations.

MCM Operations & Satellite
How are MCM operations and satellite communications related? Unmanned submarine vehicles do not have the form factor to carry SATCOM terminals nor antennas. They mostly operate under water and at the bottom of the sea and typically use underwater acoustic modems.

These acoustic modems transmit up to 40 kbit/s sensor video and data from the unmanned system to the unmanned surface vehicles (USV) inside the minefield or to a gateway at the border of the minefield. The reach of these modems is only 1,000 to 2,000 meters before the signal starts to fade. Satellite communications will be used on board these gateways and USVs when operating in Beyond-Line-Of-Sight (BLOS) MCM missions. 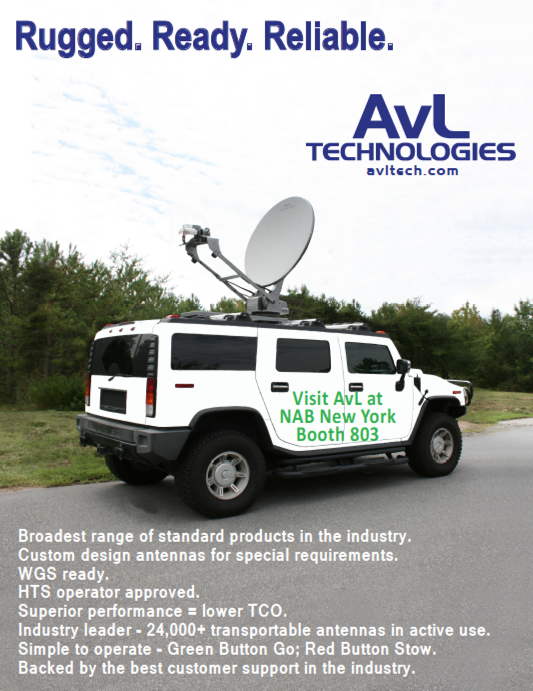 In a typical set-up, an MCM vessel should be able to simultaneously control remote mine-hunting systems looking for mines and one USV sweeping them. Meanwhile, the MCM vessel stands back at a safe distance from not only the minefield but also from any nearby enemy forces.

As the sensors and the cameras onboard these unmanned vehicles become more powerful to reveal more granularity and details to the MCM operator the data rates will increase substantially. Most of the RMMVs and USV have local storage capabilities but in dangerous missions a situational awareness live link is required.

The operator on board the MCM vessel will process the incoming sensor data and video and guide the unmanned devices into the minefield. They depend on reliable, secure and efficient communications to successfully complete their missions.

However, a chain is only as strong as its weakest link. If the satellite link fails or does not provide enough throughput, the entire operation can go adrift and expensive RRMV or USV gear can get lost.

The Bandwidth Bottleneck
Naval mission operators are regularly confronted with SATCOM bandwidth bottlenecks that force them to reduce the scope of their missions or complete their operations in an ineffective way. High detail images and sensor data should be provided to the MCM operator to distinguish mines from rubbish drifting in the sea.

Furthermore, satellite links are used to exchange tactical, situational and ISR information between vessels and the headquarters. Welfare and e-health programs have equally been made part of the SATCOM communication package.

Different programs were introduced onboard the navy vessels in order to recruit young personnel that were born in the digital age and to respond to e-health requirements imposed by navy unions. For the last few years naval vessels have been pushing the limits of existing satellite platforms.

Until now, navy vessels and USVs were forced to rely on low-end TDMA services or expensive narrow-band and SCPC circuits that lacked the performance and flexibility to meet their needs. Today, the satellite industry is enjoying a period of unprecedented growth and innovation both in the space and the ground segment. 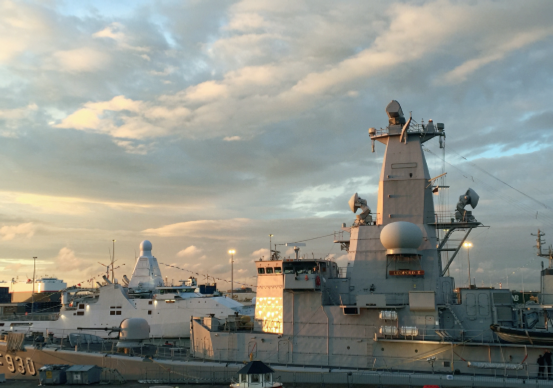 With the advent of HTS, nexgen VSAT systems and electronically steerable flat-panel antennas, the promise of ubiquitous, high-speed connectivity is closer than ever. HTS will provide significantly more capacity at lower costs, dramatically improving the user experience.

First-generation VSAT platforms brought important innovations like beam switching, Quality of Service (QoS), uplink power control, and dynamic bandwidth allocation. Unfortunately, as most of those features operated independently, with primitive logic, the combined results were unpredictable and difficult to manage at scale. Also, the early VSAT modems did not bring the throughputs that were required by bandwidth-hungry applications onboard naval vessels and USVs.

Beam switching logic must become multidimensional, allowing network operators to continually manage factors like load balance, regulatory restrictions, cost and weather. With the advanced beam-switching engine called the Newtec Dialog Mobility Manager, all aspects of beam switching will be orchestrated through a central process at the hub location.

The efficiency of the satellite link has an immediate impact on the efficiency of the naval operations. Link efficiency translates in to higher throughput and maximum service availability. The powerful DVB-S2X forward and Newtec MX-DMA® return waveforms onboard the Newtec Dialog platform already increase throughput rates by 30 to 50 percent in the same satellite bandwidth when compared to legacy TDMA and SCPC systems. 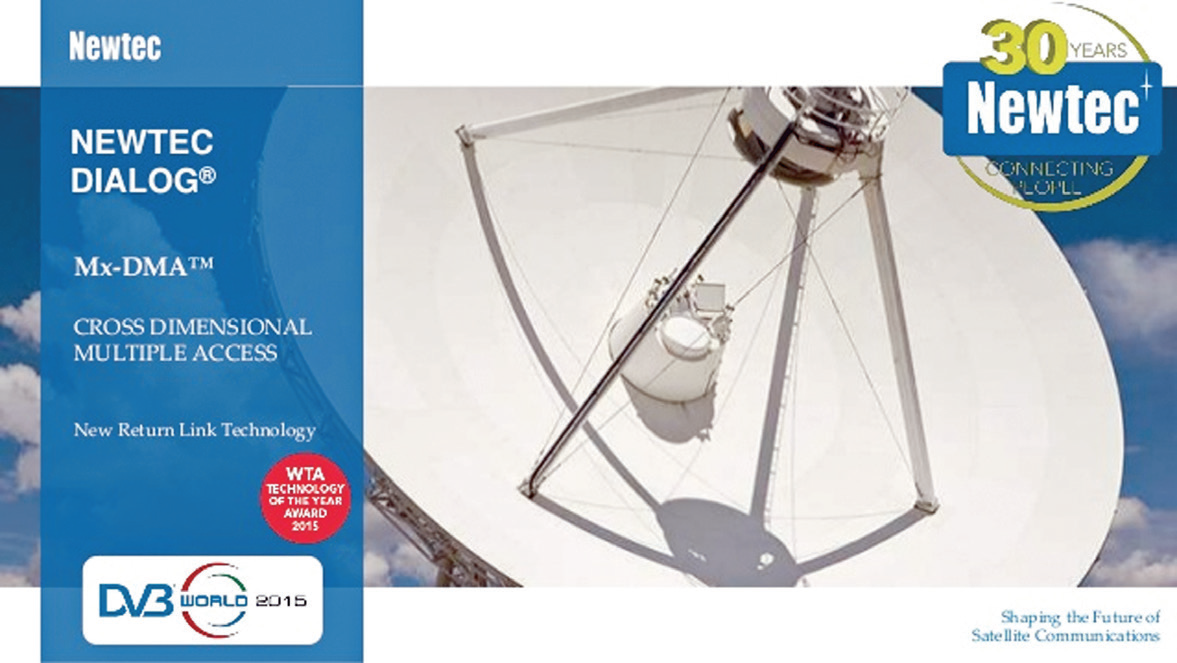 As such, an operator of naval networks has the choice to increase throughput rates, maximize service availability, grow user-experience, cut the gained bandwidth and allocate budgets to other naval applications or a combination of these elements.

Innovative technology such as seamless beam switching and the highly resilient Newtec Mx-DMA return waveform go hand in hand with market proven technology, such as Newtec’s FlexACM®, in order to maximize the service availability. In adverse conditions such as rain fade, interference and shadowing effects, the satellite link needs to be maintained for mission critical communications.

If traffic patterns or link conditions change, the Newtec Dialog VSAT platform will adapt these satellite links in a seamless, dynamic and efficient manner. Losing the link or dropping packets is not acceptable as it could endanger naval missions and human lives.

With the Newtec Dialog platform operators of naval networks have the possibility of connecting multiple platforms (such as MCM vessels, USVs, frigates, command ships, aircraft carriers etc.) to a single hub for regional operations or to a global network on a single platform. Modem types, throughput rates, QoS and priorities can be flexibly adapted according to the type of naval platform.

Deploy Anywhere, Anytime
The global maritime domain and the role of naval power have changed significantly in recent decades. Navies around the world are regularly doing things for which they were not designed. Naval forces are finding themselves increasingly engaged in enforcing sanctions, chasing pirates, interdicting narcotics and providing humanitarian support.

The modern context translates in to complex operating environments. With the introduction of new technologies such as unmanned multi-purpose and MCM vehicles, as well as the growing importance of welfare and healthcare programs onboard the vessels, navy operations have become increasingly dependent on satellite communications.

However, a chain is only as strong as its weakest link. If the VSAT system does not meet the throughput and QoS requirements or if the VSAT platform is not adapted to the complex naval operational environment, it will impact the efficiency and effectiveness of these naval missions in a negative way. 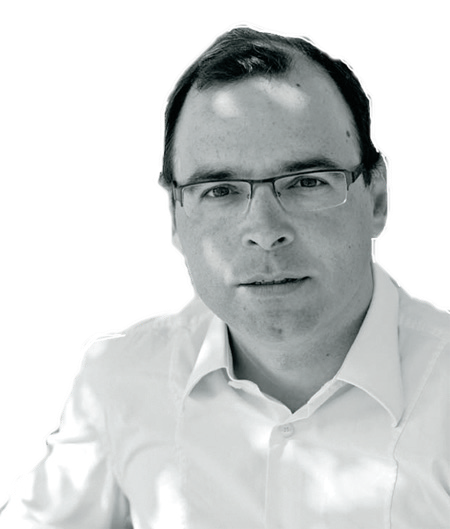 Koen Willems holds the position of Market Director for Government, Defense and Humanitarian SATCOM for Newtec, a Belgium-based specialist in satellite communications. He is responsible for global market and business development, strategy and Newtec technology evangelization.

Koen is also vice-president for the Belgian Security and Defense Association with the main objective to represent, safeguard and promote member companies in Belgium and abroad. 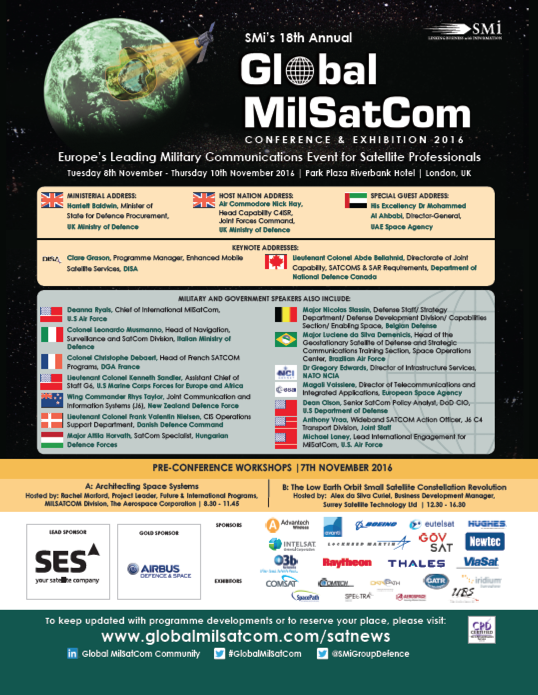