Increasingly, military forces around the world require constantly connected high data throughput communication capabilities when in the field. High quality video streaming and data backhaul are necessary not only for situational awareness and information gathering but also for welfare comms and internet access for personnel. It follows that the easier it is to use this equipment then the more effective and successful it will be.

Paradigm’s guiding principle of simplifying satellite communications has enabled this type of technology to be much more accessible to the mobile soldier. More specifically, Paradigm has made huge advances in simplifying the setup and pointing processes, and in modularizing terminals for rapid deployment.

Paradigm’s HORNET terminals in use during their deployment in Burkina Faso during U.S. Africa Command's Operation Flintlock.

A significant step forward has been to remove the need for trained SATCOM engineers who were previously required to setup, point and operate satellite terminals, the result being that satellite communications can become as ubiquitous as the smartphone. Paradigm’s developments mean that less training is now required to enable the setup of reliable communications in any location and to provide higher bandwidth than previously available from other comms equipment with comparable training requirements. This translates into soldiers and mobile units who can then focus more easily and quickly on the task in hand, with the confidence that their communications kit is delivering high bandwidth in both static and on-the-move situations, anywhere in the world. 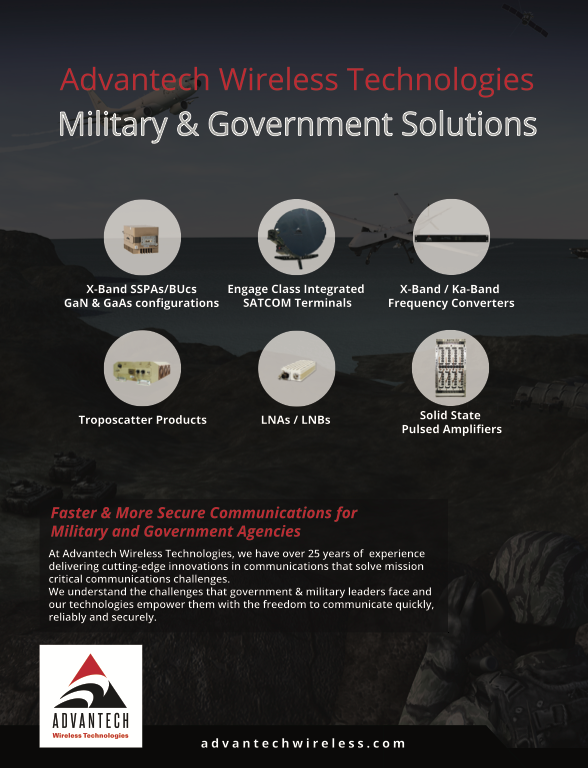 The success of Paradigm’s ongoing simplification of SATCOM has been based on the development of the PIM® — the Paradigm Interface Module — an environmentally rugged terminal controller designed to provide a common level of operation to all satellite terminals. Its simplicity and ease-of-use has made it extremely popular and led to it being integrated into many non-Paradigm terminals to also enable quick and rapid access to key satellite constellations and networks.

The PIM minimizes training because it is straight forward to use and because it is integrated into so many different terminals, each of which adopt the same straightforward pointing process. It makes it easy for non-skilled users to setup and point a satellite terminal, simplifying a process to one that only requires basic training at most. Actions such as pointing the terminal, getting it operational on a satellite and transmitting and receiving data can now take less than a minute to perform, with the user guided by easy-to-follow, simple instructions delivered via the PIM’s basic unit interface.

To assist the operator to point the satellite terminal, the PIM provides all the required cues using the on-board control interface; no spectrum analysers, laptops, PC’s or external equipment is necessary. The user follows straightforward visual guidance, with optional audio guidance available. These simple-to-follow instructions are all that’s needed to enable rapid, accurate terminal pointing.

The ruggedized PIM represents an easy-to-use interface across many different satellite terminals, thus enabling Defence Forces to standardize on equipment. Additionally, the technical agility and versatility of the PIM allows it to be integrated with all types of SATCOM terminals and modem technologies; so other manufacturers can, and do, use it as the brain of their system, further standardizing the process of satellite communication. The PIM’s array of integrated modem technology also allows for a military level encryption feature, adding over-the-air security, but maintaining all the simplicity of pointing and rugged operation. By reducing the training requirements and reducing the differences between terminals down to situational and environmental use driven features, Paradigm has created a range of VSATs that meet every operational need. 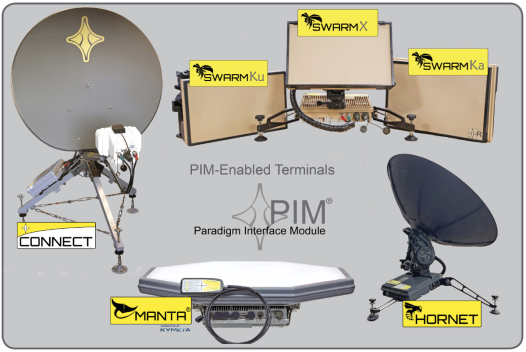 The PIM optimizes the ease-of-use and commonality of the Comms-On-The-Move (COTM) and Comms-On-The-Pause (COTP) MANTA terminal and is an integral part of ultra-portable, backpackable terminals, such as the SWARM®. However, it also has a key role to play in systems designed for longer term setups such as Paradigm’s HORNET and CONNECT100T terminals. The HORNET terminals use segmented, carbon fiber antennas and are compact and rugged. Deployment is straightforward and does not require any tools. Similar to all PIM-enabled terminals, pointing is simple and fast.

The HORNET terminals already have a solid track record of field deployments. During 2019, HORNET terminals were deployed in Burkina Faso during Operation Flintlock, the U.S. Africa Command's premier special operations forces exercise. Approximately 2,000 personnel from more than 30 African and western nations participated in the operation and the HORNET was used to keep the mix of multinational soldiers connected to family and friends throughout.

At the same time on the other side of the world, HORNET terminals provided fast, reliable and critical communications for the Argentine Antarctic Summer Campaign. Both crew and scientists at the bases and on board the icebreaker vessel benefitted from the high speed internet access providing both welfare comms and data transfer for operational activities such as the transfer of up-to-the-minute maps of navigation routes and meteorological information. 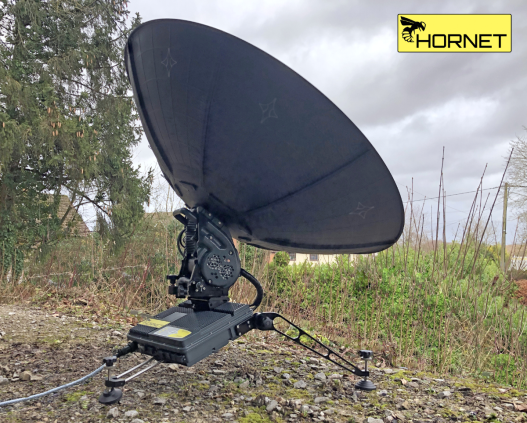 The latest edition of the HORNET has been optimized to provide an interchangeable, modular solution to increase flexibility and efficiency for the user. It is lightweight and crucially can now be packed into a single IATA compliant case or backpack. Its modularity allows the user to interchange between different sized antennas, RF modules and frequency bands to give a single communication node for multiple operational requirements. These single case HORNET terminals are designed to balance high-speed data throughput with portability. Maintaining the courier-friendly and airline compliant case design, the HORNET terminals provide a positive balance between lightweight, rugged and data throughput.

This extends the advantage of standardization the PIM brings to even greater lengths. By adopting the HORNET, the same simple-to-use terminal can be configured for X-, Ku-, Ka- and Mil-Ka frequency bands over 60, 80 and 100 cm. antennas with a range of RF modules. Operations can thus continue seamlessly as locations, network coverage and link budgets evolve.

As an example, a short, info-gathering mission to a remote location can be supported with the smaller 60 cm. aperture on a low power and low frequency configuration. This will enable the team to remain connected to their chain of command for situational awareness via voice calls and small data files.

For an extended and more complex operation where the communications setup requires a higher data throughput and improved cost efficiency, the antenna and RF module can be swapped out for the larger 80 or 100 cm. on a higher Ku- or Ka-Band frequency. Now the unit can reliably and safely transmit hi-res photos and full motion video files as well as providing internet access and email services for the soldiers. The antenna size, multi-RF and complete multi-power flexibility of the terminal are thus able to support all link budget requirements.

All Paradigm terminals have been field-proven in theater from operations in the desert providing broadcast quality video network connectivity, to operations at extreme altitude in ultra-cold temperatures to maintain welfare data communications channels. They provide simple, easy to use VSAT setups, tried and tested, with standardized operations across all of the major satellite operators. Paradigm maintains close working relationships with partners and key customers to deliver enhancements and developments for all their terminals to suit any specific requirements.

Paradigm regularly supports both commercial and military events and exhibitions around the world, with the range of PIM-enabled terminals and Paradigm’s terminal design and engineering capability all on display.

The website — www.paracomm.co.uk — is always up-to-date with details of these. Additionally demonstrations can be arranged for key global locations by contacting the firm’s sales team at sales@paracomm.co.uk.

Author Ulf Sandberg is the Managing Director at Paradigm Communications Systems Ltd., based in Alton in the United Kingdom.