Smile... Russia Successfully Launches Another ‘Eye In The Sky’

On March 14, 2016, a Russian, civilian-operated, Earth Observation (EO) satellite, Resurs P3, blasted off at 1856 GMT (2:56 p.m. EDT) from the Baikonur Cosmodrome in Kazakhstan on a five-year mission, giving Russia a fleet of three advanced digital imaging spacecraft in orbit. 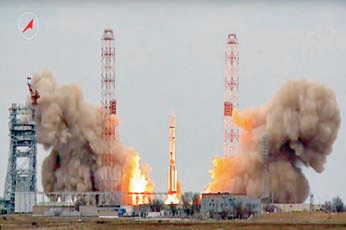 The launch was delayed due to an automatic abort that was triggered moments before ignition of the Soyuz rocket’s engines that halted the countdown. Such launch scrubs late in the countdown are rare for the nearly six ton Soyuz workhorse.

The satellite’s Soyuz booster steered north from Baikonur and dropped its four, first stage engines about two minutes after liftoff. The second stage core engine and a third stage propulsion system delivered the Resurs P3 satellite to a preliminary orbit about 9 minutes, 21 seconds into the flight, according to a statement by Roscosmos, the Russian space agency.

The Baikonur Cosmodrome is a busy place, as the European-led Mars mission, ExoMars, lifted off the day after Resurs P3.

Resurs P3 will collect black-and-white imagery with a resolution of 1 meter, or 3.3 feet, and analysts will resolve objects as small as 3 to 4 meters (10 to 13 feet) across in color pictures.

Russian government agencies responsible for agriculture, the environment, emergency situations, fisheries, meteorology and cartography will be consumers of data from Resurs P3, which will join two similar satellites—Resurs P1 and Resurs P2—

launched in June 2013 and December 2014, respectively. A telephoto camera with a focal length of 4,000 millimeters will capture the highest-resolution images.

Manufactured by TsSKB Progress, a company based in Samara, Russia, the 5,730-kilogram (12,632-pound) Resurs P3 satellite hosts a suite of digital cameras.

One camera is tuned to image the Earth in 96 spectral bands, obtaining details on metrics such as crop yield, vegetation health, microbial activity in water, and assessing the impacts of invasive insects on agriculture.

The launch photo of Resurs P3 is courtesy of Roscosmos. 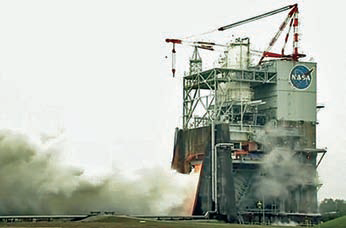 The Space Launch System (SLS) is America’s next-generation heavy lift launch vehicle, and it will be capable of lifting three times more payload capability than any existing launch vehicle. Aerojet Rocketdyne is the prime contractor for the RS-25 core stage engines that will be used to propel SLS on its eight-minute climb into space.

Engine E2059 is slated to fly on the bottom of the core stage of SLS on its second flight, planned for 2021. Four other flight engines will undergo stage testing by late 2017 in preparation for the inaugural Exploration Mission-1 launch in 2018.

NASA engineers at Stennis Space Center tested RS-25 engine No. 2059 on the A-1 Test Stand this week. This was the first flight engine for NASA’s new rocket, the Space Launch System (SLS), to be tested at Stennis.

In addition to testing the new controller, numerous other test objectives were successfully conducted, including testing of a rebuilt high pressure fuel turbopump, calibration of facility and engine flowmeters, and testing in conditions replicating flight environments.

Last year, Aerojet Rocketdyne completed more than 3,700 seconds of testing on the first RS-25 development engine to confirm that the engines can withstand the demanding operating conditions of flight, as well as the performance of the new controller. These engines must operate in a temperature extreme from negative 423 degrees Fahrenheit to 6,000 degrees Fahrenheit and at pressures exceeding 7,000 pounds per square inch. 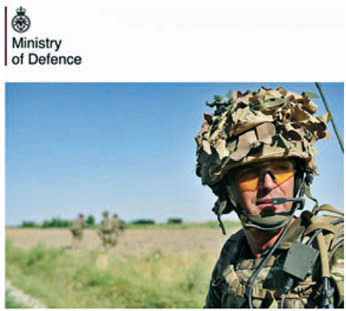 The BCIP5.6 contract will allow for the Bowman tactical communications equipment currently used by the UK military to receive a series of enhancements and upgrades. These include the roll-out of approximately 12,000 new data terminals and an updated version of the Battle Management System.

The contract creates 50 new jobs as well as sustaining the jobs of 20 highly-skilled engineers at the General Dynamics UK’s headquarters in Oakdale, South Wales, with further roles being secured in the company’s wider supply chain.

Bowman’s secure radio communications, declared in service in 2004, have been used in operations since 2005. The Bowman system has been developed and integrated by General Dynamics UK into more than 15,000 British Army vehicles, together with headquarters, ships and helicopters. The enhanced equipment will be delivered, beginning in 2018, and will support an increased operational tempo.

Defence Secretary Michael Fallon said, “This is more evidence of what this Government’s decision to grow our Defence budget can do for the UK. It will create highly skilled jobs in Wales and help our Armed Forces to keep Britain safe for years to come.”

Brigadier Richard Spencer, Head of the MOD’s Battlefield and Tactical Communications and Information System delivery team said, “This contract will replace the data terminals and update software across the Bowman system to ensure ease of use, more rapid and robust data services and improved interoperability. This new deal is good news for the Armed Forces and ensures that they will have access to the best possible tactical communications equipment for the foreseeable future.” 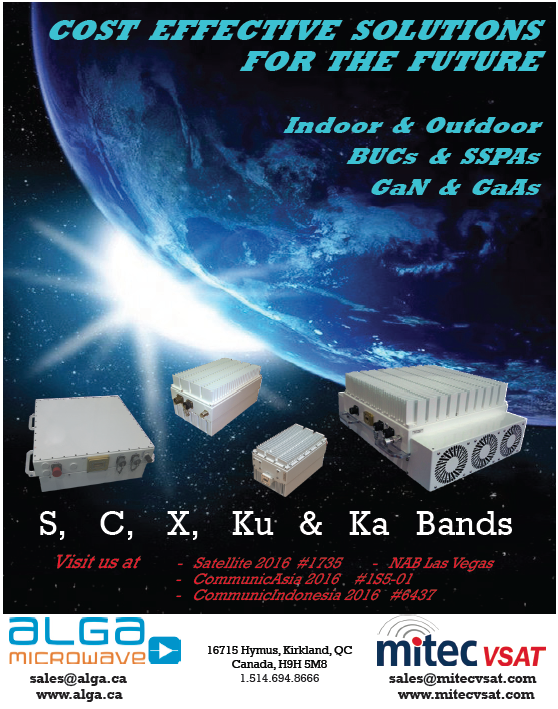 Chief Operating Officer of General Dynamics UK, Steve Rowbotham, said, “This contract ensures the British Armed Forces have access to the best tactical communications. We are delighted to continue our successful partnership, which has delivered world-class secure tactical communications to the British Armed Forces, and to build on this unique UK sovereign capability.”

“UltiSat provides a diversified portfolio of complex services and solutions to the government sector. Awards similar to this most recent CTC will allow us to manage and support end-to-end satellite communications solutions for our government customers in the demanding market of airborne ISR,” said Amy Gwinn, UltiSat’s Senior Vice President of Government Solutions.

Having A Ball With “Green” Propellant

The NASA Green Propellant Infusion Mission (GPIM) seeks to demonstrate and test the capabilities of a high-performance, non-toxic, “green” fuel on orbit. 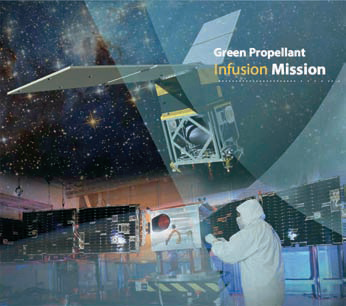 This the first time the nation will use a spacecraft to test green propellant technology.

The propellant for this mission is a Hydroxyl Ammonium Nitrate (HAN) fuel/oxidizer blend, or AF-M315E.

Developed by the Air Force Research Laboratory (AFRL), it offers nearly 50 percent higher performance for a given propellant tank volume compared to a conventional hydrazine system.

The Ball Aerospace team will develop and fly the GPIM to demonstrate the new fuel and an integrated propulsion system that uses green propellant in space.

The GPIM payload will fly aboard the Ball Configurable Platform (BCP) 100 spacecraft bus.

The BCP 100 is ideally suited for scientific, technology development, and risk reduction payloads like the GPIM.

The GPIM will be developed over three years and is expected to launch in 2016.

Ball Aerospace is the prime contractor for GPIM. A principal investigator from Ball Aerospace will lead the demonstration of the alternative fuel for future space vehicles. GPIM team co-investigators include the Aerojet Corporation, NASA Glenn Research Center, and the U.S. AFRL at Edwards Air Force Base, with additional mission support from the U.S. Air Force Space and Missile Systems Center at Kirtland Air Force Base and NASA’s Kennedy Space Center.

In addition to the promise of higher performance for future satellites, the fuel’s exceptional volumetric storage properties is also being examined for military uses such as missile launches and auxiliary power units that currently use hydrazine.
ballaerospace.com/

In a windowless room, illuminated only by the light of computer screens, the Airmen of the 455th Expeditionary Operations Support Squadron intelligence flight at Bagram Air Field in Afghanistan, paints a picture of the battlespace clear as day. 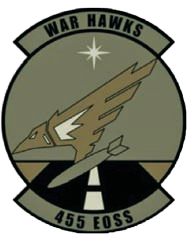 With intelligence gathered from multiple platforms, from ground forces to satellites, the unit collects, analyzes, and formulates up-to-date reports for commanders to make critical decisions where lives are sometimes on the line.

“Intelligence informs operational planning based on the commander’s needs and the particular military objective, increasing chances for success,” said Tech. Sgt. Jarom Saurey, 455th EOSS intelligence flight superintendent. “Analysis reports draw on all available sources of information, including existing and newly collected material. These reports are used to inform and influence the planning staff and seek to predict the adversary’s intent.”

In order to meet this goal, Intel AFSCs use several scientific and mathematical processes, such as using geo-locational mensuration functions, historical trend analysis, and manipulating geospatial databases. While it may sound like a Ph.D. in rocket science is needed to decipher these techniques, the 455th EOSS intelligence flight Airmen, find parallels in a simpler explanation.

“A good analogy of what Intel does is similar to the weather flight,” said Maj. Joseph Shupert, 455th AEW senior intelligence officer. “We are both analysts who collect and interpret data that we can’t control, determine what it means to air operations, and present the combined data and assessment to aircrews and leaders to ensure mission execution.”

From the squad leader protecting the base from the ground, to the F-16 Fighting Falcon pilots conducting strikes from the air, every mission in Afghanistan is reliant upon good, up-to-the-minute intel.

Manpacking Maneuvers By Harris For The US Army

Harris Corporation was one of three awardees of a multi-award IDIQ contract to supply HMS Manpack radios to the
US Army.

The IDIQ contract consists of a five-year base and an additional five-year option and has a ceiling of $12.7 billion.

The Army expects full rate production to start in the fourth quarter of Harris’ fiscal 2017 and will acquire approximately 65,000 HMS Manpack radios under the IDIQs.

The US Army selected the Harris AN/PRC-158 multichannel radio for both dismounted and mounted manpack configurations.

The HMS (Handheld, Manpack & Small Form-Fit) Manpack forms the core of the US Army’s tactical communications architecture, providing an advanced communications infrastructure from the dismounted soldier to the Tactical Operations Center.

The selection follows the US government’s decision to open the HMS Manpack competition to technically compliant, commercially developed radios, and further solidifies the U.S. Army’s commitment to bring future capabilities to the warfighter.