O3b mPOWER will complement the existing multi-orbit fleet of Medium Earth Orbit (MEO) and Geostationary Earth Orbit (GEO) satellites that SES already operates. It will give the U.S. Department of Defense customers a new tool in enabling digital and network-connected platforms.

In fact, the O3b mPOWER capabilities provide an advantage for a number of use cases across practically every domain of operation — including land, sea and air.

Within the air domain, there are multiple, disparate platforms of operation that all have unique requirements. Each of these three platforms — unmanned aerial vehicles (UAVs), transport aircraft and manned aircraft — can benefit from the advanced capabilities that will be enabled by O3b mPOWER.

Government Satellite Report (GSR)
What process is currently in place for getting ISR data from UAVs? Can the data be collected and delivered in real-time? 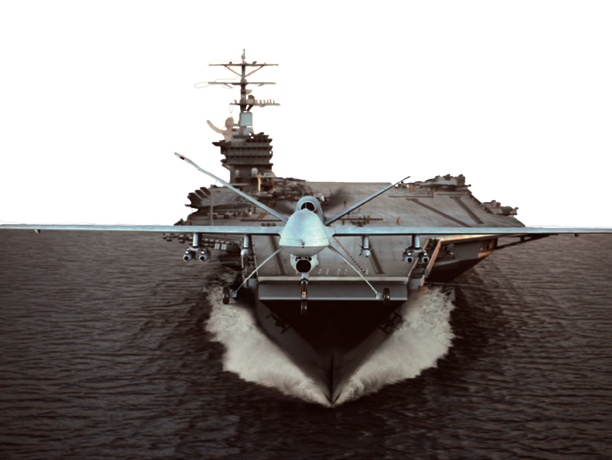 Eric Gunzelman (EG)
There are currently multiple methods for uploading data from a UAV that range in sophistication and speed. There are sophisticated, point-to-point links via air-to-ground or air-to-satellite-to-ground. There are also less sophisticated methods that involve landing the plane in order to access and subsequently ship a hard drive.

Mike Blefko (MB)
When it comes to ISR data, timely delivery is of the utmost importance. The more recent the intelligence information is, the more accurate it is, and the better it is for situational awareness, mission planning and mission command. Ideally, decision makers would get access to quality ISR data — such as HD video — in real-time so that it is up-to-date and reliable.

That’s why the process that Eric described of landing a UAV and physically shipping a hard drive is not ideal —– since the data — much of which is comprised of multiple large files — needs to be accessed in real-time.

GSR
What types of sensors are found on ISR UAVs? How much data do they produce? How has this changed in recent history?

MB
There are numerous sensors on UAV platforms. The number of sensors has increased over the years as electronics have miniaturized. These sensors can include visual, infrared, optical and other airframe state-of-health sensors.

EG
That’s something that I think is important to realize: sophisticated ISR sensors have exponentially increased the amount of data that needs to be offloaded from the UAV.

In fact, I recently read an Avascent industry briefing that showed the total number of UAVs and the total data rate from those UAVs will both double between 2015 and 2025. That’s going to require a lot more bandwidth. 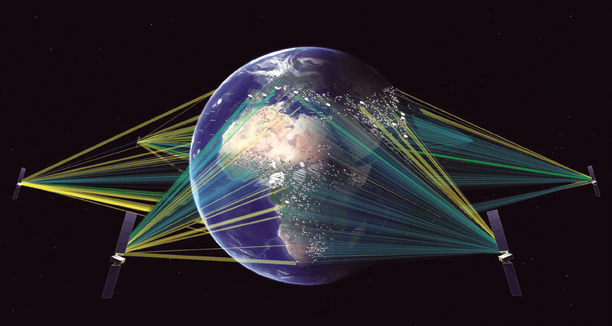 Artistic rendition of the SES O3b constellation. Image is courtesy of the company.

GSR
How are the connectivity requirements of UAVs different from other aircraft?

MB
While many aircraft are strictly being pushed information, UAVs are typically collecting data locally and then sending it via the uplink path back to the base. They need just as much uplink capacity as they need downlink capacity.

This is why O3b mPOWER is such an effective solution for UAVs, specifically. Unlike other satellite networks, O3b mPOWER provides a significant upload path to address these types of applications.

GSR
Aside from the larger uplink capacity, what else about O3b mPOWER makes it a good solution for UAVs?

This means that large file transfers and voice communications will experience less than 150 milliseconds of latency roundtrip. Low latency coupled with high throughput and O3b mPOWER’s ability to dynamically allocate bandwidth and power in near-real-time while flying a mission enables mission planners to decide to use all of the sensors, part of the payload or reconfigure sensors in-flight, as dictated by the mission requirements.

The result is a higher level of flexibility to adapt to the changing mission requirements as well as faster transmission of voice, video, including UHD, and data packets that do not need to be compressed.

GSR
How does O3b mPOWER compare with the original O3b constellation? What additional benefits will O3b mPOWER deliver?

MB
With O3b mPOWER, we scale the proven concept of MEO, that we are currently delivering to our customers. Both the O3b mPOWER and the current O3b satellites are stationed at MEO, so the latency is the same.

However, the wider bandwidth and channelization on O3b mPOWER allows up to 2500 MHz of bandwidth to be delivered – that’s about ten times more data for the same sized terminal when compared to the original O3b MEO satellites.

GSR
What type of connectivity is available on manned military transports and refueling planes today?

EG
In terms of applications, defense and security users are primarily focused on enabling access to mission-critical services and applications enabling information sharing and decision-making. This requires higher bandwidth coming off the aircraft, and not just data to the aircraft.

GSR
You’ve mentioned that these applications need to both send and receive data, but what are they, specifically? What types of use cases and applications could there be for high-bandwidth satellite connectivity on military transports and refueling planes?

EG
All modern widebody military aircraft provide capabilities that go beyond their standard mission sets — such as long-haul transport or refueling missions.

Then there are the VIP Special Air Missions (VIPSAM), which involve transporting senior government officials. These individuals have important jobs and would benefit greatly from having the same access to communications and applications en route as they do in their offices. This way, they’re capable of informed decision-making and mission planning even if they’re in transit.

GSR
Why is O3b mPOWER a good solution for widebody aircraft?

MB
Satellite constellations at MEO inherently offer lower latency than GEO satellites. It basically comes down to distance.  GEO is further away than MEO by a factor of four, or in other terms, MEO communicates in a quarter of the time that it takes to get data through GEO.

Being comprised of next-generation MEO satellites, the terabit-scale O3b mPOWER system will offer extremely fast, low-latency connections for widebody aircraft, regardless of their communications requirements.

Finally, the low latency nature of O3b mPOWER enables more real-time based processes, such as cloud-based services. This can help to relieve downrange operators of maintaining their own forward deployed network and make other cloud services accessible to users.

EG
In addition to that unprecedented high throughput and low latency, O3b mPOWER uniquely offers the customer flexibility and adaptability.

Customers can create their own federated secure networks within this O3b mPOWER network; they can route their beams from one terminal to another or to their own gateway and shape their beams to put energy just where they want it; they can respond to contingencies more rapidly than ever before and do all of this with inherent jamming resistance thanks to the design of the narrow beams, the moving nature of MEO satellites, frequency diversity and polarization diversity.

Also, O3b mPOWER offers a significant upload path. This means that it’s well-suited to address the upload and download requirements of military communications and applications.

For additional information about O3b mPOWER and the benefits that it can deliver to the military, select this direct infolink.
ses-gs.com/govsat/#

This article first appeared at SES-GS GovSat and is republished with their permission.

Ryan Schradin is the Executive Editor of GovSat Report. A communications expert and journalist with over a decade of experience, Ryan has edited and contributed to multiple popular online trade publications focused on government technology, satellite, unified communications and network infrastructure.