Oswald Boelcke was considered by many to be the first to broadly promote and teach the concept of situational awareness (SA). 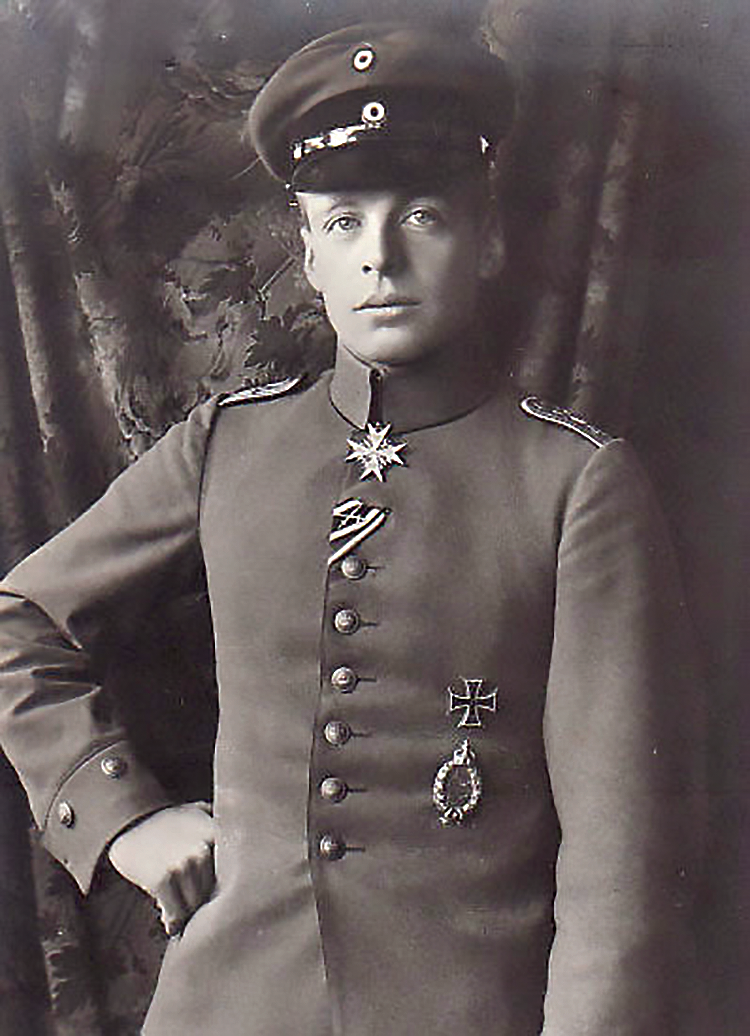 A German flying ace in World War I, he was one of the most influential tacticians of his day. He formalized his method, which he called the Dicta Boelcke, in a set of simple dogfighting tenets that others in his flying company then slavishly followed, including Manfred Von Richthofen, better known as The Red Baron.

Despite a quantum leap in technology and warfighting innovations since that era, many of Boelcke’s dictums remain valid today — especially this one: Always keep your eye on your opponent and never let yourself be deceived by ruses.

Keeping an eye on your adversary seems like obvious enough tactical advice. However, in a dog fight, losing sight of the adversary was easy — the advantage could shift to the foe if a pilot allowed himself to be distracted.

“Keep your eye on the enemy at all times, even if you think he is going down,” said Boelcke, “don’t be fooled.”

Pilots looking to escape from a losing fight sometimes would fake getting hit and attempt to simulate a death spiral. Boelcke urged squadron members to visually follow a spiraling plane down to the ground and, in some cases, land their plane and then go and search for the downed pilot. 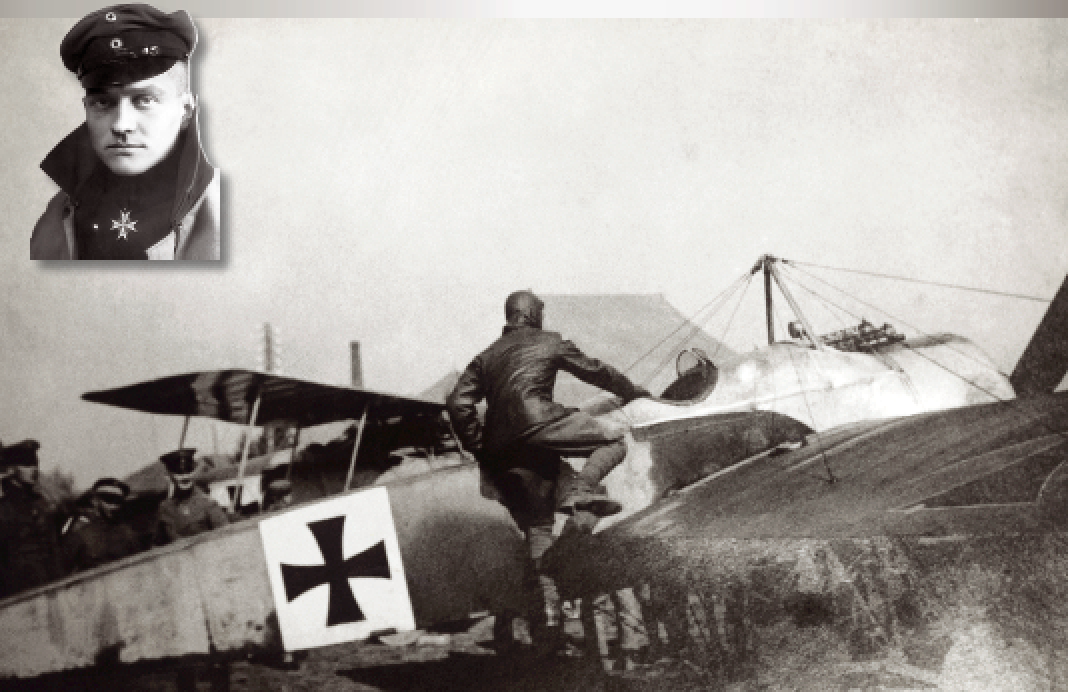 Always keeping your eye on your opponent and not being deceived by ruses is even more important and, arguably, even harder to accomplish these days, with the military theater extending across the globe and into space. Our eyes and ears have largely been replaced by sensors; ruses must be detected through machine learning and artificial intelligence. 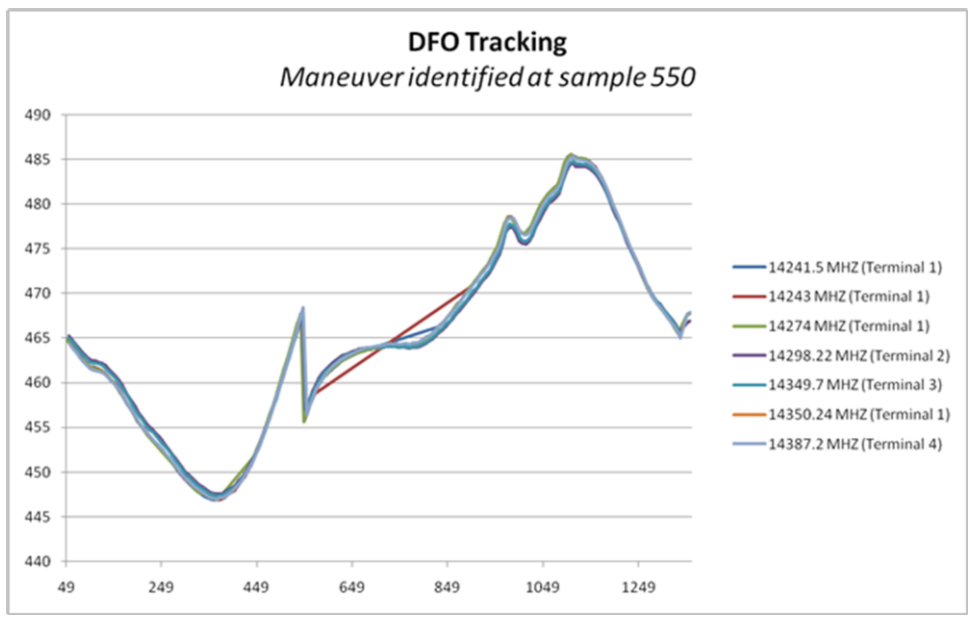 However, satellites maneuvering in geostationary orbit are typically beyond the detection of radar and go unseen by telescopes in the bright light of day. Another sensor technology increasingly used to augment and enhance our ability to monitor Resident Space Objects (RSOs) is Radio Frequency (RF) data — the electro-magnetic spectrum used by space systems to communicate — which can provide a wealth of information traditional methods are unable to accomplish.

Passive RF sensing and orbit determination supplies precision satellite location information without the need for transmissions from the ground to the satellite, satellite cooperation, specialized satellite payloads or detailed knowledge of ranging signal structures and definition.

Together, these RF measurements can be useful in satellite detection, tracking, identification and characterization operations. This includes attribution, differentiating close objects, custody, and gleaning maneuver/operational prediction information when other sensor types cannot “see” the object of interest.

Passive RF sensing helps fill the blind spots through the detection of maneuvers and anomalies, day or night and in all weather conditions. RF data also can characterize behaviors, indicating whether an unexpected maneuver represents adversarial intent, or merely drift caused by an onboard malfunction.

Aware of the Ruse
RF data improves current SSA capabilities by keeping an eye on RSO at all times, limiting the ability of the opponent to deceive.

• For example, satellite maneuvers can be detected in real-time and their location accurately identified in order to perform conjunction assessment, better inform collision avoidance and provide improved safety of flight.
• RF sensing data can also be used to characterize SATCOM transponder, payload and telemetry signals. By establishing a baseline of nominal or normal behavior of an active RSO, this can provide an indication when the satellite has deviated from its defined norm.
• Passive ranging and ephemeris generation can be accomplished by collecting and cross correlating RF signals at multiple ground antenna locations. The process is similar to the method GPS receivers utilize but in reverse. With each collection system calculating delay times from the transmitter, and using surveyed collection sites, the range and angles to the satellite can be determined and generate state vectors and accurate ephemeris on the RSO.

Detecting Hidden or Unseen Maneuvers
Kratos has been observing satellites in the RF domain for more than 20 years and, with the latest technology, the company’s global antenna and sensor network and the most experienced SSA specialists available, real-time identification of maneuver events can now be observed as satellites make small adjustments in station keeping or larger adjustments when changing orbital planes or other orbital parameters.

For example, the data that has been plotted in Figure 1 clearly reveals maneuvering as discontinuity in the Differential Frequency Offset (DFO) measurements. Frequency shifts can be and are observed on wideband satellite payload signals, L-band command and control signals. (Please see Figure 1) 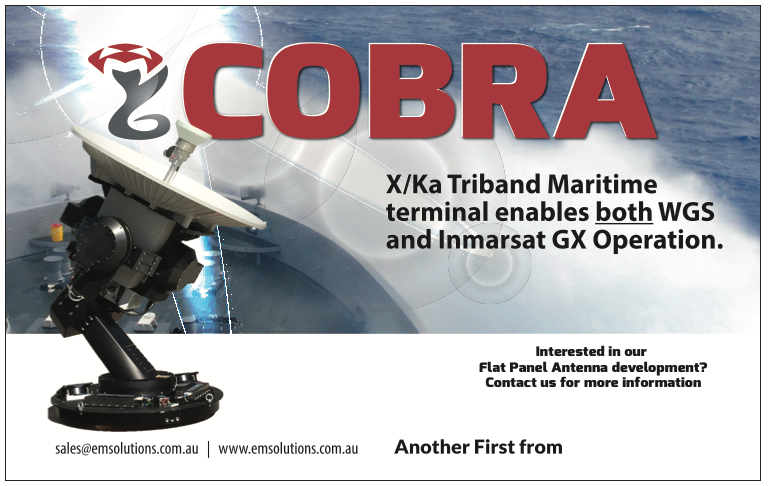 Maneuver detection is as paramount to situational awareness today as it was in Boelcke’s time, even if the theater of operation has exponentially expanded in size, scope and complexity.

Detecting Unexpected from Normal Events
By applying pattern recognition algorithms and machine learning the attributes of satellites can identified and characterized, maneuvers or actions predicted and intentions discerned.

These analytics and AI can establish the normal expected behaviors of space objects, such as routine station-keeping and the frequency of maneuvers, and by extension, detect atypical or unexpected deviations to provide pre-emptive threat awareness and improved space traffic management.

Know Your Opponent’s Intent
RF data signal characterization also can help determine the nature of an asset’s transmission, whether its mission, for example, supports video broadcast or UAV operations, and whether a large spike in bandwidth and upload of certain traffic type is an indication or warning.

One approach at classification involves the clustering of similar signals into groups and then organizing them in such a way where their common features cluster them together (Figure 2).

As shown above in Figure 2, the clustering of the spectrum access uses machine learning algorithms to uniquely identify and label RF channel accesses.

For example, if a particular type of unmanned aerial vehicle exhibits a particular RF signature, that signature can be decomposed into features (time, duration, center frequency, location, modulation type, etc.) and then labeled. Every occurrence of that label becomes searchable from a larger database of accesses. The additional patterns may be correlated to operations tempo, troop deployments, global crisis, or predicators to missile test events.

A New Era of RF Sensing
RF data has been in use for years to support space operations, from monitoring payload performance and usage, to detecting and geo-locating interference, and to supplement government monitoring networks. 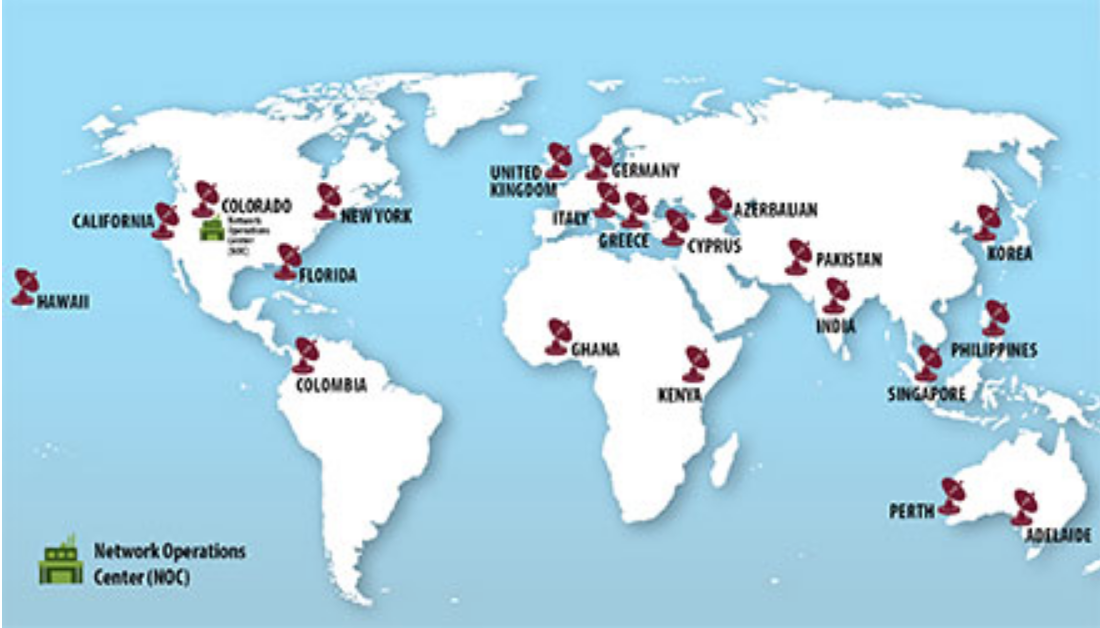 In theory, this data always held significant value for SSA, but in practice was not available at scale due to limited sensor coverage and spotty infrastructure. Now, with global monitoring available, RF data can be collected for the complete geostationary arc at all times, 24/7/365, providing unique insights that elude detection or characterization by traditional sensors.

This global network (see Figure 3) provides SATCOM monitoring and geolocation services to commercial and government users to detect terrestrial interference on SATCOM transponders, and to geolocate the source of the interference using two satellite geolocation techniques.

Kratos’ passive RF sensing network has worldwide locations, offering coverage with large geographic diversity between collection points. Each sensor site has access to network connectivity back to a datacenter or cloud network and is capable of highly accurate timed captures of digitized signals. 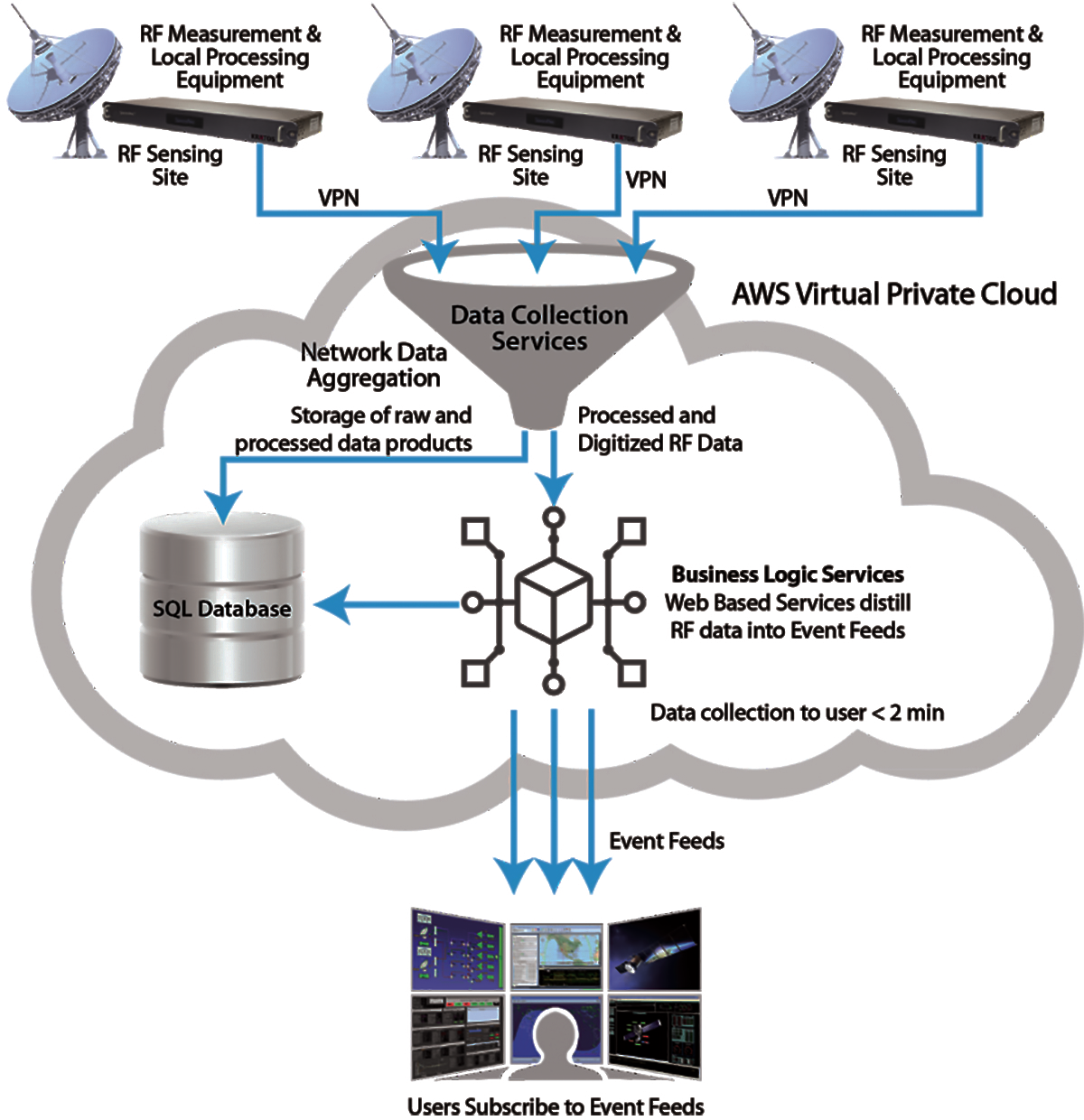 The majority of the passive RF SSA processing is performed in software using Virtual Machines that host a variety of software modems, data recorders, DSP algorithms for blind characterization, and Time Difference of Arrival and Frequency Difference of Arrival (TDOA/FDOA) measurement logic. Local processing handles the raw signal data. The conceptual architecture is shown in Figure 4.

Data aggregation and SSA processing is performed and information such as maneuver detection, passive ranging, and EMI are assessed and conveyed through event feeds. Data scientists can then extract useful information from this complex data.

Always-on, Wider Awareness
Early patterns of satellite interference detected from RF SSA can be correlated with other events, such as cyber disruptions and upticks in social media activity, as precursors to hostile actions by rogue nation-states.

Synthesizing RF-inclusive analytics with other data sources can provide decision-makers the real-time situational awareness they need to respond to a range of possible scenarios, from maneuvering to avert satellite collisions to deploying waveforms to counter an expected
RF attack.

Today, SSA is best assessed within a centralized network operations center, by someone at a console with access to the cloud. This delivers the ability to access and analyze all available information, from every possible resource and quickly share with decision-makers in near real time.

Although the technologies required are far beyond anything a World War I flying ace could imagine, Manfred Von Richthofen, Oswald Boelcke and others who first sought a battlefield advantage through the use of situational awareness would, no doubt, understand the ultimate purpose of all this – which is to gain an advantage, by having more situational awareness of an adversary than an adversary has of you.
www.kratosdefense.com/ssa